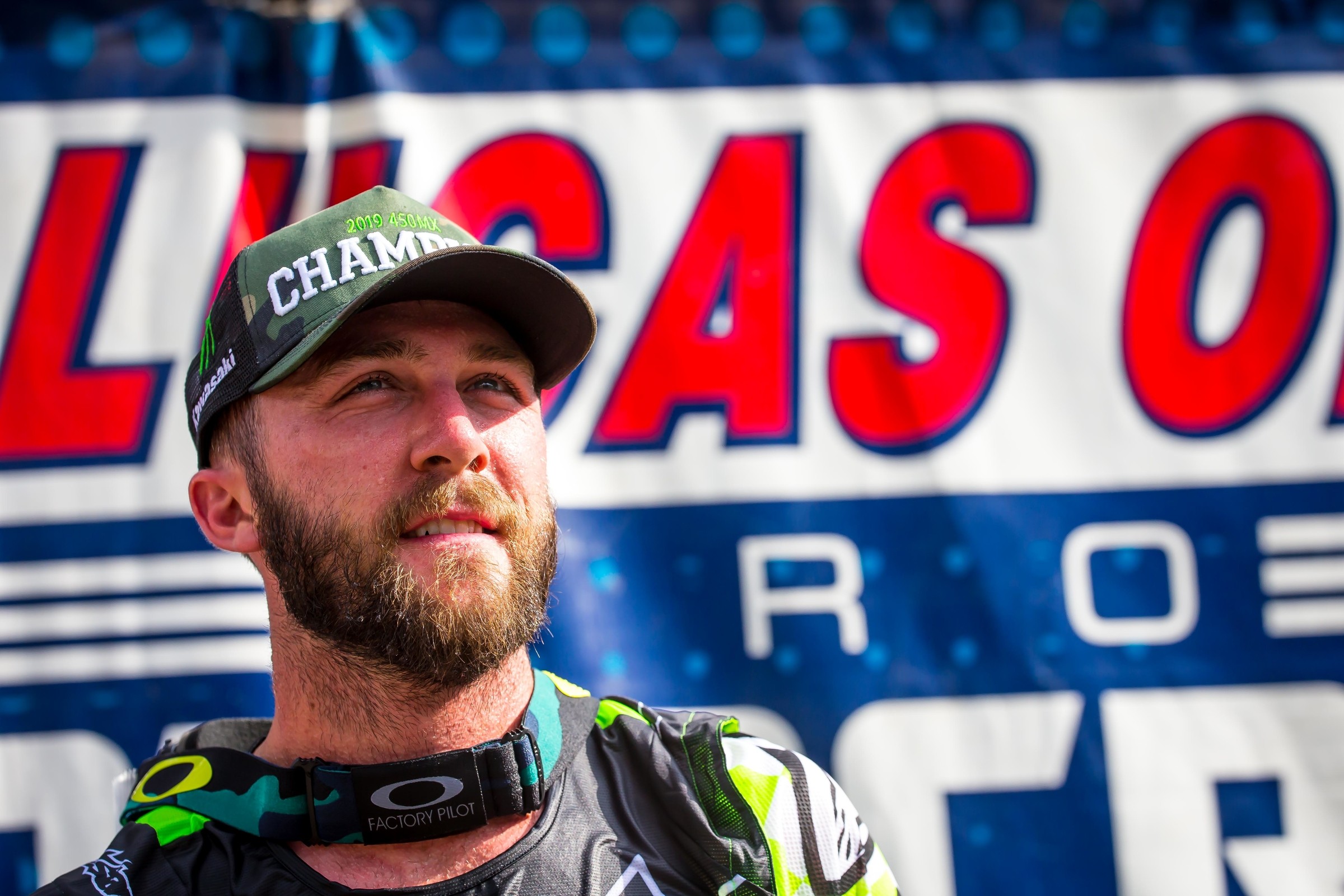 We’re fresh off the following moto scores for Monster Energy Kawasaki’s Eli Tomac at the last three races: 1-1-7-3-1-1. It again puts Tomac’s tendency to go “Extra Terrestrial” one weekend and then back to mere mortal under the microscope.

This time Eli has an explanation, saying he decided to be a hard-core ranch hand and repair some fence on Wednesday before Unadilla, blowing out his forearms with a fence pounder. So we at least have a reason for the first-moto Unadilla swoon, which is much better than thinking his just lost his edge for no real reason, and then going down the rabbit hole again of theories and hunches as to why. No matter, Eli is forever set against the highest of standards because when he’s on, he’s all-time.

But these are merely small problems in the grand scheme. In the big picture, Tomac’s run can only be defined by consistency, durability, and longevity. He has become just the fourth rider to ever nail three-straight titles in the premiere class of the Lucas Oil AMA Pro Motocross Championship (450 Class today), which is a testament to staying healthy, staying motivated, and staying in it to win it.

Here are the words of Kris Keefer in his column yesterday at PulpMX.com:

We can sit here and hammer on him when he gets a seventh place, but to me I think we are just dealing with an older Eli. He can manage a series better these days without throwing it all away in one moto for zero points. He took a seventh when he wasn’t “feeling” it and collected those points, but he also assumed his competition would have those days as well. They did! Gone are the unbeaten, dominating days of Ricky Carmichael and James Stewart, so just relax because we live in a different time now. Eli is as dominant as we get in this day and age. Eli will dominate a few weeks and then he will get beat, it’s the way of the world now people, so back off on him a little when he doesn’t win by 20 seconds. Eli has that perfect blend of bulldog as well as finesse riding that we have ever seen. It’s fun to witness.

Again, it’s hard to cement that reputation, because Tomac is forever followed by the shadow of 2015, when he totally dominated the first five motos of the season (his second in the premier class) before crashing out in the sixth moto (while leading again). That’s five seasons into the rear view, though. Over the last four, he hasn’t missed a single moto with injury, and while he hasn’t nailed down that Monster Energy AMA Supercross Championship yet, he has only missed one indoor race during this stretch due to injury. Add in this coming weekend’s Ironman National and you can total up four-straight years of the 29-race AMA schedule with just one race Tomac missed due to injury, which is 115 starts in 116 races. His overall injury history is pretty clean. The 2015 shoulder injuries were severe, but the rest of his career has only been dotted by pain: some shoulder troubles early in his 2014 450 rookie campaign both indoors and out, and the shoulder injury incurred while leading Anaheim 1 in 2018, which led to missing round two. He was back for round three the next weekend and won it.

Against his current peers, only Red Bull KTM’s Marvin Musquin comes close. Marvin missed one supercross in his rookie 2016 season with a wrist injury, and also coincidentally missed the same race Tomac did, Houston in 2018, when he crashed out of his heat race. So that’s two missed races since the start of ’16 for Marv. Blake Baggett will miss the final four races of 2019 with illness, he also missed time in 2016 with injuries indoors and out. Anyone else at this level has missed piles of time, starting of course with Ken Roczen, as well as Cooper Webb missing time in 2017 and 2018 (and now), Jason Anderson missing more than half of the outdoors rounds in ’17 and ’18, Zach Osborne missing races this year with shoulder problems (and most of outdoors last year in his 250 title defense), Justin Barcia missing races with hand and wrist problems, Cole Seely suffering huge injuries in supercross last year, Dean Wilson suffering through numerous knee and shoulder ailments.

With only Gary Jones, Tony DiStefano, and Ricky Carmichael also collecting the three-peat in the premier class, you realize how many all-time greats were not able to stay healthy for this sustained of a stretch. Yes, Ryan Dungey missed hardly any time throughout his career, but other paragons of consistency missed races. Chad Reed was a podium lock in supercross forever, but missed plenty of outdoor time with injuries and then a supercross-only deal. Ryan Villopoto left a potential three-peat on the operating room table thanks to a torn ACL in 2012 (he won the 2011 and 2013 450 outdoor titles. He even missed a few SX races in ’12 after wrapping the title). James Stewart only made all 24 motos on a 450 once.

Tomac’s odd finishes can be puzzling, but at least they're finishes! Since the start of the 2016 season, he’s made the gate over 99 percent of the time. So when discussing what it takes to be great and make the kind of history Tomac just did, remember this very critical factor first: attendance counts.