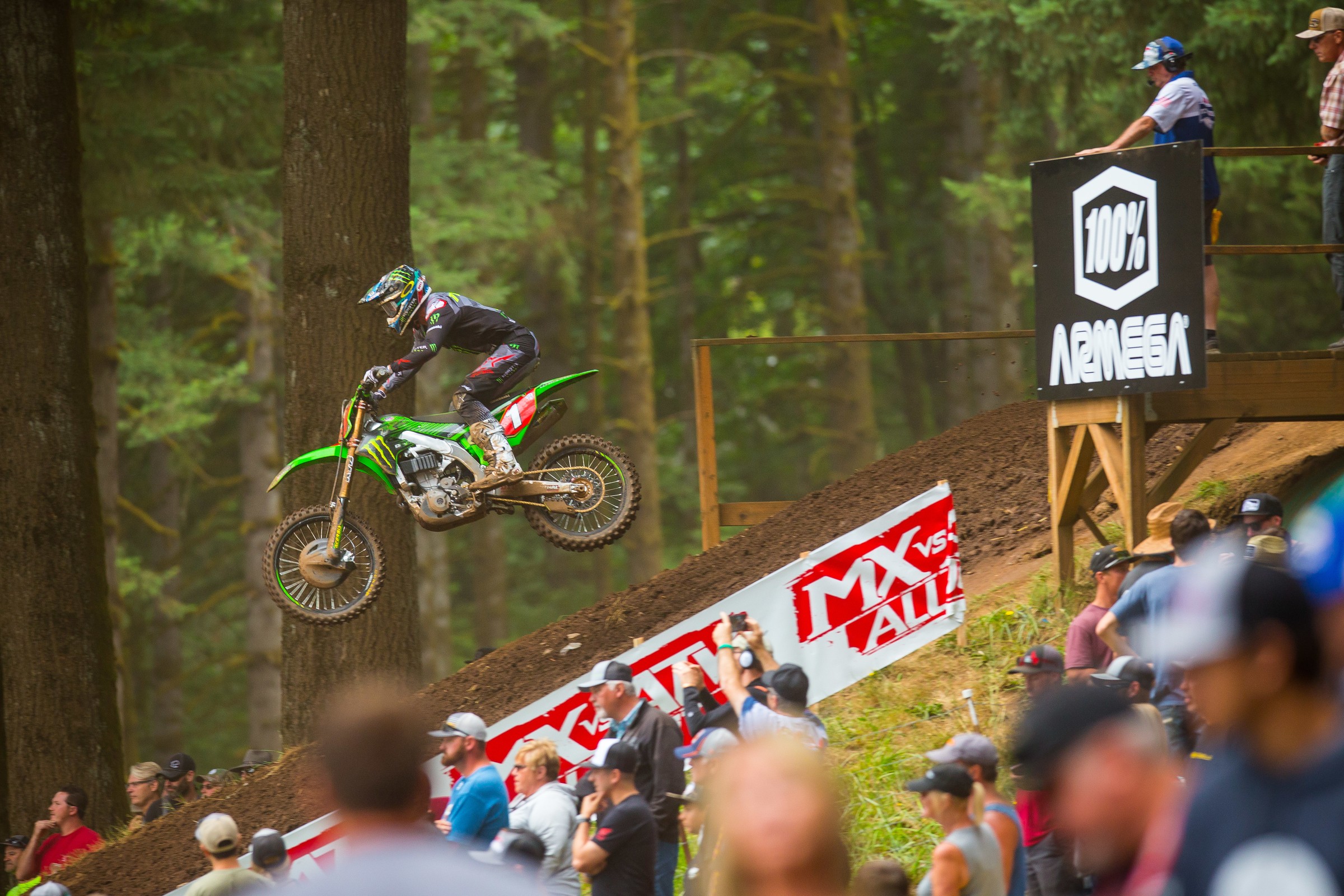 If you’re being honest, there’s probably a small part of you that likes it when Eli Tomac gets lackluster starts. That’s probably because you know that, if he’s firing on all cylinders, it’s going to be a thrill to watch him smash and slash his way to the front, just like he did at Washougal. At Washougal, Tomac revealed his real goal is to hold a 50-point lead on the competition by Budds Creek, so he can wrap this title up early. His lead is exactly 50 right now, so that means he’s going to fight like heck to beat Red Bull KTM’s Marvin Musquin (second in points) and prevent that gap from going back under that magic two-moto mark. Expect more aggressive riding this weekend! –Aaron Hansel

Or lack thereof, if you’re Aaron Plessinger in the first moto at Washougal. Just as the gate was about to drop Plessinger’s bike had a problem, which we were told was suspected to be a problem with the hydraulic clutch, and he was unable to race the moto. The DNS handed him 40th gate pick for the second moto, which isn’t ideal, especially on a track that’s hard to pass on, and Plessinger took 13th in the second moto. AP, last year’s Lucas Oil 250 Class Pro Motocross Champion, is still working his way back from an injury in supercross and hasn’t been able to run near the front yet. We’ll see if he gets a little closer at Unadilla. -Hansel

Washougal was a breakthrough of sorts for Monster Energy Kawasaki’s Joey Savatgy. At Washougal, Savatgy qualified third overall, he holeshot both motos, and he ended up going 6-6 for seventh on the day. Sure, he’s capable of better, but after the luck he’s had this summer going 6-6 probably feels like a huge breakthrough. If he can keep it rolling this weekend it’ll be a huge shot in the arm for Joey, who is still in negotiations to lock down a new deal for 2020. -Hansel

Dean Wilson hasn’t been making big waves since coming back from a shoulder injury suffered in supercross, but since his return at RedBud, his results have been steadily improving, with the best, a 7-10 for ninth overall, coming at Washougal. He’ll probably come back from the weekend off in better shape too, considering he wasn’t 100 percent when he jumped back into racing. If Wilson can get some decent starts look for the Rockstar Energy Husqvarna rider to persist with his upward climb. -Hansel

With 28 points between himself and Dylan Ferrandis, Monster Energy/Pro Circuit Kawasaki’s Adam Cianciarulo is in a fairly comfortable place heading into the homestretch. Of course, that doesn’t mean he’s going to be taking it easy either, as evidenced by the epic duel he and Ferrandis staged at Washougal. “I’m going to leave it all out there and look for everything, always. Every moto, from here on out,” Cianciarulo said afterward. You can bet the same is true of Ferrandis, too. If we’re lucky we’ll get to see more mind-blowing battling from the title rivals at Unadilla. -Hansel

With so little time left, taking a few points out of Cianciarulo’s lead here and there won’t be enough to get the championship job done for Ferrandis. In fact, he could even take eight points out of Cianciarulo, just like he did at Washougal, at each of the remaining races and still fall short of his goal. What Ferrandis needs is to win and have someone get between him and AC. But who? The obvious choices are Colt Nichols and Justin Cooper—they’re his teammates and both have the same magic motors that reliably propel the Monster Energy/Yamalube/Star Racing Yamaha bikes to the first turn before anyone else. Help could also come from guys like RJ Hampshire (GEICO Honda), Alex Martin (JGRMX/Yoshimura Suzuki), Michael Mosiman (Rockstar Energy Husqvarna), and Chase Sexton (GEICO Honda). We’ll see which, if any, of those riders are able to make this thing a little more stressful for the Monster Energy/Pro Circuit Kawasaki crew. -Hansel

Cameron McAdoo proved he was a great choice to serve as a replacement rider for Troy Lee Designs/Red Bull KTM by logging a career best, a 6-8 for seventh overall, at Washougal. Yes, he earned a seventh earlier this year at High Point, but it came via 8-7 moto scores, and he scored 27 points, versus the 28 he earned at Washougal. Clearly McAdoo is feeling good on his KTM, and with only a few more chances left in the season to get some attention for 2020, you can bet he’ll be giving it everything he has to improve and raise his stock. -Hansel

You will definitely enjoy watching Jett Lawrence’s pro debut this weekend at Unadilla, his riding style is incredibly smooth, basically Kevin Windham-like, plus, the kid has zero filter on the microphone. He’s hilarious! Jett is so young and carefree (he literally turned 16 on Wednesday) that those around him say he doesn’t even know what pressure is, which could serve him well when jumping into the deep end this weekend. This could really be fun to watch! –Jason Weigandt

Lawrence’s smooth but fun style was on display during Friday’s press day ride session. The recently-turned-16-year-old was throwing some big whips, riding some wheelies and showing us what he brings to the table. At the beginning of the session, he was practicing starts with Jo Shimoda and the two seemed to find one another a few times during the 30-minute session. It will be fun to see how they do against the rest of the field when the gate drops for the first 250 Class moto Saturday. Too bad Hunter, Jett’s brother (yeah, I said it that way because he’s sick of hearing it the other way! Okay not sick, but he told our Jason Weigandt last week that he gets it A LOT) isn’t able to race this weekend because it’s always fun to see some brotherly battles on the track. –MitchKendra

Technically, Jett is part of the GEICO Honda amateur program, dubbed Amsoil Honda, and he might try a few pro races but then go back to the amateurs next year (this is once-again legal now that the AMA has brought back the old Pro Sport rules system). Carson Mumford will also debut as a pro but stay under the Amsoil Honda banner. Jo Shimoda, though, is a full GEICO Honda pro starting this weekend. Originally of Japan, Jo’s been putting in the work here in the U.S. for years, all with a dream of succeeding in American professional racing. Does he have what it takes? The test starts this weekend. -Weigandt

Shimoda and Mumford both looked great in the riding session of press day. Shimoda, who is repping #374, was throwing huge whips off of the Sky Shot jump in front of the fans at the back section of the track and Mumford, who is repping #822, was crushing the turns of Unadilla MX. Not only does Shimoda have a different number this weekend than he did at Loretta Lynn’s, but the Japanese rider is also repping GEICO Honda graphics on his CRF250R because he is officially a member of the 250 roster moving forward. Although he’s got a new number and new graphics, is he still going to be “Smokin’ Jo” after this weekend? Mumford lead the pack of riders out of the starting area at the press day and looked solid throughout the session. Although his style might not stand out like Jett’s, Mumford has the ability to get going at a good speed—will he be able to show it tomorrow? –MitchKendra

Continuing with this massive debut of amateur talent, Jalek Swoll will be under the Rockstar Energy Husqvarna tent this weekend. He is this year’s AMA Nicky Hayden Horizon Award Winner from Loretta Lynn’s, but Swoll is about much more than that. He’s been an amateur front-runner for a long time, known for being solid and consistent, which is often the opposite of fast-but-crash young kids. Plus, Swoll’s Husqvarna squad is known for patience and loyalty, and his coach, Tim Ferry, was a master of consistency during his own career. Will Swoll come out firing or will he play the long game? -Weigandt

Because the Rockstar Energy Husqvarna wasn’t picked to participate in press day Friday, we didn’t get to see Swoll on the track with the other pro riders like we did with Lawrence, Shimoda, and Mumford. However, simply seeing his bike under the team tent with the rest of the factory Husky guys have us anticipating Saturday’s races (Note: The teams invited to take place in the Unadilla press day included: Honda HRC, GEICO Honda, Monster Energy Yamaha Factory Racing, and Monster Energy/Yamalube/Star Racing Yamaha). Swoll was fighting through an injury at Loretta Lynn’s, so we’re not sure yet how he feels physically heading into his first pro race. But one thing is for sure, the kid is ready for his first weekend of racing in the Lucas Oil AMA Pro Motocross Championship, as he told Weigandt last week—which you can read about here or listen to here. How will the #352 do in his debut? –MitchKendra