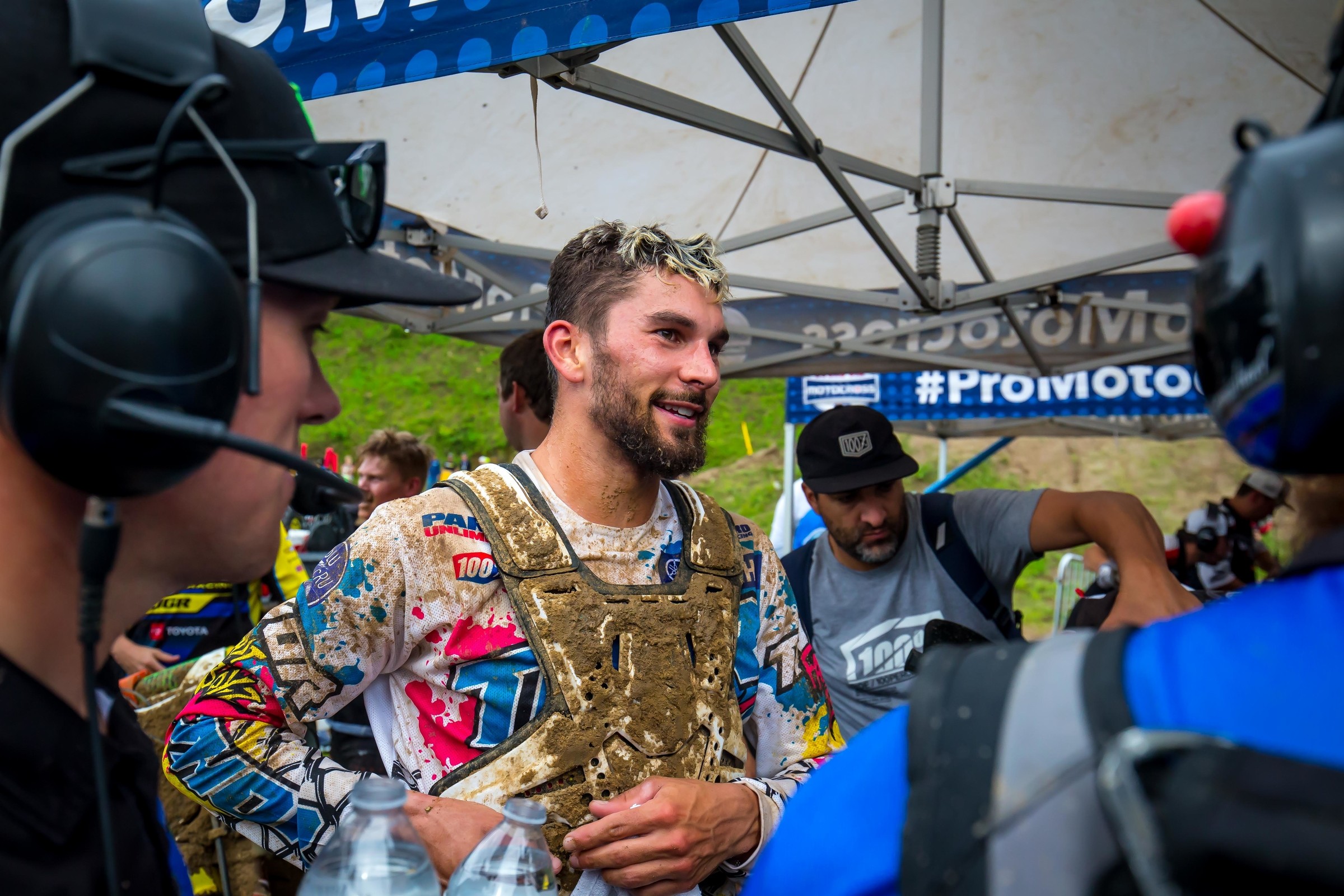 The last first-time winner in the premier class was MXGP Red Bull KTM’s Jeffrey Herlings, who finished 1-1 to win his first 450 Class overall in the Lucas Oil AMA Pro Motocross Championship on August 26, 2017.

Henry Miller finished fifth in the first 450 Class moto, a career best for the privateer. Miller finished 14th in the second moto to finish ninth overall, tying his best overall finish in the class with his ninth-place finish at the 2017 Southwick National where he finished 13-9.

John Short put together his best two moto finishes of his career back-to-back, finishing 6-8 for a career-best seventh overall.

Rocky Mountain ATV/MC-KTM-WPS’ Benny Bloss recorded his best moto finish of the season as well—a sixth in the second moto. He finished 16th in the first moto, giving the #29 tenth overall.

Adam Cianciarulo earned his sixth overall win of the 2019 Lucas Oil AMA Pro Motocross Championship by finishing third in the first moto and earning his sixth moto win of the championship. The Monster Energy/Pro Circuit Kawasaki rider leads the class in moto wins and now has a 36-point lead over Dylan Ferrandis, who finished 5-4 for fourth overall.

JGRMX/Yoshimura Suzuki Factory Racing’s Alex Martin earned his first overall podium of the year by finishing 2-3. This was the first time Martin had landed an overall podium since the 2018 Spring Creek National—364 days ago on July 21, 2018—when he finished 7-2 for third overall. It was also his fourth overall podium at his home track. Of course, Alex coulda shoulda woulda been on the podium at RedBud but his bike let go three laps from the finish of the first moto, while he was running third.

There’s no place like home! Pumped to grab a 2nd place Overall yesterday @scmxpark in front of the hometown crowd. Huge kudos to the @jgrmx @yoshimura_rd @suzukicycles crew for getting me to this point, felt so comfortable on the bike all day! #rideonsuzuki

GEICO Honda’s Hunter Lawrence led all 15 laps of the first 250 Class moto on Saturday to earn his second moto of the 2019 championship. According to his Instagram, the Australian wasn’t bothered either by the mud on the track or in the parking lot.

Gnarly weekend at Millville! 1-6 for 3rd overall we’ll take it, massive thanks to the whole team for their efforts in these crazy conditions! and just for the record i drove my front wheel drive rental out of the car park with no tow, push or assistance ?? #bigdeal #itsarentaldontbegentle #rentalcars #mirtztillithurtz #millvillewhoopmonster #millville #springcreekmx #rentalcarchampion

“I'm definitely not happy because the riding today was pretty good but the result is not what I wanted. I was looking forward to a good battle for the lead and to make up some points but that didn't happen. Next week is Washougal and we'll spend the week in California working with the team, so it will be good."

“It was a crazy day. The weather wasn’t on our side, at least for the first half of the day. We only had about 10 minutes of practice and then it was a waiting game for the motos. My first moto was terrible, so not much to say other than that. I didn’t have a good drive down the start straight and fell way back outside the top 15. Then right after the finish line, another rider went down in front of me and I was unable to avoid him so I went down too. I tried a new setting but just couldn’t get comfortable at all, so for the second race we switched back to my base setup, which is what I’m most familiar with. I hooked up great off the start and came around the first turn in second. Cooper [Webb] and I swapped back and forth a few times before I made the pass. I stayed in the lead for most the race but unfortunately got pretty tired those last few laps and he was able to get back by me. I tried to make a final charge on the last lap and we were right together across the finish, but I ended up second. It was good redemption from the first race, so I’m happy with how it ended.”

“Today was a rollercoaster but Ken turned it around for the second race and finished on a positive note. The conditions were terrible in that first moto; it was really muddy and he just struggled to get comfortable, especially after going down with that other rider after the first lap. I know Ken also had some issues with his goggles, getting mud behind his tear-offs, and it always sucks when your vision is impaired like that. We made some changes for that second moto and I think he redeemed the day. He was riding much more aggressively; it was definitely a big improvement.”

“This weekend was probably the roughest weekend I’ve had in a couple years. I ended up crashing a lot in both motos and it didn’t go my way at all, but I’m just going to move on and keep trying to be better.”

“Today just didn’t go my way. The track conditions were tough and I didn’t have the luck I needed. The main thing is we leave here healthy and will be prepared for Washougal next weekend.”

“It was a rough day. I was riding well out there considering the conditions, it was unfortunate I had an issue in the second moto. Things are improving each week and I am looking forward to Washougal and doing well there.”

“It was definitely one of my rougher days today. It was only my second race back but expectations were a lot higher because I had a really good couple weeks coming into this one. Overall, it was a really rough day but you just have to tough it out on your bad days and enjoy your good days.”

“I’m trying so hard to put two decent motos together but I’ve run into some unfortunate issues these last few weeks. In moto one, I did myself no favors with a poor start but was pleased with how we fought all the way up to eighth place. In moto two, I made a bad line selection in the back sand rollers and got my bike stuck in the mud. The Monster Energy Kawasaki team has been so supportive and continues to work with me so I can get back to the front where I belong."

“Yeah it was pretty sick. We got a good start, a holeshot, and in a mud race your race can go two ways, and obviously you want it to start with a holeshot. I’m pretty stoked on that, the team has been working really hard and continues to work to get an engine package better. I just tried to stay cool when I was up front. Second moto, [my] jump out of the gate was pretty good, I just hit a false neutral between second and third off the start, so I was way back. It was just stupid, to throw away a chance at the overall just a few feet out of the gate was just a punch in the gut. I tried to come back through but the other boys were on it. Put ourselves in a great position to win, but to watch it go away, it sucks. We’ll come back next weekend with no false neutrals.”

“It was a mess first moto but almost had my first holeshot, just went a little too wide and got stuck in some mud. Was running [in the] top five for most of the moto until I cross rutted off the Chadapult [jump] and went down. Ended up getting back into fifth until about three laps to go and my radiator got packed with mud. It got hot and I started losing some power, so I had to cruise it in. We did an engine swap for the second moto and didn’t have a good start. Was hard to pass then got hit pretty hard around half way and went down. Tough weekend.”

“This wasn’t how I pictured returning to the races, but you have to just go with what you got. Everyone had to face it today and I know I have the best team and the best bike to make it through. Even with the conditions, I still learned a lot and I’m hoping we can take that progress and get an even better result next weekend at Washougal.”

“It was nice being back at the races this weekend at Millville! Conditions were tough but I actually really enjoyed the track and just tried to embrace it. Qualified second in practice which was pretty good. First moto came from around 10th and got myself up to fourth. I was trying to run down third and my bike let go with three laps to go. In the second moto I didn’t have a great gate pick due to the DNF in the prior moto, so my start was not good, but I managed to get through the pack a bit…just to fall down on the second lap! I was buried deep in the pack, but was able to salvage a seventh out of it. Overall not a great day, but there are positives to take from it. I was happy with my speed and fitness just need to put myself in better positions! Back to work this week for Washougal!”

“I’m super stoked on my effort and my riding today. But I’m also disappointed in the results because I feel like they don’t reflect how I’m riding. I really want to get inside the top five in the championship and I know it’s not out of the question, so I’ll keep working!”

“It was a brutal day for everybody. It was super muddy in the first moto and I had a few little mistakes that ended up costing me. I’m looking forward to Washougal. My riding has been good, even though the results didn’t show today, but let’s bring it on.”

“Despite the results, I actually had a decent day at Millville. I finally felt like myself again in practice which felt good especially with the weather conditions. First moto, I had a mid-pack start and worked by way into the top 10 then I crashed, made my way back up to around 12th and my bike had a mechanical. That kind of weather is hard on any bike especially when you crash a couple times. Either way, I was pumped on my riding first moto. Second moto, I was running pretty good but again, had a crash and that one was pretty bad. Luckily, I was able to get up and kept going but it was too late in the moto to make many passes. Results were terrible but I felt better so I’ll take that as a positive.”

GIF OF THE WEEKEND, PT. II