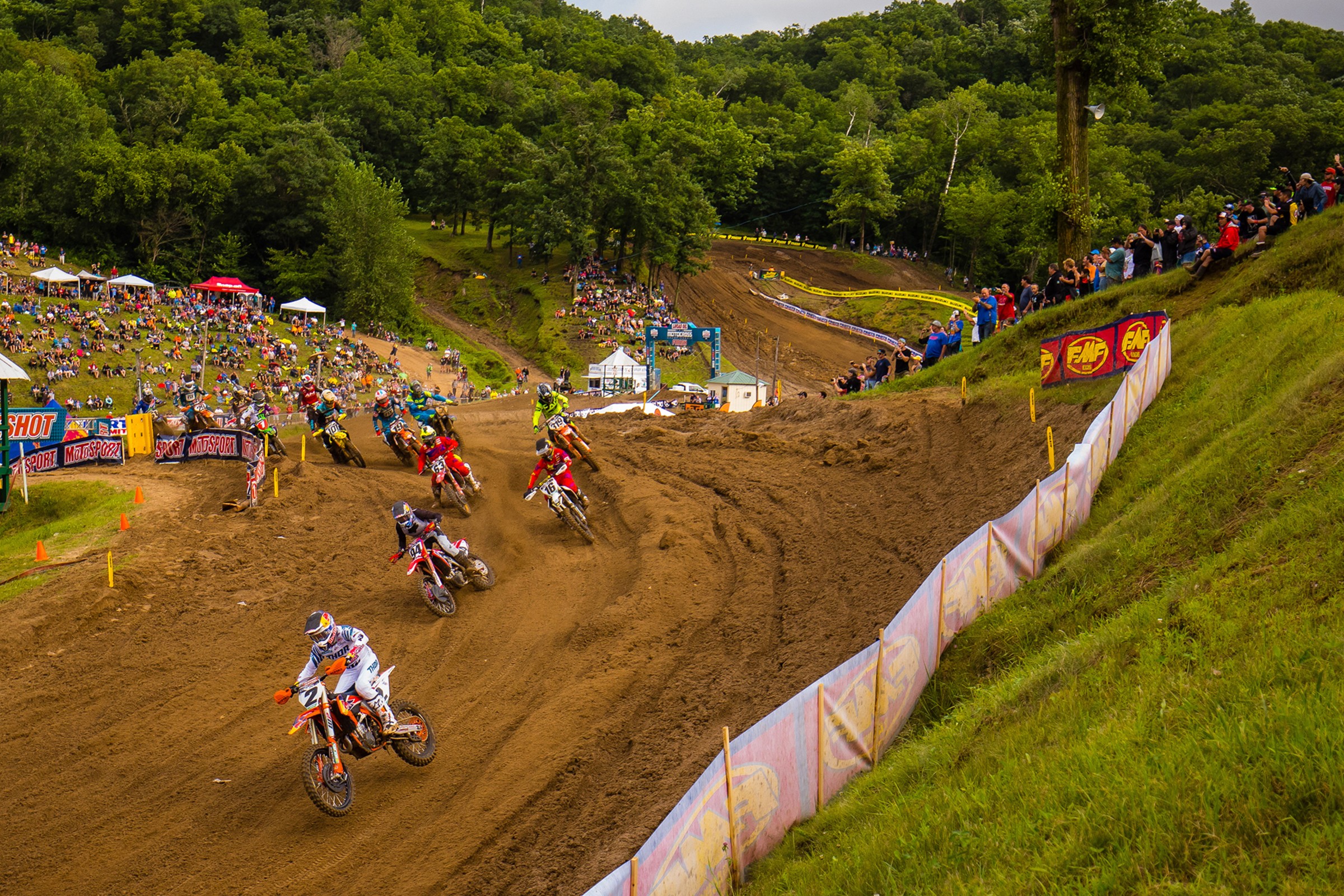 We’re once again firing off questions at long-time pro Jason Thomas for some opinions on the eighth round of the Lucas Oil AMA Pro Motocross Championship.

The track took on a ton of water in the morning but didn’t look too bad in the races. It was far trickier to ride than it looked, though. What’s it like to ride a somewhat-muddy track?
A track that’s in between mud and normal conditions can be the trickiest of all. A full mud race is slow and although difficult, most crashes are slow speed. As it dries, though, the speeds increase and jumps that normally wouldn’t be possible evolve into that dangerous “maybe” territory. The ruts start getting tackier and harder, meaning it’s tougher to just blitz through loose mud. The dirt starts to grab the front tire and catch unexpected traction. This “in between” track asks for riders to ride it as if it were dry, but the chances of a mistake are exponentially higher. It’s not a coincidence that we saw so many crashes on Saturday. To do well, a rider had to attack the track ride it aggressively. Attacking a track that’s rutty and offers inconsistent traction ups the ante for potential mishap. I would bet that even the riders who didn’t crash could tell you about countless close calls throughout the day.

How do riders adapt knowing the track will change significantly between each practice session and moto?
There are certainly some bike changes that can be made as the track dries. The rear tire is a big subject as riders will contemplate going away from the “scoop” tire and to something with better side knob traction. As the mud dries and sticks less, riders can also go a bit softer on their suspension settings. With a super muddy track, riders will often stiffen the suspension to account for the extra mud weight.

Another factor for me was the mental side. If a race was full mud, I almost let my guard down as far as intensity. Mud is a different animal and the pace is slow and plodding. As the track dries, that intensity needs to ramp back up. Mentally changing gears is important.

Several riders appeared to have good starts but plowed wide in the first turn (Ramy Alves, A-Mart). Hunter Lawrence and Adam Cianciarulo also went wide in a corner on the first lap. What are those conditions like and why does it make this stuff happen?
I think it was a by-product of mud being pushed off the track. The edges of the track were super soft and as riders came in hot, they lost control and instead of crashing, just blew through the mud under power. Had those guys tried to stay on the track exiting the first turn, they would have crashed 100 percent.

With Hunter and AC, I think the lack of a sighting lap was the biggest factor. With lots of track work being done, many parts of the track were a surprise on that first lap. Hunter went wide and up onto the wall and just failed to turn down early enough, sending him off the track. It looked like AC was simply following Hunter around and was thus subject to the same problem.

Tons of time gained and lost in this year’s Millville whoops. What made it so tough be consistent?
Just seeing how rutty and soft they were, it wasn’t difficult to understand why riders were so inconsistent. Each lap was different with new ruts forming and changing. With the dirt being so soft, just one lap of 40 riders going through could significantly change how the whoops looked for the next lap. Another big factor was the inability to regain momentum if it was lost early in the section. The dirt was heavy and penalized slowing on entry more than usual.

Cooper Webb said after moto one that he hoped it would get things rolling like his first win in supercross. It did. Talk about the difference in confidence.
It seems like we have been patiently waiting for Webb to arrive this summer. He has shown flashes of his best self, but this was the first time he had the whole package. He was fastest in qualifying and won both motos. It was a great day for him and although the championship might be too far gone, winning races is always a positive thing. I would not be surprised to see him win a couple more before we leave Ironman.

Surprised with Zacho’s performance?
I wasn’t that surprised to be honest. He was only off the bike for a week and in fitness terms, that’s nothing. The only question I had was would he be dealing with any pain and would his strength be up to the test on a brutal track. Once I saw him pushing forward in the first moto, I assumed he was good to go. He missed RedBud so it seemed like he was off the bike for a long time but when really examining the situation, it was just a bump in the road, thankfully. Please stay healthy for Assen, Wacko!

Signs of life for the Suzuki RM-Z250!
Whatever they figured out with the engine has paid huge dividends. Both A-Mart and Kyle Peters pulled top five starts in heavy, power-robbing mud. That start was demanding on engine torque, as was RedBud. I don’t know if they have the fastest engine in the class, that still would be Monster Energy/Yamalube/Star Yamaha, but they took a huge step forward. With their 250 success and Isaac Teasdale’s 450 holeshot, the RMArmy has clearly circled the wagons. Good for JGR/Yoshimura Suzuki. They badly needed a lift.

How do you rate Hunter Lawrence’s season?
It’s been peculiar, for sure. He is capable of winning motos, as he has done twice now, but he’s also capable of an off day that has him fighting for a top ten. This first season of Lucas Oil AMA Pro Motocross has undoubtedly been a learning experience. I fully expect him to be a title contender in 2020.

Thoughts on the A-Mart ruling in the second moto? There were several riders that accidentally did this throughout the day but A TON of guys followed Martin that time!
I was okay with it. There’s never going to be a perfect answer. He really pushed hard down that lane and was aggressively riding near flaggers and medics. That’s the line of demarcation for me. When off the track, how aggressive is the rider or do they let up and realize they can’t intentionally accelerate? It’s tough to say whether A-Mart would have been able to climb up to second place if he had gone slowly while off the track so he may have chosen the wisest option overall (excluding safety). One thing is for sure, going off the track has never been this scrutinized before.

How about those privateers in the 450 Class: Henry Miller, John Short, and Isaac Teasdale. Teasdale faded a little bit but Miller and Short were pretty strong all day: Miller finishing 5-14 for ninth overall and Short finishing 6-8 for seventh overall. What did you see from these guys that made their day’s so successful?
First and foremost, they got great starts. They avoided all of the first lap carnage and put in fast, clean laps. That created a huge gap to the mid-pack guys that they never relinquished. They also avoided the vision problems that bad starts cause, as well as muddy gloves and gear that make the motorcycle hard to hold on to. While everyone behind them was floundering around, they were near the front and riding issue-free laps. On a very one-lined track due to the rain, a good start is the most valuable advantage possible.

Who did you see take advantage of the mud the most? Was it one of the privateers mentioned above or someone else?
This has to be John Short with an honorable mention to Henry Miller’s first moto. Both riders nailed their start and then rode nearly mistake free. They didn’t have to deal with the drama and chaos that ensues as the pack of riders all bottleneck into every turn. I looked at two riders’ early laps for comparison.

Henry Miller was in second place for the first three laps. His lap times were 2:24, 2:24, and 2:26, respectively. He had a clear track and had the hammer down, a direct result of his great start.

Benny Bloss, on the other hand, was more in the middle of the pack and dealing with the bottlenecks and general melee of a poor start. Even then, he was only in 16th, which is reasonable. Still, there is so much waiting on that first lap if you’re buried. Waiting for riders to move, swerving around downed riders, and sometimes contact as everyone is in full panic. As a result, his first three laps were 2:32, 2:40, and finally a clean 2:25 on lap three.

The point here is that a superb start put Miller in position to open up a huge gap on Benny. The difference in a great start and an average start was 23 seconds in this case. Henry rode great, obviously, and deserved his fifth-place finish. If those who didn’t get the result they wanted simply look at the lap times of those up front and those in the back on those opening laps, it’s easy to understand why. Twenty-three seconds is an eternity to try to overcome and that was only going back to 16th place. Imagine those in the very back of the pack.

Fantasy killers? Fantasy winners? Did you fall into the trap and pick Joey Savatgy again?
Fantasy was a torturous, brutal affair for me on Saturday. It might have been my worst day ever. I am still not able to talk about it objectively. In both the first 250 moto and the final 450 moto, I had one rider finish in each. It’s not something I want to relive and my blood temperature is rising just from typing about it now. I didn’t pick Joey Savatgy but only because I had him in his DNF-DNF RedBud round. Christian Craig, Chase Sexton, and Mitchell Oldenburg all DNF’d moto one. That was really fun. Another highlight was Derek Kelley’s three laps total he put in on Saturday (another DNF-DNF). Aaron Plessinger’s huge crash in the second moto handed me another DNF, as did Taiki Koga’s engine failure. Keeping track? That makes six DNF’s on the day. Now I am mad again. Damn you for asking this question.