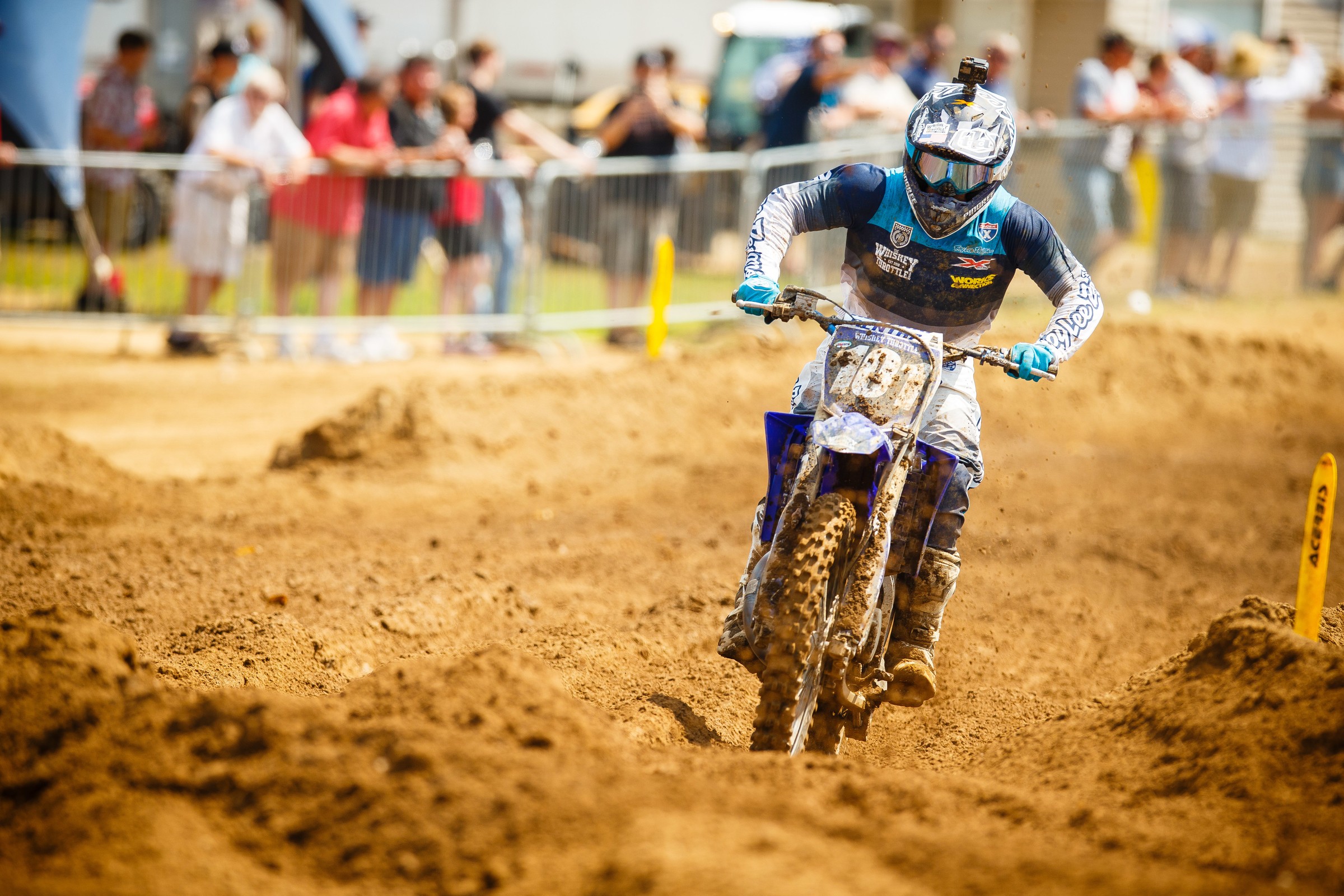 Hey man, thanks for the great article. I'm torn about how to ask this question. I mean, I love moto and I'm thankful for the television coverage of both the MX and SX series. No complaining here. But when I first started watching and racing dirt bikes, WE were on ESPN2. And WE've been kicked around to multiple channels—some that don't exist anymore. It seems now WE have a pretty stable home with NBCSN and MAVTV. But I can't help but always compare what ESPN will show over dirt bike racing. As I was blitzing through the TV menu screen, I couldn't believe what I saw on an ESPN channel… professional cornhole! This is the hard part. I love cornhole. After a few beers, I could smoke those dudes that never miss. But in a sober state, I can't think how cornhole has made it onto the most nationally recognized sports station on the TV. Do you think we can take our injured riders and have them form cornhole teams for some revenge exposure on ESPN? I think an injured MX rider kicking butt and taking names against pro cornholers in their prime should get us reconsidered for a place on ESPN!

Keep up the good work!
Jonathan

Revenge exposure? That’s a new one for me, but I’m all for it. In fact, I think we could get Jason Anderson to sponsor us and called it Team Fried Corholers; just to really rub it in when we win. Look, the thing you have to realize is that people are unimaginably stupid. Not you or I, or most motocross fans, obviously. But when lawn mower racing, curling, axe throwing, and CORNHOLE are getting top billing on the biggest sports network in the country, you can only assume that people are drunk and watching it ironically, or they have monumental learning disabilities after being dropped on their heads as children.

Hey, I love watching gaming contests [no, I don’t] and women’s basketball [not even a little, just being PC] as much as the next person, but putting those things in the same category of entertainment or athleticism as motocross is preposterous. Then again, most of us grew up sniffing race gas and contact cleaner, so maybe we’re the odd bunch?

Thanks for the insightful and funny answers every week. My question is do 61 year olds who race vintage bikes keep racing after knee replacement surgery? Do you know of anyone that does or the consequences of really messing up your knee if you fall or twist it? I have started racing vintage the last two years after 38 years of not racing. It still feels fantastic to line up and ride two motos. My right knee is just about done. I have had two surgeries previously. Any answers? Thanks!

You aren’t the only race fan with bum joints. The good news is that artificial joints keep getting better and better. In fact, some of the products are so new they don’t even have an estimated life span for them. The bad news is that if you get a knee replacement and you mess it up badly, there isn’t much recourse for orthopedic doctors. Depending on how badly you jacked it up, they could repair/replace it, or, worst case scenario, they remove your leg above the joint. I’m not trying to be melodramatic either; I have a friend with an artificial knee and he almost had to have his leg taken off. The first joint got infected and he had to have it removed and replaced with an antibiotic plug for several months. After they were sure the infection was gone, they put in another fake joint. This time the doctors told him that if it got infected, or went sideways for some other reason, there is a very real possibility that he would lose his leg.

So, you have to ask yourself just how much you love riding. I can’t give you that answer, you’ll have to make the decision for yourself. And some day down the road, I’m sure it is a choice I’ll have to make. I was told by my orthopedic when I was 25 that I had the knees of a 60-year-old man. Thanks, Doc… any other insults you’d like to hurl while you have me here? Maybe I have the testicles of a 90-year-old? Beaver teeth? Hamster hair? Don’t hold back, Doc… really give it to me straight.

I hope your knee holds out for you and best of luck when you do decide to have the procedure. Let me know how it works.

I just want to start by saying you are awesome. I have loved your columns (especially Ask Ping), bike builds, tests, etc. Now, you have taken life to the next level with The Whiskey Throttle Show. Every episode has been compelling. The Troy Lee episode may be one of the funniest pieces of entertainment in any genre. That had to be about one of the most fun days ever not spent on a dirt bike for you! You enabled the magic of Troy and Mitch Payton’s insane friendship to permeate all of our lives! I tell everyone I know to listen to that podcast.

Speaking of fun, these days as a dad-bodied firefighter and media mogul, if you had eight hours of free time with no family or household commitments, how would you spend it? Ergo, what is your favorite thing to do? And, if it does involve a bike, which one are you taking?

Thanks for all you do! You make a difference.
Old, fat, and washed up in Texas

Old, fat, and washed up,

Oh, stop it, you’re embarrassing me. I appreciate the kind words; I’ve found the things in life that I enjoy and I’m chasing them like a fat kid after an ice cream truck. I’m glad you enjoyed the Troy Stories episode; those tales had all of us laughing. My favorite part of these shows is that we all get a peek at what these guests are really like in person. Most of them have a persona at the races and they have a standard spiel down for any brief interview that the media hits them with. But with us they have more time to really let their guard down and be themselves. Beer helps, too.

The things I enjoy are mostly sports. So, on the rare occasion I get some time to myself, I’m doing whatever the season calls for. In the summer my favorite things to do are surf, Jet Ski, water ski, etc. In the winter I love to snow ski, mountain bike, moto, and trail ride. I’m fortunate with the Racer X job that I have a couple different bikes to choose from. This year I had a 250 two-stroke Husky that I loved, as well as a KX450. I’ve got some fun builds planned for a YZ125 and 250F next year, so those will likely be my go-to machines.

Thanks for the support, and I hope to see you at a show someday.