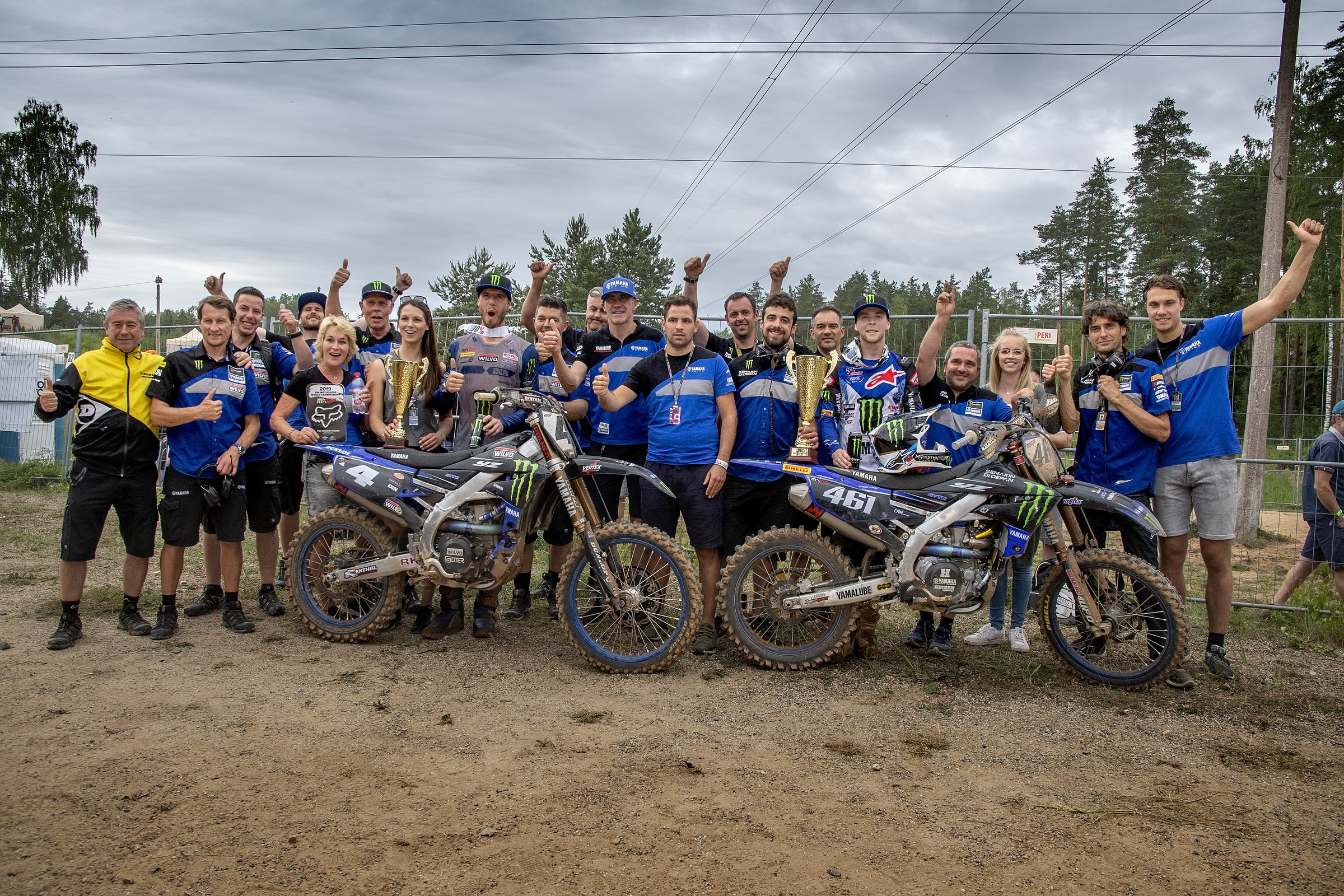 GP Report 3 Things Observed at the MXGP of Latvia

Round nine (of 18) of the FIM Motocross World Championship took place on Sunday in Kegums, Latvia. Honda HRC’s Tim Gajser went 6-1 to earn his fourth MXGP overall in a row, giving him five on the season, and Red Bull KTM’s Jorge Prado swept the MX2 class to earn his eighth win of 2019 in as many starts.

There must have been a moment late into the first MXGP moto when members of the defending world champion Red Bull KTM team were rubbing their hands together. Things were turning around. Jeffrey Herlings had recovered from a bizarre sighting lap crash to find his rhythm and then hold on for victory ahead of the in-form Monster Energy Wilvo Yamaha’s Arnaud Tonus (now four podiums in a row and counting). Herlings had claimed he was just “60-70 percent” fit after his right foot injury and only “four and a half months” into an estimated half-year period where medical experts predicted he would not be able to ride let along race. Latvia was his second appearance of the season and he was already seeing checkered flags in just his third moto. Some ten seconds behind, Tony Cairoli was in third place and dealing with the effects of the flu and some nerve complications in his right shoulder as a consequence of his qualification fall in Russia eight days previously.

So, 1-3 and a promising day, particularly with HRC’s Tim Gajser looking a little out of sorts across the bumpy terrain and the victim of two more jaw-dropping accidents on Saturday. Elsewhere the Rockstar Energy IceOne Husqvarnas of Arminas Jasikonis and Pauls Jonass were looming and the target of much local attention, and the fleet of Monster Energy Yamahas in the hands of Jeremy Seewer, Romain Febvre and Tonus were omnipresent.

Then from the very first moments after the first moto checkered flag, the orange illusion began to fade. Herlings could barely complete his TV interview through pain in the clearly reinjured right ankle. Immediate scans were devastating for the world champion. Herlings was packed and on his way back to the capital city of Riga while race bikes still revved at Kegums with a hairline fracture at the bottom of his tibia. Although not associated with the same multiple breaks that effectively wrecked his title defence back in January, it was another setback that might be as tough mentally as it is physically for the 24-year-old. As if to outline that 2019 is not to be his year (and is similar to the spate of bad luck and injuries of 2015) the accident occurred when Herlings was trying to pick up his KTM on the landing of a jump on the sighting lap and was clipped by an unsuspecting Jasikonis.

Herlings’ words on Saturday after also winning the qualification heat were eerily prophetic. “It is pretty crazy [his speed] with only four weeks on the bike but the track suits me here. Some riders complain, some don't but I actually really like it,” he said of the demands of Kegums that was flat, fast, and again—as in Russia—invited riders to explore the limits. “It was really technical, bumpy and choppy. I think it was okay but they need to work on the jumps often. I don't think the one last week was any better!”

“It would be a dream come true to stand on the podium,” he added. “I just want to go home healthy.”

Within two hours, Cairoli was also a visitor to the Medical Centre. The Sicilian lost control as he vied for a top-five slot, possibly due to the lack of strength or pain in his hand, and suffered a dislocated shoulder (unbelievably, for the first time in his Grand Prix career). Initially the bones and ligaments appeared to be relatively unscathed—so much so that the nine-times world champion was optimistically talking of attempting the German round the next weekend—but more will be known with more detailed scans early this week. There was a sizeable delay in being able to reinsert Cairoli’s shoulder, however. The biggest story is how this will impact his bid for a tenth championship, especially as Gajser was able to rally brilliantly in the second moto to claim his fifth overall of the year and fourth in a row. For Cairoli, who once had a sizable points lead of his own, the deficit now stands at 33 points in the championship.

“It was a difficult week and after the crash in Russia it got worse,” said Cairoli with his arm in a sling. “The track here is really nice and I like it…but it is also very demanding. On Saturday I had the flu and a fever and my arm was not as strong as I wanted.”

“The first moto was good. I could battle with the guys for the first position but then I got a bit tired and settled for third, which was good for the championship. Second moto: after half a lap I was fourth and trying to follow Tonus. I had quite a big crash and when I stood up I felt my shoulder was out. I asked the doctors to put it in so I could restart but it was the first time it had happened to me and in the end I did not have much choice [to continue]. I went to the medical centre to ask them to put it in…which made my day not one to remember.”

Gajser’s second moto earned the spoils as he tied on points with Febvre and Tonus—the Swiss native looking more and more like a Grand Prix winner every meeting. Props also for Belgian Jeremy Van Horebeek coming back to fitness and some form with fourth overall.

2. Does the bell toll for Olsen?

The spirit of Herlings in MX2 remains bright in the unbeatable form of Jorge Prado. The 18-year-old owned every session for his eighth GP win and seventh 1-1 from the nine rounds. The only blight on his scorecard is that absence at the British Grand Prix in March. From the 16 motos he has started, Prado has banked 15 and now has a 30-point window over Rockstar Energy Husqvarna’s Thomas Kjer Olsen.

Slightly sandy and very technical: Kegums was a playground for the Spaniard who is quickly becoming the most accomplished and confident rider in the FIM Motocross World Championship. Mentor Davide De Carli was even moved to state: “I think he has the best momentum of his career so far. This weekend was the best level of consistency I have seen from him.”

This was a tough result for Rockstar Energy Husqvarna’s Olsen to swallow. The Dane had ruled Kegums in 2017 and 2018 but had no answer to his rival. “It’s been a hugely positive GP, but also a little frustrating,” the likeable racer said. Olsen has claimed eight podiums this season and is keeping his hat in the ring courtesy of this regularity but should perhaps worry more about the growing persistency of Monster Energy Kemea’s Jago Geerts. The Belgian was again a lively presence and finished in the top three for the third time in a row.

Olsen took full profit of Prado’s training slip and brief shoulder injury to hoist the red plate in the opening rounds of the championship. At the moment not a single soul can trouble the world champion so TKO will have to continue to play the percentages.

It is easy to be dismissive of this race. Latvia was only established independence from the old USSR in 1991 and there is an assumption that motocross does not have much of a following in such a small country nestling on the edge of the Baltic Sea. The truth is that the state-funded event has prospered and entices fans and curiosity from neighbouring lands like Estonia and Lithuania.

Kegums has been a prominent and versatile circuit since it first hosted a grand prix in 2009. The fixture drew and spawned the nation’s first world champion and now first factory MXGP racer in Pauls Jonass. “It was amazing to see those guys ride and how fast they can go and now I am in the same class,” the 22-year-old said of his visits to Kegums growing up. “I hope some other kids here are watching now and are thinking the same as I did back then: I can be here too.”

A figure that raced in 2009 and recently toasted his 250th Grand Prix was the enduring Tanel Leok. The Estonian continues to compete in MXGP and has barely backed away from the barrelling and aggressive style that made him a desirable testing mule for the likes of Suzuki and Husqvarna and kept him on the world championship scene for almost two decades. “Time has gone quickly,” smiled the shy family man, “and for a 27-year-old it is not so bad!”

Jokes aside, Leok can still cut the fast laps. He has become part of the very fabric of the Latvian Grand Prix and since that inaugural edition in 2009 when he travelled as Tony Cairoli’s Yamaha teammate and the flags and support coated the venue like it was in the Leok’s backyard. Last weekend he finished 15th overall and ahead of factory Kawasaki and HRC riders.

“The seasons are long and you get tired and you think ‘am I too old?’ but then you are at home for two weeks and you don't know what to do!” he said on Saturday. “It’s crazy and maybe I’m a bit stupid but I just want to continue riding.”

Leok also commented on his remarkable rate of Monster Energy FIM Motocross of Nations appearances that look set to hit 19 for his country if he can make the September date at Assen. “My first Nations was in 2001 in Namur [Belgium] as a 16-year-old,” he remembers. “It was really special; the tree roots were sticking out and it was slippery and raining! Eighteen times now…and it is amazing to still be selected by Estonia. I think we have been in the top ten around 15 times and for a small country like this it is pretty amazing.”