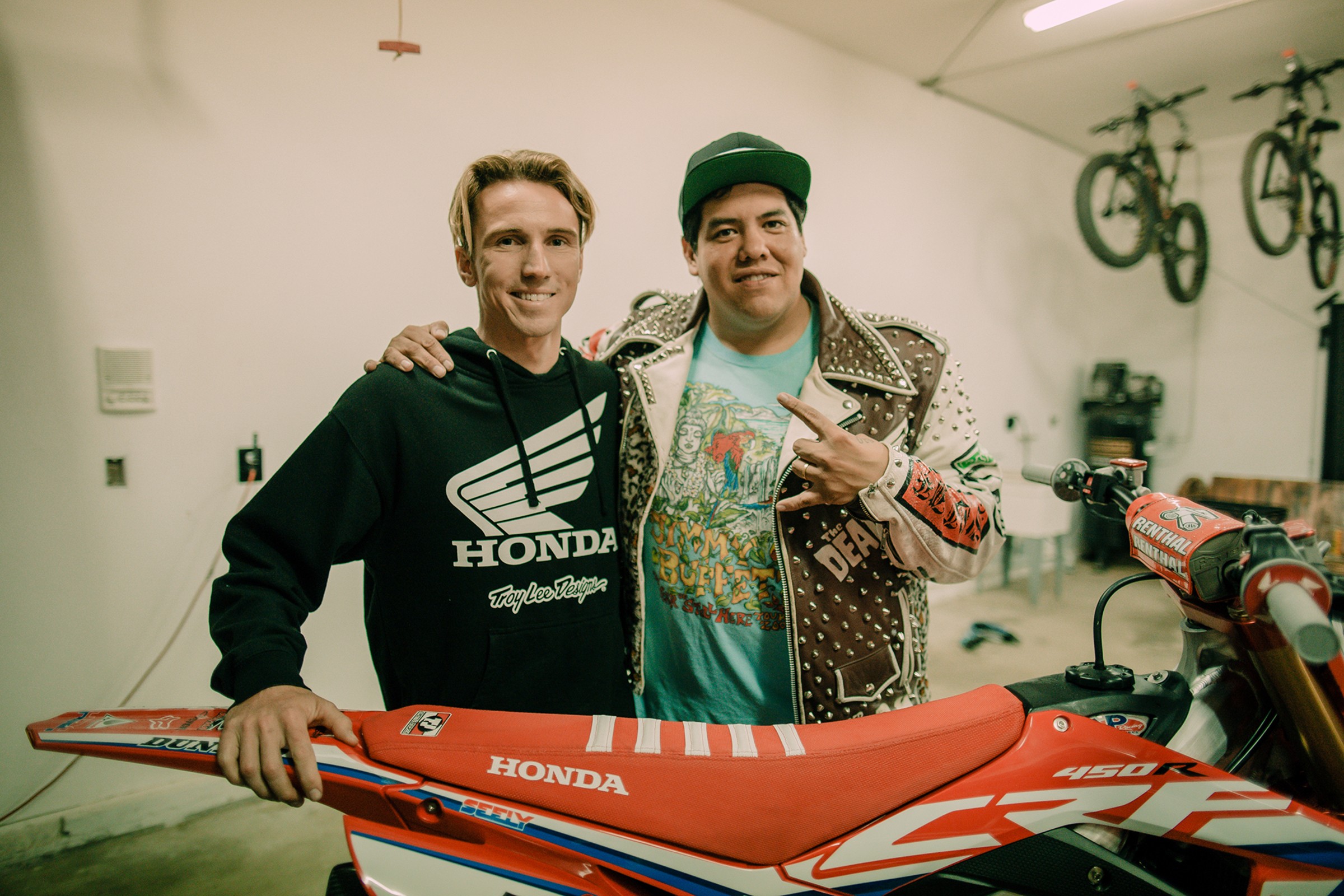 Everyone has heard of the band Sublime and if you’re a fan of the group you’ve also heard of Sublime with Rome, the band’s current version that’s fronted by Rome Ramirez. In anticipation to the release of their latest album, Blessings, which dropped on May 31, the band has released a single, “Light On,” which has a music video featuring none other than Honda HRC’s Cole Seely.

The intrigue factor was through the roof when we caught wind of this and we knew we had to know more, which prompted us to get in touch with Ramirez to learn more about how the band hooked up with Seely, the video itself, and the upcoming album and tour.

Racer X: Let’s start off by talking about the new track, “Light On.” What’s the meaning to and inspiration behind it?
Rome Ramirez: The song is basically about the sacrifices you make for doing something that makes you happy. It was written for family. That’s what I really wanted to convey lyrically. A lot of us who are doing something that takes a lot of work, it’ almost seems impenetrable. It takes that kind of commitment. Living that heartbreak, working all the time and maintaining. Working, maintaining, growing. It comes at the expense of being with your loved ones. That’s what the song is about.

That makes sense, and it sounds an awful lot like what a lot of pro racers say. They’re on the road a lot and that crossover is interesting.
That’s how it came about. My brother, Dreas [Ramirez], who’s doing the music video with us, we didn’t want to make it a super sob story. Lyrically you could go there, and all the treatments we were getting were kind of going that route. We wanted to kind of flip it on its head and tell that story, and how committing to a sport is the same way. We’d done a video based around a skateboarding narrative eight years ago, and surfing kind of seemed a little obvious. Motocross just seemed so badass. Troy Lee is a really close friend of ours and we always end up hanging out over there. Eric [Wilson] and Carlos [Verdugo], they have a really good connection with riding bikes and motocross. For us, it seemed so sick to throw some light on something that’s really similar.

So being friends with Troy Lee, is that how the connection with Cole Seely came about?
It was completely separate. My brother was like, "Dude, you have to check out some of these riders, they’re like the fire-est dudes in the game." We were with Troy at the time at dinner with my manager, and I was like, "Look at this guy, he’s f****** crazy!" Troy was like, "That’s my boy right there, that’s Cole." It was like, what the hell? We hit up Cole thinking he’d be like, "Yeah right. I’m super busy." But he was so f****** cool. He was so down to Earth. He was like, "Yeah man, whatever you guys want. You can come over to my spot and shoot there, or I can head over to whatever shoot you guys want to do." It came together so naturally. It was so cool.

It’s amazing how down to Earth most of these guys are. They’re on top of their sport and race in front of 60,000 people on the weekend but they’re just totally cool.
Yeah, it’s just insane how they can  just turn it on, turn it off. Especially someone like him, who’s so successful and a decorated racer.

So what was it like working with Cole?
What we did, with the video, we wanted to paint the picture lyrically of a rider and how similar it is to someone in a band. You’re constantly on the road, even if you’re winning, killing it, bringing home trophies, it’s still at the detriment of the relationships around him. His girlfriend [Danielle] is actually in the video as well, so there was a really good bond and chemistry. It just mirrors the lyrical theme of the song and it shows some badass footage of him doing some crazy stuff on ESPN, and it has some stuff of him on his track, of him at home, it’s kind of like chronicling his entire journey.

How long has motocross held your interest?
Ever since I was a kid. My mom’s side of the family is from Fallbrook, which is right next to Temecula. Motocross is huge there, it’s full of enthusiasts. It was always around, but when I’d go back up north to Oakland, where I’m from, it was zero. Nobody f****** rode motorcycles. Nobody was on motorcycles period, let alone dirt bikes. It was always back to skateboarding, not going out to the desert with the homies and riding. The lifestyle is very similar to the band lifestyle. Even aside from the lyrical content. More so on the lifestyle concept—being outside with your homies, listening to music, and having a good time under the sun. It’s like the same shit.

You had the new album come out, Blessings, on May 31. Talk about the meaning behind that title. You’ve been at this for a decade now. Is there a tie-in there?
Yeah, 100 percent. We’ve been at it for ten years, and we’re still able to do this. We’re going on our biggest tour ever this year and we’re ten years in. That’s just insane, and we’re really thankful for that. I don’t know if any of us were thinking we’d continue doing this for this long, yet here we are. It’s changed everyone’s life for the better, and it’s crazy how much has spawned from this. Because of all that time, because of the success the band has brought us, it’s continued to bless us and other people’s lives as well. This family, our crew, the friends we’ve met from being on the road, our wives, our kids, it’s crazy how this movement that started with Brad [Nowell] and Eric [Wilson] back in 1988 has continued. It’s almost like, the legacy of The Grateful Dead or something. It’s continued to live on, grow, and give birth to a genre. It just continues to live on like a force, and we’re just blessed to be a part of that and to be part of that growth. It’s a blessing.

It’s so cool that you think of it that way. The public’s perception of bands might not necessarily be like that, so it’s cool to hear you talk about being thankful.
Oh dude, thank you, man. It’s really hard not to. I really stepped into such an amazing position, and I was very fortunate to have been prepared to work and run with that, and more so just to be in that scenario where I could meet my favorite band, let alone in two years get to start singing for them. From a macro perspective, it is quite marvelous and I feel very lucky.

What can fans expect with the album?
It sounds way different than anything we’ve done. It just sounds really big. The tones on the album are really rich—the lows are low and the highs are high. Lyrically, there’s just this theme of narrating the entire ten years, 13-year journey really, from when I met Eric. Sonically, we were just able to create a sonic bed underneath the lyrics that doesn’t get boring. No songs sound the same. It took us probably like four years to make this album, but it was worth it.

I read that when you first started recording you came into the studio without anything in mind. Is that [the album] a product of coming into the studio empty-handed?
That’s a product of just being on the road like crazy. We’d been on the road for a while touring the world and stuff, and we’re grateful for that. Never say no. If people want to see you, that’s what we do, that’s our job. Get in the studio, then go on the road and play it. Staying at home and going golfing isn’t part of the f****** job, and we know that. It’s the whole reason Eric wanted to start the band—he was bored being at home. We definitely stay on the road a lot and getting into the studio right off the road, for us, it’s not a great recipe for creativity. You need some time to reflect.