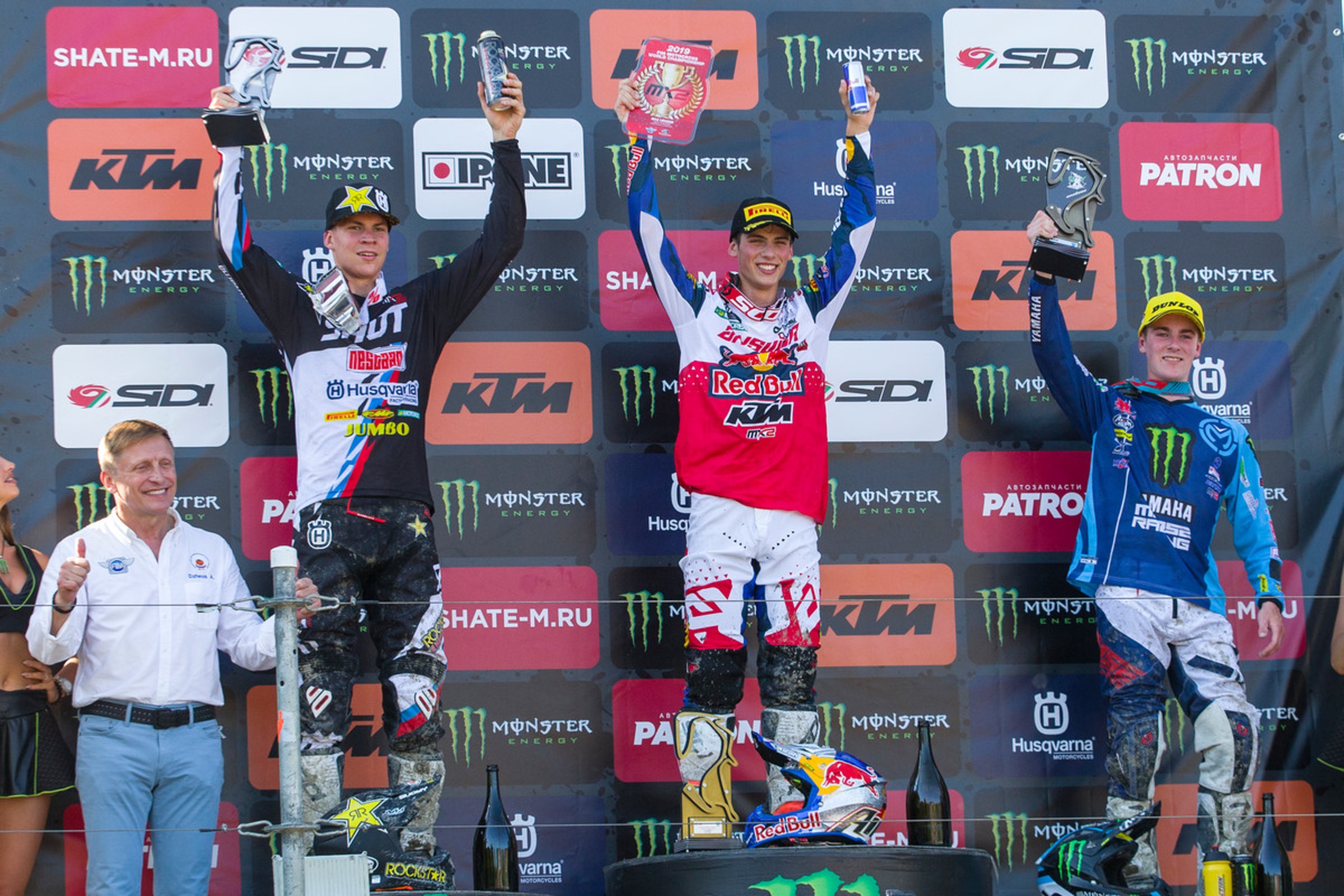 GP Report 3 Things We Learned at the MXGP of Russia

MXGP was afforded a breather after the Italy/Portugal/France triple and before another trio of air mile collection with trips to Russia, Latvia, and Germany. The fixture in Orlyonok was first-up for round eight of 18 and although Honda HRC’s Tim Gajser and Red Bull KTM’s Jorge Prado remained the steadfast winners in both MXGP and MX2 for three events and counting (in Prado’s case every round he’s contested this year) there were some other talking points from the third visit to the scenic circuit adjacent to the rocky beaches of the Black Sea.

1. The pendulum continues to swing

“Not easy motos but it was such a good feeling. I’m so happy, just three races ago I was 40 points behind [Antonio] Cairoli and now I have the red plate. The bike is just amazing.” Tim Gajser summed up the situation perfectly.

His performances in Portugal and France while Red Bull KTM’s Antonio Cairoli uncharacteristically faltered were extended in Russia for—what TV commentator Paul Malin revealed—as the manufacturer’s first ever GP success in the country. Gajser was superb for what was perhaps his best set of races in 2019 as Cairoli had again erred.

This time on Saturday with a crash on the steep downhill section during qualifying, leaving the 33-year-old winded and stranded in 25th position in the gate. The Sicilian was stuck near the rear of a train of riders in the first moto and his durability was rewarded with 12th. He made a better fist of the second race and salvaged decent points in fourth. Gajser’s results made for bad reading for the nine-time world champion but the Slovenian had to work for his pay. The difficulty of overtaking at Orlyonok was highlighted when he laboured to pass Standing Construct KTM’s Glenn Coldenhoff and then defended his lines admirably while in the lead from Monster Energy Wilvo Yamaha’s Arnaud Tonus.

Gajser had the red plate for the first time in 2019 after the first moto and that 40-point deficit became a distant memory with a 13-point favour in the black as the paddock hurriedly packed up on Sunday night.

“Tim Gajser is strong and in good shape but these are two tracks [France and Russia] where we struggle a lot each year,” said Cairoli. “I’m confident we can try to gain some good points again.”

In MX2 Rockstar Energy Husqvarna’s Thomas Kjer Olsen seemed to have finally unlocked the key to beating Prado in the first moto.

“I felt good all weekend and the small changes on the bike for the hard-pack worked really well,” the Dane said. “It helped me out a lot to get in the top five and lead some laps.”

It was not to be. Prado was in unchartered territory with a start outside the top ten, however he barrelled back to pass his main title rival with two laps to go. One defeat with 20 motos still to go is not cause for alarm but if Olsen cannot work some magic in Latvia next week (scene of his wins in 2017 and 2018) then it is hard to see how he can up his game to bring some heat on Prado’s title defense.

Elsewhere, adding a T is the only difference between onus and Tonus. The momentum is still very much with the Swiss Yamaha man in his career renaissance (arguably the highlight) with a third podium result in a row and after missing the entire 2018 season with a shoulder injury. Trophies in Portugal and France had imbued the former Pro Circuit rider with confidence, and he chased the overall garland in the second moto. A mistake on the inside of a downhill right switchback while feverishly looking for a spot to attack Gajser proved costly but his 2-2 was nevertheless heartening and embellished his competitiveness.

“It was amazing to fight for the win,” the friendly Swiss said. “I had some good starts and could keep close to Tim. I’m happy I went for it anyway.”

Asked whether he could have foreseen his slew of silverware, Tonus was quick to smile again. “Not really, I was 15th overall in Mantova [round five] so how could you expect to then be three times on the box?! I’ve always worked for this to happen and I’ve felt that I’ve had it in me, but it takes a lot to do it. I had to be very patient, but I am very thankful. We’re into summer now so there will be some tough races with the heat coming up. I’m just enjoying my racing.”

Brand mate and countryman Jeremy Seewer made it two Swiss riders on the box for what was a landmark for both the factory Yamaha man in his second MXGP term and his country in the history of premier class Grand Prix racing. The former MX2 runner-up (and a victim of the factory Suzuki team’s implosion meaning a late switch to Yamaha for his debut campaign in 2018) was the ninth different rider to have invaded the winner’s circle in 2019 and converted his top five speed into a small milestone.

“It feels like it is much harder to get here, much harder that even some of my MX2 wins,” he revealed. “There are a lot of fast guys and especially on a track like we had today where there are a lot of guys riding a similar speed. With what happened with my MX2 career and how I came here, it I felt like it has taken time to set-up the 450, make it work and be on the box. For a few weeks I have been feeling good. It feels like we are going into a good direction.”

A brilliant and often undervalued element of the FIM Motocross World Championship is the celebration of the series by the various countries and cultures that it visits. The teams and riders were astonished by a vast theatrical demonstration by hundreds of kids and locals in Orlyonok by way of an opening ceremony that added a real sense of significance to the occasion. It was obvious that MXGP and an international series was in town, and the interaction between fans and the public gave the Grand Prix a buzz before a wheel had even turned. This is not always the norm for a niche sport.

This year was the third stop at Orlyonok after an epic mudder in 2017 and a hot affair in 2018, both won by Monster Energy Kawasaki’s Clement Desalle. The sunshine was again in place for this fixture and the weather had a critical effect on the speed and state of the Russian hard-pack. The track invited riders to push and take risks— especially for overtaking around the curling layout—but then bit savagely with some jaw-dropping and worrying crashes.

“You could see it was going to be a tough day but it developed okay,” evaluated Prado after he’d take a fourth MX2 pole. “The ruts were good but still so hard underneath.”

Spills for Gautier Paulin, Alessandro Lupino, and Desalle—both of the latter requiring hospitalisation, Lupino with a back problem and Desalle with a broken leg—were alarming and Britain’s Ben Watson was lucky to escape unscathed after a high-speed slip on the finish line take-off on Saturday. It felt like there was a roulette element to the motos, and a decent start was essential due to the frugality of overtaking opportunities combined with similarity of lap-times (just two seconds separating the top 12 in the first moto). Injury-cursed native hope Evgeny Bobryshev was competing with the prospect of wrist surgery on the horizon but had to be helped off the track early in the first race with a broken right leg providing another concern for the luckless former HRC man.

Prado’s rise from the depths of the top ten to first place was an example of how the conditions could be tackled (“but it took me the whole moto,” he said) and Gajser was the perfect picture of daring restraint. Otherwise it felt like the attrition was particularly harsh this weekend.

The contrast of MXGP will be seen again in a matter of days. The soft, sandy layer of the largely flat Kegums circuit is a regular part of MXGP and has been for over ten years. Motocross is not new to the location or the city of Riga, but the track is a departure from the calculation that was necessary in Russia.

It was hard to ignore that number 84. World Champion Jeffrey Herlings benefitted from four weeks of slowing building-up bike time and two domestic race events in the Netherlands and Austria to prepare for his first Grand Prix of the year and since multiple breaks in his right foot forced reparatory surgery at the end of January.

The Dutchman flew all the way to Russia to finally ignite his season as reigning #1 and with designs on a finish between fifth and tenth. He managed fourth overall at the only circuit where he was beaten in 2018.

“Such a long time off the bike and then a short time on the bike— it’s normal,” he said on Saturday of being below par and having to catch-up to his peers. “These are the best in the world. I don’t want to crash my brains out and want to work my way up. There is nothing to race for this year when it comes to the championship so it is important to be smart and hopefully be back winning again by the end of the season. I’m taking my time.”

Herlings was good to his word with a 4-7 and by measuring risk.

The Grand Prix of Latvia up next was the scene of his first MXGP win in 2017 and might have been a more fitting place to rediscover the competition but the KTM man can now have a more ambitious view toward Kegums even if he is publicly dampening expectations.

“Latvia would have been better but I wanted to be back, and I would have been training this weekend anyway,” he said in Orlyonok. “KTM wanted me back racing as well so better to use it [this GP]. I need to get the race rhythm. I can guarantee I will be back up there sooner or later.”

American presence was reenergised by the increased prominence of Bike It Dixon Racing’s Darian Sanayei and Mitchell Harrison on the Bud Racing Kawasaki. Sanayei, in particular, starting well and running at the front until the lingering effects of Epstein-Barr were clearly still obvious. The KX250 rider had around 15 minutes of pure speed before he was powerless to resist his MX2 rivals. A 6-18 was both encouraging and frustrating: showcasing his potential if fully fit. Sanayei still hasn't been able to train or prepare since becoming struck down and ages-out of MX2 this year.