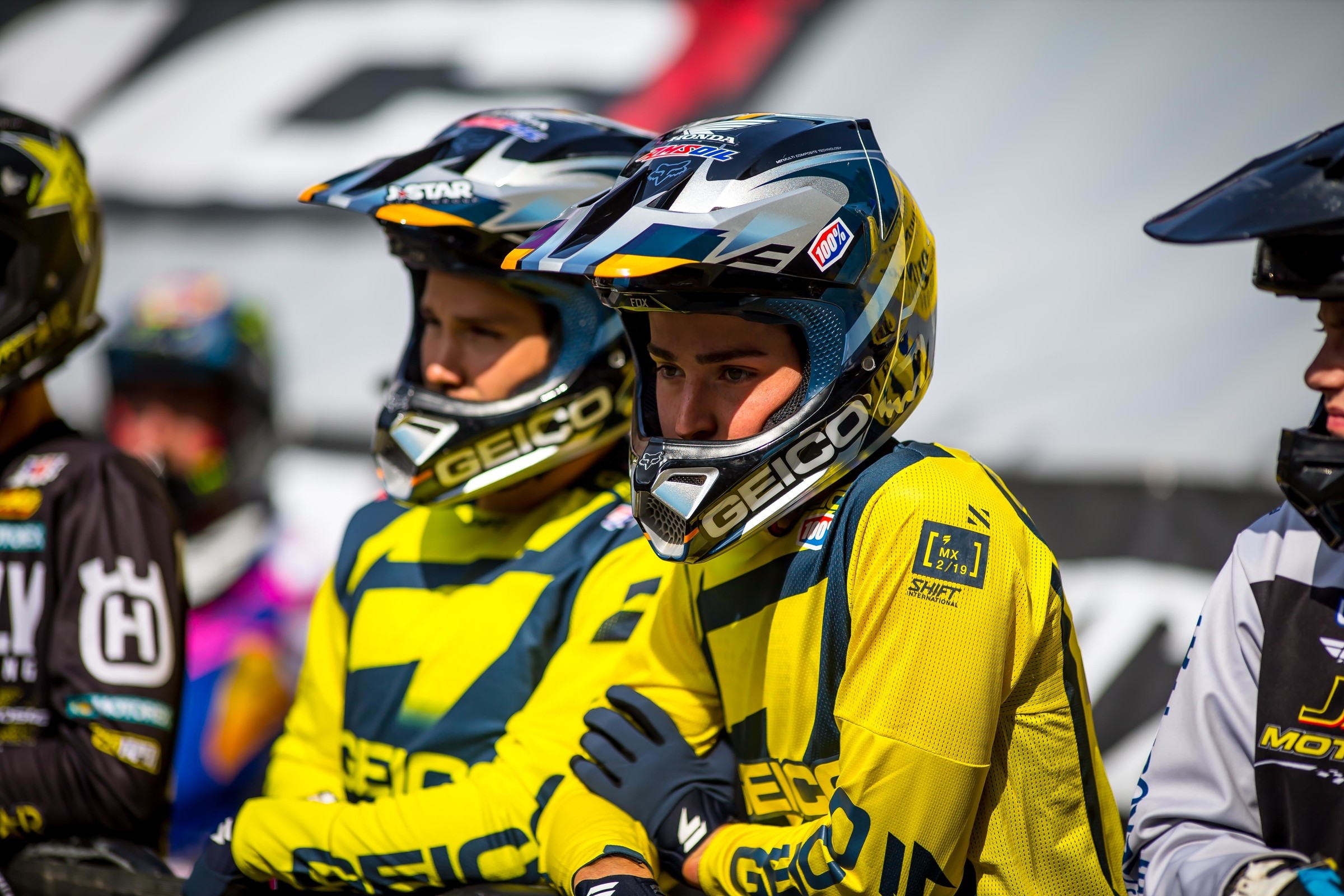 We all knew it was just a matter of time before Cameron McAdoo got a ride this summer. The GEICO Honda fill-in rider, last seen on the podium at the Las Vegas Supercross, was waiting for an opening on a 250 team for the Lucas Oil AMA Pro Motocross Championship and after three rounds, it was Troy Lee Designs/Red Bull KTM who came a calling.

We caught up to Cam to talk about how that came about and more.

Racer X: Congrats on the TLD ride. How did it come together? What are your thoughts on saying yes to the situation?
Cameron McAdoo: Thanks. Actually, last Wednesday I got a call from TK [Tyler Keefe, TLD team manager]. I’ve talked to him throughout the season and stuff, but I got a call from TK and he said he wanted me to ride the bike next Monday, which would be this coming Monday. I was like, okay. At the time I was headed back home to Iowa for a week to have an eye exam done and stuff. I went to Thunder Valley and I went over there after the motos and sat down with TK and had a meeting. Was kind of like, “Let’s go racing.” At first he mentioned, do you want to maybe come ride the bike? Then we got together and we both agreed that it would be good to go racing for the next few rounds and stuff. That’s kind of how it all came together.

Do you have any KTM steel frame experience in your background? If not, how is the adjustment to the bike?
I rode KTMs the whole time I was on 65s. That was it. After that I’ve only ridden every other brand other than a KTM, pretty much. But two days on, I’m just pretty pumped right now. We went to Glen Helen [Thursday]. The bike is good. I really like it. It’s got some really good characteristics that I think fit me and my style well. So I’m stoked on it. For just a couple days on the bike I feel pretty solid.

Obviously you didn’t have a ride for outdoors, but Mitch [Payton] was keeping his eye on you. J-Bone [Jermy Albrecht] told me he would call you. If anything happened at GEICO you would fill-in. Now of course you’ve got this TLD ride. It’s a bummer that you didn’t have a ride, but it’s cool that you were on everyone’s speed dial, in a sense, right?
Yeah, for sure. It was just one of those deals. Everyone fills their roster in October and it’s for the year. It’s not like they are looking for a new guy to go outdoors after Vegas. My deal with GEICO was supercross-only [Note: McAdoo was brought back to the team to race 250SX West Region when Chase Sexton’s season was delayed by injury]. They didn’t have any room for me outdoors. It wasn’t even really possible. So I think with my results in supercross, it was a bummer to not have a ride, but it was no one’s fault. It was either you feel bad for yourself and I should be out there, or—I went to the first three rounds and helped out Christian Craig, just by watching. Just simplify the racing a little bit. I felt like I utilized the time as best I could. I was riding during the week and training still and stuff and just staying ready.

It’s one of those situations where it’s hard to stay prepared and stay 100 percent when you don’t have a ride. You’ve got that 450 from GEICO. But you said that you’ve been training and riding? How hard is the motivation to try to do that?
Yeah. Honestly, it made it easier because I was riding with Christian and I was kind of being his training partner, in a sense. Towards the end it was kind of tough. Every single day I was doing 30s and 35s. I like to do the work. That’s the easiest part for me, is doing the work on the bike and off the bike, just grinding it out. I didn’t mind it because I feel like even if I’m not going racing, it is all helping out. You can’t let yourself go stagnant and fall behind those guys just because you’re not out there racing. At the same time, sometimes it is tough when you’re out there at Glen Helen and you got a couple 30s to do, but you don’t have any racing to do on Saturday so you’re like, dang, man. You’ve just got to believe in the process and know that it’s all going to work as it does and it always works out.

We were talking about you on one of my shows. Obviously I don’t know your financial situation. I don’t know what that’s like. But the last time we saw you on a track you were on the podium in Vegas at the East/West Showdown, and you rode amazing. That was the last time we saw you on the track. Your value would never be higher going into 2020. Then jumping on a steel frame KTM and trying to get up to speed with limited time on the bike might hurt you a little bit. Did you think about, maybe I don’t want an outdoor ride? Leave Vegas as the last race of the year. Did that come up at all?
It was thought of. People were like, you need to just take that 450 and load up the truck and go race outdoors. I’m like, no, I’m not doing that, but I can’t just sit back and wait, wait, wait just because I got one podium and try and hang everything on that. I think it’s a really good chance to begin building a good relationship with these guys over at KTM. Everyone has been nothing but great so far. Just a couple days of getting to know everyone. It’s to the point where I believe in myself. I don’t think that outdoor results will completely oversee supercross. Supercross is pretty important in this industry. I felt like I did fairly well making my mark, I had a pretty solid year and I built a lot all year. Obviously ended it on a really high note. I just want to get out there and race with the guys outdoors too and just keep myself out there. I feel like in our sport you can’t think, “Oh man, this has hurt his deal,” this and that about contracts and so on and so forth. That podium, you can’t take it away from me, but you can’t hold into that forever. That happened and then the following weekend was Hangtown and that was over. Vegas was done and gone.

Will you go with [Tyla] Rattray and other TLD riders at Baker’s Factory?
Right now I’ve been staying in California full-time. So that hasn’t really come up yet. As of right now I have plans to stay here in California. It’s the best spot for me right now. I’m close to the team. I can do testing whenever. I can get to know all the guys. It’s good to be out here at this point in my career, I feel.

It must be weird to see an orange fender in front of you.
Yeah, it’s different. It was different just jumping on the bike. Everyone was like, “What’s different about it? What’s the biggest difference that you can tell?” I’m like, honestly, the question is what’s similar? Not bad or good on either bike. They’re both such good bikes, but they have such different characteristics that it’s a big difference, honestly.

On another note, I’d like to publicly apologize to you for getting “Ram It” out there in the world and for all the fans that keep telling you all that every weekend. [Note: McAdoo rode for Matthes’ PulpMX “team” at Red Bull Straight Rhythm last year and Steve’s nickname for him stuck.] We started something that we shouldn't have done.
It will not end. I know that. I’ve already accepted that. It’s just going to be a thing. I think when I posted yesterday that I was riding for TLD, there was probably at least 30 “Ram It” comments. It’s all good. Gaining fans whatever way, it’s always positive.