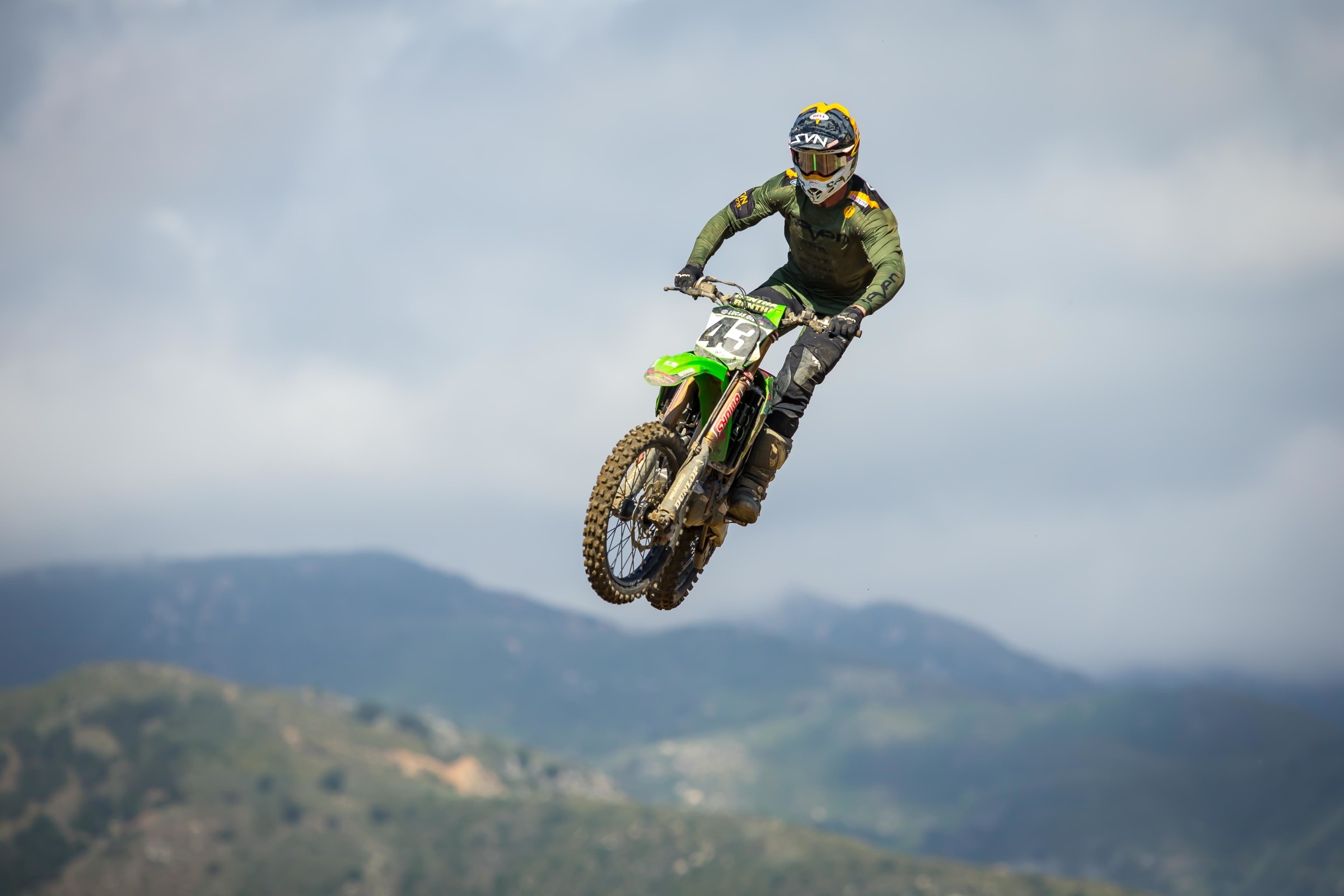 After 18-29 moto finishes last weekend at the Fox Raceway National, Tyler Bowers finished 22nd in the 450 Class. The veteran rider, like many riders in both classes, was familiar with the Fox Raceway at Pala track coming into this weekend—although riding it on a weekend is different from race day national. Bowers went down early in the second moto when he got together with Jake Masterpool and struggled to move up throughout the pack before finishing outside of the points-paying top 20, in 29th place.

Fredrik Noren was one of the active riders who raced in the 2011 Pala National, as he finished 18th overall in the 450 Class. So far through two rounds of the 2019 Lucas Oil AMA Pro Motocross Championship, Noren has battled with factory riders and finished an impressive 15th and ninth overall through the first two rounds.

Racer X: You ride here a lot. You test here for the Showa guys, for Kawi guys. What was the difference between Pala on a Wednesday and Pala today, in your eyes? Better, worse, or what was the difference?
Tyler Bowers: It was not any better. It was Pala. It kind of sucks. It’s hard. When I test here, we come out and we run a setting here. At the end of the day we’re like, “All right, this thing is sick!” Then we go to Glen Helen and I’m like, “Who rode this thing on Tuesday? This thing sucks!” So we work all day at Glen Helen and get a setting and then go from Glen Helen back here, and then it sucks again the next Tuesday. We decided if we’re at Pala we’ll maybe go some directions, but not get crazy with it, and then work on the Glen Helen spec. So last weekend I had a lot of issues with my setup. We had changed a link in supercross and it was really messing up my shock. So then this week we fixed that, fixed the shock. Then I come out here and I’m like, “Dude, I should have ran the other shock.” All the square edges and stuff. I was kind of just trying to get through the day, trying to make the best of it and working on some stuff. Then I’m like, “Dude, let’s just go east. It’s going to be good when it goes east.” So whatever. I kind of lived through the day.

The second moto, first turn crash. Way back. Get up. You didn’t get points, but at that point you just go, “F*** my life. I’m just going to try to put some laps in and treat it like a practice session.”
Actually, I didn’t crash in the first turn. I was good up until…

I thought it was the first turn.
No, it was a little bit later. There were two ruts that came together and [Jake] Masterpool, I had a wheel on him on the outside. Just beginning of the moto was one of those things where he should have just calmed down and, “Okay, whatever. I’ll take one and we’ll get through the first lap.” He just kind of stayed on it and his front wheel got under my rear wheel, and then we stuck. So he went down and then I endoed. When I endoed the bike landed on me and I was stuck there forever. Thank God he helped me.

He actually helped you.
He helped me up. I’ll give him that. He was yelling, but he helped me up. Then we got [the bike] off [me] and tried to make a charge back after that. My goal was to get points each moto, be kind of safe at the beginning and get your points. I know how this goes. Didn’t get any points the second moto so I'm really pissed off.

Four motos in and you’re already angry.
Yeah. It’s one of those things. If you don’t get points, it’s kind of like a waste. It sucks. So if you’re not getting points, I might as well stay at home.

I had a rider finish 21st three out of four motos in a row. I was dying as a mechanic. I hated it.
My only other full season in ’09—I was young. I was, like, 18. I remember other riders, like the veterans, if they were having a rough first moto they would pull off. If they were 23rd or 26th they would just pull off. I’m like, why are these guys quitting? These quitters! I’m out there getting 21st each moto. Then they go out the second moto and they have all this energy and they like top ten. They go back, regroup, get their bike together, have another 35 minutes to recover, then they just go send it. That was probably smarter.

Racer X: Nice work today. Top ten overall, I believe. Good rides in both motos. You’ve got to be stoked.
Fredrik Noren: Yeah. I’m super happy. I think ninth overall. Day started out good. Had good qualifying. Had decent starts both motos as well. Just tried to ride my own race and kind of move forward, though I knew I had the guys behind me. So it kind of helped me bring up the pace a little bit, which is good. It’s good to be back up there racing with those guys. It’s been a long journey coming back from all these injuries. I’m super happy, super thankful. It’s an awesome blessing to be up here with all these great sponsors and doing the van life. It’s pretty cool.

Well, you’re used to that, no doubt. Some big names, the guys you were passing, catching and passing. That had to feel pretty good.
Yeah, definitely. Me and [Justin] Barcia had a pretty good battle there for most of the moto, so that was fun for sure. It’s always fun to beat some of those factory guys.

How about you and Ben LeMay in the first moto for a little bit? Just a battle going on with you and Ben.
Yeah, we did. I’m like, Let’s go! It was good. It’s always fun to battle. It’s more fun when you’re in front, I would say. Then you don’t have to get roosted, but it’s still fun. It was a great day. I’m pumped.

Supercross went okay for you. Some main events, got better as it went on. It wasn’t terrible. What is it about outdoors and you, Freddy? What is the deal here? Obviously, you were injured last year but so far through the four motos you’ve been really good.
I don't know. I wish I could say because I want to be super, super fast in supercross, and I’m trying to be. Next year I will be. But I don't know. Outdoors, I’ve raced them my whole life. It’s kind of just there. I just block out every type of thought in my mind and just go.