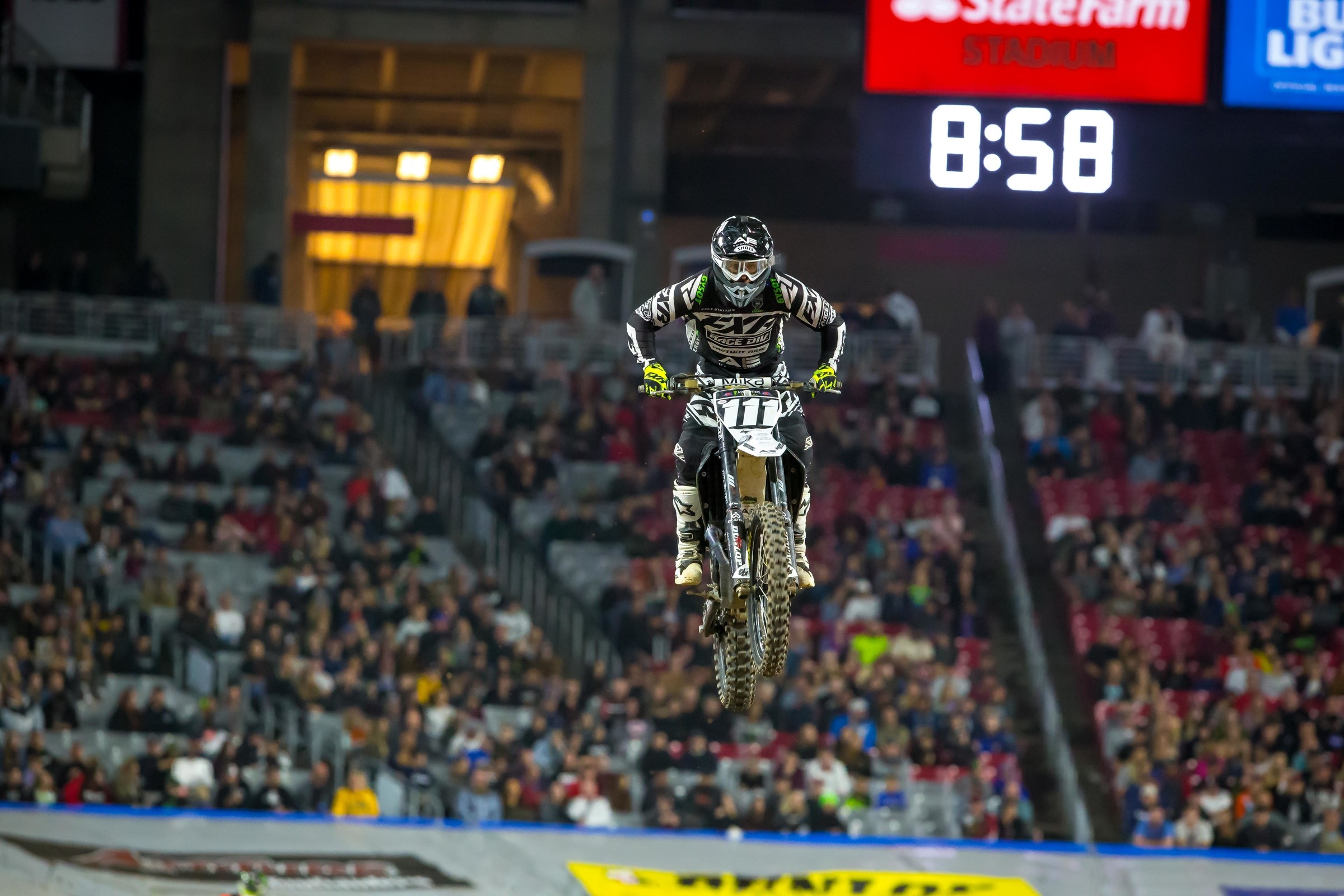 If you’ve been keeping track of Cooper Webb’s wins this season you've probably noticed that since winning his first career 450SX race at Anaheim 2, he developed a pattern of not losing more than one race in a row. This pattern lasted for awhile, but with second, third, and fourth-place finishes in Daytona, Indianapolis, and Seattle, respectively, this is the longest he’s gone without winning a race going all the way back to the very beginning of the season! After Seattle Webb told us he was fired up for Houston, so don’t be surprised if he breaks his streak this weekend. –Aaron Hansel

Injuries are and always will be a part of this sport, and unfortunately there were a fair amount of them in Seattle. It’s never good seeing big wrecks, and the big one that took place at the beginning of the 450SX main event was cringe-worthy. But if you’re a fuel-tank-is-half-full kind of fan, you can find a positive in the fact that there will be more opportunity in Houston for guys who have been struggling to make mains this season. Pay close attention to the qualifying races, we just might see some new faces enter the main event fray on Saturday night. –Hansel

Joey Savatgy has been great this season, but that should come as no surprise. He’s talented, was awesome at the Monster Energy Cup on a 450, and has a determined, head-down approach. He’s landed inside the top five four times this season, including a fourth in Minneapolis, and if not for a few mistakes here and there that have resulted in small crashes, like his washout in Seattle, he may have been on the podium. We’ll see if he can clean it up just a bit in Houston. If he does, he might end up on the 450SX box for the first time in his career. –Hansel

Michael Mosiman and Chris Blose both had excellent nights in Seattle, with Mosiman taking fourth and Blose rounding out the top five. Even just by themselves those are great results, but they’re especially meaningful for these guys. For Mosiman, it’s the best finish of his entire supercross career. And Blose? He hasn’t finished this high in a 250SX race since A2 in 2009 (he was fourth in Vegas in 2011 on a 450). Even more impressive is that Blose came from back in the pack to do it! Interestingly enough, Mosiman holds sixth in points by a single point over Blose. We’ll see if these two can put in more career performances in Houston. -Hansel

After finishing second four times this season, Dylan Ferrandis finally pulled off the first 250SX win of his career. It couldn’t have come at a better time for him either—with just three 250SX West Region rounds remaining the Monster Energy/Yamalube/Star Racing Yamaha rider badly needed to make up points on championship leader Adam Cianciarulo, who now leads by 12 points. With so little time on the clock, every race is crucial at this point. Will Ferrandis take another bite out of Cianciarulo’s lead in Houston? -Hansel

Yes, he didn’t get full points last weekend after being penalized for jumping on a red cross flag, but his win still stands, and Marvin Musquin now has back-to-back wins. Musquin is catching fire at the right time and if he’s to dig into the 14-point hole he finds himself in, a third-straight victory will go a long way. Can he win his first Triple Crown event of his career this weekend? -Stallo

Despite finishing runner-up to Musquin last weekend in Seattle, Honda HRC’s Ken Roczen is still not feeling 100 percent, health-wise. “I’m still not 100 percent with whatever is going on with my body, but the feeling that I had on the bike was good all day,” he said in a team statement. “It was the same for the races—I just tried to go out there and have fun, and I rode really well.” We heard that Roczen went to Red Bull headquarters following Seattle for more tests to try and figure out what may be going on. If he’s feeling 100 percent, look for Roczen to continue to challenge for wins. -Stallo

Eli Tomac seems to have the Triple Crown format dialed. Last year, he won two of three, and this year he won the second Triple Crown in Detroit. Tomac has had an up and down year by his standards, and trails Cooper Webb by 19 points entering the weekend. If he’s to make a late run at this title, he’s in a must-win situation this weekend. -Stallo

Josh Grant didn’t have a great return to supercross last weekend in Seattle, as he struggled in the tough whoops section all day and failed to qualify for the main event. With another week of testing with the Monster Energy Yamaha Factory Racing team, one would expect a much better performance from the veteran. -Stallo