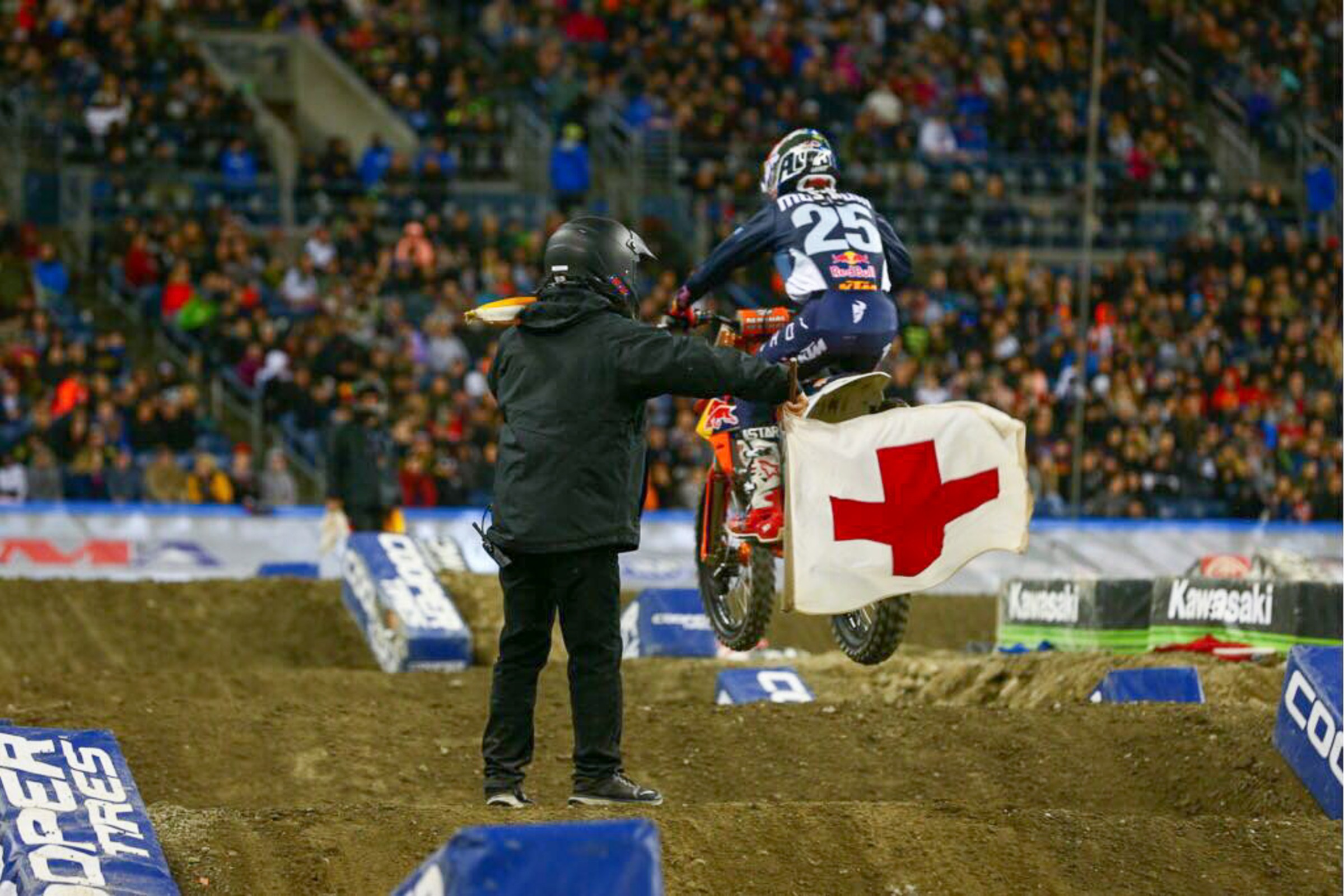 3 on 3 FAQs on The Musquin Penalty

Depending on the final points tally in the 2019 Monster Energy AMA Supercross Championship, Marvin Musquin’s error in jumping through a section lined with red cross flags in Seattle, and his subsequent loss of seven championship points, could serve as one of the largest penalties in championship history. Musquin is on fire via back-to-back wins, and if he loses the championship by less than seven points, the Seattle penalty will be discussed (and regretted by Marvin) forever.

It’s still a hot topic right now, so we will dive back in with as much clarification as possible.

How did they decide on Marvin’s penalty?

Well, there really wasn’t much to decide. The AMA/FIM Supercross Rulebook says so. Here are the rules on jumping through a red cross flag (emphasis ours):

A. During practice and qualifying, the loss of the fastest lap time during that session.

B. During Heat or LCQ races, the loss of number of positions gained, plus two additional positions in the final results for that race.

E. During a sighting or cool-down lap, a fine as determined by Race Direction.

F. If at any time Race Direction determines that it was not a blatant violation of the rule, a warning or fine may be issued.

In Musquin’s situation, rule C. applies. He was racing a main event race, and he did not gain any positions. Based on that, penalizing Marvin points and purse equal to two positions, and then two additional points, makes complete sense. There wasn’t any gray area here—it’s in the rulebook.

What might have added to the confusion is that the TV broadcast kept referencing the possibility of Marvin losing positions, and second-place finisher Ken Roczen possibly winning the race. By teasing that possibility, only to see Musquin keep the win but lose points, it made it seem like the AMA/FIM was making up rules on the fly. In reality, they stuck to the rulebook exactly as it is already written.

What about the 250LCQ in Seattle? A rider was stripped of a position.

Yes, but that was because the officials determined Mathias Jorgensen had gained an advantage by going off the race track (he was block passed and sent off the track by Chris Howell, then pinned it through the infield to pass Howell). Musquin had a red cross infraction, so a different rule applies.

What about Ryan Dungey in 2016? He was stripped of a win.

True. But the rulebook changed for the start of the 2017 season. This new rule has been in place for nearly three seasons now.

If the rule is black and white, why wasn’t Musquin’s penalty made official immediately after the race?

We talked to AMA Supercross manager Mike Pelletier yesterday, and he said that, out of professional courtesy, before the penalty is made official, they take the time to review the video footage with the rider and allow him to explain his take on the situation. In this case, Marvin and his team didn’t have much to say—Marvin admitted to wrong doing, no appeals were filed, and the points penalty was put into place. Still, this all added time to the official ruling.

Why is the rule the rule?

Most racing series would prefer the driver or rider who fans saw win the race actually win the race—no doubt it was a strange look for Dungey to win the 2016 Detroit Supercross, only to be penalized back to third place later. NASCAR famously started making Tuesday the day to hand out official penalties, because it takes a while to really inspect a race car at its research and development center. However, it would rarely strip a win from a driver and instead handed out fines and suspensions for future races as the penalty.

The idea of this supercross rule is to keep the rider who crossed the checkered flag first as the winner. However, if a rider gains positions, those spots will be taken away. So, had Musquin passed someone by jumping, he would have had his win taken away. That could be confusing, but it would be necessary.

If a rider knows he isn’t going to lose a race win, doesn’t that mean he’s free to air out a section with red cross flags, pull a lead, and take a win?

Well, yes, technically, that could happen, but it would take an almost magical set of circumstances. First, you need a rider fast enough to win races but also completely out of any points situation that matters. Maybe that would be Eli Tomac last year, who was out of championship contention early? Maybe Jason Anderson coming back at the end of this season? It’s possible, but rare, to find a rider that could win races but completely doesn’t care about points.

Second, if a rider gains any positions, the win will be taken away, so any advantage as far as passing would be wiped away. The only real advantage a rider can gain is if he is already in the lead and gains time. So now you need to find a rider fast enough to win, who doesn’t care about points, and happens to be in the lead as the red cross flags come out. That’s a very specific set of circumstances.

However, we doubt this will really come into play. Deep down, riders care about their own safety, and the safety of their peers, more than anything. We don’t believe any rider would intentionally jump through a red cross situation. Musquin made a mistake, we doubt he did it on purpose to gain time, and we don’t think any other ride would either.

Has this happened before?

Yes, the world learned about this new rule when Jeremy Martin was penalized for doubling a triple lined with red cross flags at the Indianapolis Supercross in 2018. It was the same situation as Musquin, where Martin did not make any passes because he was already in the lead and he took on the same seven-point penalty. However, it wasn’t nearly as controversial as this one. Why? Because the 250 class doesn’t draw as much drama as the 450 class.

How does it impact the championship?

This is massive. Musquin would have had Cooper Webb’s gap cut to seven points with five rounds to go. Instead, he’s still down 14. With the way Marvin is riding, he can certainly make up 14 points, but, he has no room for error. One bad race, or any night where he hands points back to Webb, is going to make his championship scenario dim greatly.

By the way, Red Bull KTM’s team manager Ian Harrison told us, “It’s tough for the team to take it, especially for him in his position, he’s close to the championship lead, but it’s the rule.” Sounds strange considering that Musquin is actually second to another Red Bull KTM rider, Webb, but KTM’s real concern over the seven points is this: Monster Energy Kawasaki's Eli Tomac is just five points behind Musquin, and Honda HRC's Ken Roczen is only four points further back. If Webb were to get hurt or falter mightily, Musquin could find himself in a real dogfight with the other two to hold onto the points lead.