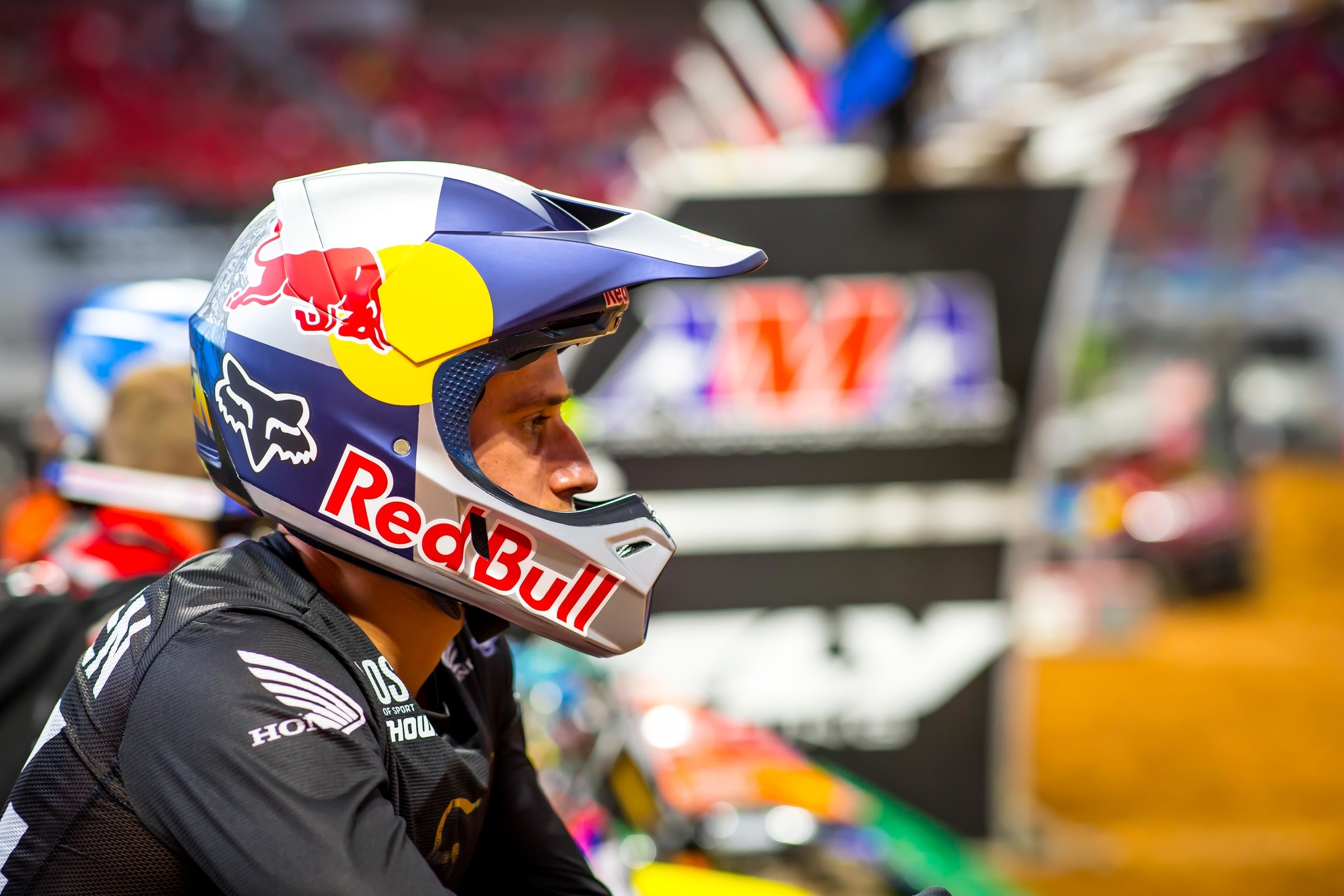 This is the great debate right now: Cooper Webb’s season has the look of a champion. He’s seized control with the most wins (five in nine races, the most anyone else has is two), he’s been the best starter but ALSO proved he can come-from-behind in Arlington and proved that he can salvage a second on a bad day (Detroit). Further, if you want to talk confidence and momentum, realize that before his breakthrough win at Anaheim 2, Webb finished 5-10 at the opening two rounds. He stood eighth in the standings and 13 points behind series’ leader Ken Roczen. Over the next six races Webb has made up 26 points and has won five out of seven.

This is how championships are built.

However, Webb holds just a 13-point lead in the standings. Roczen hasn’t won but has played the consistency card to the hilt. His worse finish this year is a fifth.

There’s an old saying “The series starts at Daytona.”

Honestly the numbers say no. It’s a romantic notion to picture a rider wearing down his competition with a second-half surge or playing it smart until the halfway point and then going on a tear. Well, this basically never happens. Ricky Carmichael is the man that coined “The series starts at Daytona” and yet in four of his five championship seasons, he already had the points lead before Daytona, and the other time, he had it by the time Daytona was over.

Late-season surges end up not winning titles. Chad Reed won the final six races in 2003—every single event after Daytona—but lost the title to Carmichael. Eli Tomac’s comeback attempt in 2017 almost worked, but he faltered at round 16 and lost the title to Ryan Dungey.

In recent history, only Davi Millsaps’ magical 2013 season featured an early points lead but no title. Davi led the points heading into Daytona, but he was battling injuries and Ryan Villopoto. RV won Daytona to take a points lead he would never relinquish.

The last time a rider didn’t hold the points lead leaving Daytona but still went on to win the title? James Stewart in 2009. To find another year where that happened you have to go all the way back to 1992! That’s twice in over 25 years.

Titles are usually built the way Webb is doing it this year: a few chaotic early rounds are followed by a rider taking control somewhere around the fourth or fifth race. That’s Webb right now.

This led to our big debate on this week’s Fly Racing Racer X podcast, with myself and Steve Matthes all aboard the Webb Wagon and Jason Thomas telling us to pump the brakes a bit. While JT does acknowledge Webb has good odds, he’s not going to stamp or predict anything considering that slim 13-point lead. Thirteen points is the difference between two Roczen wins and two Webb fourths. Literally, this points lead could be gone in a week or two.

So says the math, but the real reason no one regains the points lead after Daytona is bigger than a number. Throughout the season, confidence not only builds for the points leader, but the frustration grows for others. To launch a huge win streak and rip the points lead out of another rider’s hands, a rider must be at his absolute mental and physical peak. But if you’re not winning the races, it’s hard to feel that way.

So under any normal circumstances, this title is Webb’s. He has the numbers and the confidence. For both right and left brain thinkers, it’s over.

Only, we’re not dealing with normal circumstances here, for two reasons.

First, this Webb charge has come from nowhere. Cooper has said his goal this year was to only win a single race. Multiple wins? Titles? Way over the mark. That is probably making this harder to recognize and understand for everyone watching. You give Ryan Dungey or Ryan Villopoto a 13-point lead and five wins by Daytona, and it’s seems normal and acceptable. This Webb thing is hard to process so quickly. The @SXresearchdept team says Webb has the second-quickest distance between his first career SX win and his fifth—just 42 days. Bob Hannah went from one win to five in just 29 days.

So that’s one reason not to stamp this title. In just 42 days, Cooper Webb has gone from a ninth-place guy to the best supercross rider in the world. Sometimes it’s hard to believe what you’re seeing even when you’re seeing it.

There’s another reason, though.

In most seasons, riders that expect to win become angry when they do not. Confidence sags. Fingers get pointed. Negative noise from the outside gets harder to ignore, and internal conflict grows. It’s one thing when a great rider gets injured and simply can’t participate in the races (Jason Anderson gets to sit and watch feeling like he could have won this year). But when a great racer is healthy but isn’t winning, things turn weird, and results get worse.

Back in 1993, rookie Jeremy McGrath stunned everyone by winning races early. He didn’t have a huge points lead by Daytona, though, so stalwarts Jeff Stanton or Damon Bradshaw could have tracked him down. Instead, Stanton and Bradshaw got worse while McGrath kept winning. McGrath went 1-1-2-1-1-1-1 after Daytona that year. Stanton went 4-3-3-20-3-2. Bradshaw went 7-5-16-8-13. McGrath had the confidence. Everyone else had the frustration.

But this might not apply to Ken Roczen. He hasn’t won this year, but his situation is unique. Roczen’s inevitable “first win since the injury” will serve as tremendous delayed gratification. It will be a massive story, a massive boost and potentially a game changer on the mental side. We’ve already seen that a win or two for Eli Tomac won’t change his fortunes (he’s followed each win this year with a sixth-place finish). We don’t know what it will do for Roczen. Further, while Roczen hasn’t won, his number-one goal this season is to just not get hurt again. No matter how heartbreaking the losses this season—and they’ve been rough—he’s always had that “at least I’m healthy” reminder to renew his spirits. What Roczen has dealt with physically and mentally the last two years makes it difficult to compare his season to any other.

His win will be a breakthrough, but how big? Enough to mount a win streak which would quickly wipe away a 13-point deficit?

The craziest thing about all of this is that Webb, who held a career average 450SX finish of ninth 45 days ago, is now the established player. Roczen, long a title contender, is the wild card. In a season that began with a surprising start, are we possibly in store for an even more surprising finish?