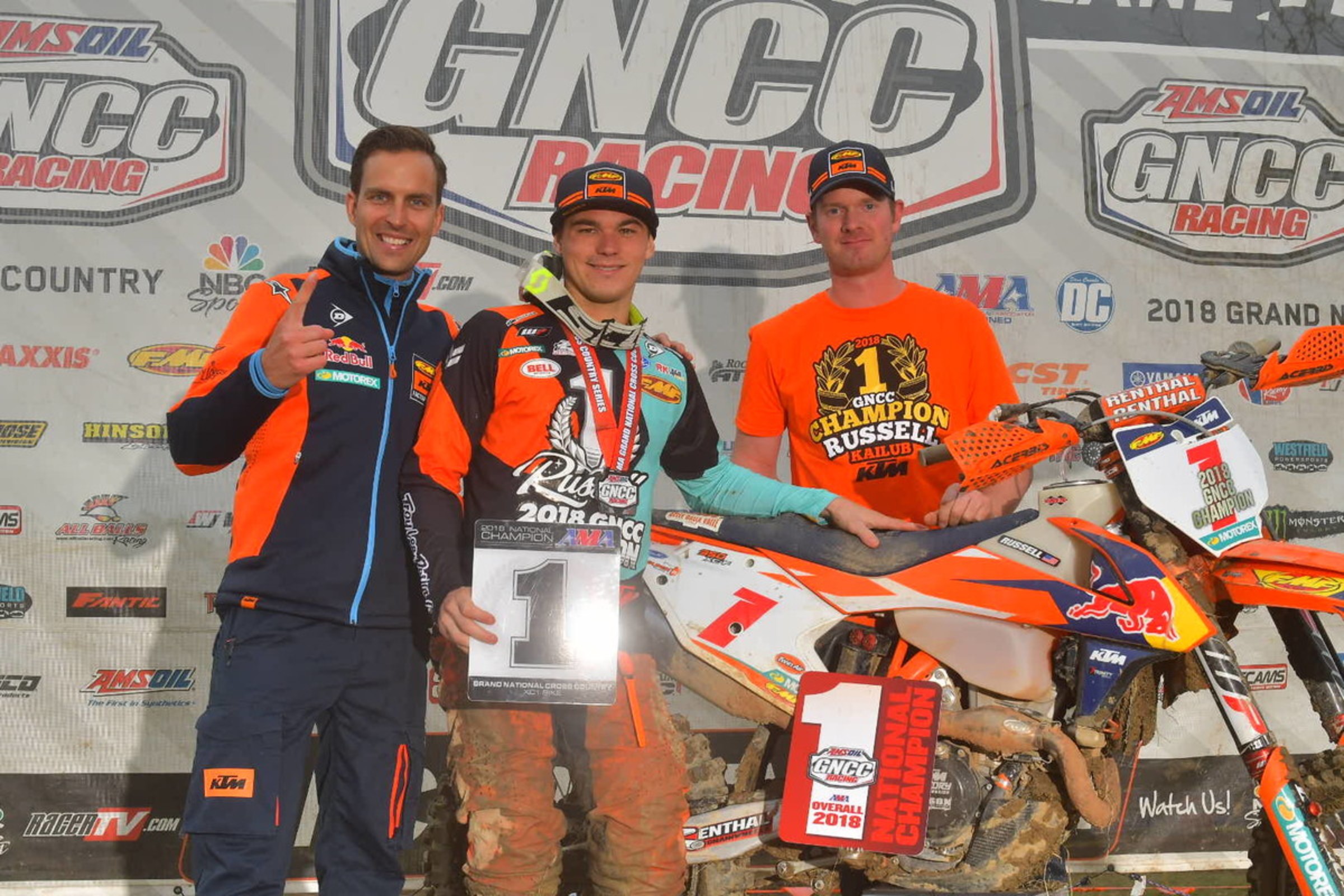 It may have taken a couple of weeks longer than originally planned, but the opening round of the 2019 Amsoil Grand National Cross Country (GNCC) Series is will be here soon. Torrential rainfall flooded sections of the Big Buck Farm, causing an unfortunate postponement of the season opening round. The series pushes forward and will kick the season off in the deep sands of Florida at the Wild Boar GNCC this weekend. With a number of riders making changes in the off-season, the 45th season of GNCC Racing promises to be one of the most exciting.

Here are five key storylines for GNCC in 2019:

Kailub Russell has now amassed six-straight GNCC National Championships, the most consecutive titles in GNCC history and the second-most titles of any GNCC racer, trailing the great Ed Lojak, who has nine titles. This makes Russell the clear favorite coming into the 2019 season.

However, many people are wondering if a seventh consecutive title will come with ease or if it will be a dogfight down to the wire. Last season in Russell’s Lucas Oil AMA Pro Motocross Championship debut, he suffered a crash that further aggravated an existing shoulder injury. When GNCC returned from summer break, Russell struggled at the Mason-Dixon GNCC, ultimately ending the day in fifth place overall. At the following round he finished in second place and wrapped up the 2018 championship with one round remaining.

Russell would sit out the final round at Ironman in order to undergo shoulder surgery. Will this shoulder injury and surgery have an effect on Russell’s 2019 season? If history is any indication of Russell’s ability to bounce back from injury, then the answer would be a quick no as Russell has quickly returned from past injuries only to be on the top of his game. Time will tell what the 2019 season brings, but many believe it will be the same success he’s accustomed to.

For the past two seasons, the biggest threat to Russell’s championship hopes has been Thad Duvall. Russell and Duvall have raced each other since they were on mini bikes, and both riders progressed through the XC2 250 Pro class, where they both won championships. The transition to the XC1 class proved to be tough for Duvall early on as he suffered a number of mechanical and body issues through the 2009, 2010, and 2011 seasons, ultimately putting a negative spin on his “Bad Thad” nickname.

However, Thad began to mature as a racer and a spot on the Rockstar Energy Husqvarna Factory race team would propel his career to new heights, These days “Bad Thad” is quite good. Through the past two seasons, Thad has claimed six race wins and has finished on Kailub Russell’s rear wheel at most rounds. Unfortunately, a wrist injury at last year’s Snowshoe GNCC would eliminate Duvall’s hopes to wrestle the title away from Russell, but he will enter the 2019 season motivated in many ways. After finishing just mere seconds out of the lead after three-hour races multiple times, Duvall will be hungry to gain more wins and take a title of his own.

3. Green Machines Back on Track

With the elimination of Amsoil Arenacross, the Babbitt’s/Monster Energy Kawasaki team has shifted their efforts to the off-road world and have picked up some top talent in the form of 2010 GNCC National Champion Josh Strang, along with Jordan Ashburn, who can be considered a veteran of professional racing in the GNCC series. Both of these riders have a history of success on Kawasakis, so this change could prove to be beneficial for both riders and Kawasaki.

Babbitt's has former GNCC Champion Fred Andrews running the team, so this effort should be ready quickly.

The last time a Kawasaki claimed a GNCC overall win came in 2010 when Jimmy Jarrett broke through to take the Unadilla win. Since then, the only time a Kawasaki has even finished on the podium came back in 2013 when Strang piloted a privateer Kawasaki to five podium finishes in his first season returning to GNCC competition after racing the WORCS the year prior. That 2013 season was not Strang’s only experience on a Kawasaki—he rode the green machines from his youth through his amateur career in Australia before coming to the United States in 2007 with the Factory Suzuki squad.

Ashburn piloted the KX450F to two Open A class titles in 2009-2010, and also finished well inside the top 20 overall both seasons. The past few seasons have been a struggle for both Strang and Ashburn. After being the biggest challenger to Kailub Russell for much of the 2016 season, Strang suffered a couple of injuries that put a damper on his results. Ashburn had a successful 2016 season aboard a privateer KTM, which earned him a Factory Beta ride in 2017-2018. Unfortunately, Ashburn never quite meshed with the Beta and has suffered some disappointing results as well. With two riders who know what it takes to run at the front of the pack on familiar equipment, who knows what kind of changes this could bring for the 2019 season.

Trevor Bollinger has made a name for himself in the off-road racing world the past few seasons. This is pretty impressive for a kid from North Carolina who back in 2013 had nearly decided to sit out the GNCC series and focus his efforts elsewhere. He decided to race, though, and then began landing top amateur awards.  That progressed him into the XC2 250 Pro class, where he landed a ride with the JCR Honda team, eventually claiming the XC2 title in 2016. He made the move to the XC1 class in 2017 and while his rookie season may not have set the world on fire, he earned several top five finishes.

The 2018 season would see Bollinger challenging for podium finishes. He would land on the XC1 podium four times in 2018, and in one race he battled Russell down to the wire for the win. However, Bollinger will enter the 2019 season on a new brand as the JCR Honda folks have shifted their focus back to the West Coast and Bollinger has moved to the Rockstar Energy Husqvarna Factory racing team. The team has the wisdom and experience to push a rider to new heights in the hopes of earning a GNCC National Championship.

Thus far, Bollinger has put in two successful outings on the Husqvarna, where he has claimed the overall win at two Mideast Hare Scramble events, which are very popular local events in the Carolinas and frequently attract other top riders. Bollinger is a pretty modest and humble guy and when asked about his goals for the 2019 season, he simply wants to contend for podium finishes. However, with a proven program behind him, those podium finishes very well could become race wins.

Many of the current GNCC contenders started racing the series in the Youth ranks.  However, there are two riders from the Northeast who have broken the mold and have found success in a very short period of time. Josh Toth and Ben Kelley both hail from Connecticut and grew up in their local NETRA series, and also in the popular J-Day off-road events. They entered the GNCC series full time for the first time in 2016, heading straight into the XC2 class, and they made an impact immediately. They began the season with the Trail Jesters squad out of New England but Toth was eventually picked up by the AmPro Yamaha team. In his first ride aboard the Yamaha, Toth would claim his first-ever XC2 class win.

Toth then claimed 2017 XC2 Championship, while Kelley remained with the Trail Jesters KTM squad and claimed some podium finishes. The FMF KTM Factory Racing team signed Toth for 2018, and the Trail Jesters KTM team, with Kelly, began to receive elevated support as a satellite KTM team. This proved to be huge for both as the two would battle tooth and nail through the 2018 season, with Kelley eventually claiming the XC2 title. In the final three rounds of the 2018 season, Kelley finished on the overall podium, besting some of the top XC1 riders on his 250. He even held the overall lead on time adjustment at multiple races.

In 2019, Toth will move to the XC1 class and look to challenge the top talent in the series. This move has proven to be tough on former XC2 champions, but Toth is another rider who has experience landing on overall podiums, and came close to an overall win at the 2017 Snowshoe GNCC. Kelley will defend his XC2 title, and makes a strong case that he could be the first rider to ever claim an overall win from the XC2 class. He came very close at last year’s season finale, and this year he could very well make history.