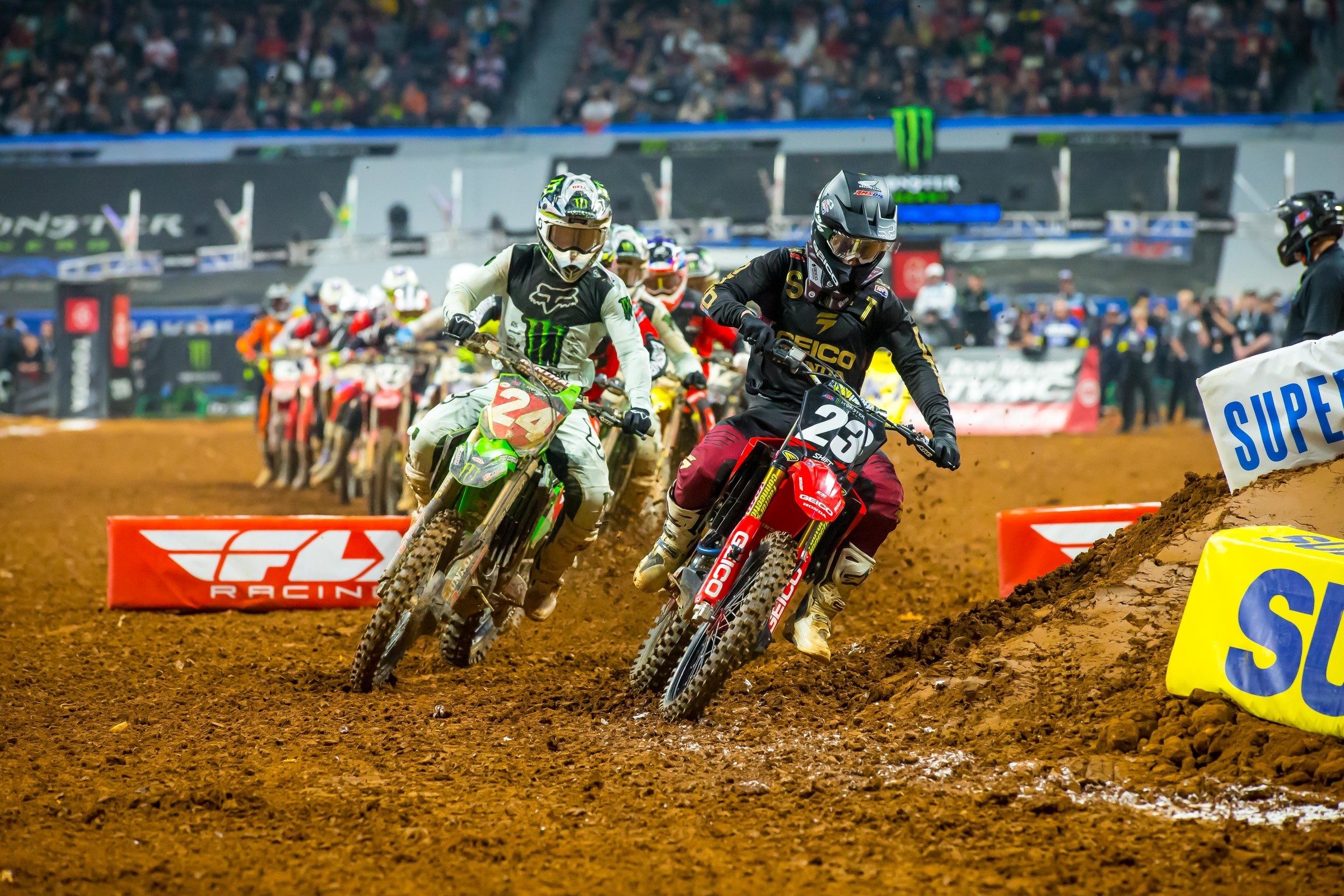 Redux News and Notes From Atlanta

Laps led on the season for Red Bull KTM's Cooper Webb. Honda HRC's Ken Roczen has the second most laps led in the 450SX with 26.

Laps led by Webb on Saturday night in Atlanta.

Place finish for Rocky Mountain ATV/MC-KTM-WPS' Blake Baggett on Saturday, his first podium since round four in Oakland.

Worst finish for Roczen through nine rounds of the championship after his fourth-place finish in Atlanta.

Place finish for Monster Energy Factory Yamaha’s Aaron Plessinger on Saturday night, a career-high in 450SX for the rookie.

Days between main event finishes for Smartop/Bullfrog Spas/MotoConcepts Honda’s Mike Alessi, who returned to supercross in Atlanta and finished 16th.

Times Webb, Baggett, and Musquin—all KTM riders—have combined to make up the 450SX podium in 2019. Prior to Atlanta, in Oakland Webb took the overall and was followed by Musquin and Baggett, respectively. This time, Baggett edged out Musquin for second place.

“Going into Atlanta, I was feeling a lot better than I have the past two weeks from the flu. We came into the race with a little different suspension setting, so I was excited to try that but the track was one of the toughest. It was really soft and rutted so it was risky trying something new in those conditions, when you don’t know 100 percent what the bike is going to do. In the heat race, I got an okay start but was fully pinched off in the first turn, so that messed me up a bit and I was only able to finish seventh. In the main event, I was on the far outside and grabbed a good start. I had to jump a different rhythm than most the other guys in the first lane and got passed, so I went straight back to sixth. I moved into fifth then got stuck behind [Aaron] Plessinger for a while. I spent way too much time trying to get around him, then when I did after he went down, I couldn’t really do anything from there so I just rode a solid race and got fourth. I’m really looking forward to Daytona. It’s obviously the first time I’ve raced there in a long time, so it should be good.”

“Atlanta Supercross was pretty awesome! I was struggling in the first practices a little bit, but we made a little shock change and it was definitely for the better. I qualified thirteenth and went into the heat race with a pretty good gate pick. I came out pretty bad on the start, but I made it work and was able to come back to fifth. Then the main event, I lined up in a pretty good spot and yanked a really good start. I was running fourth for a while and crashed right in the sand, then got up in fifth and stayed there. We made a lot of steps in the right direction. I’m really, really excited about tonight and looking forward to Daytona next weekend!”

“There are a lot of positives to take away from today. The heat race went really well. I got off to a good start and was able to make some quick moves to get by everyone early. I really tried to focus on hitting my marks because the track was tricky and I felt that it was really going to come down to who made the least mistakes. I tried to take some mental notes for the main event. Lining up for the main event, I was having a hard time getting amped up to race. I don’t know if it was nerves because this weekend marked a year since my injury, but normally I can channel that and feed off it. Tonight though, I just felt flat in the beginning of the race. I didn’t get the best start after coming together with Dean [Wilson] and then my first two laps were just terrible. I made a ton of mistakes and was almost fighting myself. When I came around and saw P-19 on the pit board, I knew I had to make something happen and really set the top 10 as my goal. I started to put together solid laps and was matching times for a lot of the guys toward the front, so I just focused forward and kept making as many passes as I could. I just ran out of time and guys to pass when I got into 10th, but I was happy because normally I run out of steam toward the end and I think tonight I really maintained until the end. I need to just figure out the first part and once I’m able to put all the pieces together, I know I’m going to have a really solid weekend.”

“Atlanta was the best I’ve felt on the bike so far, after being sick all week and only riding one and a half days I was glad I had that comfy feeling on the bike. I qualified second in east and fourth overall, but I wanted the top bad. In the heat race I got a third place start and was riding well. I wanted to win it, I got into the lead and I told myself [Austin] Forkner wasn’t getting around me. Then I saw the red flag. Unfortunately on the restart I got passed in the first rhythm lane and basically just hung on Forkner’s rear tire the whole race. In the main event I got another third place start and but got myself into second! I felt solid but I made one slip up which allowed Adam [Cianciarulo] and then [Dylan] Ferrandis to get by. A couple laps later I ended up going down so I had to settle for fourth. Not a podium but I’m happy with my riding, just inching towards that top step. I’m testing with the team this week and I’m coming out hungry in Daytona!”

“Had a big crash on Friday during press. Was pretty beat up after that and then ran into some more problems in timed qualifying. Then in the main event I ran into Alex Martin around half way and it dropped me back to 21st. Honestly the day reminded me a lot of my rookie season—too many mistakes. I’ll take a few days off to heal up and be ready for Seattle.”

Monster Energy/Yamalube/Star Racing Yamaha’s Mitchell Oldenburg went down hard in practice on Saturday and was unable to race. He wrote on Instagram that nothing was broken and that he hopes to be ready for Daytona this weekend.

“Bruised but not broken! bummed I wasn’t able to race last night but we will get some therapy done this week and try again next weekend huge thank you to the whole @starracingyamaha team for being so patient with me! We will get there”

JMC Motorsports Husqvarna's Wilson Fleming went down hard in 250SX East Region heat race on Saturday night in Atlanta, which caused the race to be red flagged and then a staggered restart.

According to his Instagram page, Fleming suffered a broken femur and clavicle.

"Just a little update for everyone. First off I’d like to thank the people that have contacted me and wished me well. I’m trying to get back to everyone but if I don’t I seriously appreciate it. Saturday was going amazing for me. I had qualified 17th and was running 9th in the heat race when I had one of my worst crashes ever. I ended up breaking my femur and my clavicle and have been recovering since surgery earlier this morning. @averysager@vin_murphy have been nothing but supportive in this dark time and they are doing all they can to keep me positive and helping me while I can’t walk. Also thank you to @tjalbright_ @dalen410vernazza@hannah172 for helping pack up everything!"

GIF OF THE WEEKend, PART II