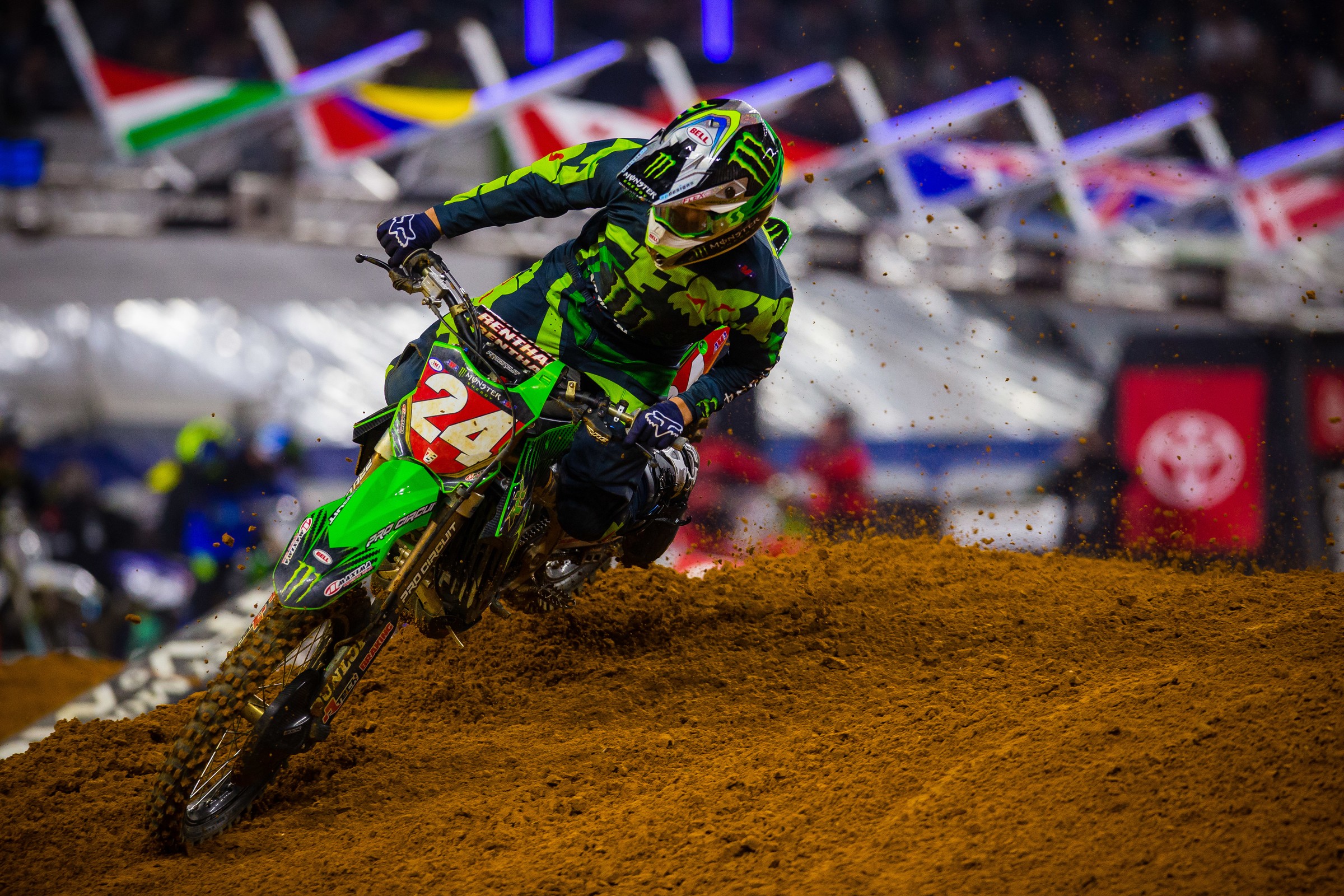 Redux News and Notes From Arlington

The official time between Red Bull KTM’s Cooper Webb and Honda HRC’s Ken Roczen, respectively, in the 450SX main event, the closest finish recorded in supercross since 2003, according to SX Research Department. The second closest finish since 2003 was in 2011 when American Honda's Trey Canard beat Rockstar Energy Suzuki's Ryan Dungey by 0.186 in Houston.

Wins in the last five races for Webb. He had zero career wins in 450SX entering the season.

Number of positions lost by Monster Energy’s Eli Tomac during the 450SX main event. Tomac led through lap four, but was passed by Roczen on the fifth lap and then fell on the seventh lap, before finishing 12th.

Number of laps completed for Rockstar Energy Husqvarna’s Zach Osborne in the 450SX main event in his 450 debut after he went over the berm a turn and did not finish the race.

Of 19 laps led by Monster Energy/Pro Circuit Kawasaki’s Austin Forkner in the 250SX East Region main event on Saturday. Forkner has now been perfect—recording the fastest qualifying time and leading all laps of both the rider’s heat race and all laps in the main event—in his first two races of the season. According to SX Research Department, in 2010 Monster Energy/Pro Circuit Kawasaki’s Jake Weimer recorded three perfect nights in five weeks in the Lites West Region—will Forkner tie Weimer’s record this season?

Of 39 laps led by Forkner through two rounds of the East Region.

Podiums to begin the season for Monster Energy/Yamalube/Star Racing Yamaha's Justin Cooper, who had one career start in 250SX entering 2019.

Number of riders who have made a 250SX main event through two rounds.

Number of riders who have made a 450SX main event through seven rounds.

“I feel good about my ride tonight. The track suited my style and I focused on riding a consistent race, hitting my marks every lap. I felt like I had a chance at a top three tonight, so I’m looking forward to next weekend in Detroit and getting back on the podium.”

“I’d say the day went pretty well—overall, I’m pretty happy with everything from qualifying all the way down to the main event. Times were really close in qualifying, which is cool because it shows there’s a lot of talent in the class but it also means if you’re a tenth off, you’re way back. I was happy to qualify in the top five, and in the heat race it obviously felt good to lead some laps and win the thing; it was also cool that Kenny won his heat, so we sort of shared that I guess.

“The main went pretty smoothly. I got off to a pretty bad start, but I was able to make some passes right away—like five guys in the first lap. I managed to eventually get into sixth and ride there for most of the race. I didn't really get too tired at the end, but after three rough weekends and seeing things finally coming together, I didn't want to push the issue too hard. For most of the race, the top six were running a similar pace, and it felt good to actually have sight of the leaders.”

“Crazy day of racing for me for sure. I felt good, the bike was working well. I had a pretty good practice, was right in the times, but in the heat race, didn’t get off to a good start. I was working my way through the pack and got taken out.

“In the main event, I was on the far outside and got a really good jump off the gate. I was right in it, but I was just so far outside I got pushed out and went into the hay bales and started last. I went from last to seventh. I was riding well, but again wasn’t able to make things happen that I needed to happen. I need to get a better start and put myself in front of the pack where I belong. We’re moving on from this weekend and will get ready for Detroit.”

“Tonight is a tough pill to swallow. I know the team and I expect better results but I am grateful to be leaving Dallas healthy and without injury, especially after my tip over in the main. This is part of racing, some things are out of my control and other things are completely manageable as well as fixable.  We’ll get back to work this week and work on those things as we head into the halfway point of the season. I still have a lot left in me and I plan on proving that, starting next week in Detroit.”

“I’m fired up. I have the speed, and I feel like I’m making major improvements with my starts, as well as my intensity in the opening laps. It’s time to get it done. I’m sick of looking at these dudes talk on the podium. It needs to be me now.”

“Justin Hill qualified very well. He finished second in his heat race and was feeling really good. He just didn’t have the intensity in the opening few laps of the main event. [Justin] Barcia took out his front wheel and he fell. That bent his bike up, and he couldn’t ride how he wanted to.”

“Not the night I expected. I had a good ride in my heat, just didn’t get the start I needed in the main. It’s unfortunate I went down as I feel I had the speed to battle into the top ten. We’ll make a few adjustments and be ready at Detroit next weekend.”

“Man, this weekend felt good! I felt great all day but I struggled a bit in the main because I was so focused on what I needed to fix from my heat race that the first five minutes I didn't really breathe. I got a bit winded after about halfway, but I was able to bounce back and create enough of a gap to pull off another win though. We’re two rounds in and I’m stoked on how well our program is doing. Back-to-back wins is exactly how you would want to kick off the season, and you can bet that we’ll roll into Detroit ready to go and to defend this red plate.”

“This race was one I wanted to get through healthy and I was able to do that. It was great to show that I’m capable of being up with the front runners and bounce back. I would love to get a better start next weekend and really contend for a podium spot.”

“Overall, I made improvements from the opening round in Minneapolis. I felt better in practice. We did some testing this past week and made some quality changes. Having said that, I’m still not where I want to be. I am better than my finish shows. I had a good start in my heat race, but then I slid a bit in the first turn and almost crashed. I figured things out for the main event and got a nice holeshot. Then I rode a bit tentative in the opening laps and got tight. From there, I had to play catch-up, trying to relax and breathe. We will keep working until we’re up on the box again. I’m excited for the Triple Crown in Detroit.”

“It was nice to be back racing in Texas for the first time in three years. Practice went well. I qualified sixth again, like last weekend. I was really happy with my riding and passed into third place in my heat race. I double-clutched the RM-Z250 off the start and came out just inside the top-ten. I was up to eighth on the second lap when [Mitchell] Oldenburg cleaned me out in a left-handed bowl turn. I struggled to get going again and salvaged an eighth-place finish. I’m not happy with the end result, but I’m feeling really great on the bike. I can’t wait for Detroit!”

Prior to his Monster Energy AMA Supercross debut in Minneapolis, Rockstar Energy Husqvarna rookie Thomas Covington told Racer X’s Jason Weigandt that supercross has been a “steep learning curve” and that he would be “happy to make the main event.”

Covington did make the main in Minneapolis and finished 11th. Arlington was not good for the rookie, though, as he qualified 25th and finished 17th in his heat race. The LCQ looked promising after he grabbed the holeshot, but he was quickly shuffled back and finished seventh.

“It really wasn’t a good day,” Covington said in a statement. “I struggled a bit in practice and in the heat race I was in a qualifying position and I went off the track and fell way back. I had to go to the LCQ and went inside of a guy to pass him and wasn’t able to jump the triple so a bunch of people went by me and I ended up not qualifying. I’m definitely not happy with this but all we can do is move forward and head to Detroit.”

After crashing in the opener and scoring a DNF, TiLube Honda’s Blake Wharton was looking to bounce back at his home race in Arlington. The Texan was in a good position in the 250SX main event, running in eighth before he suffered a bike malfunction.

“While running 8th we had a bike malfunction that kept us from finishing the race,” he wrote on Twitter. “Despite this set back I was able to get in some valuable laps with the top guys throughout the night, Definitely a step in the right direction! See you all in Detroit.”

Gif of the Week, Part II

The 250 LCQ in Minneapolis was so crazy that WWE’s Jim Ross had to make the calls. Read about the wild race on RacerXOnline.com.