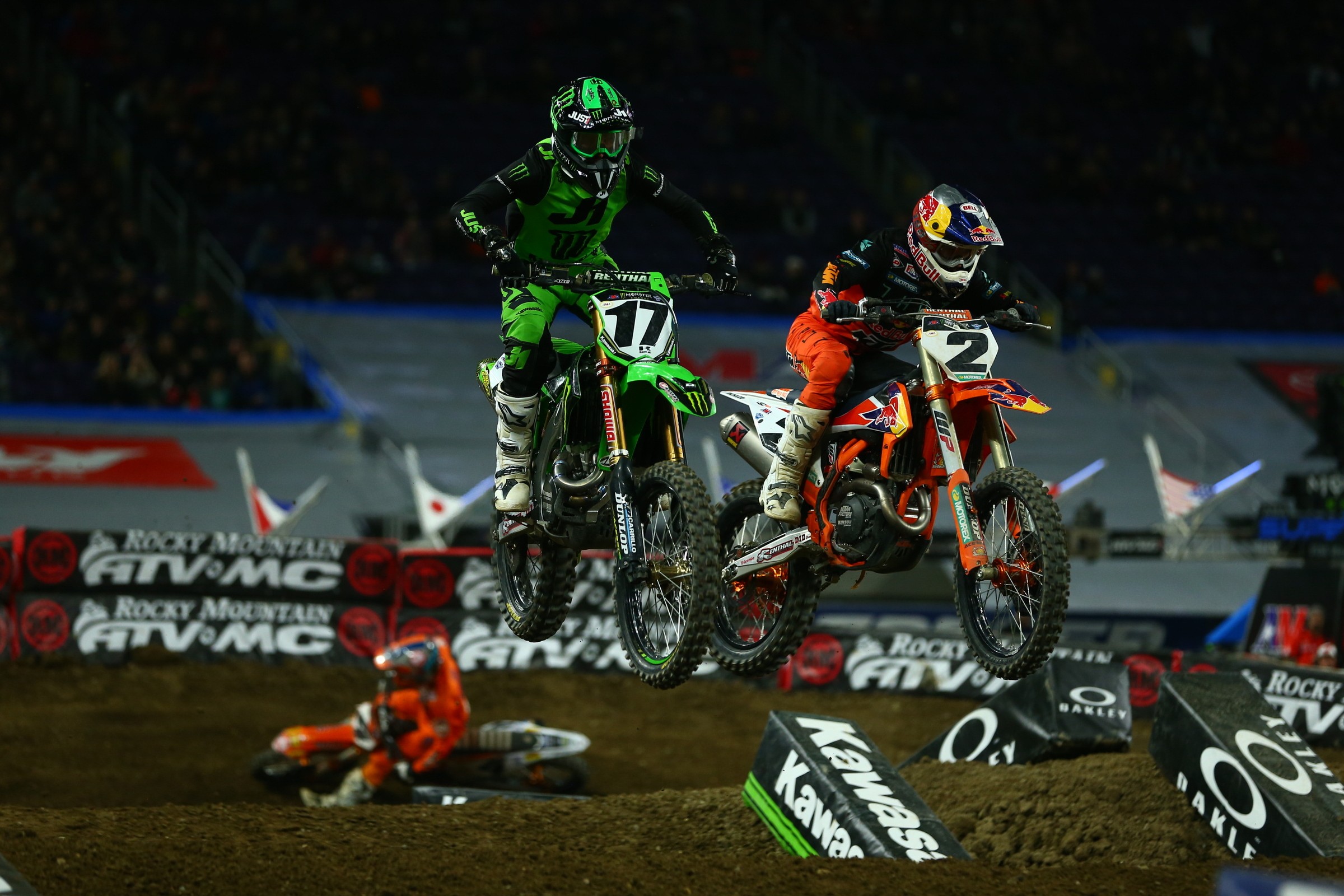 The 2019 season of Monster Energy Supercross won’t give up on the thrills and chills, as round six in Minneapolis, Minnesota’s U.S. Bank Stadium presented an instant-classic barnburner main event, with six riders battling in formation for the lead well past the halfway mark. It was an epic fight and symbolic of an incredible season that keeps setting records for tight points totals. After this one, more than a third into the season, just two points separate four riders in the standings.

But in the win column, one rider stands well ahead of the rest, with Red Bull KTM’s Cooper Webb avenging an endo in last week’s San Diego mudder to return to the top, his third win of the young season. Webb was strong all night, winning his heat and then battling for the lead in the main immediately with Joey Savatgy. It turned into a dogfight because of a strange reason—the track actually didn’t offer up much passing, which actually led to better racing, because as Webb couldn’t figure a way around Savatgy, Ken Roczen couldn’t get around Webb, and Blake Baggett couldn’t get around Roczen, and Justin Brayton couldn’t get around Baggett, and Marvin Musquin couldn’t get around Brayton. It was intense! It took more than half of the race for Webb to finally force Savatgy into a mistake.

“Yeah it was tough, it was really hard to pass, obviously, I could see the freight train we had going,” said Webb. “Not a lot of us were making mistakes. I didn’t want to wait too late, but I didn’t want to be too aggressive and go in for a pass and potentially lose positions. Once halfway came I knew I had to try to get him [Savatgy] flustered and get him to make a mistake. I felt like after the whoops if I squared him up right, I could get him if I really gave it a good effort. But I was able to kind of spook him a bit to where he missed his line, then he cased that triple and pretty much left the door wide open. In that situation you want to try new lines, but you’ve got a guy right on you. It was tough, but it was good to get a good start, too.”

Webb’s pass on Savatgy was key, because Roczen and Baggett might have been just as fast. But Cooper put the hammer down once he pulled away from Joey, and Roczen, Bagget and later Musquin (who passed Brayton) couldn’t get the Kawasaki rider.

“Yeah and no,” said Roczen, who finished second, when asked if he should have been more aggressive. “I just noticed that, once Cooper got by him, Cooper gapped us. I felt really good, and early on when Joey was still leading, I had a couple of good spots, and I kind of came up on Cooper a little bit. But I couldn’t pass him. After Cooper passed for the lead, I noticed that Joey was getting tired or whatever, but he was still going good enough where we couldn’t pass. I had to pick my battles a little bit. The way these turns are, and the intensity that we brought, I didn’t want to do a silly, aggressive move and bump up on the inside. I just wanted to do it in a smart way, but I waited too long, for sure.”

Once Roczen got through, Baggett and Musquin really started applying heat to Savatgy, and then Savatgy bobbled hard in a rhythm lane and both KTM riders shot past him in the whoops soon after. Then Baggett tossed it away violently in a rhythm lane. His race was done, but after taking a few minutes to collect himself, Baggett was able to ride his mangled bike off to the pits under his own power. This put Musquin into third.

“It was really tight racing and hard to pass, you see the leader not too far ahead of you but you know it’s going to be hard to get there,” said Musquin. “I was trying not to think championship, but late in the race I did kind of settle into third. Top four within two points, that’s pretty crazy. Makes it good for the fans and everyone else.”

Musquin was lucky to avoid Baggett’s flipping bike. “I was right behind him and I was worried for him because it was a gnarly crash,” said the Red Bull KTM rider. “The track was getting a gnarly kicker and I actually changed my line. Good thing I changed my line, actually, and I saw him going over the bars and I didn’t know where the bike was going to end up. Hopefully he’s okay.”

Savatgy ran a great race, but lost steam about 15 minutes in after facing relentless pressure the whole way. He held on for fourth, a career high in his young 450 career. Brayton, after a thumb injury that knocked him out of last weekend’s race, was back on form, winning a heat race and finishing fifth in the main.

Just as Webb followed a disappointing eighth last weekend with a win here, Eli Tomac went the opposite way, winning San Diego but then starting terribly here and only methodically pulling through for sixth. It takes the red plates off of his Monster Energy Kawasaki and hands them back over to Roczen.

250 SX East kicked off and Austin Forkner proved to be the real deal when it counted in the night show. The Monster Energy/Pro Circuit Kawasaki rider had a bunch of crashes in practice, but was rock-solid on a beat up track in his heat and the main event.

“Basically, you don’t want to think about not making mistakes because that’s when you make them. I was just trying to click off laps,” said Forkner. “My starts were killer tonight in the heat and the main. I was just out there trying to maintain it, and I saw, whenever Jordon [Smith] got into to second, I might have to try to turn it up. He was maybe going a little bit faster, but then he went down. But when you get to that settle stage, sometimes that’s when mistakes happen, so I just tried to keep focused forward.”

TLD/Red Bull KTM’s Smith looked smooth in the afternoon, but his main event was absolutely wild. It started with a flat tire on the parade lap for the main event! His team barely got the rear wheel changed out in time, and Smith hopped on the bike with, by his estimate, seven seconds to spare. Smith did a lot of battling, passing Chase Sexton, Alex Martin and Martin Davalos, only to fall himself, and then re-pass Alex Martin and Justin Cooper to net second.

“We got a flat tire and Christian, my mechanic did an amazing job,” said Smith about the wheel change. “They started the bikes before he had the nut off the rear wheel, I was afraid the gate was going to drop and we weren’t going to be ready.”

“A lot of mistakes out there coming from everyone,” said Cooper. “I just tried to let the race come to me, with two minutes left I knew it was time to make the pass or finish fourth, stuck the pass in there and took it home for third.”

Martin was quick all day and night on his JGR/Yoshimura Suzuki, and held Cooper at bay for nearly the whole main, in the search for a podium. He ended up bumped off the track by Cooper and missed the transponder line at the finish. His team had to go and request a manual rescoring of that lap for Alex to be credited with fourth place—he was first considered a lap down, and 11th, by not getting credit for the lap when he was bumped off of the finish line jump.

Chase Sexton was fourth on his GEICO Honda. He ran into the back of Alex Martin and crashed at one point. Mitchell Oldenburg was fifth. Martin Davalos, expected to be a title contender, had a rough night filled with crashes and finished 16th. Christian Craig, who only got back on a supercross track four days ago after an off-season thumb injury, struggled and salvaged 20th.