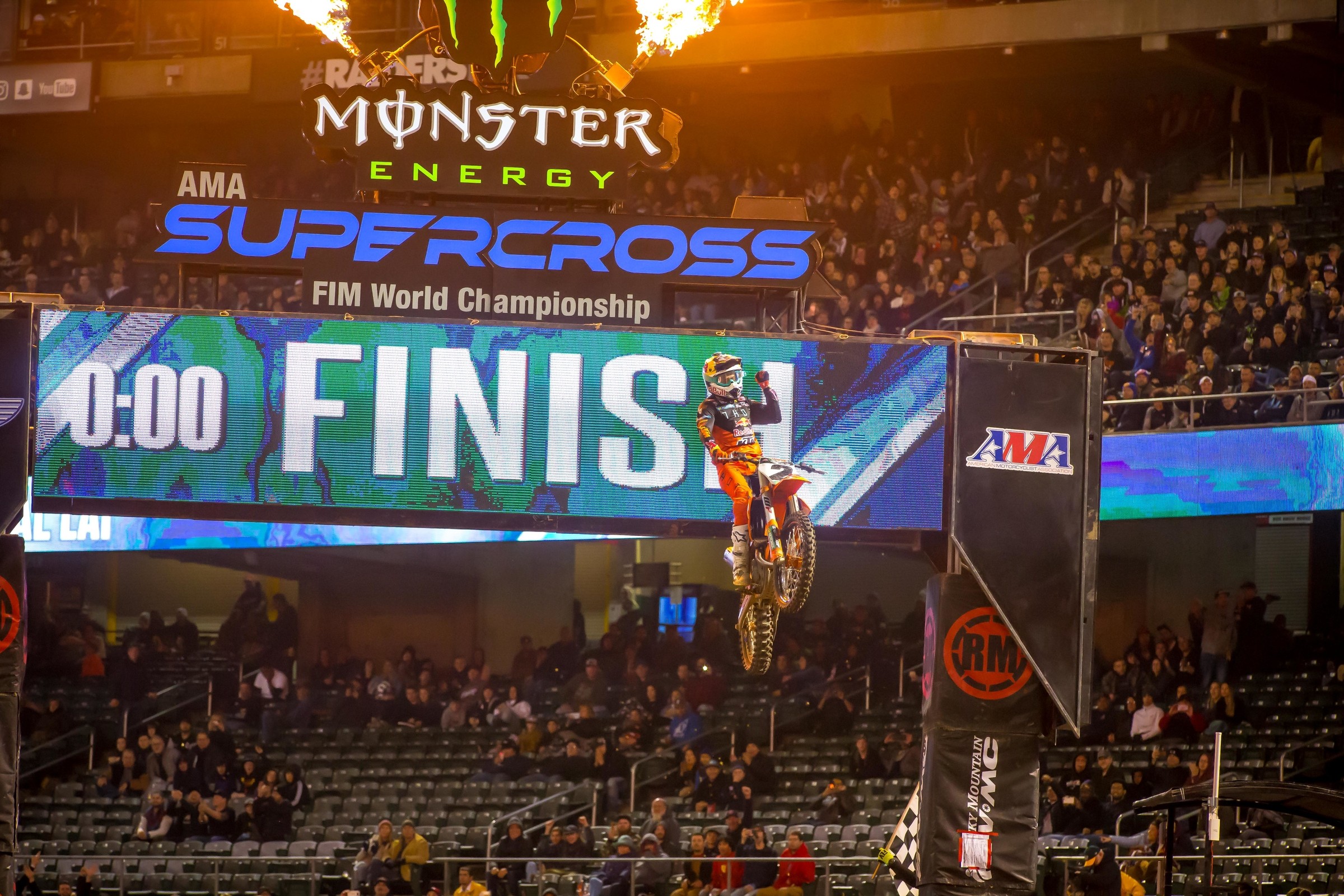 Before the season nobody had Cooper Webb pegged as winning two races and holding the points lead after four rounds. Not even Webb himself, who said, “Hell yeah,” in the Oakland press conference when asked if he was surprised how much he’d accomplished already. Webb’s wire-to-wire victory in Oakland solidified his status as a title contender and completely obliterated any Triple Crown related asterisk that may have been attached to his win at Anaheim 2. The only question now is, can he make it three in a row? –Aaron Hansel

No Room For Error

In 2012, everyone was going nuts how tight the points battle was after four rounds, and for good reason. Only twelve points separated the top four, Chad Reed and Ryan Dungey were tied for the lead, and four different riders had won the first four races. Well guess what? It’s much, much tighter right now. We don’t have a tie for the lead, but the top four are separated by a mere four points. When’s the last time you can remember when there were four guys who could easily leave the next round with the red plate? Well, never, because the points have literally never been this close at this stage of the Monster Energy AMA Supercross. Who’s going to leave San Diego with the points lead? –Hansel

Adam Cianciarulo probably doesn’t like hearing himself being described that way, but so far that’s the kind of season he’s been having, something he himself addressed in the Oakland press conference. After acknowledging his ups and downs (Anaheim 1 was a miss, Glendale a hit, Anaheim 2 a miss, and Oakland a hit) he explained it’s something he’s working on and believes he can correct. Going back-to-back in San Diego would go a long way toward making that belief a reality. –Hansel

A look at the results sheet reveals a DNF for Joey Savatgy, which in no way tells just how great he was riding in Oakland. The Monster Energy Kawasaki rider was third in qualifying, won his heat race, and moved up to second in the 450SX main before developing a mechanical problem that forced him to retire from the race. We’ll see if he can pick up in San Diego where he left off in Oakland before his bike let go. –Hansel

Another rider who had a great night going before experiencing a mishap was Cole Seely. In qualifying he was second-fastest overall and then was second in his heat race. He looked great in Oakland too, and it seemed like he was riding with a bit more aggression than normal. Unfortunately, he had a small crash in the main and it took a little while for him to get going again, resulting in an eleventh-place finish. If he rides like he did in Oakland this weekend, and keeps it on two wheels, expect him to finish much higher. -Hansel

Marvin Musquin was nice enough to allow Cooper Webb into the Baker’s Factory fold, and the Red Bull KTM team. Back in 2016, Cooper was Marvin’s trash-talking nemesis in the 250 ranks, never missing a chance to take a shot at the Frenchman. Cooper put down his sword this off-season and helped let the KTM crew, and Baker, re-mold him, and he now rides and trains with Marvin daily. This is honorable, and it has paid off for Webb. What did it do for Musquin? He’s ridden very well at the last two races, but all he has to show for it are two second-place finishes to…Webb! At Anaheim 2, Marvin caught Cooper late in the second Triple Crown race, but a late bobble helped Cooper get away, and that ultimately decided the overall. Last week, Marvin crashed, but came back to catch up to Cooper on the last lap. He ran out of time. How long until Marvin turns these second-place finishes into a win? -Jason Weigandt

Something just seems to work for Chad Reed at San Diego, he holds the most SX wins of anyone in this city, and he admitted to us recently that it’s not just from good riding. For example, Reed has zero supercross wins in the Phoenix/Glendale races, but he told us this year that he thinks he rides those tracks just as well as San Diego, but he never has racing luck on his side. Meanwhile, things seem to just magically come together for Reed in San Diego, and he could use that type of breakthrough right now. He’s been okay this season—11th in points with 9-13-14-9 finishes—but if he pulls a start, and recent rough weather makes the track tricky, and the magic comes into play again, he might get the fans cheering like the old days. -Weigandt

Justin Barcia did what he had to do at Oakland, riding through the pain of bruised tailbone to salvage seventh and remain within 11 points of the series’ lead. The Anaheim 1 race winner will continue to face a steep climb, though, because an extra week of healing isn’t going to get him back to 100 percent. Can he keep salvaging without losing too many points, or too much fitness, to stay in the hunt? -Weigandt

When you’re as good, talented, and successful as Eli Tomac and Ken Roczen, results get held to a higher standard, and so the fourth and fifth-place finishes, respectively, last week at Oakland looked a little strange. Roczen seemed to have the mojo of a race winner all night, but he faded late in the main, and Tomac couldn’t mount one of his signature charges. They’re both right there in the standings, and for two riders crushed by inconsistency issues through the years, that’s probably all that matters. Still, a win from either would really change the narrative of the early season-Weigandt

Insiders have been watching the San Diego weather report all week, and it has not, even once, looked good for Saturday. Forecasts for rain have wavered between 90 and 100 percent, which is ominous, however, it doesn’t take much to salvage a decent race track. Friday press day riding is cancelled so the track can remain under cover, and if the rain doesn’t dump on Saturday night, everything will be fine. If it isn’t? We’ve got more chaos in an already chaotic season. -Weigandt