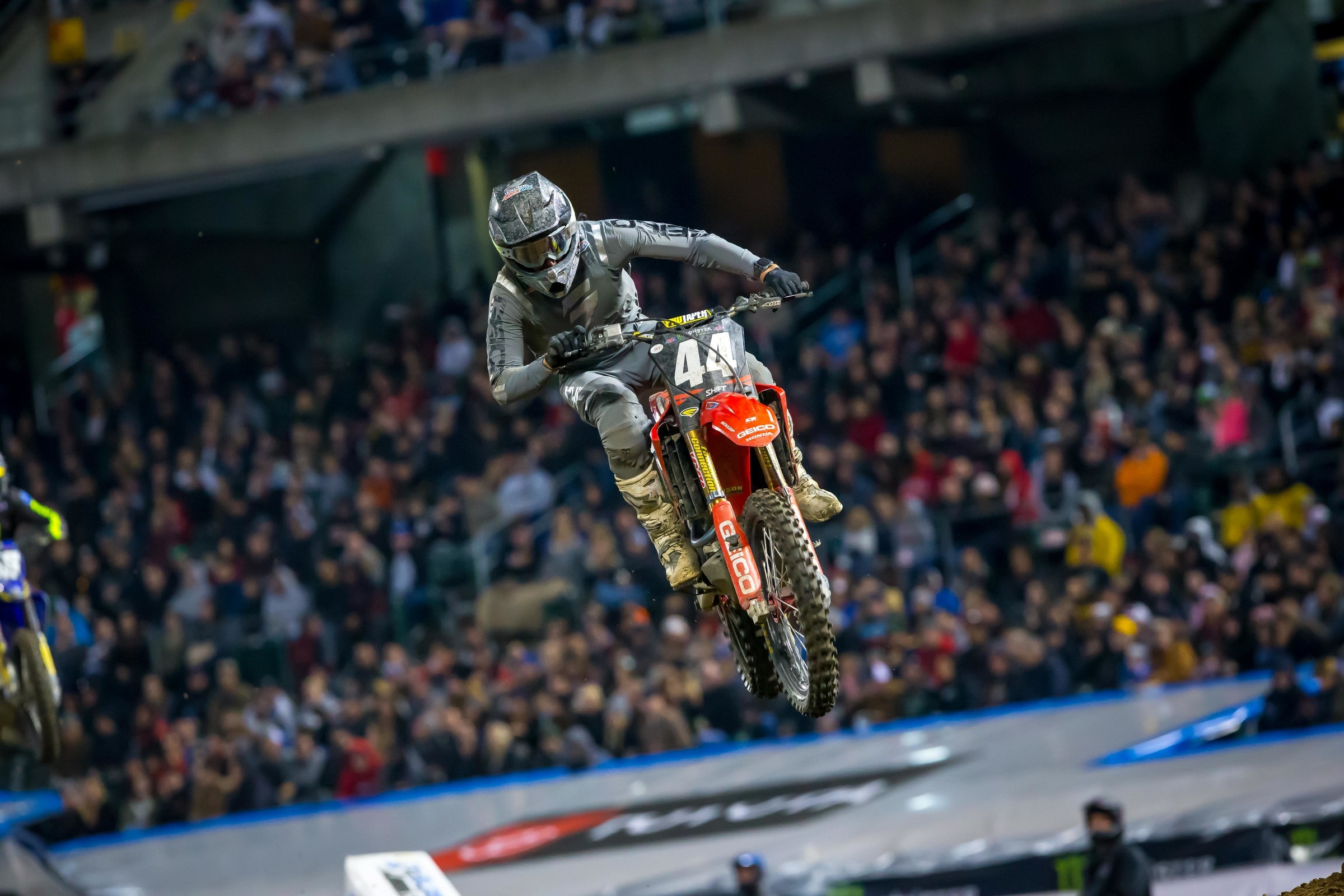 Colt Nichols, Adam Cianciarulo, Shane McElrath, and Dylan Ferrandis are separated by just five points at the top of the 250SX West Region standings. But like the 450SX, there’s a lot more action than just the fight for the podium.

In Oakland, a battle broke out between three riders looking for their first top five of the season. Jacob Hayes ended up getting it, edging Cameron McAdoo and Michael Mosiman.

Aaron Hansel caught up to all three after the race.

I’ve really been trying to get better each week. Been watching a lot of video from the races and studying it each week. I’ve been watching the top guys, how they attack the track in general. In arenacross the track was pretty basic and in supercross there’s a lot more that goes into it. I’ve really been working on upping my intensity. In free practice I was fourth, which is pretty good, although I know not everyone is out there trying to crush it. In the last one I battled my way onto the board two or three times and ended up fifth. That was my best in qualifying, and I’ve been really progressing with the team. I’m super thankful that they gave me this opportunity. I’ve been wanting to come to supercross for a long time, and they took a chance on me when nobody knew how I was going to do, including me. And tonight we got our first top five! It was sweet, it was a tough race. We got off to a good start and RJ [Hampshire] went down in one of the corners and I snuck around the top of the berm. A couple guys got me on the inside and that I was kind of bummed, it set me back. But the track suited me. I’m from the East Coast and I like the ruts. The whoops broke down, and it’s kind of like arenacross when they break down like that. I knew if I could keep my laps together and stay consistent I’d work my way up there. I got [Michael] Mosiman and got up on McAdoo. Just wanted to get by him and lay some good laps down, which I did.

Racer X: Take us through that battle with Cameron McAdoo.
Jacob Hayes: I was just trying to figure out where I wanted to get him. The whoops, everyone was saying they were tough, you guys could see that. I don’t know if this is a good thing to say, maybe it’s my age, but I was just pacing myself and just trying to figure out where I wanted to make a pass. I had a really good line I was setting up in front of the mechanics’ area, my trainer and I actually planned it out before the main event. I saw Marvin [Musquin] was doing it and it was a really good spot. So I just set him up on the inside there and it was a great pass for me. I worked on it for what felt like forever. It felt like half the main event went by. Battling, battling, battling. I was happy to make the pass, but once I did I made sure to put some really good laps down. I made a pass on Shane [McElrath] last weekend in the triple crown and he zapped me right back, which took all the wind out of my sails. So I knew I needed to get some fast laps down right away. It was awesome.

Where do you feel you’re at on the learning curve for supercross?
I want to say at round one I didn’t feel like a rookie, but when I left there, and I know it was a mudder, but in practice I felt like, ‘Hey, if I do all these rhythms and skim these whoops and do the right things, I’ll be just as fast as these guys.’ I learned very quickly, my eyes were opened up wide—each inch is tenths of seconds. I’ve paid attention to videos and have learned a lot. I got fifth tonight but I’m still not satisfied. I still feel like I’m a tick off those fast guys. They really bring the intensity in the main event. I’m not saying I want to get up there right away, but it would be nice. I’m not satisfied and I just want to get better.

It was good to get out front there. I thought I got the holeshot but then AC passed me, he kind of just sent in in there, and then Colt [Nichols] got around me. I felt like I had a good pace in third, I was running that pace with those guys, and I felt like there were a couple spots where I wanted to challenge and get Colt back. Probably around lap five I made two pretty good mistakes and Shane [McElrath] and Dylan [Ferrandis] got around me. Right then I tightened up and that was kind of it for me. I dropped back to sixth and finished there. But it was a really positive first seven laps, it’s something I really haven’t experienced yet. Had a good heat race too, which I’m kind of kicking myself in the butt for, for kind of giving the win away at the end. I’ve never had a heat race like that. It was a good night to build on.

Racer X: You battled with Jacob Hayes for fifth for a while. It looked intense.
Cameron McAdoo: To be honest it wasn’t.  Once Shane and Dylan got by me I tightened up and I really didn’t have much. There wasn’t a whole lot of swapping back and forth once he got me. It was pretty straight up, I was just tight. He was riding really good, and you just have to be there every lap. We’ll learn from it and I’ll ride my own race next weekend.

You’re back with GEICO after some injuries to the team. Are you feeling any extra pressure to get results with your second chance with the team?
No, I’m not. I think that was one of my biggest issues when I originally signed my first contract with GEICO. I was like, ‘Now I’m GEICO. It’s time. We gotta go!’ I put too much pressure on myself and I’d be at the races and I wasn’t having any fun. I realized that and this off-season I raced in Australia, I went to Paris and Geneva, and it really all came back. I was enjoying racing my dirt bike again. I was going to be racing East Coast so it wasn’t like I was out in the dry, and when I got the call from GEICO I was ready to get out and do the best I could every weekend and have fun doing it. When I’m having fun I’m riding my best. I need to learn to have fun on Saturday instead of being so stressed out. I’ve been dealing with less pressure, if anything.

I was on the line for the main event and I looked at my heart rate monitor and it was at 136. On the line! Sitting still! It was like, ‘Okay, I need to bring that down.’ Then the card went sideways and I got a poor jump. The guy next to me just ripped it. But I ran it in there pretty deep and made some quick moves on the start, which is really good for me. I think I ended up in fourth or fifth and was really racey in the beginning, which was good. I was right there with Shane [McElrath] and almost made a pass. From there I got into it a little bit with [Cameron] McAdoo. I made what I thought was a clean pass, we’re cool, and then he ran it in on me pretty good. I missed a rhythm and Jacob [Hayes] got by me and I lost some steam at the midway point. The track was tough too. My whoops toward the end of the main event were rough, I was just surviving. I pulled off a seventh but I’m not happy with it. I know I’m capable of more. It’s kind of a bummer.

Racer X: You don’t seem like you’re bummed out right now, you’re smiling and you seem like you’re in a good mood.
Michael Mosiman: Yeah, I don’t know, I think I’m able to move on fairly quickly and put things in perspective. I got back to the pits and talked with my mechanic for a little bit and was kind of down. Then I talked with two fans, these guys were like thirteen, and I talked to them for ten or fifteen minutes and that put it all in perspective.

You made their day man.
It helped put everything in perspective. There’s a part of me that thinks I should feel more, but there’s another part that’s happy that we’re getting better, we’re making progress. I was racey at the beginning and I was with those guys. I can see it all coming together. I’m not pleased, but I’ll sleep tonight.

Hometown race for you. How was that?
Yeah, that was cool! I got a bunch of people here. NorCal showed up man! People were telling me they were from Santa Rosa and Sebastopol, and it’s like, that’s so cool! It’s cool to [see] people coming from the area, to feel like I’ve had an impact in my small hometown. That was cool to see. And it was great getting to see some of my friends I don’t get to see as much because I don’t live here anymore. It was cool to hear the crowd making noise for me. It’s the first time I’ve ever experienced having a home race in supercross and it was awesome.