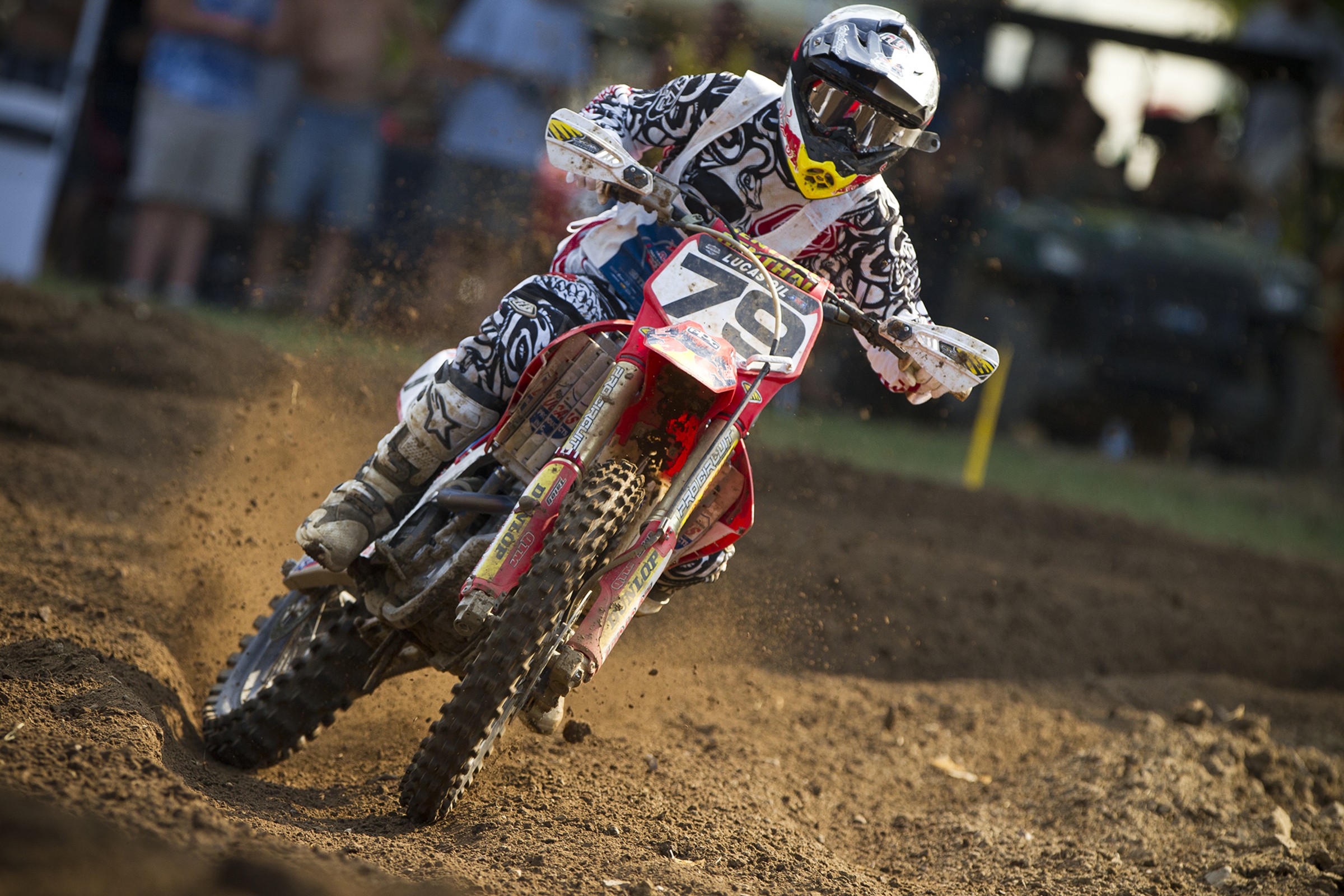 Ever since racing his 50cc bike, Jessy Nelson’s childhood dream was winning a supercross race. At only 11 years old, he was signed by American Suzuki. The 2006 AMA Youth Rider of the Year, he had won over 100 national championships at the amateur level. He had also had his fair share of struggles. A crash in 2007 resulted in a severed thumb on his left hand and caused his parents to prepare to move on from the sport.

“Me and mom were like, Well, this one’s over,” Bob Nelson said. “We’ll find something else to do. How the heck can you ride a motorcycle without a thumb?”

As profiled in this new documentary, Silver Linings: The Amazing Journey of Jessy Nelson: this isn’t a person who gives up easily. Bob Nelson said his son would simply not quit, and his passion for the sport kept him going. In 2013, Nelson lined up in the starting gate for his first Monster Energy AMA Supercross race at the season-opening Anaheim 1 and finished in 18th—after grabbing the holeshot and then endoing on the very first obstacle. Two years later, Nelson lined up in the starting gate at Anaheim 1. He again got the early lead. However, this time he was the first to get the checkered flag.

“Love you buddy! Good job, go ride around, take in in buddy!” Tyler Keefe, team manager for Troy Lee Designs/Lucas Oil KTM, said to his rider as the two embraced after.

“Probably one of the coolest things, watching him race that race,” Keefe recalled for the Silver Linings documentary. “He was just in his zone and did everything right.”

“To win the opening Anaheim, it was amazing,” Lee said. “I was screaming, I get excited easy. [Laughs] It was worth all of the late nights and it was a dream come true. It’s giving me chills right now, woo.”

Unfortunately, the 2015 Anaheim 1 race would be the only supercross—or motocross—race Nelson would ever win. In 2016, the Lucas Oil Pro Motocross Championship made its way to New Berlin, New York, for the round 10 Unadilla National. After a KTM rig next to Nelson’s team caught on fire the night before the race, Nelson later said, “The whole weekend was already just feeling a little weird to me.”

August 13, 2016, was the last time Nelson would race a motorcycle, something he had been doing all his life. He came into a turn but caught a track marker and went down hard.

“I guess the bike must’ve just hit me in the back or maybe just the perfect storm just the way I crashed,” Nelson said recalling the crash.

Keefe ran over the hill to Nelson and relayed Nelson’s message “I’m done,” to the rest of the team over the headset. Then he relayed the message that he couldn’t feel his legs. Nelson’s mechanic and friend Jordan Troxell still struggles to talk about hearing that phrase from his headset.

At the hospital, a doctor answered Nelson’s questions by saying he should get used to that chair he was sitting in, which really pissed him off. During the crash, Nelson suffered a broken T4 and T5 and a stretched spinal cord and it would eventually leave Nelson’s legs paralyzed.

For all racers, there’s a risk of major injury each time they line up—and Jessy had already dealt with it through the loss of his thumb.

“There’s always a chance,” Bob Nelson said in 2010 about the chances of injuries, “but I’m not going to take the dream away from him. No way.”

At first, Nelson struggled with such a massive life change. He could no longer walk, or ride a motorcycle. He said a small part of him died the day he crashed, and he was ready to throw the towel in until he saw a team neurologist.

“I just kept holding on to that light at the end of that tunnel,” he said, “like hopefully something will come from this.”

Nelson was at rock bottom. He realized he could only go up from there and a good mindset would help him do so. It’s helped that he has found a way to get some of the same rush he got from motorcycles by driving, using a modified Polaris RZR. Sometimes, he drives for fun, with his wife Emily. Other times, he’s a hard-nosed competitor, and he’s finding success.

While Nelson needs a specialized vehicle to drive, he can still see himself racing a Trophy Truck one day.

It isn’t a motorcycle but I’m just as happy when I’m behind the wheel, I have found something other than Emily and dirt bikes that makes me enjoy my life to the fullest. This weekend I returned to a race track after a two year hiatus from a spinal cord injury in my back and racing is what I love so I’m doing just that on four wheels now. My first race I ended up getting disqualified for illegal passing and illegal pit due to the loss of power steering and 4 wheel drive. The next day I started on the back row of my class and got the holeshot in my row, had a roll over in the back that ultimately cost me a better result, but I had an absolute blast and can’t wait to see what I can do in this different aspect of racing all in all a 3rd place for my 2nd day driving this new car I can’t complain and never been so happy with a 3rd ??thank you so much to everyone who made this happen for me, especially @polarisrzr @troyleedesigns @craig.scanlon @walkerevansracing @reidnordin @mike_emerson44 @rj37offroad @vpracingfuels @road2recovery @ryanwaltersfilms @imperialmotion @tld_moto @chrisneuer28 @sparcousa @pbfabrication @cagewrx @redbull @bfgoodrichtires @methodracewheels @ethika @kenroczen94 and the whole Gardner family ➡️ @gmhmotorsports for all that they do to help @emily_everett5 and I out when it’s the two of us trying to make this thing happen. If anyone is in a wheelchair like myself wanting to get into driving or find more info about my hand controls from @holzracingproducts just ask away ?? thank you everyone for the positive words and encouragement. I should have a video coming soon about my race weekend and the people helping me out along with how @kenroczen94 and @csavage762 got on board with my program. ??much love, Jessy & Emily!

“I look at who’s racing and I’m like, yeah, I’m not walking,” he said, “but what’s the difference between him or her and I?”

Lee said three years ago he suffered a pretty bad injury himself, but he thought about Nelson and came to a realization.

“These things, if it doesn’t kill you, it makes you stronger….I got hurt three years ago myself, pretty bad,” Lee said, “told my wife I wouldn’t race anymore. After this happened, I was like ‘God, we are only on a short period of time, we have to do what makes us happy and we’ve gotta do what we love to do…and Jessy’s made the best of it.”

Nelson plans on racing his Polaris in the Lucas Oil Off Road Racing Circuit later this year. While he isn’t racing motorcycles anymore, Nelson is doing what makes him happy now. He made an appearance on Steve Matthes’ PulpMX Show a few weeks ago and talked about his journey and racing UTVs. He has won two out of the three UTV races he has competed in so far—after being disqualified in his first one.

I love this thing ? @polarisrzr xp1000 will surely put a smile on anyone’s face. Got some new shoes on her as well courtesy of @methodracewheels and @bfgoodrichtires

“I wasn’t done racing for me,” he said, “so this is another way for me to fulfill something and I’m not done yet, that’s for sure.”

He talked about the similarities between racing motorcycles and UTVs.

“I think the biggest thing [that translated over] is how hard I can push,” he said. “In a motorcycle you have to be a lot more precise than you do on four wheels.”

Nelson said he doesn’t think he would change anything if he could. He’s still a racer, and more success could be on the horizon. Check out more on Jessy Nelson in Silver Linings: The Amazing Journey of Jessy Nelson below: