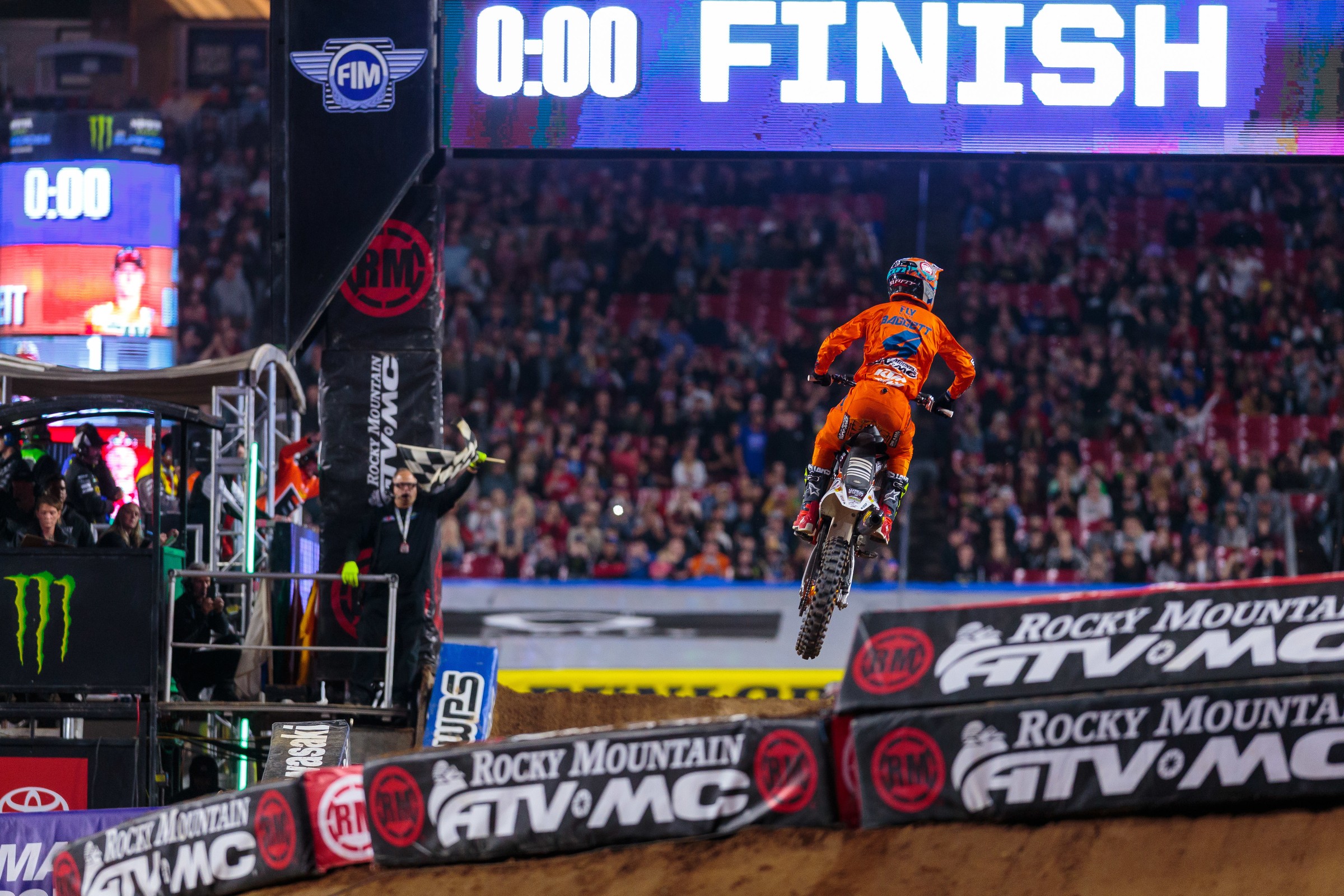 With rain in the forecast for much of the week in Anaheim, the Dirt Wurx crew—tracks builders for the championship—hurried to get the track built for round three and get it covered. (You can check out how they did it here.) Press day riding was canceled for today, but the good news is no rain is forecasted for today or tomorrow. Once the covers come off, we’ll get a better idea of what the track will look like. Keep an eye on qualifying to see how it’s holding up. -Chase Stallo

Strange start to the new year for defending champion Jason Anderson. After struggling to a 14th place finish at the opener—the worst for a defending champion since Ryan Villopoto finished 16th at A1 in 2013—Anderson admitted he was a bit “overwhelmed with everything,” but he bounced back with a second place finish in Glendale. “It was crazy. It was just a lot of stuff going on,” Anderson said regarding Anaheim 1 after Glendale. “Not only from obligations and stuff like that, but I had a horrible heat race and they wanted to do the ring presentation for the championship and it was just a lot. I was just not in the right head place to be racing, to be honest.” Expect more of the Glendale Jason Anderson than the A1 Jason Anderson this weekend. -Stallo

For the first time since his career threatening arm injury, Honda HRC’s Ken Roczen will enter a round of Monster Energy AMA Supercross with the red plates. This Saturday will mark the two-year anniversary of Roczen’s injury, sustained at Anaheim 2 on January 21, 2017. Through two rounds in 2019, Roczen is the only 450 rider with two podiums and currently holds a slim one point lead over Anaheim 1 winner Justin Barcia. “We’re on the right path,” Roczen said after leading six laps at Glendale before finishing third. “I’m trying to stay focused and consistent, and I’m looking to get some more races under my belt. The last couple years I have hardly raced past the first five races.” Roczen was off to a strong start last weekend in Glendale before the red flag and before his incident with Jason Anderson and seems primed for his first win since January 14, 2017. Can he get it this weekend? -Stallo

What A Difference a Year Makes

No, Eli Tomac is probably not ecstatic with 3-4 finishes to begin the season—and he’s especially not happy having to go through the LCQ last weekend—but the silver lining for Tomac is quite simple: through two rounds in 2018, he had one point! Yes, one point, after crashing while leading the opener and missing round two. Tomac, who sits in third in the points standings, trails Roczen by just four points entering the weekend—for comparison, he trailed Jason Anderson by 48 points through two rounds last year—and could take over the red plates with a strong weekend. Tomac won two of three Triple Crown races in 2018, can he grab another one this weekend? -Stallo

We’ve covered the changes to the Triple Crown already, and even had JT, Weege, and Matthes weigh in, but we will recap here in case you missed it. The lengths of each main event have changed this year. Now, 250SX will race three 10 min plus 1 lap mains, while 450SX will race three 12 min plus 1 lap mains. Also new for this year, riders may use up to two motorcycles throughout the event. In 2018, 450SX saw five different winners in nine main events; how many will we see this weekend? -Stallo

When it Rains, it Pours

No, we’re not referring to the weather here. We’re talking about Mitchell Harrison and the black cloud that’s been hanging over his head since the start of the season. Thanks to mechanical issues, Harrison didn’t make the main at A1. Then, as the 250SX parade lap was getting underway in Glendale, a motor problem struck, effectively ending his night just as he was about to get down to main event business. Unless he has more weird luck, look for Harrison to compete in his first main event of the season on Saturday night. –Aaron Hansel

Very few people had Blake Baggett pegged to take the win last week in Glendale. After all, he was 12th in Anaheim and was only 15th fastest during qualifying in Glendale. On top of that, his best result— since joining the 450SX Class in 2015—prior to Glendale was third. Of course, none of that mattered at all last Saturday night—Baggett hunted down the defending champ, went around him on the outside, and checked out for the first win of his 450SX career. We’ll see if more follow now that he’s got the first one out of the way. -Hansel

Despite a somewhat rocky start to the season at A1, Adam Cianciarulo is off to his best start in three years (he missed 2015 and 2016). After taking fifth in Anaheim and winning in Glendale, the Monster Energy/Pro Circuit Kawasaki rider sits in second place in the 250SX West Region with 44 points. Last year at this point he was fourth with 37 points, and in 2017 he was fifth with 30 points after the first two rounds. He’s only five points out of the lead right now, too. If things go his way in Anaheim on Saturday, there’s a chance he could leave with the red plates for the first time since 2014. –Hansel

Not to be Outdone

For the most part, everything we just said about Cianciarulo applies to Colt Nichols as well. Only he doesn’t need things to go his way to get the red plates because he’s already got it! He’s also off to the best start of his career, by far. In addition to holding the points lead, he has yet to finish off the podium. We’ll see if he uses this weekend to extend his points lead. -Hansel

Racing has a way of creating situations that are beyond control, which was the case for Jacob Hayes in Glendale. The CycleTrader/Rock River Yamaha rider was having a solid night and was running sixth on lap 14 of 16 when he and Enzo Lopes tangled as Hayes was lapping Lopes. Just like that, Hayes lost a ton of positions and ended up finishing 17th. Look for Hayes to bounce back in Anaheim and earn a position that’s more in line with what he’s capable of. -Hansel