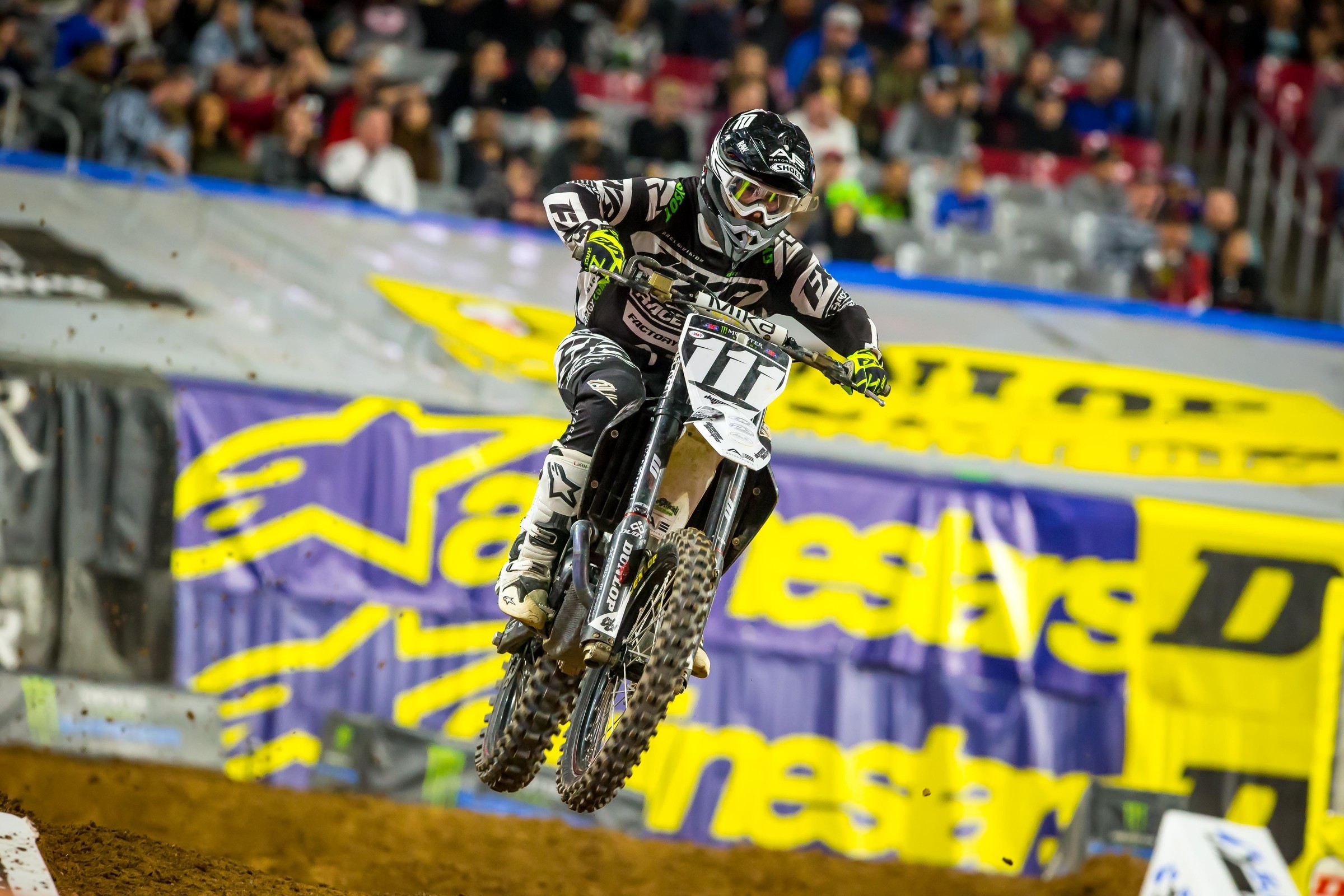 Chris Blose has been at the supercross game a long time, first known as the little brother of prospect Michael Blose, and then later as a standout of his own via top-five 250SX finishes, and years of solid 450SX results. Blose found a good home in arenacross for a few years and battled for the title each year, but now that the series is gone, he’s back in supercross with the Gas Monkey Energy/AJE Motorsports team.

Chris hasn’t missed a beat, taking 9-7 finishes in the first two 250SX West Region rounds. We talked to him after Glendale, the home race for the Phoenix, Arizona, native.

Racer X: How many years did you not race supercross?
Chris Blose: Four.

Four seasons? It doesn’t honestly seem that way. You were good both these weeks. It seems like the transition back here has been pretty easy.
Yeah. I raced supercross for a long time, from 2006 to 2014 and then arenacross from there on, and now I’m back. It definitely feels good to be back. Just really happy about it. I feel like I’m in a good place. The team has been awesome. I’m just out here having fun. I feel like I’m the old guy in the class now. Just trying to keep up with these youngsters.

This main event was starting to roll. You were starting to close in on guys. It was looking promising for a while there.
The main event was actually pretty good. Got off to a decent start. I think Jacob [Hayes] got by me, but that was really the only person that I got passed by. I knew the track was going to be super hard pack, slippery, so it was going to be one of those races where you couldn’t really push the envelope. You had to let the race come to you. That’s what I did. The whoops were I think black all the way across! Just getting through the whoops clean every single lap and hitting your marks, I knew it was going to be key for this race.

When you and Hayes were closing in, I was thinking, we’ve got an arenacross battle here! Surely you were thinking this.
Yeah. Even at Anaheim 1 we couldn’t get away from each other, and then this race we can’t get away from each other. It’s good. Jacob’s been riding awesome. It seems like we are stuck on the track. It’s going to be a good year. Just got to stay healthy.

The arenacross series didn’t end the way you wanted it to with an injury. Did that put you behind at all as far as training, or did you come in just as prepared as you would have been had you not got the injury?
Obviously the injuries set you back quite a bit, especially with the ACL and meniscus injury which I had. But I don’t feel that I was hindered by my training program or getting prepared for this season. Everything went great with physical therapy. The doctor was 100 percent happy. My training with Jared Becker was on point. So we’ve just got to continue doing that and hopefully we got to continue getting better and better. I want a top five, for sure.

One of the common things that people who come from arenacross talk about is that arenacross helps them with intensity. So do you feel like, especially in the heat races when everything is a brawl, the time you had in arenacross helps you?
Yeah. Arenacross you have to get the start. You had to be wide open the entire time. I think that taught me a lot with intensity, like you said. It definitely helps, but at the same time I feel like I’m experienced enough to also do well on tracks like tonight, where you’ve got to be patient with everything. You have to play it race by race.

Do you ever have to dial the intensity down a little bit? Like, I can’t just slam this dude, like you would if you were in arenacross?
Yeah. There’s times where you just want to dive in on someone and make an aggressive pass and it’s like, okay, maybe I shouldn't do that yet. You kind of let the race come to you just a little bit. But there’s times and places where you do got to ramp it up a little bit and be aggressive. That’s why I feel like arenacross has helped me.

Were you worried when the series shut down? This team stepped up. They got a new sponsor. They’ve been around a little bit. Did this come together quickly, or was there a time where you were like, “Uh oh, what am I going to do to get a ride?”
Yeah. We knew at the last round that arenacross was going to be ending. Obviously I got hurt. My main focus was to get healthy and get back to 100 percent. The whole Gas Monkey Energy/AJE Motorsports team, it’s a local team here in Phoenix. Tony, the team owner, called me and I would say probably within a week we had a deal and we were all signed up and ready to go. It was awesome to have a home team, finally.

This is your home race, too, right?
Yeah. I was born and raised here. Lived here my whole life. I go to California here and there, but other than that, I stay here in Phoenix.

Talk about that team dynamic a little bit. You mentioned you are kind of the older guy in the group. Do the other guys on the team kind of look to you for veteran advice? What’s that team dynamic like?
It’s good. We’ve got Justin Starling and Dylan Merriam. They’re both awesome riders. They’re younger, obviously. They strive to be good, and if they have questions they ask me. The relationship is obviously there. It’s been great. It’s good to be, I guess kind of the old guy, because you can kind of tell them, “Hey, this is going to work, this isn’t going to work.” Even Dylan today was just kind of just struggling. “Hey, what’s going on? What can you do to get better?” and I just gave him a little bit of that. I kind of like that aspect of it, being the older guy. I would say kind of my career is not going to come to an end, but obviously I’m at the tail end of it, so if I can guide some younger riders to be better, then that’s awesome.