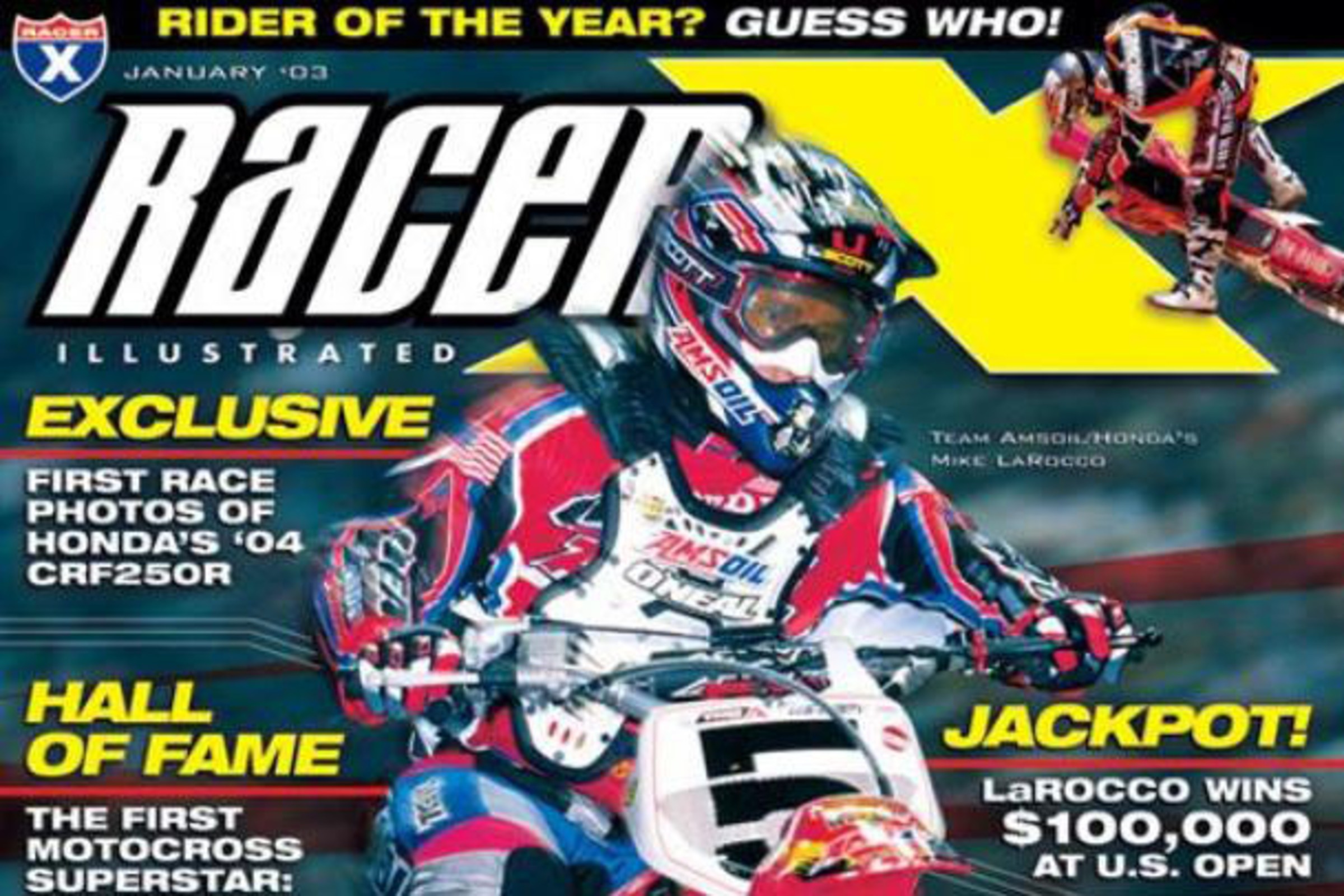 On This Day in Moto December 23

We're getting very close to Christmas so there's not much that goes on in moto on a day like December 23, so we thought we would look back at few of our own Racer X covers to tell a story or three about how and why they happened.

Mike LaRocco lands on the cover of the January 2003 Racer X Illustrated, which was on the newsstands on December 23, 2002. LaRocco was riding on Factory Connection Honda in the 250 class, a precursor to what has morphed into the GEICO Honda team, which he managed after he retired from his own AMA Motorcycle Hall of Fame career. He made the cover after winning the $100,000 first prize at the U.S. Open of Supercross at the MGM Grand Garden Casino back in October.

Fast forward eleven issues to December 2003 and Stefan Everts earns the cover, the first time we had ever featured a Grand Prix racer on the cover of the magazine. Everts had just pulled off the unthinkable, never-matched feat of winning all three classes at the final round of the 2003 FIM World Motocross Championships on three different Yamahas. The series was run by Dorna at the time, who purchased it from Action Group, which was the precursor of what is now Youthstream (Giuseppe Luongo bought the series back from road racing giant Dorna when the Spanish company found dirt bikes incompatible with their MotoGP series model). One thing Dorna tried was a one-motor format, which was widely panned by motocross traditionalists. But it was Everts who single-handily doomed the one-motor format by deciding early in 2003 to race the 125 class as well as the 250 class aboard a YZ250F and a YZ450F, and started sweeping both races. When he got to the last GP in France having already clinched the 250 title, the superbly fit Everts decided to ride all three classes. He won, making him the only rider in FIM Motocross history to not only win two GPs on the same day, which he did eight times, but the only man to win three GPs on the same day! After that, the FIM went back to the two-motor format to keep any one rider from dominating like Everts did in 2003.

When Ricky Carmichael switched from Honda to Suzuki at the end of the 2004 season, it was stunning news. The contract with Suzuki was actually signed back on April 2, 2004, after Honda did not come to terms with the reigning AMA Supercross and 250 Pro Motocross Champion, as RC was out with a knee injury and Honda figured he would not be the same when he came back. So Ricky switched to Suzuki, but then gave Honda a farewell present in the form of a 24-0 run through the 2004 AMA Pro Motocross Championship aboard a Honda CRF450. And when he first got on Suzuki, former Dirt Rider editor Ken Faught went out and shot photos of RC on the RM for this cover of Racer X Illustrated.

But here's the thing: Carmichael would quickly end Suzuki's lack of an AMA Supercross Championship that went all the way back to Mark Barnett in 1981, winning the 2005 title and then adding another in 2006. At the same time, Honda has not won either the Monster Energy AMA Supercross title nor the Lucas Oil AMA Pro Motocross 450 title ever since Carmichael left.

Add it all up, and this is the cover that began the process of not only breaking Suzuki's AMA Supercross curse, but also the beginning of Honda's AMA Supercross AND  450 Pro Motocross curse. That's right: Honda has not won a major AMA title in the entire 450 four-stroke era.