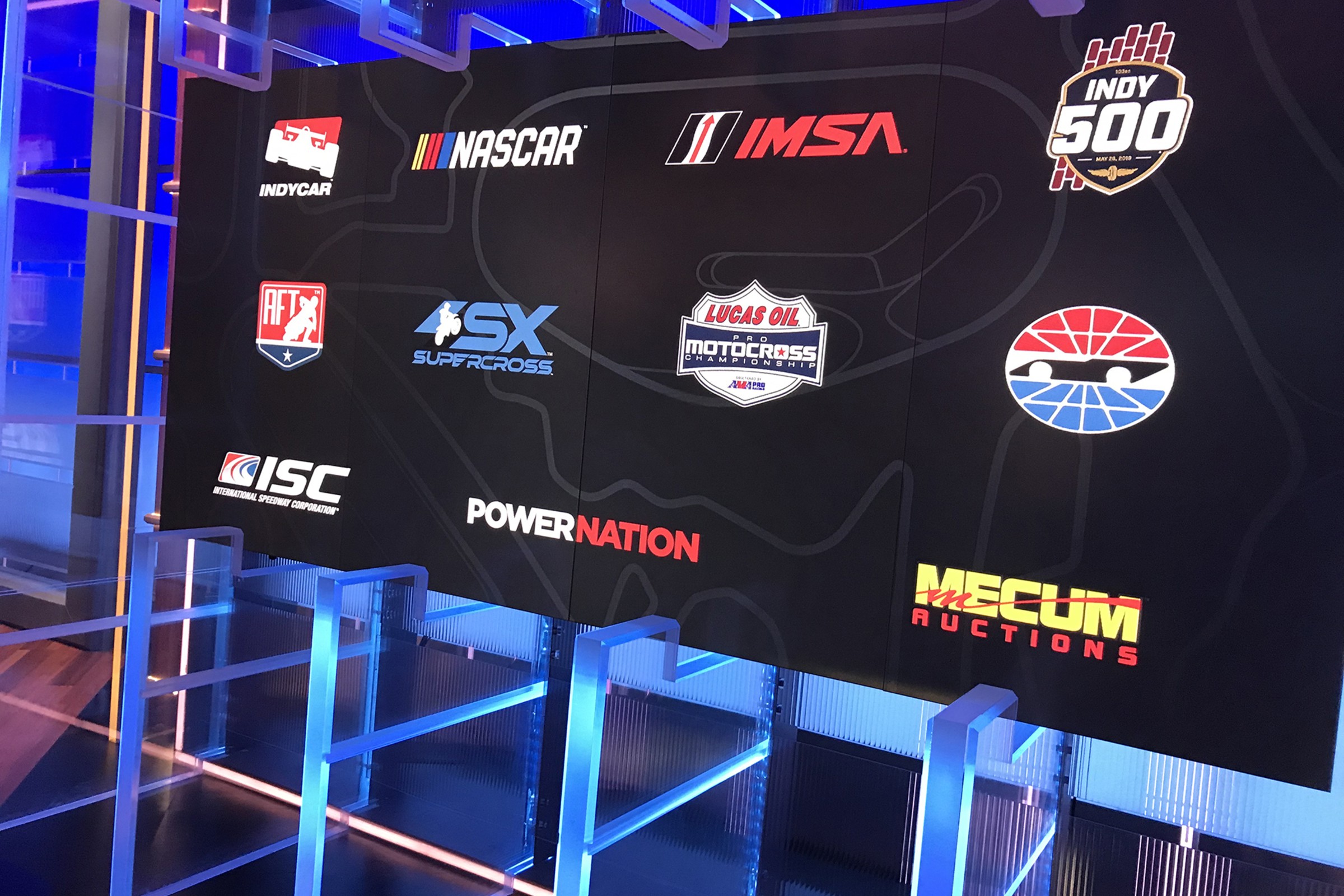 Welcome to Racerhead, where we’re finally inching closer to the finish line of the off-season. We've got three weeks before Anaheim 1, with a whole bunch of holidays and holiday parties between now and then. And we all got great news today when the television and online streaming deal for Monster Energy AMA Supercross was finally announced: Feld Motor Sports and the NBC Sports Group have teamed up for the coverage for 2019 and beyond.

I have to admit that we've known this deal was the works for a while, as NBC Sports Group has partnered with MX Sports Pro Racing and Lucas Oil Pro Motocross for the last ten years and just signed an extension. We had the opportunity recently to meet with NBC at their Stamford, Connecticut, headquarters, along with all of their other motorsports partners, including the folks from Feld Motor Sports, NASCAR, IndyCar, Mecum Auctions, American Flat Track, and more. It's become obvious that NBC Sports Group has become America's motorsports network, and just being in the room with all of those series promoters and track organizations like International Speedway Corporation and Speedway Motorsports Inc. was both inspiring and informative. I also think it's going to help supercross and motocross in America to be on the same network. I know that I already bought myself a Christmas present: the Monster Energy AMA Supercross NBC Sports Gold Pass, for $74.99, so I won't miss a thing in 2019.

We will have more on how the whole deal came together below.

Speaking of 2019, there is another very cool deal that will be happening in harmony with the Ricky Carmichael AMA Amateur Supercross at Daytona International Speedway in March. Once upon a time, Daytona was the first "stadium motocross” race when it got up and running in 1971, a year and half before the first Superbowl of Motocross at the Los Angeles Coliseum. Since then, the race has been a round of the Florida Winter-AMA Series, then the AMA National Motocross Series ('73), and ultimately the first round of the 1974 Yamaha Super Series of Stadium Motocross, which is of course now called Monster Energy AMA Supercross.

With this being the 10th Annual Ricky Carmichael SX, the GOAT wanted to open the race to something special as a salute to the grassroots of the Daytona race (which he actually did back in the day as a 65cc and 85cc rider in the eighties and early nineties, when Daytona was doing the original amateur supercross events). After the Sunday/Monday (March 11-12) amateur races, Ricky wanted to make room for vintage motocross racing on a more toned-down track and give the retro guys and vintage moto enthusiasts a chance to come and be part of the event. As a result, the 10th Annual Ricky Carmichael AMA Amateur Supercross at Daytona will now have a full day dedicated to vintage motocross racing on Tuesday, March 13, with classes ranging from Evolution to Revolution, which means everything from 1974 and earlier, up through 2008 bikes. Here's the full list of classes for the Ricky Carmichael Vintage Supercross race.

We told Carmichael if he wanted to race in his own vintage event, we'll give him his bike back from our office lobby!

As far as we know, this is the first Vintage Supercross, which kind of makes us feel old, but it's also pretty cool that it's happening in the same infield where it all started back in the day. And to have the GOAT on the line would be pretty cool (but only if he gives us our bike back). Sign up now and give the vintage rider in your life (or yourself) a pretty cool Christmas gift!

The long-awaited 2019 Monster Energy AMA Supercross TV schedule was finally announced today, and it includes the huge move to a new network. The NBC Sports Group is the new home for SX TV, which means most races will air on NBCSN, with some NBC (main network) broadcasts, and all of them available via the streaming service NBC Sports Gold.

Supercross switched from ESPN to Speed (which later became Fox Sports 1) in 2006, so this is the first actual network switch in 13 years. It’s a big deal.

The TV schedule is going to draw some ire because, from what I can tell, only ten rounds air live. It’s not quite up to the every-race-live-on-TV standards we now accept as standard. That’s where NBC Sports Gold steps in, allowing you to watch every race live and on demand, and it includes practice. The supercross package by itself is $74.99, but you can combine all the rounds of Monster Energy AMA Supercross and Lucas Oil Pro Motocross for $89.99. I feel like fans have been yelling for years about just having a way to pay and watch whatever they want live. NBC Sports Gold allows exactly that. Go here for info on it.

I have to wonder if the timing of this deal might have impacted the TV time—it’s pretty darned late to put a 17-week schedule together, and NBCSN probably had stuff in the place of some of the supercross time slots already. Most of the non-live airings are only delayed an hour or two, which makes me think the network had already committed something to those time slots before the supercross deal was done. This is a multi-year deal, so let’s hope it improves for next season.

By the way, full disclosure: I do get a paycheck from NBC to announce Lucas Oil Pro Motocross, but that doesn’t mean I have any insight to how these deals work. Today, we’re just the messenger. What other changes will we see now that supercross is on a new network? We won’t have to wait long to find out. The opening round at Anaheim is only three weeks away!

In the listings for December 12's On This Day in Motocross, we included an ad for a National Mini-Bike Championship Race and noted how different that kind of race must be with what we have now with the big amateur championships. Our longtime friend and fellow moto historian Norm Bigelow sent a note with more information about those races, which were sanctioned by the Southern California Mini Bike & Kart Association:

Thanks for all the hard work on those back in the day history articles. I know how much time they take to do and us old-school guys really enjoy them. Hopefully the new generation can learn a few things from the early days... What caught my eye a few days ago was the Mini-Bike Championships post. That little club, the Southern California Mini-Bike + Cart association was the first place to give us young kids somewhere to race and learn how to compete. You should have seen how fast a Briggs and Stratton engine can go running on alcohol! The club taught us kids so many skills, paving the way for bigger things. I look back at the events which I was a part of in the 7 hp-and-over class and see the talent that came from this little club and its amazing how about future world champs, national champs, SoCal legends were there. Names like Wayne Rainey, Bruce Penhall, Shawn and Kelly Moran, Jeff Ward, Dave Carlson, DMC Dave Miller, Nascar VP executive Scott Miller, Stu Egli, Zach Barrett, Tom Corey, Morris Malone, Rick Asch, Todd Peterson, Rick Hendricksen on and on. The club lasted a few years until the "minicycle" appeared and then disappeared as the minicycle class was absorbed into the motorcycle events. Sounds like a feature article for racer X someday!

Here is a very cool glimpse of the new book Will to Victory by Racer X contributor Roddy McLeod. We will include information in the random notes to order your copy of this brilliant hard-back book for your home library.

One of our more popular subscription promotions each year is our Racer X Calendar, and for 2019 our theme is the 13 Greatest AMA Motocrossers of All Time. It’s funny how this item always seems to cause reaction from readers. In years’ past we’ve covered a ton of different themes like old racetracks, specific riders, different eras, etc. We might be biased… but we really think we knocked it out of the park with our ’19 calendar. Subscribe now for as low as $9.98 and get your calendar for this upcoming year.

We spotted this very cool video on OG Daytona promoter Bill West's Facebook page, from his old track at Fort Pierce, posted by Mark Maj, and it's from the 1973 Florida Winter-AMA Series and just seems perfect for this announcement.

Racer X European contributor and On Track Off Road editor-in-chief Adam Wheeler wrote a piece on Jeffrey Herlings for The Telegraph in England. Check it out here.

When we gave Jeff Stanton's MXON Experience the Roger as the Racer X Party of the Year, we included a photo of the Stanton replica bike that showed up at the party, though mistakenly identified it as a Jeremy McGrath '93 replica. The owner, Troy Devlin, dropped us a note and a couple more photos of this beautiful bike that honors Stanton's last year as #1 in AMA Supercross/AMA 250 Motocross, which was 1993.

Remember the devastating Camp Fire that ripped through Paradise, California, last month? Several prominent vintage motorcycle collectors and enthusiasts lived there, including 81-year-old Paul Hunt of ISDT fame. Hunt lost two dozen rare old motorcycles, as well as his home and practically everything he had. Hunt told his story to Larry Lawrence for this Cycle News feature.