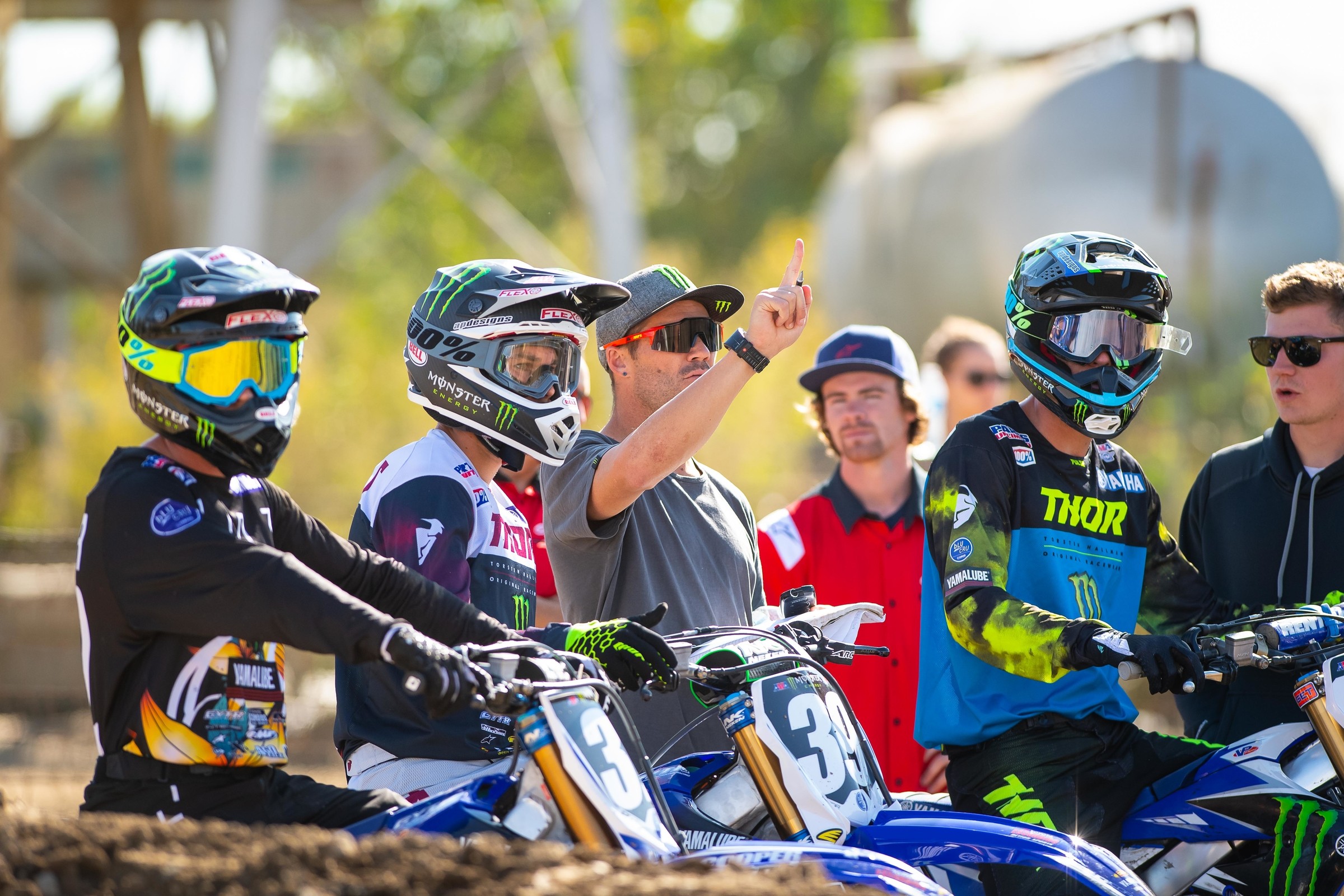 With just over a month remaining before the first gate drop of 2019, riders are hard at work preparing for the upcoming supercross season. But what are they doing? What kind of training is happening? How many laps are they doing? To find out we spoke with Gareth “Swanie” Swanepoel, trainer to the Monster Energy/Yamalube/Star Racing Yamaha squad, and more.

Racer X: When does boot camp start? Is there a specific date? And with the guys seemingly staying fit all year, do you even call it boot camp anymore?
Gareth Swanepoel: That depends. I’ve never really called it that, really. That is a term, although I’m not sure exactly where it came from. I know the [Aldon] Baker crew do it, they call it that, but in terms of what I do specifically, it just depends on the guy. Each guy is different.

After the last race I’ll give them two weeks off, then they’ll have two weeks of light training, just to kind of get back into it. That brings us to October and we get going again. We’ll start off working on a lot of off-the-bike fitness. If anyone has injuries or instabilities, anything nagging, we’ll work with that. And basically, from the beginning of November, that’s when we really, really get going.

What kind of off-the-bike stuff are you talking about? Do you have anything specific you prefer?
We spend most of our time on bicycles. A lot on road bikes and mountain bikes. I’ll throw in some running for the riders who can run, and we’ll do a lot of rowing too. Swimming is good for guys who are dealing with an injury, like a knee or something. But our main cardio thing is cycling.

Do you like swimming because it’s non-impactive or is there a different reason?
Mostly because there’s no impact, and breathing is always good too. The only thing that steers me away from swimming is, not everyone is good at swimming. If you have someone who struggles to swim it’s counterproductive. They’re just wasting time. They’re not getting a full workout because they’re just not good at swimming. It’s also hard to get data from heart rate monitors. Monitors work, but they don’t work as well in the water. You just don’t get as much data as you do with cycling and rowing.

You said you typically start going hard in November. What’s a typical November week for the guys?
We’ll ramp it up as the weeks go along, then we’ll back it down for recovery. A tough week would normally be Monday, Tuesday, Thursday, and Friday riding supercross. Every morning I have them do some kind of yoga with a bit of core exercise. I’ll have them row in the mornings. Then they’ll go to the track and ride. Obviously we’ll work on different programs sometimes. Sometimes it’s speed stuff, sometimes it’s skills, whatever. We always have something we’re working on at the track. I’ll have them do three days a week at the gym. Two days are full body, and we spend a specific day just on core training. On Wednesday and Saturday we’ll cycle.

You said at the end of the season the guys are getting two weeks off. That’s not a huge chunk, so are they having to work very hard to get that base back?
Exactly, no. I’d like to give the guys four weeks, but we’ve got stuff like the Monster Energy Cup, des Nations, that kind of thing. The off-season is really only three months, and supercross training starts really early. So to take more than two weeks off is really hard. That’s just the most I can really seem to fit in. Plus, two weeks is just enough to give the mind and body a rest, but it’s not long enough to really lose much. And the two weeks after that are pretty loose. Three to four days of cardio with a gym day thrown in. I try to give them some freedom instead of having a specific structure day in and day out. Then they’re normally back in California right after that and it’s go-time.

Mitchell Oldenburg missed a lot of 2018 due to injuries. Does he have a radically different program because of that?
He had a radically different program. While everyone else was racing he had an ACL reconstruction. That was a total program change for him. Two weeks after his ACL surgery he was in the pool. He had a flotation device, so he wasn’t kicking his legs, and we started with 20 minutes, three times a week, swimming. And of course he’s doing rehab too, trying to bend his knee to get full range of motion. From there we progressed to flat road cycling, then to full-blown swimming, cycling, mountain biking, and he even got some mountain bike races in. It’s quite funny—after his ACL reconstruction, four months later, he had a fitness test and his fitness had improved tremendously. It was by far his best, and one of the best tests I’ve seen. The guy had his ACL reconstructed and four months later he completely blew apart his fitness test.

How does that even happen? How is he performing at the highest level of his life after being down? How does that make sense?
Everything we do off the bike is to make you fitter and stronger on the motorcycle. If you do too much off the bike and then you try to ride, you’re tired. You’re not firing on all cylinders. Then when you’re having a good day on the dirt bike and firing on all cylinders, well then when you get in the gym or go to ride the bicycle, you’re tired. You had a really hard day at the supercross track or you rode two thirty-minute motos the day before. It’s really hard to balance. But if you take the dirt bike out of it, it becomes much easier to balance. You can have hard days, easy days, recovery days, whatever. You can have a systematic program and hit each mark as you go along. Your fitness improves tremendously, and I think that’s going to be a huge springboard for his [Oldenburg’s] season.

So having to ride the dirt bike and maintain skills, in a way, can be detrimental to your fitness? That’s something I never even thought of.
Yes, exactly. That’s the balance. A guy will go to the supercross track and push really hard, he’ll have a really good day with good intensity, but the next day, or that afternoon, a guy will go for a gnarly mountain bike ride. You can only maintain that for a couple weeks before you start getting tired. Then when you show up to ride you might start making a lot of mistakes. It can get counterproductive.

Motocross is a dangerous sport, so you’ve got to prioritize the riding over everything else. You have to balance when it’s good to push them off the bike, and when you need to let them recover. That’s the hardest thing to balance. If you go and do some gnarly strength training in the gym and wake up really sore and tired the next day, well, it’s not dangerous for to go jump on a bicycle and ride for a couple hours. But if they wake up really sore and tired and you try to get them to do fifty laps at one hundred percent effort on a supercross track, it starts becoming dangerous.

It can be hard to explain. I try my best, but it’s really in-depth and every rider is different. All the stuff we do, as far as working on so many things, on and off the bike, it’s really in-depth. There are so many elements you’re working with all the time.

It sounds really complicated. Being someone like yourself who knows a lot about this stuff, I can imagine it can be frustrating talking to people like me who don’t know much about it. For example, I don’t enjoy talking about dirt bikes to people who aren’t into dirt bikes.
[Laughs] No, it’s not like that. I just mean I could literally ramble for hours about all the different things we do. That’s why I enjoy my job so much. If a guy isn’t fit enough off the bike it’s a continuous thing trying to get his fitness up. If his core isn’t strong enough, we’re working on core strength. Maybe he’s got instability in his body due to an injury and we’re working on that. Plus, we’re trying to get them to ride a motorcycle as fast as possible. So then comes bike setup, testing, all of that. It’s a never-ending process, day in and day out, of trying to do things better and better.

I’d imagine with you being a former pro you’re able to understand that whole process pretty well.
Exactly, and that’s why I enjoy it so much. I’ve been there and I’ve done it. I still learn every day too. We all learn together and keep building. It’s fun, it’s a good job to have. We are always continuously trying to do things better.