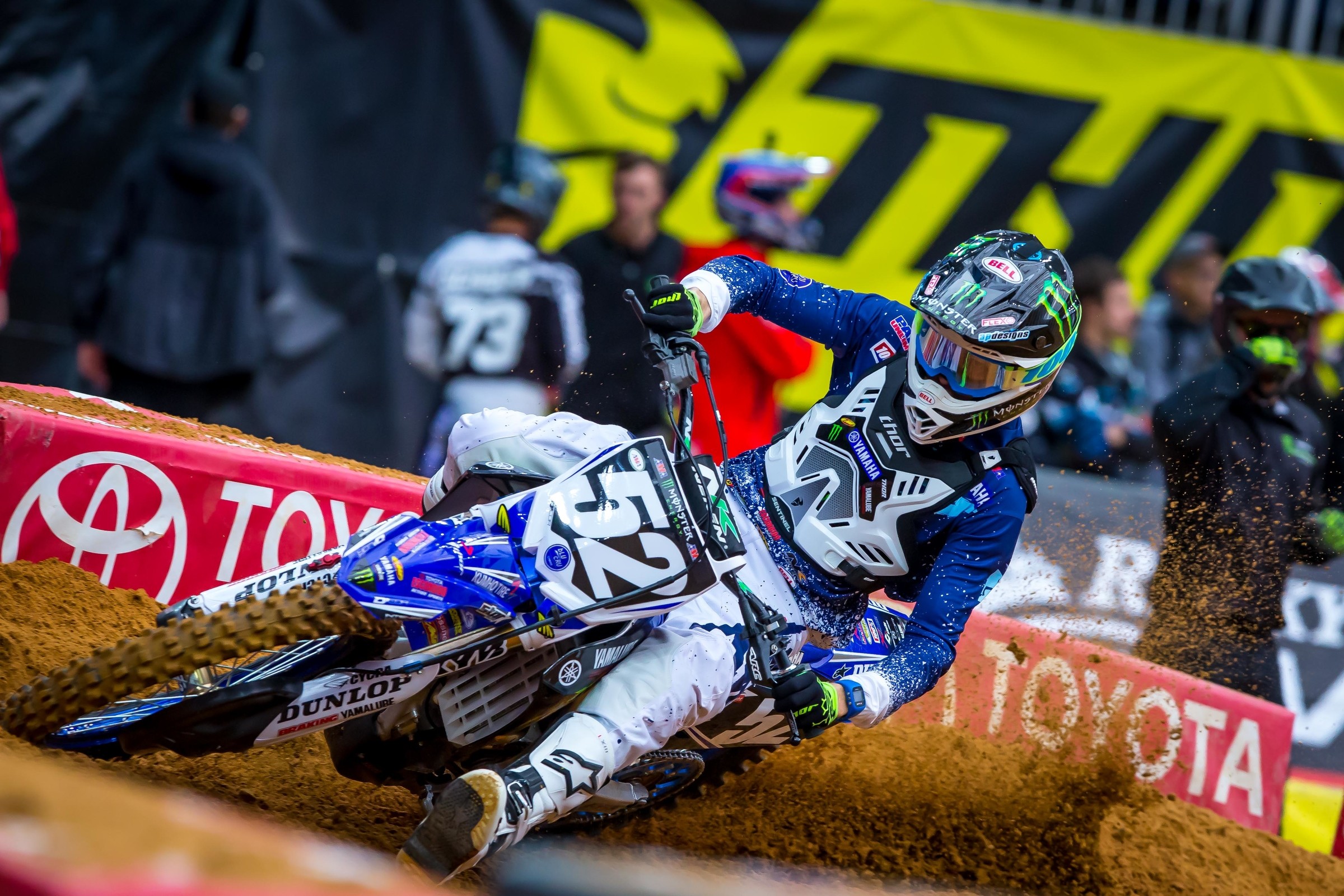 If you’re a Mitchell Oldenburg fan you didn’t get to do much cheering in 2018. The Monster Energy/Yamalube/Star Racing Yamaha rider spent most of the year on the sidelines, thanks to collarbone and knee injuries. That’s all in the past now though, and Oldenburg, who’s expecting a baby in April, is looking forward to getting back behind the gate in 2019. We caught up to him to see how the process is going.

Racer X: First, the important stuff. Are you having a boy or a girl?
Mitchell Oldenburg: A boy! We’re excited. It seems crazy! The due date is April 14.

Okay, due date is April 14. So the next question is, are you racing East or West?
They haven’t told us anything yet! It’s kind of hard though. Every year we get a game plan going then someone will get hurt and it’ll completely change everything. But April 13 is Denver, so it’s a West race.

So you’re hoping for East?
Well the week before that is Nashville, and I think that’s East, so it could go either way. I’ll be taking a redeye for sure!

Let’s recap your injuries just to refresh everyone’s memory.
I broke my collarbone in 2017 in San Diego, and kind of got some bad advice from some doctors, which set me back. I had a plate on my collarbone and it broke at the end of the plate so we moved the plate over. Then it broke at the beginning of the plate so we took the plate off and bone grafted it and tried to get it as strong as we could. Then last year in Phoenix I crashed during practice and broke it in two spots and didn’t even know it. It was weird. All the pain I had was in my arm. All the trauma I’ve had to that shoulder in the last couple years, I think I lost some feeling in my collarbone area. I tried racing Oakland because nothing was popping up that was wrong with my arm, then I found out my collarbone was broken in two spots. Now it’s plated end-to-end and I feel like we’re in a good spot with the shoulder. I came back and raced Seattle, and after that I was riding outdoors and only had a lap-and-a-half left in the day when I tipped over in a corner, stuck my leg out wrong, and blew my ACL and MCL out.

Why is it always at the very end of the day?
It was a big bummer. It was just a dumb crash too. I don’t think anyone saw it because it was in the back of the track, but if anyone would have seen it they would have been like, “Okay, get up, not that big of a deal.” That sucked. I literally just tipped over, it was no big deal at all.

Get the Latest From Racer X Brand

Well you’re back on the bike now. How’s the process going?
I got released to ride at the end of August, so I’ve been riding for about three months now. Everything has been going really well. It was kind of perfect timing. When I got released everyone was finishing up the season and they took a break when I was just getting back into it. That allowed me to kind of catch up a little bit for a month and go at my own pace. Since then I’ve just been plugging away. We kind of held off getting ready for supercross a little bit longer than normal. This time of year, we’re ready to go racing, but we still have five weeks until the first race. So we’re just ramping back up, getting into the swing of things, and I’m feeling really good. Just been working with Swannie [Gareth Swanepoel] and doing motos with Colt [Nichols], Justin Cooper, and AP [Aaron Plessinger]. Everything’s been going pretty good and I’m enjoying every second of it.

You missed a lot of racing, but you’re coming into 2019 with a ton of rest and prep. So are you at an advantage or disadvantage?
I think we’re in a good spot. I worked really hard this summer when I was hurt getting stronger in certain areas where I feel I needed it. I was up to 16 hours a week cycling, I did some mountain bike races, and I really kept busy doing that. Now it’s just gate time. I raced a couple local races at Glen Helen and I just need to get those feelings back. I think the nerves will be a bit more than normal at the first race, but we’re racers and this is what we get paid to do. It’s just one of those things. You have to deal with it and do the best you can because you can’t change anything at this point.

Obviously your team killed it in 2018. Was it tough for you having to be on the sidelines through all that?
It was a little tough, but I tried to just worry about myself and control what I could and not worry about what I couldn’t. But at the same time, I know what those guys do during the week because I do the exact same thing. So to see the success they had was nice. I’m on that same program. I do what Swannie tells me to do and every day I try to be better. Just being able to take a step back and hit the reset button allowed me to gain a new appreciation for the sport, and life in general.

Talk about your goals in 2019.
For me the main goal is just to stay healthy. Getting on the podium and winning races, I work hard enough to do it and I don’t think there’s anything more I could do physically. I think I do everything I can, and there’s no reason why I shouldn’t be in the mix with those guys for how hard I work. Everything in my life right now is going awesome. I joke around with my wife about it, that it’s kind of scary when everything is going so smoothly. It’s kind of like you’re just waiting for something to happen. I’m in a good place right now, and if I can stay healthy and do what I know how to do, I know I’ll be able to fight for wins and hopefully this championship.

Well, in terms of everything going smoothly, don’t worry, you’ll have plenty of sleepless nights starting in April.
I know. [Chuckles] With my son coming, it’s really exciting. It’s made me realize… Dirt bikes are important, but they aren’t my whole life anymore. I’m excited.