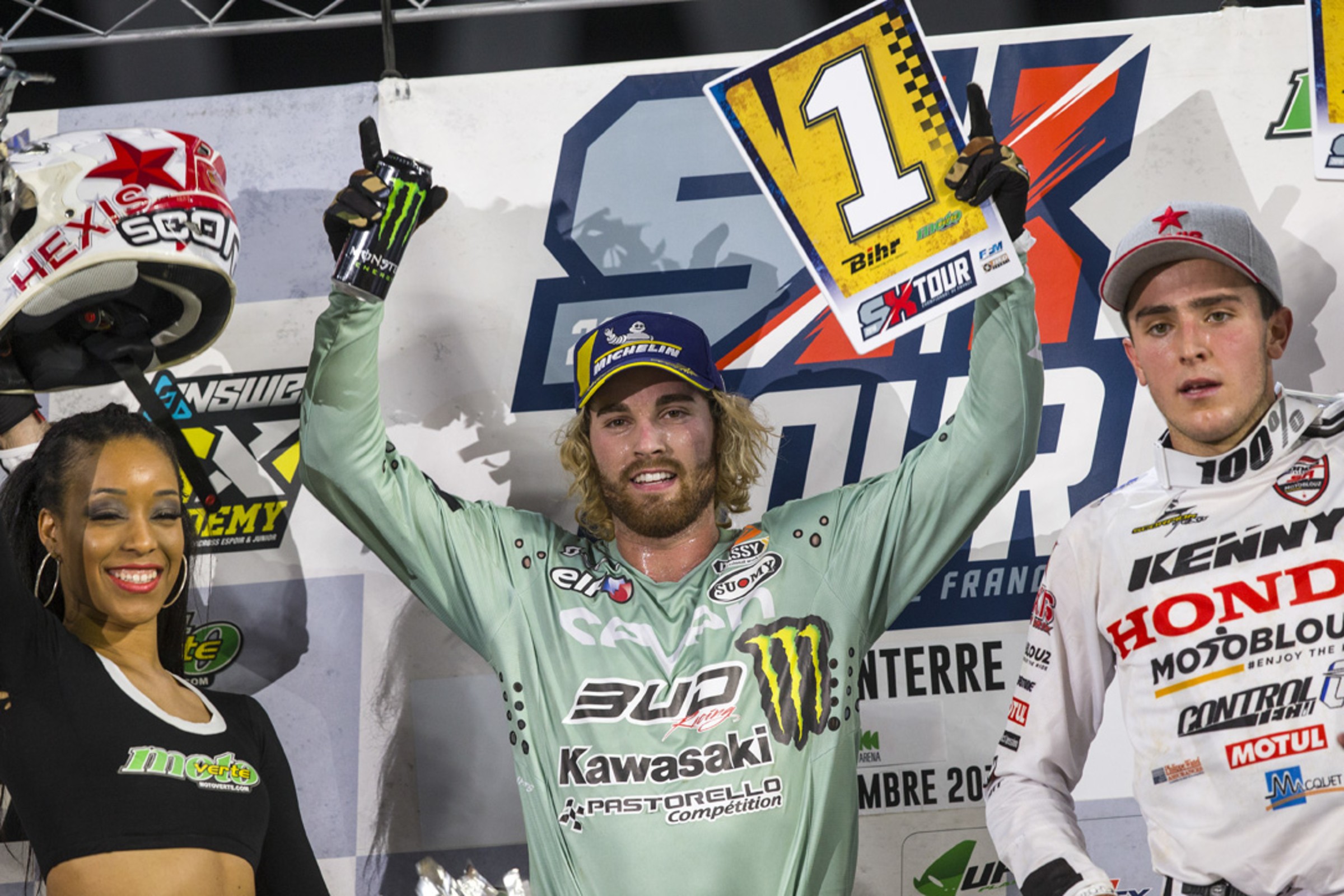 It was a very successful weekend at the Paris Supercross for Americans Jace Owen and Cameron McAdoo. Owen won three of the six main events (and finished second in the other three) and claimed Prince of Paris honors. McAdoo scored one main event win en route to second overall.

After the second day of racing on Sunday, Steve Matthes talked with both riders.

Racer X: Nice work. Three out of the six mains. Last main I thought you had it in the bag, but [Thomas] Do caught you. At the same time, nice weekend for you.
Jace Owen: Yeah, overall it’s been really good. I was over in Australia doing that series and actually the last month I got really sick over there. This was kind of planned to do and I debated on if I was going to be able to make it or not with all the traveling and stuff like that. Really I just wanted to get better. They’re like, we know you’re not feeling the best so however you do is fine with us. But obviously for me, I feel like I’ve got a point to prove still so I wanted to give it my all. Never rode the Kawasaki 250 ever, so that was my first time going out there.

It’s even more impressive then.
Yeah, to never ride a Kawi. Came, rode their suspension, their bike. The bike was good. Overall, it was really good. Yesterday [Saturday] I went 1-2-1 and then today [Sunday] I went 2-1-2, and like you said that last main definitely could have had it in the bag.

Were you thinking a little bit about the overall?
Yeah, honestly I was. Not going to lie—not feeling the best. It’s getting really hard for me to breathe out there. If I felt all good I would have continued on, but no excuses. The guys are riding great. He passed me and I let him by or whatever, but 2-1-2 for another overall and being the Prince of Paris, definitely stoked that I came and made the trip.

Your starts were on point all weekend.
Yeah, starts were good. That’s kind of one point that normally I’ve been pretty solid at, especially when I was in arenacross and winning a lot of races. So it’s kind of been the whole thing my whole career. Get up there with the guys, get out front and do your thing. Battling back there in the carnage makes it tough.

Waiting for the ginormous McAdoo/Owen battle at some point, but he wasn’t as good off the line as you.
Yeah. Like you said, he normally wasn’t getting off right away like that and I was able to get away. So he was riding good as well. Like you said, I think it would have been a pretty gnarly battle if we were together right away.

Slick out there, huh?
Yeah, it is really slick. Actually we’re running Michelin tires. Never ran them. Honestly, they were working pretty good. Got off to good starts. Kept it on two wheels the whole time. Can’t complain.

That’s cool because Michelin is a sponsor of the PulpMX Show, so I will now claim Jace Owen’s victory for them on Tuesday when we do the show.
There you go. Honestly, in the States you don’t really hear a whole lot about Michelin no more. It’s obviously Dunlop. Like I said, overall the tires were good. I was impressed.

Get the Latest From Racer x

Racer X: I just talked to Jace Owen. I told him that I was really looking forward to the McAdoo/Owen battles. Unfortunately, your starts were just not on the level of his. But certainly you had great speed.
Cameron McAdoo: Yeah. My starts honestly weren’t even close. I started probably outside the top ten every time. I honestly don’t have anything for it. Each time it was kind of something different, whether I’d spin or I’d have this wheelie. I can’t say just trying to figure out the bike, but it was tough. My starts were really good last weekend in AUS-X [Open]. I felt like I was coming off the metal awesome. This weekend some things were a little bit different, but I felt like I had great speed. I really wish I would have been able to start up front more because like last night I had one good start and we won that main.

I thought once the gate dropped your speed was very good. You could have won more than one main event, but I guess that’s the way it goes. Hard track to pass on too, right?
Yeah, it was. Actually in the last main I had a crash on lap two and I went back to I think 15th or 16th, so I had a lot of work to do. I got back up to I want to say fourth.

That last lap pass bumped you from third to second overall.
Yeah, exactly. I kind of knew that that was the deal. The guy wasn’t very happy on me passing him, but whatever.

Whoops were a strong point for you.
Yeah. Actually my whoops felt good all weekend. Press day I was kind of struggling with suspension, but we got it as good dialed as we could with the bike I have. I felt good all weekend, strong in the whoops and kind of really strong all over the track. Just my starts hindered me so bad.

You did Straight Rhythm for PulpMX. You did Australia. You won that. You came here to France. You’re quite the traveler this off-season.
Yeah. It’s been awesome. Every other off-season—well, I’ve only had one off-season, but last year in October I was pounding out 50, 60 laps a day. It was just so much training, training, training, and you go until February. So this has been cool. I’ve been basically on every end of the world now, which before this year I hadn’t left other than Canada and Mexico. So it’s been awesome to travel, see everything and get the racing experience. You really can’t beat that.