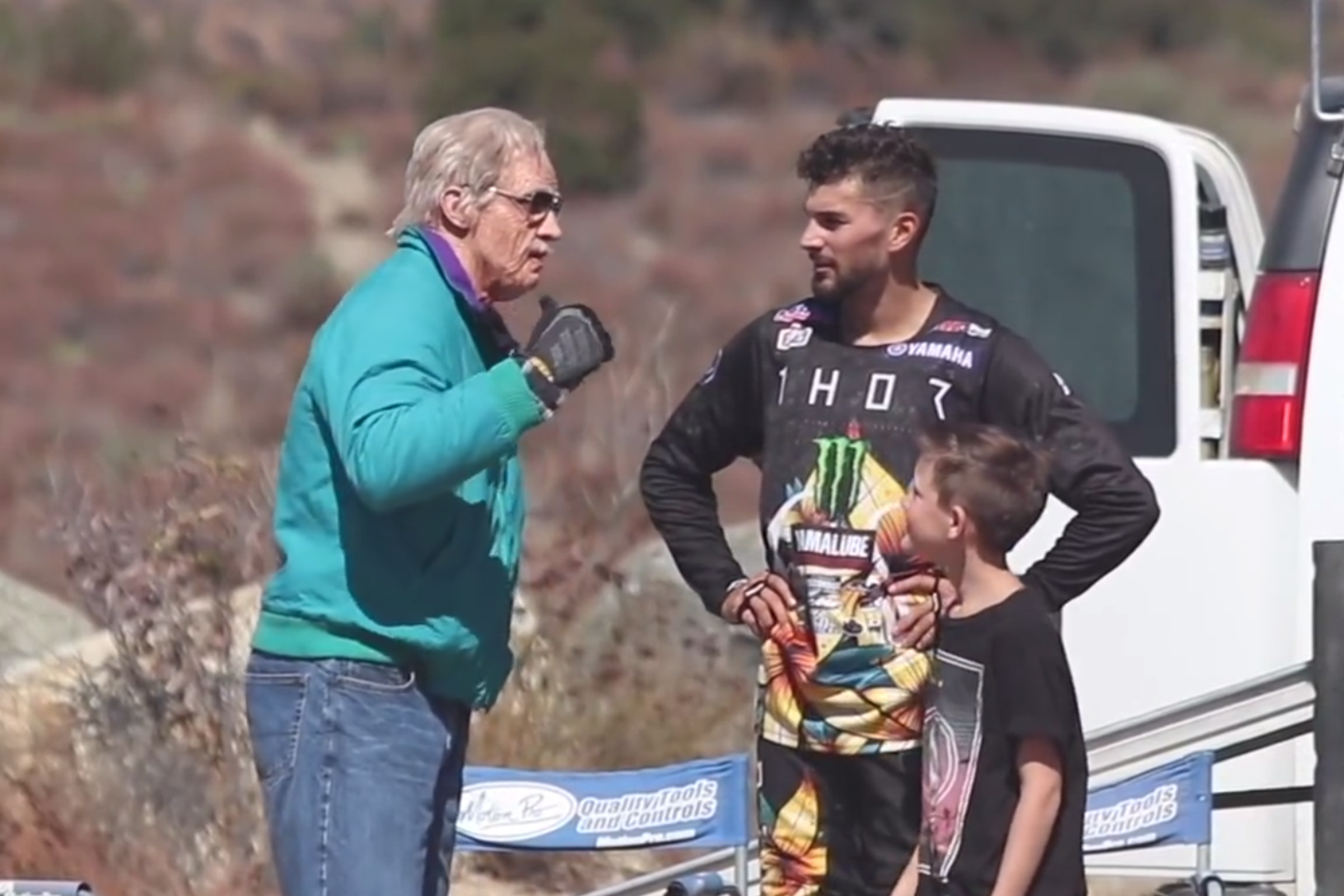 Most racers are wearing their game faces on race day, but when the pressure’s off most of them are pretty personable. That’s especially true of Dean Wilson, who always seems to find a way to crack people up. Need proof? Check out his hilarious Grandpa Earl YouTube video, in which he becomes an 80-year-old grandpa who can still shred on a dirt bike. After our sides stopped aching and we were able to pick ourselves up off the floor, we gave Earl a call to learn more about the making of this video.

Racer X: Grandpa Earl. What gave you that idea?
Dean Wilson: It was actually my idea, but we obviously kind of got the idea from Bad Grandpa. My friend Chris, who filmed it, and I wanted to do this a couple years ago, but having the time is really hard. You’re always busy doing stuff. That was only like my third day back on the bike and I just wanted to get it over and done with. But I wanted to do it because I thought it’d be really funny. It was more just for a good laugh. It seemed to turn out pretty good and a lot of people seemed to think it was funny. If I can make somebody laugh I think I’ve done my job.

Your job as a what? A brand representative, comedian, or just as Dean Wilson?
I don’t know. If I can make someone crack a smile I think you’re having a good day. People who watched it, I think most of them thought it was funny. And if they didn’t think it was funny, at least I gave them some entertainment [laughs].

How long did it take to put on all that makeup?
It took like four-and-a-half hours. They met me at the house and we started at 5:30 in the morning. The guy who did it also did another prank video at Muscle Beach and he got like eight million views. The reason I knew that makeup artist was through my friend Chris, who works in the stunt industry. He works with that guy and he connected us. It was all just for fun, but to be honest it was a lot harder than it looked. Obviously I’ve got a funny accent, and having to talk in a grandpa voice was really hard. You can tell in the video it’s me sometimes because I go in and out of voices. Acting is not my thing—it was way harder than it looked. Also, I was pretty much messing with people I’m friends with. Pretty much everyone I pranked I knew. My body language, my features, and stuff like that all make it a lot harder when you are friends with the people you’re pranking. If you were just doing it to random people it’d be a lot easier. It was definitely tricky. That’s why I brought my “grandson,” to help with the disguise a little bit.

So was anyone in on the joke, or did they really not know it was you?
No, they weren’t in on it. When I went up to them they didn’t know it was me, but I think they were suspicious. When I asked Colt [Nichols] to do a lap with me he looked at me and we locked eyes and I felt so uncomfortable. It was really hard to do. He didn’t know at all, but obviously by the end everyone knew it was me because we were all laughing about it. It was pretty funny.

What did Colt Nichols say when you told him you were going to kick his ass?
He didn’t really know what to think!

All joking aside, what’s the motivation for some of the funny content you create and post? Is that just who you are or are there additional reasons?
I just want to get the YouTube going a little bit. For one, it’s good publicity for yourself, and sponsors like someone who can market their brand. But really I was just trying to build my YouTube channel up. I like creating cool content people are going to watch. It’s a little bit easier right now because it’s the off-season and I’ve got a little bit of time—when I’m racing I won’t have as much time and it’ll be different. I just kind of wanted to have fun posting videos while marketing myself and maintaining value.