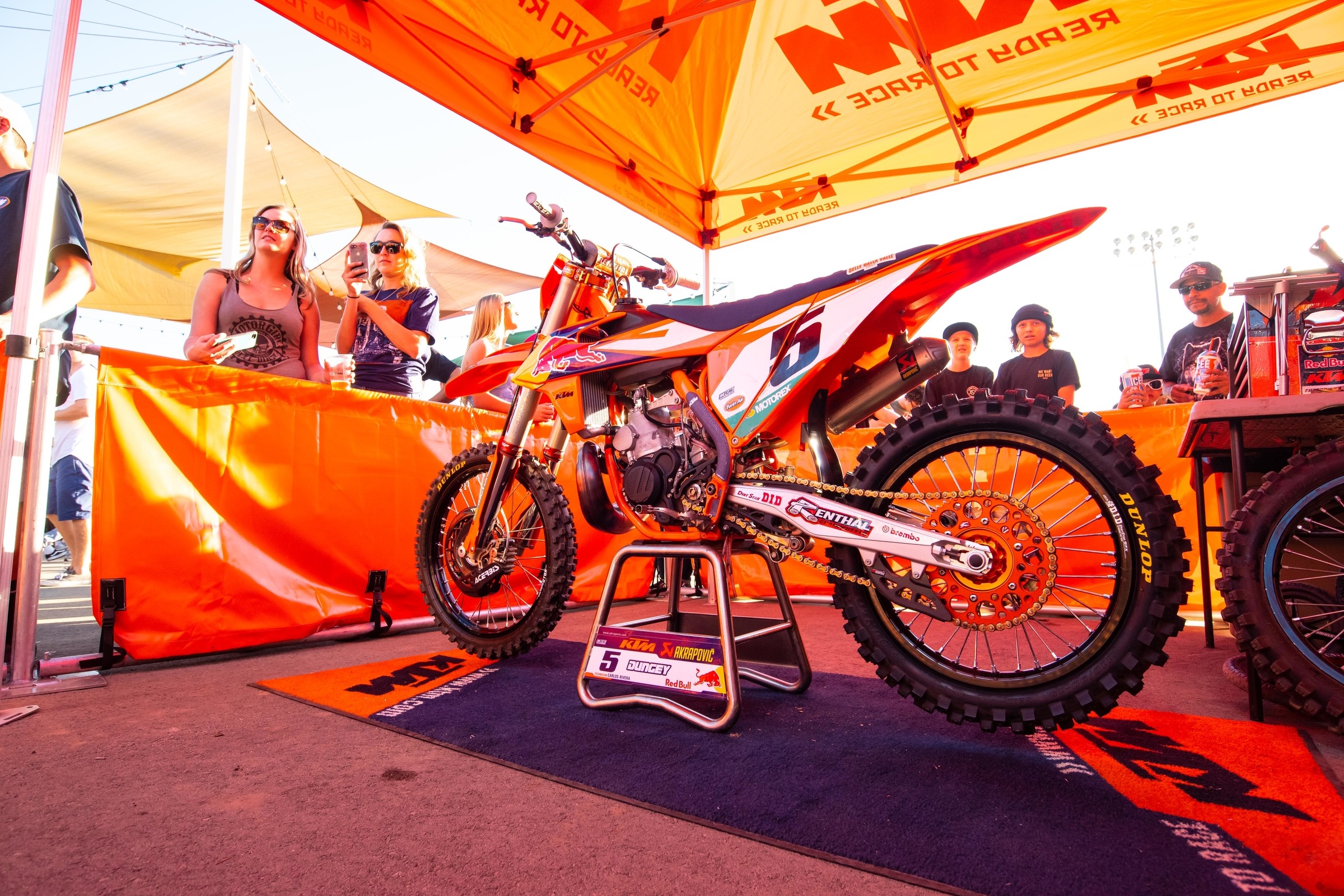 Red Bull Straight Rhythm blasted into the past with a “The ‘90s were more fun” theme and a two-stroke only rulebook, and even some retro riders with the likes of Ryan Dungey and Ryan Villopoto in the field.

That generated some hype, but what about reality? Well, that turned out pretty good. Here are five things we learned from the fifth-edition of RBSR.

1. The Bikes Were the Stars

By its second edition in 2016, Red Bull Straight Rhythm packed the star power of Ryan Dungey, James Stewart, and Ken Roczen, and the event seemed on its way. It went wayward, though, with last year’s event featuring just Marvin Musquin as a 450 podium regular. During Friday practice last year, Red Bull’s Jeremy Malott, who came up with the Straight Rhythm concept, told me the event would not return for 2018.

But first, a two-stroke class was schedule to run, and it didn’t just steal the show, it saved it. Ronnie Mac and Stank Dog represented a most unholy hail mary, but it worked better than imagined, and the numbers and buzz grew so much that it became impossible to not bring the event back again. Yes, Ronnie Mac and Gared “Stank Dog” Steinke did what the factory regulars could not.

For 2018, four-strokes got the heave ho, and the two-stroke bikes became such stars that the regular hook of the event—a supercross track without turns—became the second-wildest concept. The bikes were the stars. You had the amazing sounds and smells of two-strokes, some amazing retro bike builds, and superb racing. The good ole days weren’t always good, but on this night they sure seemed great.

2. The Finishes were closer than Ever

Hard to believe 45 second races could become snoozers, but that was the case far too often in the four-stroke iteration of RBSR. My oh my was that not the case this year. Several runs were decided by only hundredths of a second, and with a section of whoops before the finish, the distinctive wha-wha-wha-wha of two two-strokes in wide-open dash for the win absolutely electrified the place. The best battle was probably the third race between old rivals Josh Grant and Ryan Villopoto, who stood 1-1 and came into the deciding whoop section dead even. The both went full-send, and Villopoto won by the smallest of margins. Also, the finals between Ryan Dungey and Shane McElrath were intense, with each winning a run and taking it to a third race.

Do two-strokes create closer racing? They did on this night.

Two-strokes are easy to rebuild, and catastrophic engine problems are easier to fix, but for riders and mechanics spoiled by EFI, a return to jetting was a shock to the system. Through the weekend, the term “getting the bike to run right” was thrown around a lot. Some never got it, such as Christophe Pourcel, whose 250 let go completely in his run against Ryan Villopoto. Ryan Dungey’s factory KTM 250 SX required a trip back to the shop on Friday night, and his crew was working at midnight to finally get a problem diagnosed. And for everyone, even getting a bike to bark during afternoon practice and qualifying didn’t guarantee perfect performance at night.

Get the Latest Racer X

Sign up for our newsletters and never miss the updates you love.

Stank Dog and Ronnie Mac proved themselves as more than just distinct personalities by making it to the finals of last year’s two-stroke class. They took a back seat this time. Mac claimed he didn’t know he had to qualify in order to actually race—although in reality he was struggling big time with an ankle injury dating back to a Nitro Circus crash a few months ago. He didn’t race. Stank was entered in both the 150 and 250 classes, but was down on speed this time compared to the leaders. He then crashed in his first 250 run off and was out for the night with injury.

This time, the big names got their revenge.

Ryan Dungey hadn’t raced anything since announcing his professional retirement last May. Ryan Villopoto has been racing a little of everything since declaring himself the “best retired rider ever” but he did get beat straight-up by Stank Dog last year. Both Ryans came out firing this time. Dungey’s 250 SX was ripping and he was fastest in qualifying. After Villopoto barely, barely, barely eliminated Josh Grant, a classic matchup of The Ryans loomed, and they battled hard with Dungey just getting the edge (have we mentioned how fast his factory two-stroke looked and sounded?).

Dungey and RV were great, but the two current factory riders in the field, Troy Lee Designs/Red Bull KTM’s Shane McElrath and Jordon Smith, were up to the challenge. McElrath and Dungey were an even match in the finals, but McElrath edged ahead to secure the win and score one for the current racer set. Villopoto edged Smith in the trophy run off to net third overall.

The Ryans came and saw, they put on a show and generated some cheers. McElrath, who won the 250F class at this event the last two years, was a small notch better though. Score one for the current racers, and also, consider this the only race win in modern times for a two-stroke factory rider. Isn’t that the coolest part of all?