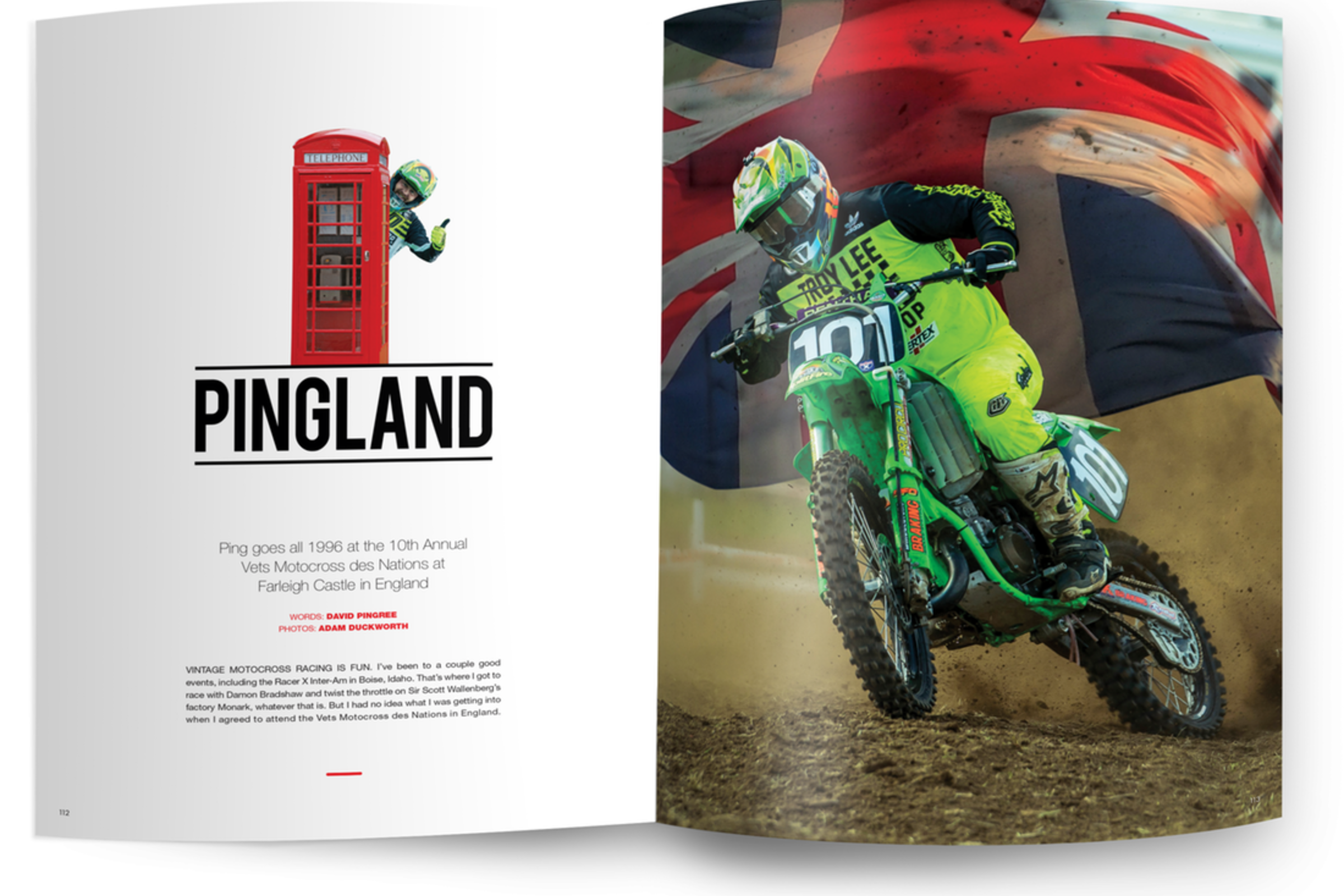 Pick up your copy now and read features about the Masters (50+) Class at Loretta Lynn's and Canada's new supercross series returning to Montreal, plus check out a preview of Roddy MacLeod’s new book, Will to Victory. Also read about our return to New England for the 2nd Annual Racer X Maine Event, and much more in the December 2018 Issue of Racer X Illustrated.

In this month’s issue of Racer X Illustrated you’ll find a feature story (Pingland, page 112) about my trip to the Vets Motocross des Nations in England. I had seen pictures and video from this event and it always seemed like a cool meeting of riders who focused on having a good time. So, naturally, I wanted to check it out. I probably should have done a little more research because I kept getting caught off guard at the race. The guys that run the @90motocross Instagram page built me a 1996 Pro Circuit/ Splitfire Kawasaki KX125 replica that was beautiful. I assumed I would be racing against other 125s, but that wasn’t accurate. The Super Evo class is for bikes from 1989 to 1996; it’s open to all sizes of bikes. That explained all the 500s lined up next to me, including recent retiree Billy MacKenzie. Starts were slightly discouraging and, as you can see in the start photo, I had to load up on tear-offs and duck the roost.

One of the cool things I picked up over the weekend was that this venue was a 500cc GP round for years and years before the death of that class. And during that time, guess which rider was known for his dominating performances at Farleigh Castle? The original American bad ass himself, “Bad” Brad Lackey. For me, any trip to Europe is steeped in history and hearing the stories from locals about Lackey putting the screws to the world’s best GP riders was as cool as nearby Stonehenge, which we also visited while in the area.

I used the trip as an opportunity to show my daughters around London and Paris. We spent two days seeing the sights in London before the race and then caught the Eurostar train through the “Chunnel” into Paris for a couple days. I could never get into history classes in school because it all seemed so fictional. However, the first trip I took to Europe when I was 17 changed all that. When you can see structures and monuments that were built thousands of years ago, and touch them with your own hands, history becomes very real, very tangible, and much more interesting. I hoped that this whirlwind trip through a couple of historically significant cities would stick with them as those topics begin to come up.

We got lucky with the weather this year. In the ten years they’ve been running this event they’ve had rain seven times. We spent most of the weekend under sunny skies with just some light clouds on Sunday. I can’t say enough good things about the event and the people in the UK. Maybe it was because we were all there sharing our love of the “glory years” of motocross, but I had an amazing time and folks couldn’t have been more inviting. Read the full story starting on page 112 in the December issue of Racer X Illustrated.