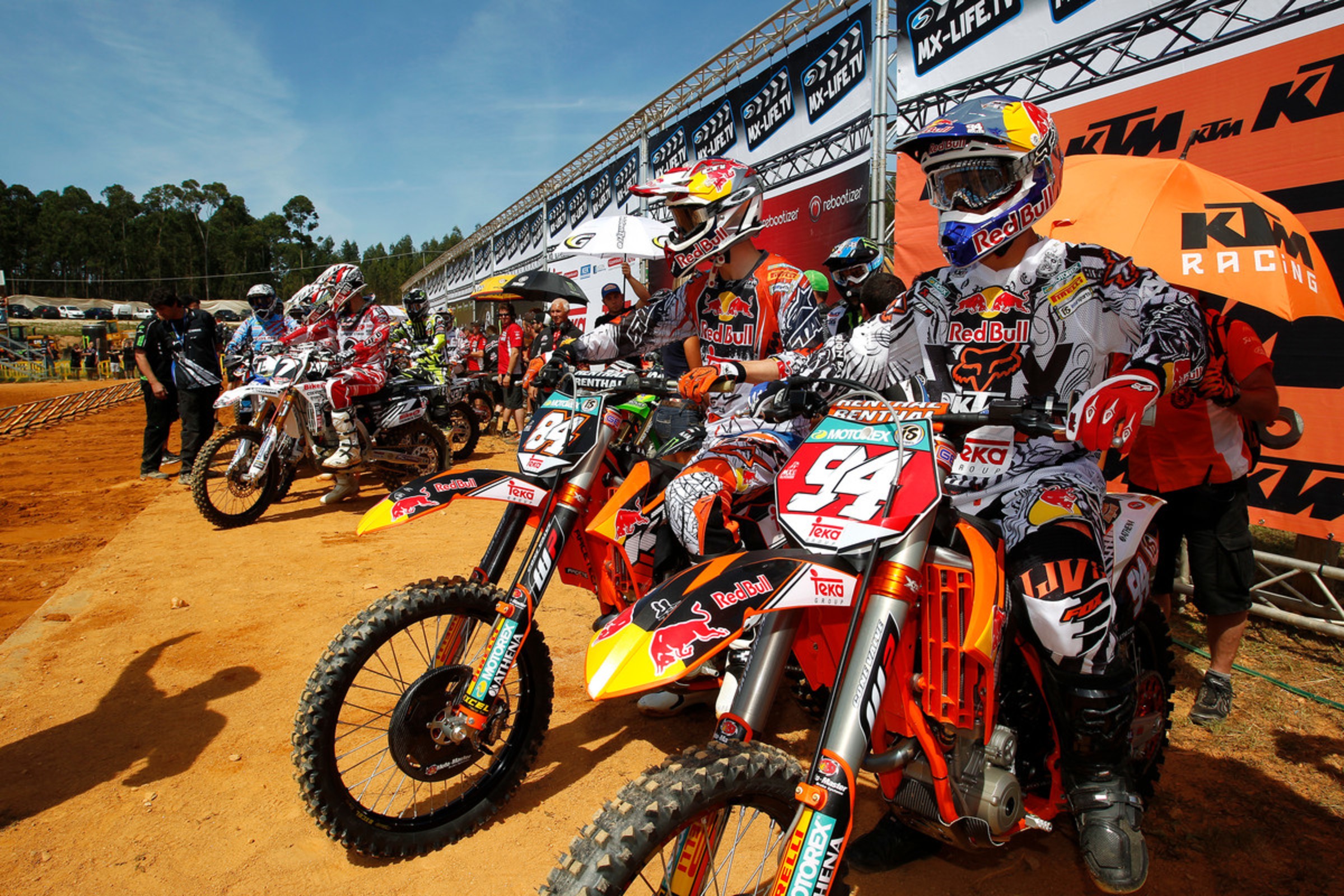 Oh, yes, Tomac versus Herlings has the right pieces. Eli has won the last two AMA 450 Motocross Championships, and Herlings has risen to MXGP champion this season by virtue of domination. Plus, this battle has the law of supply and demand surrounding it, as spars between the two have been limited to Herlings incredible one-off U.S. AMA National appearance last year at Ironman, and Tomac splitting motos with him a week later at the USGP at WW Ranch. These two have barely raced each other, and absence makes the heart grow fonder.

To focus only on Tomac and Herlings, though, ignores a duel that was at once much more personal than anything we see today. Herlings and Ken Roczen are just six months apart in age, and both exploded onto the Grand Prix scene around the same time, both fast enough to do serious damage as 15-year-olds (they just had to sharpen their race craft against the experienced Marvin Musquin, which makes it an even bigger shame Marvin wasn’t selected to the French Nations team this year. A fresh Musquin/Herlings/Roczen tussle would surely stoke memories for anyone following the GP tour back in those days, but alas, Marvin isn’t on the bill).

The 2011 MX2 battle between the young German and the young Dutchman, which included them both riding for the same team, threatened to boil over into a rivalry bigger, deeper, and perhaps even faster than any dynamic duo duel that had come before. But Roczen moved to the U.S. and Herlings chose to stay home. They haven’t raced since the final race of the 2011 Grand Prix season, on September 11, 2011. Never in the same class at the Nations, not at a USGP, not an AMA National, not a big one-off international event, nothing. It’s been seven whole years now since Roczen and Herlings have lined up on the same starting gate.

But how good was that 2011 season? We asked our Grand Prix scribe Adam Wheeler for his thoughts:

Both riders came into Red Bull KTM on different terms. Herlings had already been snared, baptized at the 2009 Motocross of Nations, and was firmly on the KTM radar. The 2010 season served as his debut year, and he announced himself as a major talent in the sand and a ridiculously fast, but rough, diamond with an unpredictable streak (win or crash, and with a big mouth to boot). He appeared on the podium in his second Grand Prix and won his third. For 2011, he was undoubtedly a rider who would figure for the championship—if not a direct bid, then someone who would muddle the formbook.

Roczen, meanwhile, had made his impact in 2009. He had to wait until his 15th birthday to make his GP debut in Portugal five rounds into the championship. He also made a first appearance in the top three (moto) in his second outing and claimed his home Grand Prix three rounds later. Although he missed a third of the season, Roczen’s freaky consistency meant he classified fifth in the 2009 standings.

In 2010, Roczen wore an expression of frustration with the lagging development of Suzuki’s RM-Z250 that let him down both in Catalunya and Holland, and it was part of the reason he lost the title duel with Marvin Musquin.

In 2011, Musquin, at 21 and a back-to-back title winner, had already made the move to the USA. Herlings was on a rapid upward streak and fully recovered from a dislocated shoulder that ended 2010 early. Roczen had been freshly poached from Suzuki in a set of circumstances where a major sponsor—Teka—also departed yellow for Austrian orange. Suzuki were decimated at the end of 2010, with Arnaud Tonus also leaving for Steve Dixon’s Bike It Yamaha crew. With Roczen and Herlings together, Red Bull KTM boasted a line-up of talent unseen in MXGP for quite some time.

Roczen’s ripening profile, looks, nationality, and potential was of particular interest to KTM, while Herlings, less mature at this stage, was taking baby steps on the bumpy road of coping with fame and acclaim. Stefan Everts was in control of the kindergarten and the fleet of rapid 250 SX-Fs.

The season started with the exchanges of thrusts and parries. Roczen was the king of the qualification heat wins (nine from the first ten rounds) and took the opening fixture in Bulgaria while Herlings won at Valkenswaard for round two—part of seven consecutive victories for Herlings at that track. Roczen then took the USA; Herlings retaliated by owning Brazil.

Herlings won again in Portugal as Tommy Searle (who would fill the Roczen void as Herlings’ nemesis so memorably in 2012) also chipped in. Roczen had crashes that marred results in Portugal and France, but stitched four consecutive triumphs together in the mid-part of the season while Herlings managed just two runner-up positions to the German in that time. Roczen pulled away, setting up a memorable title celebration on native turf at Gaildorf.

Tension increased in the Red Bull KTM team, but the factory could count on the progress of Tony Cairoli and his vanquishing of the MXGP class on the 350 SX-F as a welcome distraction. Roczen versus Herlings in MX2 had more gravitas and angst surrounding it than any of the disputes seen within the squad in 2018. These were two ambitious and occasionally ruthless youngsters not prepared to budge: Roczen—with half a campaign more experience—determined to leave Grand Prix with his prize, and Herlings seemingly relishing his role as the rabid underdog.

At times, there was little to separate them in terms of speed and on the results sheet, but there was definitely a feeling in 2011 that this was Roczen’s year and Herlings was continuing his education. It would have been quite an upset if the Dutchman had actually managed to supersede #94. Herlings’ words and comments since have revealed that he looked up to Roczen immensely that term. Plus, their battle was a good rehearsal and served as training for the tussle with Searle in 2012 that was more physical and ill-tempered, if somewhat easier in that the Englishman was on the other side of the paddock in the Monster Energy CLS Kawasaki setup.

Herlings lent heavily on the KTM crew during 2011-2012, with some off-track incidents marring his indisputable class on the motorcycle. In a way, it was the foundations of a strong bond between the factory and the rider that further intensified as they both alternated between title success and crushing injury disappointment. It cemented his role as an MXGP rider at a time when he also had his head turned by the prospect of supercross. Herlings really “discovered” his home and team, and the same people remain in place today.

Herlings rode in the MX Open class at the 2011 Motocross of Nations (Roczen in MX2). They both won their respective categories in 2012 at Lommel. They haven’t raced against each other since. Roczen’s injury problems are well-known. Herlings has also been through the mill (three collarbone breaks, dislocated hip, and snapped femur among the “highlights”), but his ascension in MXGP this year would indicate he is in a different sphere of performance to Roczen. As Kenny continues to rebuild from those devastating arm injuries—showing great form, but not yet grabbing a full-on overall win yet—it might not be a fair contest on current form at RedBud. Herlings is at a peak; Roczen is still working his way back. However, the reunion of these two old foes and the original teen wonders of Grand Prix (along with Searle and of which Jorge Prado is next in line) will be one of the special moments to witness in Michigan.