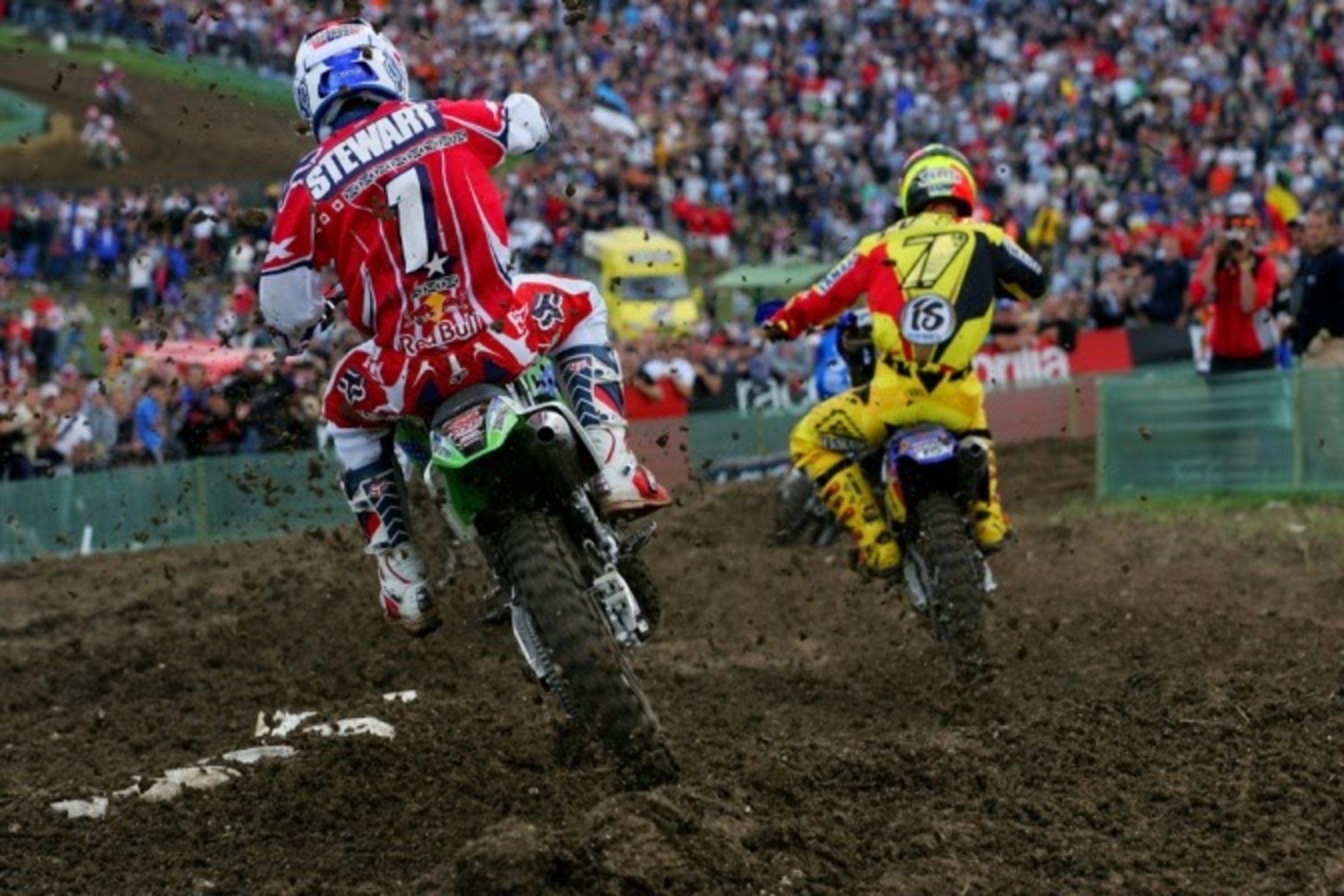 On This Day in Moto September 24

At the 2006 FIM Motocross of Nations at Matterley Basin, England, several overlapping storylines all came into play at once. Team USA ended up winning, even without it's injured captain, but yet the victory of the day seemed to belong to a pair of European riders, one in his last race as a professional, the other just beginning his ascent to the top. Needless to say, it was an exceptional race.

It all began to play out two weeks earlier at the final AMA Pro Motocross National of 2006 at Glen Helen. That's where Ricky Carmichael was dicing for the lead with James Stewart and crashed hard, dislocating his shoulder. It was the one and only outdoor DNF of Carmichael's career due to an injury, and after a week it was apparent he was a no-go for the MXoN in England. Because it was so late in the game and bikes had already been shipped across the Atlanta, Team USA boss Roger DeCoster decided to send RC's Makita Suzuki teammate Ivan Tedesco instead, despite the fact that Tedesco had also been hurt and had ridden just one outdoor race that season, a ninth at Broome-Tioga. Roger was hoping Tedesco could just get a decent moto in as the MX3 rider, having moved Team USA debutante Stewart to MX1 and rookie sensation Ryan Villopoto as the MX2 rider.

At the race Tedesco did just that, finishing sixth in the first MX2/MX3 moto, and then ninth in the final MX1/MX3 race. Villopoto was a revelation finishing 3-2 in his two motos for the overall win in MX2 in his Team USA debut. But he lost a shot at history when it was Antonio Cairoli of Italy who won the second moto outright, topping RV and all of the rest of the MX2 and MX3 riders to become the first 250F rider to ever win a MXoN moto outright.

And then there was Stefan Everts, the biggest winner of all that day. In two incredible performances Everts managed to overtake Stewart at the front and ride away with the victories. It was the ultimate walk-off win in motocross history, a 1-1 sweep at the MXoN and a chance to beat the man that was pegged as Carmichael's heir-apparent as America's best racer. Later that night, while the Americans were celebrating their team win, Everts walked into the Alpinestars hospitality center that was serving as the site of Team USA's victory parade and was given an impromptu standing ovation on a job incredibly well-done.

The opening round of the 1972 Trans-AMA Series goes off at Copetown in Ontario, Canada, and Suzuki's Roger DeCoster is the winner. DeCoster went 1-1 with Sweden's Ake Jonsson 2-2 on his Maico and Husqvarna's Heikki Mikkola 3-3. The top American was fourth-place Brad Lackey, fourth in both motos aboard his Kawasaki.  DeCoster was on the first really hit streak of his epic career, having won the overall at both the recent Trophee (250cc) and Motocross (500cc) des Nations races, though he did not win every moto like Danny "Magoo" Chandler would a decade later.

To no one's surprise Bob "Hurricane" Hannah wins the opening round of the 1978 Trans-AMA Series at Mid-Ohio aboard his works 425cc OW39 Yamaha, but the runner-up is a big surprise: Maico's semi-privateer Denny Swartz, an Ohio native. Hannah was a dominant force in '78, and likely a big part of the reason why the field of Europeans that used to follow the series had dwindled down to just two riders, Belgium's Roger DeCoster and Honda's Graham Noyce. Swartz led much of the second moto, urged on by his friends and fans, and he ended up with 7-2 moto scores that were good for second overall. Team Honda's Marty Smith was third with 5-4 scores while DeCoster ran 3-8 for fourth.

And today is the birthday of Mitch Payton, the founder and owner of Pro Circuit, as well as the vaunted Monster Energy/Pro Circuit Kawasaki team. Established in 1991, Payton's team has had a hand in the careers of some of the most successful riders ever, including Jeremy McGrath, Ricky Carmichael, Ryan Villopoto, Steve Lamson, Ivan Tedesco, Grant Langston, and many, many more. He's already a member of the AMA Motorcycle Hall of Fame.