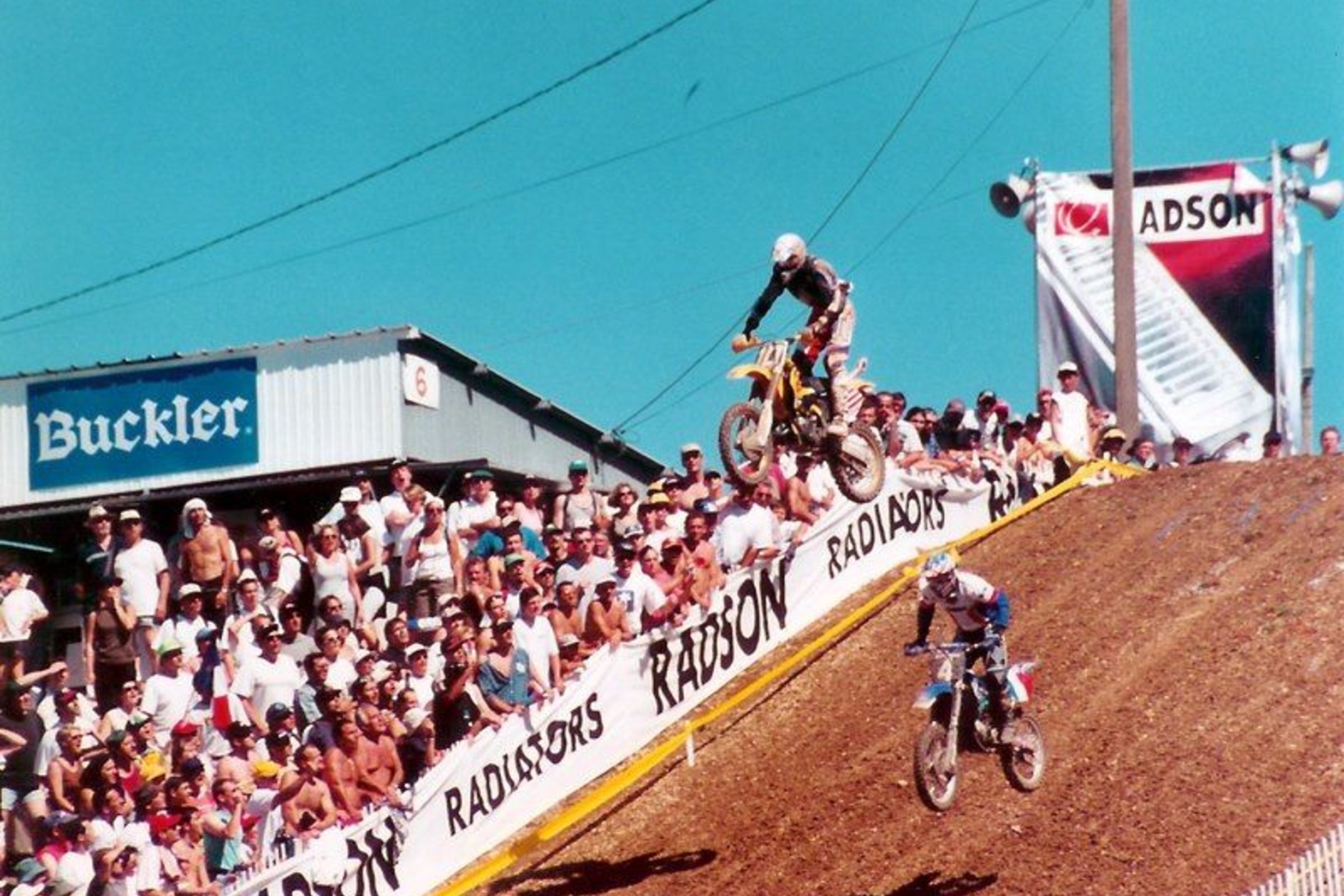 On This Day in Moto September 10

Ricky Carmichael had the worst race of his entire career at Glen Helen, which hosted the last round of the 2006 AMA/Toyota Pro Motocross Championship. The Makita Suzuki rider had already wrapped up the championship title—his tenth in a row in outdoor motocross, as well as his last, as he was set to retire from full-time racing the following year. But at Glen Helen, the GOAT crashed while dicing for the lead with Kawasaki's James Stewart and ended up DNF'ing both motos for the one and only time in his AMA Motocross career. James Stewart ended up the winner with 1-1 scores, followed by four Honda riders: Davi Millsaps, Travis Preston, Kevin Windham, and Nick Wey. The shoulder injury RC suffered also knocked him out of the 2006 Motocross of Nations, which was being billed as the last battle between him and Europe's all-time best, Stefan Everts.

At the Trophee des Nations in Kester, Belgium, the home team won the event for the tenth year in a row,as multi-time world champions Roger DeCoster, Harry Everts, and Gaston Rahier were joined by the very talented Jaak Van Velthoven to better Sweden, Great Britain, and Czechoslovakia. The United States team—Bob Hannah, Tommy Croft, Rex Staten, and Chuck Sun—would only muster a fifth-place finish. Hannah had the best day on his Yamaha YZ250, going 3-19. Hannah was leading the second moto before crashing on the first lap. The motos were won by Harry Everts on a Bultaco and Sweden's Hakan Carlqvist on a Husqvarna.

Two rookies to Team USA—Honda's Jeff Stanton and Mike Kiedrowski—and the veteran Jeff Ward of Team Kawasaki worked together to notch the ninth straight Motocross des Nations win for the Americans. Stanton led the way by sweeping both 250 motos while Kiedrowski won a 125 moto and Ward a 500 moto. With only four of six motos counting towards the overall, that was a perfect score of four points. Second was Italy, which was responsible for the other two moto wins... sort of. Alessandro Puzar won the second 125 moto from Kiedrowski, but U.S. ex-pat Trampas Parker, a native of Louisiana but living and racing in Italy, rode for his adopted country and won the last 500 moto from Jeff Ward. Parker, riding for KTM, was the 1989 FIM 125cc Motocross World Champion.

On a wild day in Slovakia, Team USA came up one point short of getting the Peter Chamberlain Trophy back. Jeff Emig was the outright 250 and overall winner with 2-1 scores and Ryan Hughes went 2-2 on the KX500, but 125cc AMA National Champion Steve Lamson had an off day, losing the 125 Class to the practically unknown 17-year-old Frenchman Sebastien Tortelli, who not only beat Lamson but also 250cc Motocross World Champion Stefan Everts. The whole race came down to a last-moto four-way battle between Emig, Belgium's Joel Smets, Great Britain's Kurt Nicoll, and Hughes. Emig, riding a Yamaha YZ250, slowed down out front to bunch the pack up and give Hughes a shot at reeling in Smets, but Nicoll got squirrelly going up a steep hill, Hughes ran into the back of him, and that was that. Belgium won for the first time since 1980.

The Motocross des Nations took place in St. Jean D'Angely, France, and Team USA's Ricky Carmichael used the occasion to show the world that he was soon to be the fastest man on the planet by winning the 250 class aboard his Kawasaki and leading Team USA to its first win in four years. Carmichael, a four-time AMA champion at this point (three 125, one 250), would actually split moto wins with Sebastien Tortelli, the former two-time FIM Motocross World Champion now chasing him around the States.

That second moto was also the last moto Carmichael would ever lose at the Motocross des Nations. He was supported by Honda-backed journeyman Ryan Hughes, who wins the first 500 moto when Britain's James Dobb stalls while leading in the last corner, and wild child Travis Pastrana, who duels with both Stephane Roncada of France and Grant Langston of South Africa in the 125 class. Pastrana would end up with 10-15 scores in the combined results, with Hughes 1-5 for third overall in the individual overall tally.