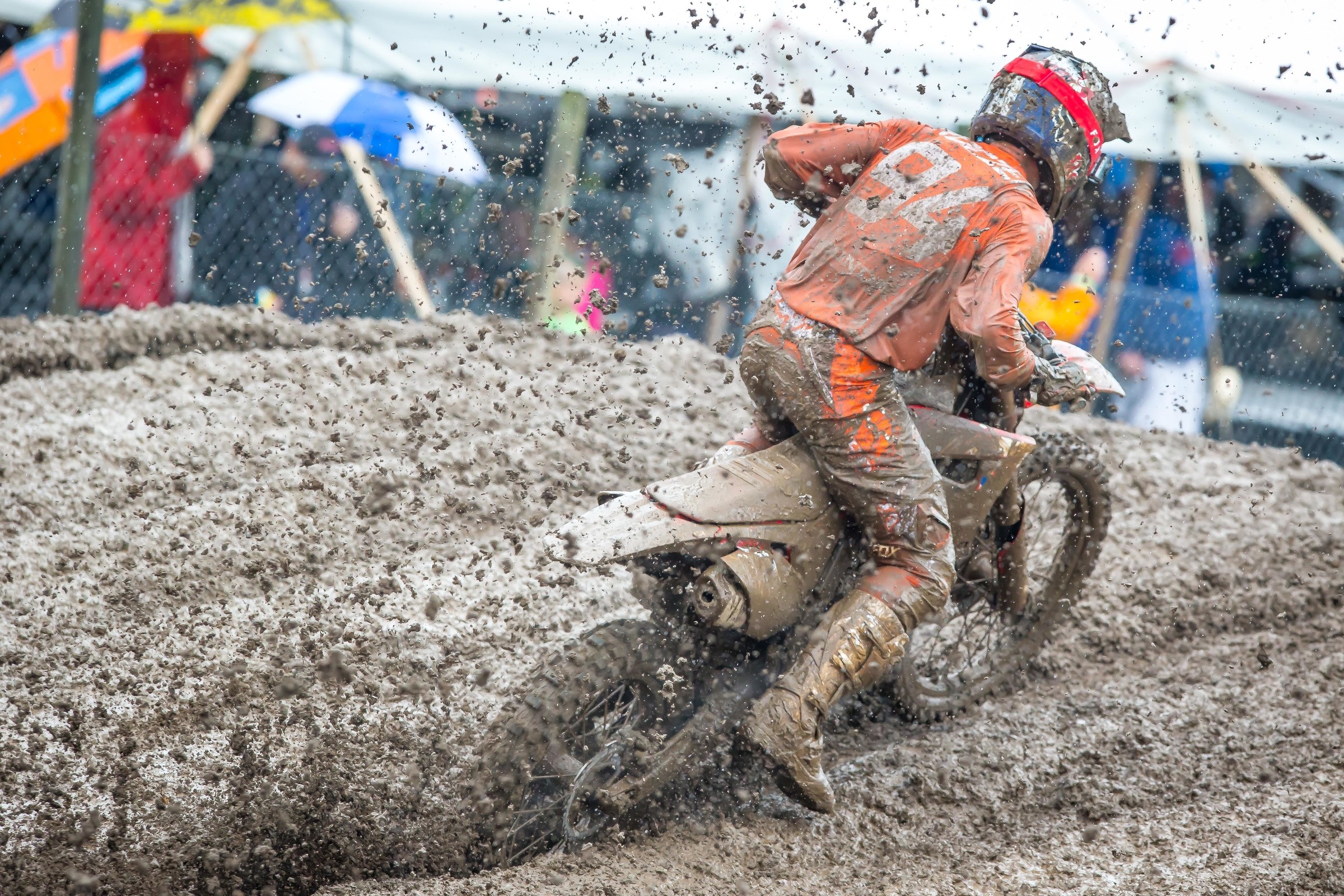 With just two rounds left in the 2018 Lucas Oil Pro Motocross Championship, Jason Thomas, veteran of 15-plus years of pro racing, grabbed some photos from a muddy round ten to explain how things went.

Blake Baggett is shown below in timed qualifying before the rains came. This particular jump is just after Screw U, and riders have a tough task, as the track literally bends in accordance with the jump. If Blake were to jump straight here, he would land either off the track or would be quickly headed in that direction. The fast line here is to turn and lean to the right off the face, keeping their momentum to the inside (right side). Blake has lifted his right leg to give more weight to the inside, but to also allow him to pivot more decisively once he makes contact with the ground. The toughest part about this landing is having the balance to position the bike exactly where you want it. If that’s executed correctly like Blake is hoping for, he will be able to open up the throttle and really accelerate toward the next tabletop. If he were to land five to ten feet further to the outside with his momentum pushing further out, he would be more concerned with redirecting himself than accelerating. This technique of leaning right with his foot extended will pay its dividend in the next 50 feet of racetrack.

It also should be noted how far forward he is sitting. That will give him optimal control over the front tire when he lands. The front tire will naturally want to drift outward on landing because that’s how the track’s momentum flows. For Blake to force it to stay tight to the inside, he needs every bit of pressure he can apply to the front end.

This is a noticeable difference in pro riders and novice riders (besides the obvious speed). Pro riders are thinking ahead instead of the current corner. Blake’s actions here are setting up for a fast line in the next section, not necessarily over the jump he is already jumping. To carry momentum and lower lap times, the track has to be put together like a puzzle.

Ken Roczen is shown here in this two-photo sequence during the first 450 moto. As he entered the first rut, I think he was sitting a little further back than he ideally would want. The giveaway for that is how far outward his leg is extended. He is bracing himself from losing front tire traction as he approaches the big hole in the rut (just ahead in the photo). Being just a tiny bit out of position will be reinforced a bit as he hits the next hole, forcing him to get out of the saddle (second photo). That inside leg is now dragged behind him as he fights to stay forward. His body position is okay in the second photo, but if he had been able to get further forward initially, he wouldn’t have lost inside leverage with his leg later in the sequence.

Keep in mind that Kenny is almost always in perfect form and this isn’t in any way being critical of his technique. I can rarely ever find him out of an ideal situation. The mud changes everything. He probably can’t really grip the handlebars, he can’t slide forward and backward as easily from the mud/water friction and weight, and, of course, the tires don’t have predictable traction.

The photo above is such a great representation of how Kenny rides compared to most. I don’t know if it is his European upbringing, watching Stefan Everts as a kid, or simply his own technique, but his ability to stand up through corners is awesome. Ninety-nine percent of all riders, whether pro or beginner, would be sitting down at this point of a corner. The necessary balance to pull this off is simply more than most possess.

Beyond that, standing here takes incredible leg and core strength. If you’re able to corner like this, though, it has its benefits. Kenny is able to allow the bike to work more efficiently, the suspension is not loaded, and it is absorbing bumps at the maximum. He is also more likely to carry corner speed, as there hasn’t been a big weight shift upon sitting. This is called “rolling the corner” and is defined by not needing any real acceleration because he hasn’t touched the brakes. He is using the natural momentum of the previous section instead of hard braking and hard acceleration that most novices would utilize. It’s an incredibly effective technique, but also incredibly difficult to master. This picture might not look like much, but to me, this is poetry in motion.

The first photo is what it feels like heading into a muddy Unadilla, ready to dominate. The second photo is generally how everyone feels after a muddy Unadilla when the track has slapped you back to reality.

There isn’t much as far as technique to comment on here; I just thought it was interesting to see how the weight of mud can affect a bike’s handling. In a normal moto, Webb would be nowhere near bottoming out works suspension on a landing this basic. With the added 50-plus pounds of mud, he is now easily blowing through the suspension damping. Most riders will go stiffer in the mud to avoid this, but it also makes the bike feel harsh if there are dry sections. It’s just another wrinkle that mud presents.