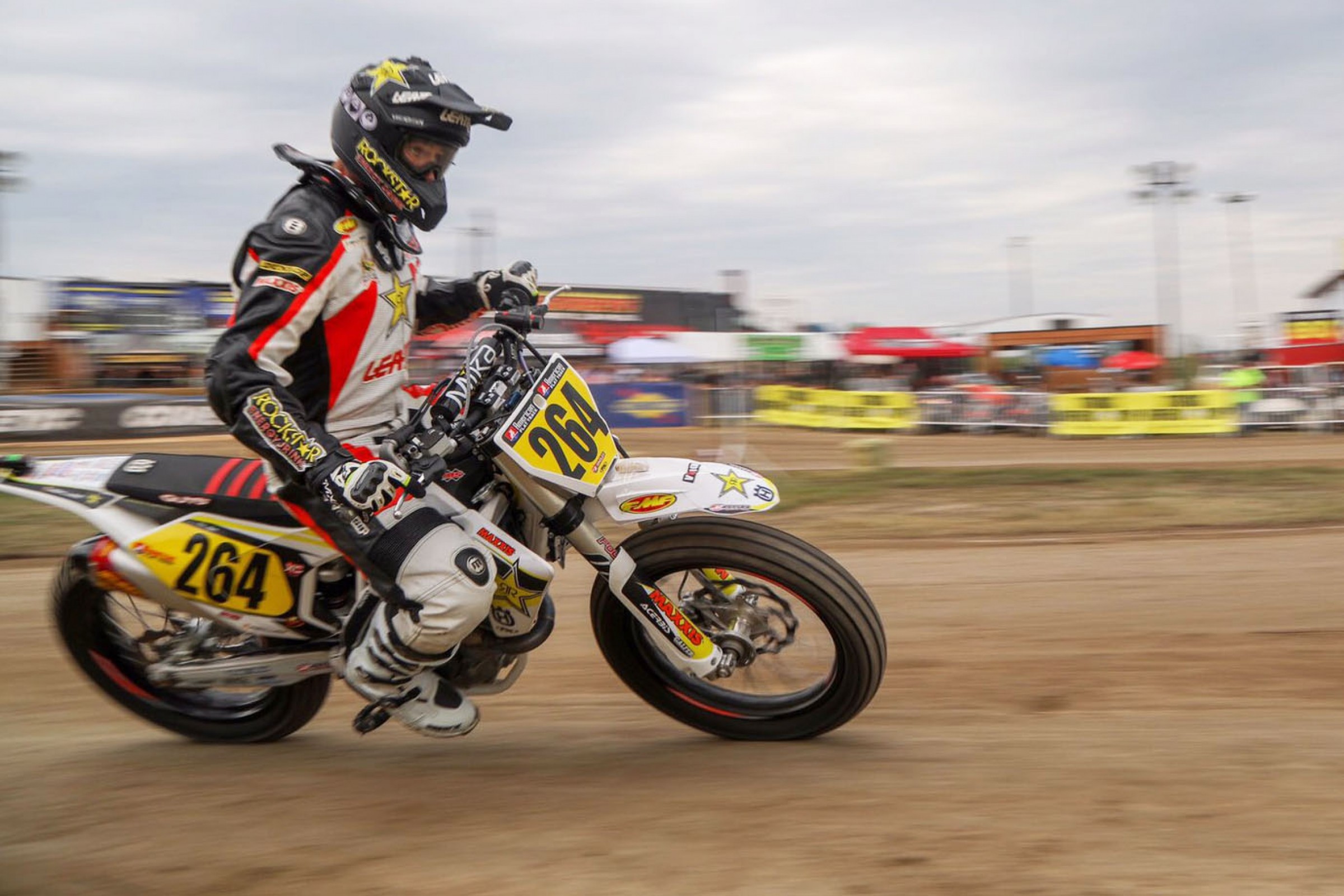 In just his second career American Flat Track race, Ryan Sipes took a surprising Singles Class win at the Buffalo Chip TT in Sturgis, South Dakota, over the weekend. We talk to him about his thoughts going into the race, how he fared on the track, and more.

I did win! It was crazy, man. Since I raced my first one at Springfield a few months ago, all I could think about was blowing it with my crash and how bad I wanted another shot at racing American Flat Track. I was pretty fired up for the TT in Sturgis.

The track at the Buffalo Chip was really cool. The layout had it all: tight turns, open turns, slow sections, fast sections, even two right-hand corners! It was super fun. The dirt reminded me of Thunder Valley in Colorado—it was great when it had moisture, but once it dried out, it was slick as snot. I’ve only ridden flat track a few times since May, so first practice I felt a little out of sorts, but I got better as the day went on. I made a lot of adjustments throughout as well, and all were positive. Big shout-out to the guys who gave me setup advice. Most of the American Flat Track community was pretty awesome and eager to help.

I was really happy to qualify third overall out of practice. That meant I had first gate pick for the heat race and a chance to get a good starting spot. The first turn is a right-hander in Sturgis, which is not common, and you want to be toward the inside to get a good start. It worked, as I holeshot my heat race and won. First gate pick for the semi!

About time to go up for the semi, it started raining. Flat track isn’t like moto where we ride no matter what. Maybe two-tenths of rain fell, and they put us on a delay, hoping the rain would stop and we could finish later that night. I told them to let us ride; I feel pretty good about my chances in the mud. They weren’t buying it. Once the rain stopped, I walked out on the track to check it out. I quickly understood why flat trackers don’t ride when its wet… I could barely walk on it. The track crew got to work packing the track in and trying to dry it out. It took a few hours, but we finally got to resume racing.

Well that was fun?? I still can’t believe I won an @americanflattrack Grand National! The Buffalo Chip TT was incredible. The track layout was super fun and my @husqvarnamotorcyclesusa FC450 was working great. I qualified third, won my heat, and got second in the semi which put me on the front row for the main. The track was tough to pass on so I knew if I pulled the holeshot I could get the job done. @jacoblehmann4 and @colefrederickson51 kept the pressure on but I held them off and did it! So pumped???? Big thanks to my good buddy @jdbeach95 for all the riding tips. I’ll work on those hips?? Also thanks to @hayden69gillim and family for letting me come practice and the help at the race Sunday! And special thanks to Austin at @rekluse_motorsports for helping out on race day!! And last but most important, massive thanks to all my sponsors for believing in me enough to let me do this crazy schedule. The plan is working! @rockstarenergy - @officialleatt - @maxxistires - @husqvarna_usa - @fmf73 - @xcgear17 - @rekluse_motorsports - @stevehatchracing - @motoolmx -@tmdesignworks - @maximausa - @powerbandracing - @coastalracing - @factoryeffex - @mikametals - @nitromousse - @imsproducts - #workitoutmassage - @acerbisusa - @galferusa - @gaerneusa - @motionpro - @dt1filtersusa - @guts_racing_inc - @motohose - @superbbatteries - @ctikneebraces - @hammernutrition - Airgroup - @meadecrossfit Photo: @americanflattrack

I got second in the semi, which was good enough to pick third for the main event. I pulled the holeshot and tried to focus on not making any mistakes. It had gotten really slick by then and the track was tricky. I could tell someone was right on my tail the whole time. I felt like I had good sections and he had good sections, and we kind of yo-yoed the entire race. I didn’t know who was behind me, and I was pretty nervous the last few laps just waiting for a T-bone, but it never happened. I was able to stay upright and take the win.

It was and still is pretty surreal to win a freakin’ Grand National flat track race. I can honestly say I never expected it or thought it was possible last fall when I first tried it out. Big thanks to my buddy JD Beach for introducing me to flat track and for all the coaching. I am having a blast with this.