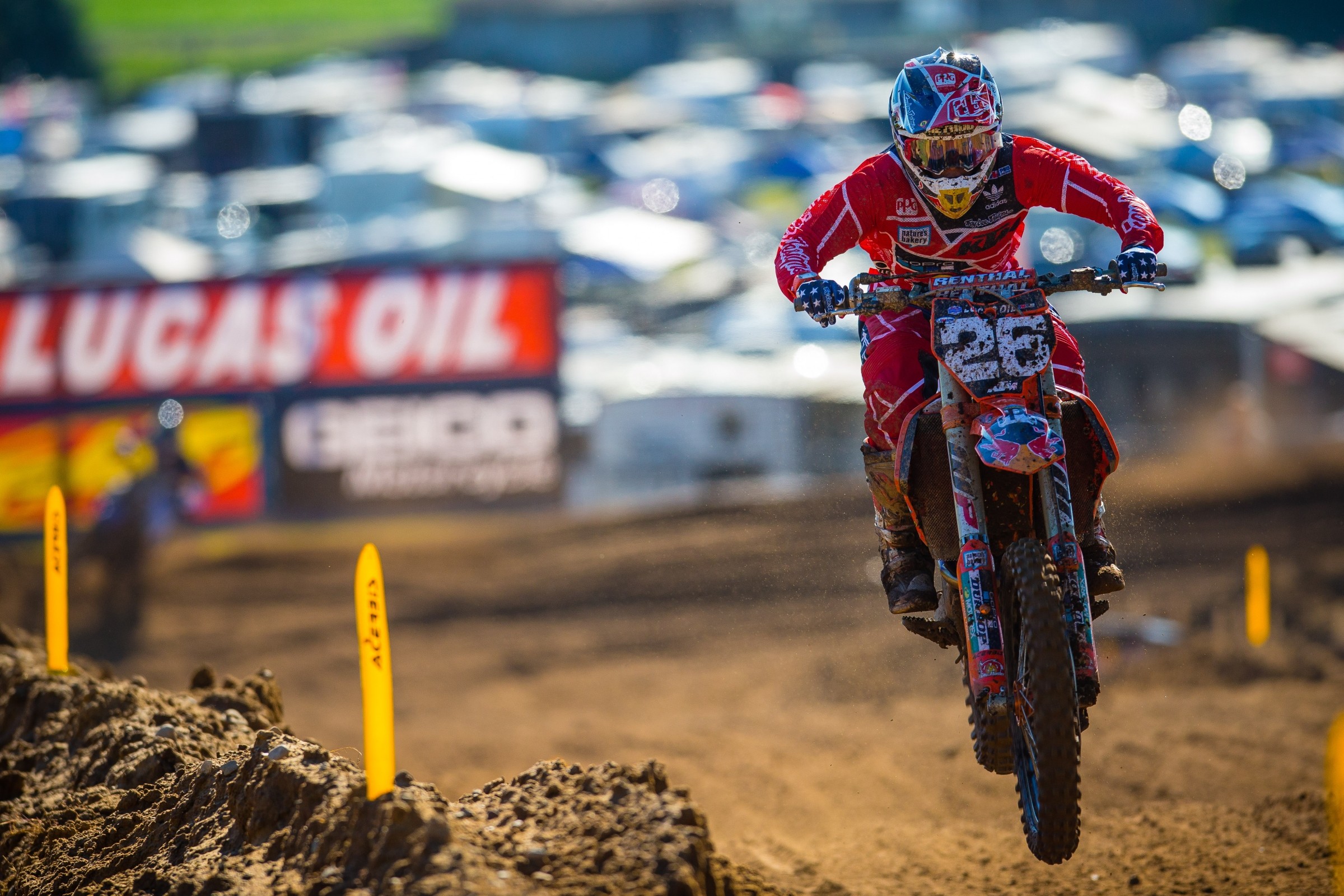 Just when it was starting to look like Eli Tomac might put together a season without any major drama, he suffered a mechanical DNF in the first moto at RedBud while running away with the win. The ensuing lousy gate pick for the second moto resulted in a bad start for Tomac, which led to mistakes and an eventual ninth place overall. That handed the points lead over to Marvin Musquin, who will be sporting the red plate this weekend at Spring Creek. Expect Tomac to do his best to take it back on Saturday.

After missing a ton of racing due to bad injuries, Ken Roczen won his first moto since 2016 two weeks ago at RedBud. Yes, he had some help when Tomac’s bike broke, but a win is a win, and you can’t take anything away from Roczen, who didn’t even know if he’d be able to race at the beginning of the season. And when it comes to a rider of Roczen’s caliber, you can’t help but wonder if that moto win just might be a sign of things to come. We’ll see if he can repeat the feat at Spring Creek.

Justin Hill is no stranger to dropping jaws—it seems to happen semi-regularly when he throws his leg over a 450—but he also has a habit of following up those brilliant performances with results that don’t seem to make any sense. For example, Hill went 4-6 at High Point, his first 450 race of the season, but hasn’t been able to reach that level since. You just never know what you’re going to get with when he lines up, especially on a 450. After a couple of tough motos, including a first-turn crash at Southwick that sliced a hole in his arm, he suddenly bounced back at RedBud for a fourth in moto two. One thing’s certain: He’s usually pretty fun to watch. We’ll see what unfolds when the gate drops this weekend.

There’s still a lot of racing left, but it’s getting pretty close to crunch time for Alex Martin, who currently trails 250 Class championship leader Aaron Plessinger by 35 points with ten motos remaining. Martin can’t afford to give up any more points to Plessinger, and he badly needs to start closing the gap if he’s going to realistically be in the hunt for a title as the season winds down. Spring Creek, where Martin literally grew up, would be a good place to start.

Monster Energy/Pro Circuit Kawasaki rider Austin Forkner has found himself on the losing end of collisions with other riders—Martin at Southwick and Plessinger at RedBud—while leading lately. He only scored a single point in those two motos combined after he was in a position to score the full max. If something like this happens to Forkner again at Spring Creek, we’ll just have to assume he’s done something the moto gods find terribly offensive.

The hard times at Monster Energy/Pro Circuit Kawasaki haven’t been limited strictly to Forkner. Adam Cianciarulo had to take the whole season off due to knee surgery, Joey Savatagy had a mechanical DNF at Thunder Valley that zapped what looked like a sure win, Garrett Marchbanks missed five motos after getting hurt his knee at High Point, Savatgy went down while running second at RedBud… we could go on and on. Point is, it hasn’t been great for Pro Circuit this year. With Savatgy and Forkner still out there, there’s always the chance of a turnaround. Will it happen at Spring Creek?

Plenty of tracks have a signature section, and at Spring Creek, it’s the infamous sand whoops that parallel the creek. Plenty of crashes and passes always take place there every year, and getting through them cleanly is critical—if a rider gets out of line or hits a whoop wrong, it’s extremely difficult to regain any momentum before exiting the section. In other words, large chunks of time can be made up or lost here. We’ll see who benefits from this on Saturday.

If you’ve been following Aaron Plessinger’s season, you know he’s had three perfect rounds so far: Glen Helen, High Point, and RedBud. Unfortunately for Plessinger, he’s followed those rounds with less dominant performances. He went 6-4 after Glen Helen and 9-5 after High Point. He’s sporting another 1-1 after RedBud. Will his up-and-down scores persist at Spring Creek, or will he reverse the trend and win again?

If you were going to vote for rookie of the year right now, you’d have to be crazy not to cast your vote for Justin Cooper. Yes, we know, he rode three rounds last year after Loretta’s, but we’re putting him in the rookie column. The Monster Energy/Yamalube/Star Racing Yamaha rider has been extremely good this season. He’s led laps, been on the podium a couple times, and even won a moto at Thunder Valley. Heading into Southwick, he was even getting into the title conversation, but a big crash while running third in the first moto there sapped some of his momentum. After a weekend off, can he get pack to podium form at Spring Creek?

Chase Sexton has been just a tad under the radar this season. After seven rounds, the GEICO Honda rider sits eighth in points and has yet to finish on the podium in a moto, although his 8-4 scores at Muddy Creek did earn him third overall. Sexton is a talented rider with a ton of speed and has been pretty quick during qualifying at times, so it’s a little surprising to see him with an average finish of 10.4. If he can get a pair of good starts at Spring Creek, look for him to notch his best moto scores of the season.