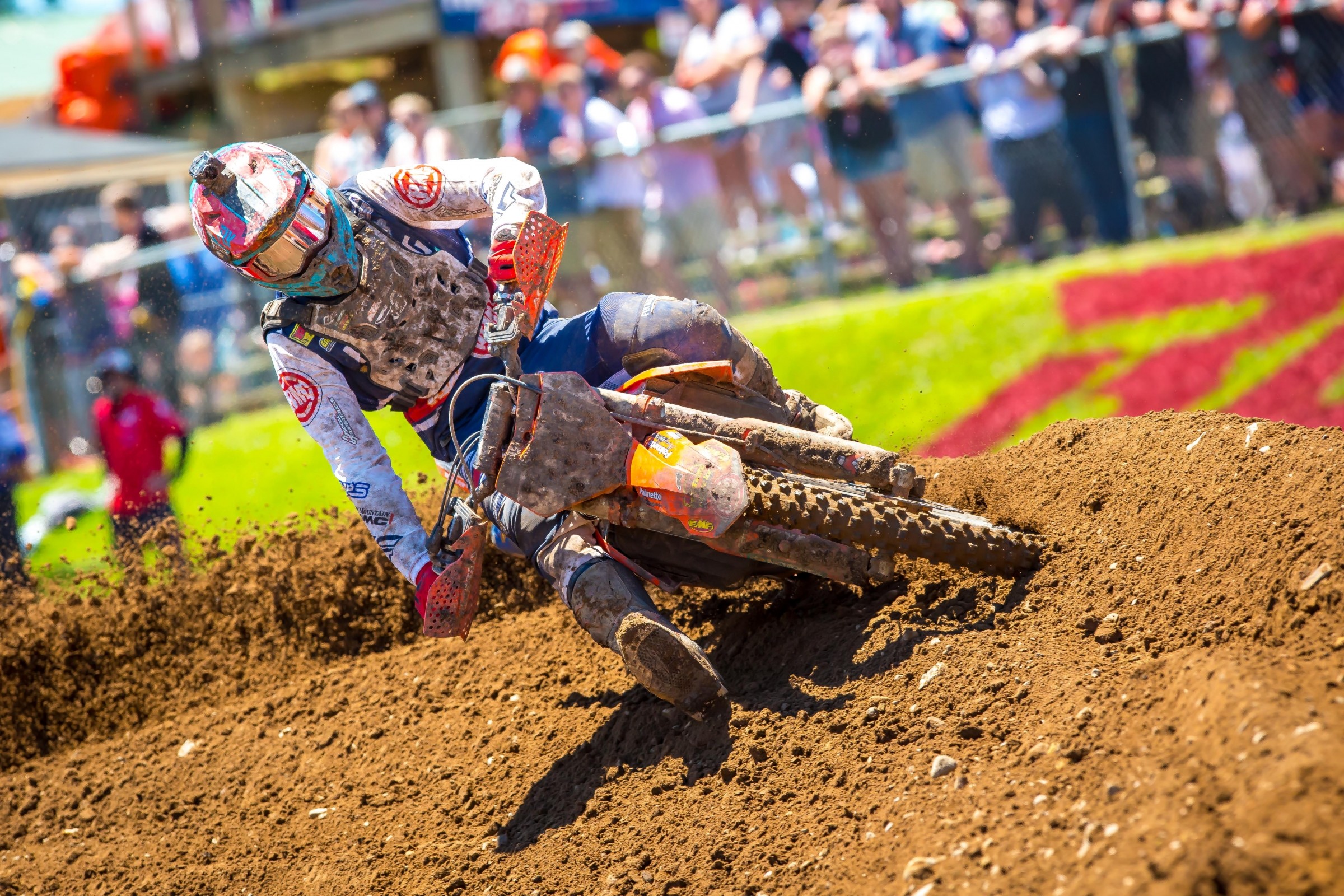 Rocky Mountain ATV/MC-WPS-KTM’s Benny Bloss is having a breakout season in his second year with the team. Currently seventh in 450 points, Bloss captured his first career moto podium on Saturday in the first moto at RedBud. A crash in the second moto relegated him to 11th overall, but still, a successful day for the former Horizon Award winner. Steve Matthes talked with him after the race about his finish and more.

Racer X: Third in the first moto. Let’s not talk about the second. Let’s talk about positives. That was awesome, man. Great ride.
Benny Bloss: Thank you. It was pretty sick. I got a good start and then just tried to ride my own race. I kind of fluctuated from fifth to fourth, and then I went to third and then went back to fourth. Then [Eli] Tomac obviously had his problem. Ended up third, which was crazy. This is like the best place to have your first-ever podium moto. It was awesome. But then second moto, things went a little downhill.

I thought you were pulling it in, to be honest, the way you were riding. I thought, he’s going to pull it in.
I don’t know.

I’m giving you credit. Good job staying out there, I guess.
Yeah, well, thank you. I pulled into the mechanics’ area, kind of talked things over with Derek, see what he thought.

Did he ask you about wrestling at all?
No, he actually didn’t. I told him that I was a little blurry and he was like, well, finish the moto. Tried to get some points but it didn’t happen.

How’d you go down, though? Tell us how it happened.
It was the section where [Blake] Baggett crashed in the first moto, like three corners before the leap, the sweeper. Just lost my front end and went straight to my head. Wasn’t enjoyable. I didn’t really enjoy it.

On the enjoyable scale, not as good as moto one?
It was off of moto one, for sure. Moto one was like all-time high, best feeling I’ve ever had, and then moto two just shot that down.

Crazy how this sport works, right?
Yeah. It’s not really what I wanted.

Before that though, you and Baggett, you tucked in behind him. It looked like you were getting some guys together. You were following his vortex.
I was trying to stay latched onto his wheel as much as I could. He kind of gapped me a little bit, but I felt like if I could stay on him, we could make passes together and maybe get another top-five moto.

Were you freaking out when you were in third?
Honestly at first, I was like, wow, this is happening. Then I was like, there’s still like half the moto left to go. I think there was still 20 plus two to go. Then Marv [Musquin] obviously passed me and I was like, all right, fourth is still good. Just keep it good and solid. I saw Tomac. I think that was three laps to go. When that happened, I knew where [Justin] Barcia was. He was pretty far back. I was like, all right, I got this. I will not let him catch me. Then the last lap, I went over the leap and I was like, all right, we got two corners left. This is crazy. Then they pointed me to go to the podium. I was just like, that really happened. This is insane. It was sick.

Great job. Let’s just focus on that first moto. Really something else. You probably would have been third or fourth overall without the crash. Really good day for you. Millville’s not far off a track like this. You can have more success there.
Yeah, I grew up racing Millville a lot so I’m pretty excited for that. Thank you for talking to me. Go Capitals.

What’s going on for next year? They should actually probably have a deal for you right now.
Yeah, so far, I don’t have anything. Trying to talk to as many people as I can, but as of right now, nothing on the table. Just looking to see what we can do. Put in some more good rides like that and hopefully we can get a ride.

Instead of “RedBud,” you should have had the fans chanting, “Give me a contract.”
That would have been nice, for sure.