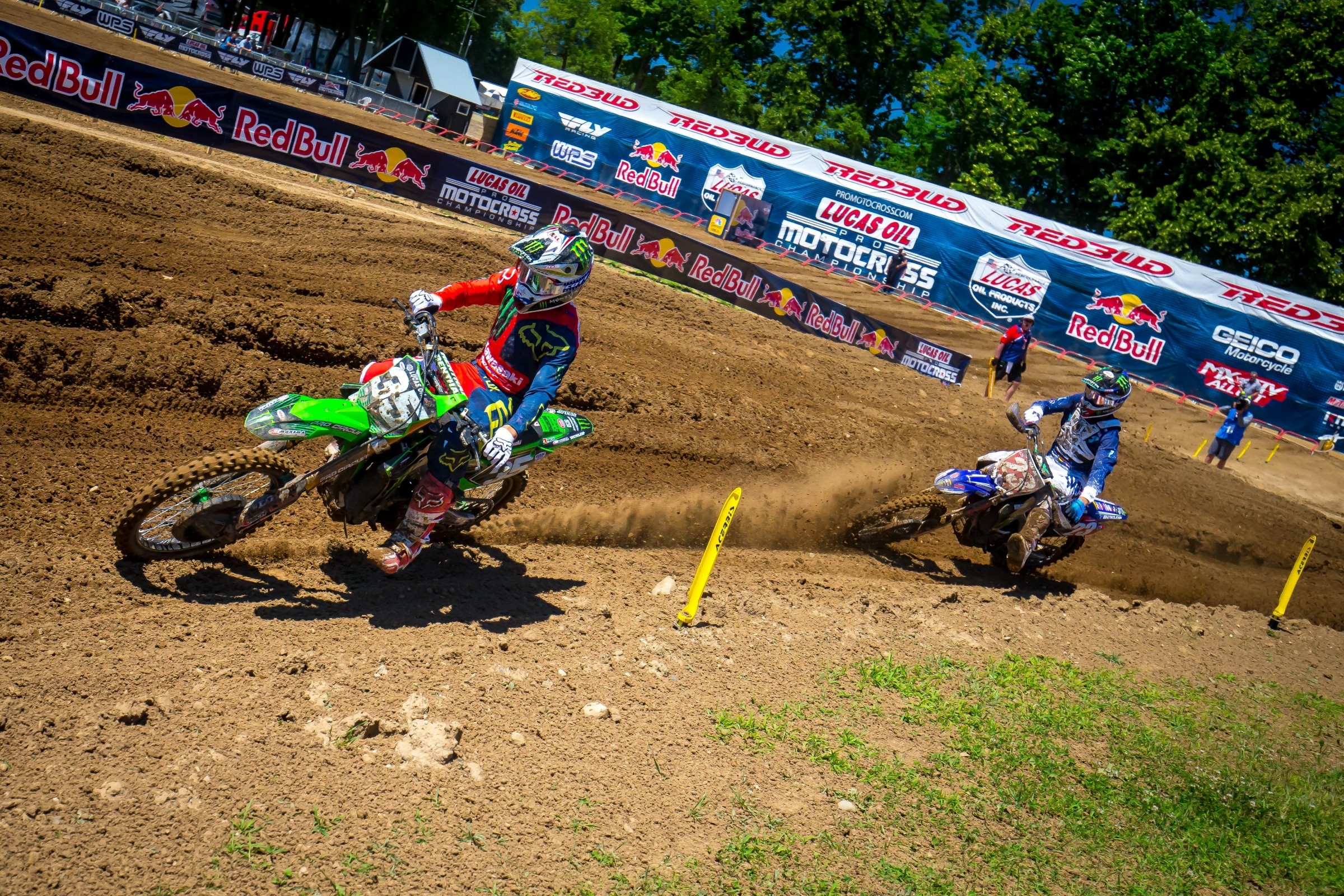 If you’re Austin Forkner, the one thing you didn’t want to happen again is what happened at Southwick. But at RedBud, it happened again. Yup, Forkner was leading the second moto at Southwick before Alex Martin went for an aggressive pass that left them both on the ground. The first moto at RedBud, Forkner was leading before an aggressive pass by Aaron Plessinger left Forkner on the ground.

Around those crashes, which led to zero-point finishes, Forkner won Southwick’s first moto and rebounded for second in moto two at RedBud. Despite the drama, Austin hasn’t talked any crap on either Martin or Plessinger—it appears both are being ruled as racing incidents.

He much rather wishes he had won those races, though! Steve Matthes talked to him after RedBud.

Racer X: You have really been through the ringer. Southwick, we saw you had for sure a second, probably a win, smashed away from you. This week, after that first moto, you had to have been like, did I step on a black cat? What did I do?
Austin Forkner: Yeah. I was definitely questioning some stuff after that first moto. Two weekends in a row kind of not really my fault. I left the door open a little bit in the first moto. I went outside, and even at the apex of the turn, I kind of glanced down and I was like, all right, he’s not going to get there. Then just, bam. My front tire hit his back tire and it got sucked up and just basically looped it. Landed on my knee. Bike was all tweaked up. I got 35th. I didn’t even finish.

At that point you’re just going “eff my life.”
Yeah. I came from whatever. I got the holeshot, got passed to third. Came back, got into the lead, and then that happens. I feel like I was the fastest guy today. I had the fastest lap in both motos, I think. So obviously if I had the fastest lap both motos, I was the fastest guy today, and just didn’t work out. Another week that kind of just didn’t go the way I wanted it to. But I’m really happy with my bike right now and my riding. We did some testing this week and got it pretty mint.

The second moto you came from fifth or sixth, from what I saw, into second. That was nice.
Yeah, I started five gates from the outside and got seventh-, eighth-place start, which is pretty damn good from that far out. Then I came from there, had to pass some pretty fast guys. Got into second and just put it kind of on cruise control. I put on a charge to catch Aaron [Plessinger]. I think I got it down to four seconds at one point, and then just the track was so gnarly that I could have put a late-race charge in, but I wanted to finish one moto. I had a second, so I was like, all right. Just finish.

How frustrating has it been for you? We thought you’d be one of these title contenders in here. Hangtown crashed out, Southwick. It’s been hot and cold for you. Is it tough during the week? Again, we know you have the speed. I think everybody knows that. But has it been tough during the week to try to block all that out and stay positive?
Honestly, I feel like the weeks that I do bad or that I have something go wrong are more motivating when I’m training. That happened and especially after Southwick, this week I was like, all right, I’m one of the fastest guys and just bad luck. I can do the same thing this weekend at RedBud. Just keep doing what I’m doing.

That way it’s a positive if you turn it into that, right?
Yeah, obviously it’s not because it sucks, but you’ve just got to turn it into a positive and train harder during the week.

So the bet was if you didn’t win by RedBud, [Benny] Bloss said you were going to shave your head, which I’m endorsing because you and your buddy have the same haircuts and I get you confused and nobody knows who’s who. So we’re at RedBud. He just drove off and you still have your hair.
Well, it was our trainer Robbie Reynard that made that bet and it was never a fully—I wasn’t like, I’ll do it for sure. But then he started being like, “Are you not confident that you can win by RedBud?” He started throwing that stuff at me, and I was like, I think I can win. He was like, well then what’s the problem with the bet? I was never like, okay, I’ll do it. I was just kind of like, we’ll see. Benny obviously is on board with it.

Let’s shave your buddy’s hair. That’ll work.
Benny said—I was like, “Well, why don’t you shave your hair?” He says, “If you shave my hair, it’s not going to grow back.” I guess he has a receding hairline and he’s afraid that his hair days are coming to an end. He’s like, “Your hair will grow back, no problem. You’ve got a lot of hair.” I’m like, I don’t want to hear it.

How about Benny? [Third in moto one, crashed and finished 23rd in moto two] You don’t just get one good ride and then rest on the laurels and do shitty the second moto, right?
No. I wanted to make a bet with him. I was like, all right, if I have to win one, you have to get a podium at one. That’s what the bet was. I had to win one, he had to podium, and one of my other friends, this is his first race, he had to make the motos. All of us lost.