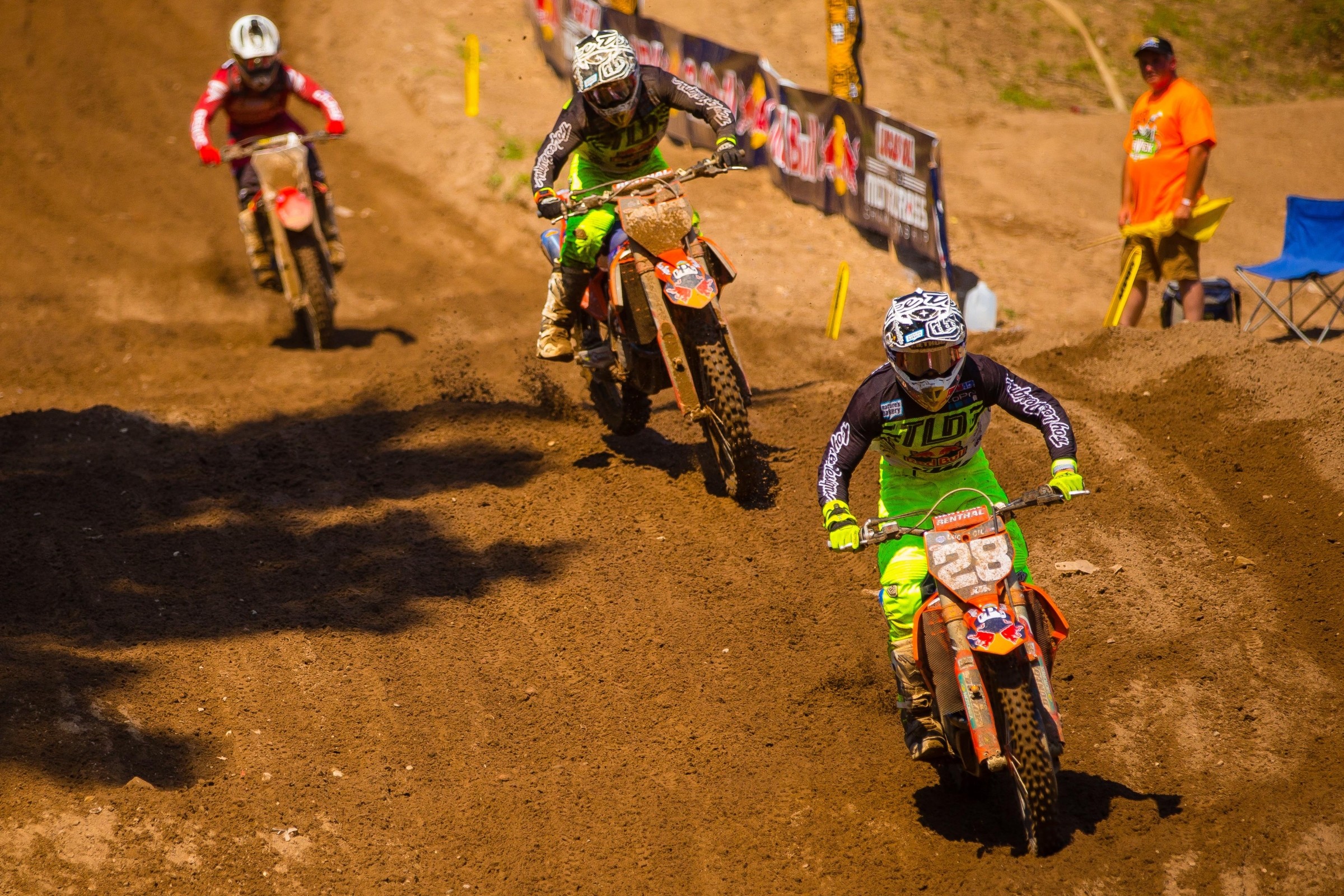 Things definitely didn’t go the way Alex Martin wanted them to last week at Southwick when he ran it in hot on Austin Forkner and took him down. Martin was going for the win, but the move took him out of the running and added to an already high crash count for Martin so far this season. The good news for Martin is that Aaron Plessinger didn’t have the best day, so Martin was still able to make up some ground in the championship. He now trails Plessinger by 23 points. Will that gap grow or shrink at RedBud? —Aaron Hansel

Thanks to a pair of crashes from Eli Tomac last week in the second moto, his win streak came to an end at Southwick. If you’re a Tomac fan, the good news is there wasn’t any damage done to his championship lead—he and overall winner Marvin Musquin tied for points on the day. You can also be sure Tomac is going to win more races before the season ends, and he just might get another streak started this Saturday at RedBud. —Hansel

Dylan Ferrandis has been spectacular since coming back from a broken arm suffered during supercross. He went 8-3 at his first race back, won a moto the next weekend, and capped it off by winning the first national of his career at Southwick. He’s definitely not in the championship hunt, but from here on out, you can expect him to be a threat to win at each round. We’ll see if he goes back-to-back at RedBud. —Hansel

The heartbreak of the day at Southwick definitely goes to Austin Forkner. After winning the first moto despite immense pressure from Alex Martin, the Monster Energy/Pro Circuit Kawasaki rider was on his way to winning the second moto and overall before Martin took them both down in a right-hander. It would have been a much-needed with for the team as well—it’s been a rough summer for them. We’ll see if Forkner can come out at RedBud and get the win he was so tantalizingly close to at Southwick. —Hansel

Last week, RJ Hampshire didn’t even know if he was going to race in the hours leading up to Southwick—he was pretty banged up following a hard crash at Muddy Creek. But race he did, and he even ended up on the podium in the second moto with a third. With Jeremy Martin out for the season, GEICO Honda needs someone else to get up front and lead. We’ll see if Hampshire is that guy at RedBud. —Hansel

Man, what a week... I told myself last Sunday I was going racing this weekend no matter what. After the first moto I wasn’t even sure if I was going out for the second one. Glad we sucked it up today ????. Thanks team @fchonda

As usual, the 250 Class is both wildly entertaining (minus the injuries, of course) and about as predictable as the weather on High Point weekend. This has been especially true the last two rounds, which produced two first-time winners—Shane McElrath at Muddy Creek and Dylan Ferrandis at Southwick. There are plenty of fast and capable riders still waiting on that elusive first national win, too, so it wouldn't be a surprise if the series produced a third first-time winner in as many weeks. —Hansel

Former Grand Prix rider Jake Nicholls will make his U.S. motocross debut this weekend. Sporting #454 on a Honda, Nicholls will race the 450 Class in hopes of doing well and having a chance of being selected for Team Great Britain for the Motocross of Nations at RedBud in October. Nicholls, who left the Grand Prix circuit and now competes locally in the U.K., raced a Canadian National earlier this year and finished third overall. We’ll see how he does Saturday on this side of the pond. —Chase Stallo

Cooper Webb and Justin Bogle made their 2018 Lucas Oil Pro Motocross season debuts last weekend at Southwick—not exactly an easy track to make your return. It was hot, and The Wick got super rough. Webb had the better day of the two with an eighth overall; Bogle showed he didn’t lose his starting prowess, grabbing the holeshot in moto one. He finished 20th overall. With mild temperatures (see below) expected this weekend and a race under their belt, let’s see how the duo fare in their second race back. —Stallo

At this point in the season, we typically talk about the heat and humidity and how we’ll find out who has and hasn’t been training. Well, not this weekend. RedBud, which is typically super-hot and super-humid, will be great on Saturday. Highs are expected to only reach 80 degrees and it will be sunny all day. —Stallo

The promising Monster Energy/Pro Circuit Kawasaki rookie has been out since High Point with a knee injury, but he will be back in action at RedBud. Prior to his injury, Marchbanks had put in four top-ten moto finishes, with a season-best sixth coming in moto two at Hangtown. We’ll see if he can jump back in the mix this weekend. —Stallo