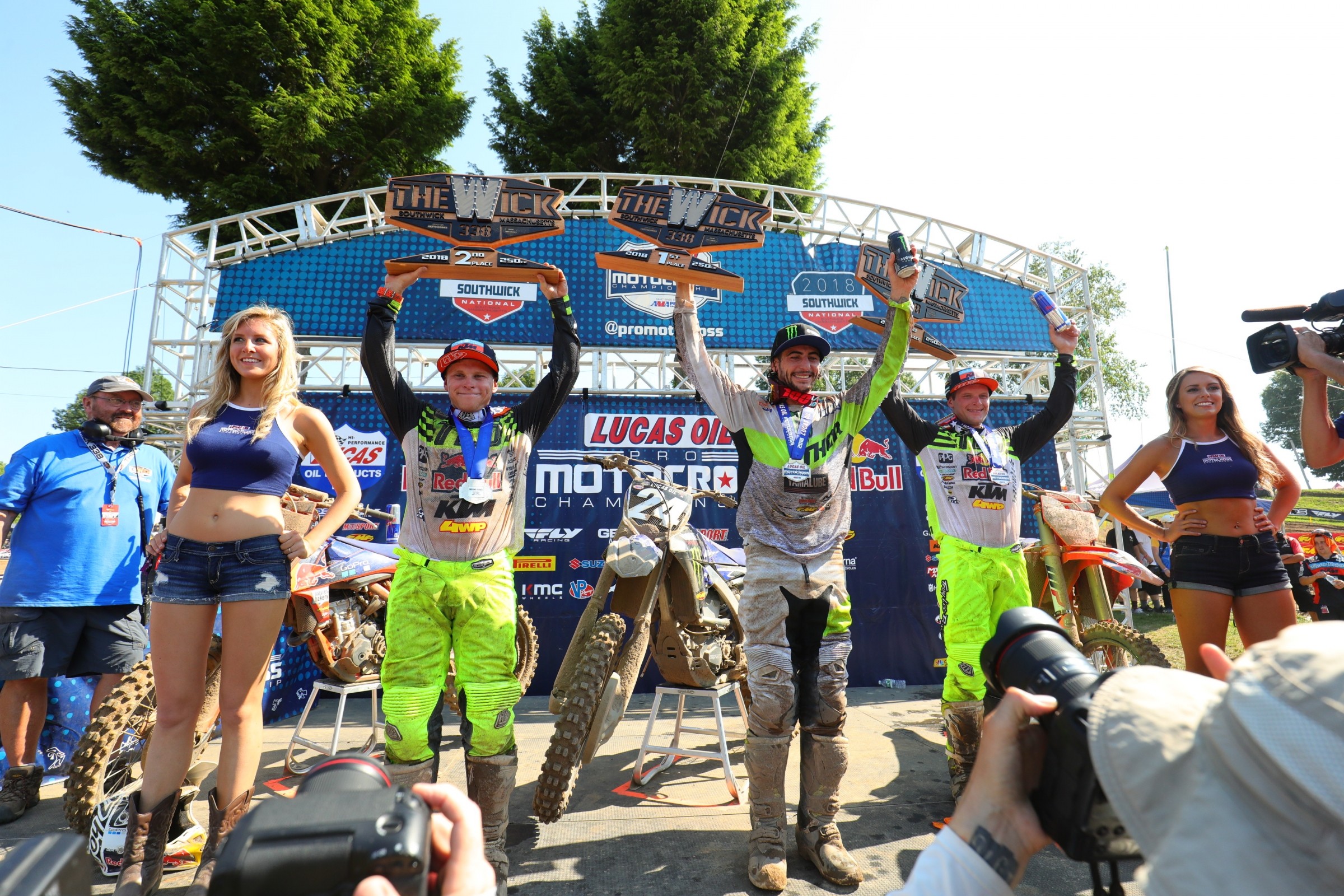 Racer X: Dylan, it seems like Southwick is very, very good to you. Take us through your afternoon.
Dylan Ferrandis: Yeah, definitely. My key is, really, the last four or five years training in Europe and I trained in sand for multiple GPs, and that’s definitely I think what’s helped me today on this kind of track because the experience on the tracks more difficult than today sometimes in GP like Lommel or Valkenswaard. I think that’s all the experience back in Europe that’s helped me for this race.

Alex, obviously second moto I know that you’re a very clean rider, but things got a bit physical out there.
Alex Martin: Yeah, it doesn’t normally happen to me, but I sat behind [Austin] Forkner. I started eighth in the first moto and tracked him down and was running behind him. I was just kind of like, second moto, it’s going to happen. He was riding strong second moto. He wanted that win real bad. It got to the point with like four laps left where I was like, “Man, I’m going to have to make a serious pass and try and get physical to do something,” because he was still riding pretty strong. I had caught him from probably eight seconds back. Then Dylan was coming as well, so I knew we needed to get going. I had a line picked out in the back, and for a couple laps I thought about it and I finally pulled the trigger. I felt like I had the front wheel kind of on him and he came over and we locked bars and the rest is history. So, on the ground. Luckily I was able to get up in fourth. I hope he’s okay. I went over and apologized to him. Obviously, we don’t mean for those things to happen, but when you’re going for a win at the top level of the sport, sometimes you kind of give her the berries a little too much. All in all, happy to be on the podium in second.

Shane, last week it was an overall win. This week another third. You’re becoming quite a regular on the podium in the outdoors.
Shane McElrath: Yeah. Actually, I broke my outdoor podium record today. I got two in a year. So it’s a big step for me. Today I really struggled with the bike all day. Just couldn’t really get it dialed in. With that, being on the podium feels about like a win just for having an off-day not feeling very good. It’s good to be on the podium, and same with Alex. Having two of the [Troy Lee Designs] KTM guys up here, it’s nice. The last weekends, Dylan has won the last two motos. I really wanted the last one. I haven't won a moto yet. He keeps one-upping me. Next weekend for Red Bud, we’re excited.

Alex, what did you change up between the previous couple rounds and here? You looked a little better today.
Martin: First three rounds we kind of had a shock setting that was working pretty well, but there was a couple things I didn’t like about it, so we just changed some spring rates and just some little stuff. Then I was basically on the ground for the next four motos. So we were thinking maybe that’s not the right direction. So this week we went a little stiffer, a little more holdup. Today I thought it worked good. Obviously, I did crash the second moto, but that was really on my own accord. But TLD has been great with trying to make us comfortable and try and get us better and faster on the bike. So we’re always trying things. Sometimes it goes the right way, sometimes it doesn’t. I feel like we made a positive step in the right direction today.

Dylan, it was kind of cool to see some French fans in the first turn. Had the flag out there and helped you with the celebration.
Ferrandis: For sure. I see it, but I see only one French flag and maybe four French people today.

Dylan, I don’t believe it’s ever been done where two riders from the country of France have won on the same day. We’ve had plenty with Jean-Michel Bayle and David Vuillemin and on and on, but I don’t know if we’ve ever had two on the same day win their respective classes. If that’s the case and you’re the first one, tell us how that would kind of parley into the French folklore, if you will.
Ferrandis: Marvin won today?

Yes.
Ferrandis: I didn’t know. That’s awesome. I know that in supercross in 2001 I think DV and [Stephane] Roncada won on 125 and 250, but in outdoors it never happened. So that’s awesome for sure. I didn’t know that he won. Stoked. It’s good. We showed that we are a good country. It’s good for the end of the year. That shows that we’re going to have a nice Motocross of Nations in United States at RedBud, I think.

Is it true that Tim Cotter picked you up hitchhiking from the airport to take you to the rental car place?
Ferrandis: Yeah, it’s true. My hotel was one mile from the rental car and I don’t want to take an Uber. We do some, I don’t know what you call it English, and he took us.

Heading into RedBud, what’s your takes? Are you going to plan on staying on the podium, Shane?
McElrath: That’s what we’re going for. We want to win a moto. With that, that really gives us a good shot at an overall and a podium. I like RedBud. It’s one of my favorite tracks on the circuit. I’m excited for it.

Martin: I’ve done good at RedBud the last couple years. It’s close to Millville for me. I always used to go over there as an amateur. We’d camp out in the backyard and my dad would help Tim Richie with the track. So I have some good memories from RedBud. I enjoy the track. It seems to be the biggest race on the circuit. It has a big crowd. It’s crazy. Fun jumps, big jumps. You can throw some whips. I’m looking forward to it for sure. We’ll have a good week down in Florida training and looking forward to RedBud next weekend.