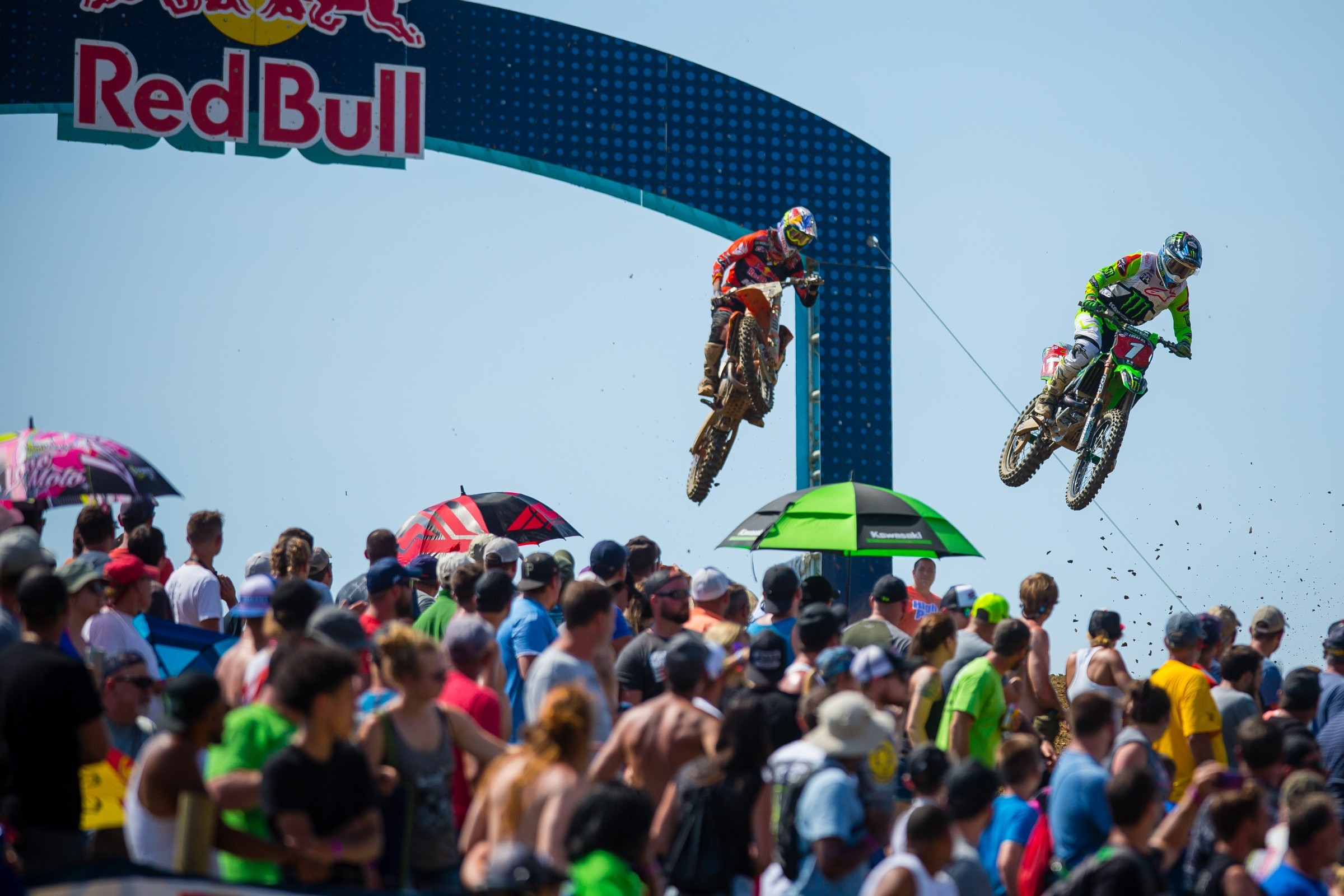 Pro Motocross returned to High Point after taking a one-week break, and it did not disappoint. Marvin Musquin ended Tomac's six-moto win streak in the first moto, and then the pair had an all-time battle in the second moto that came down to the final few turns, all while weaving through some lapped riders.

In the 250 Class, Aaron Plessinger reminded everyone how good he is at navigating deep ruts by leading every lap of moto one and then taking the lead in moto two, as Jeremy Martin had bike trouble and had to retire from the race.

Let’s dive into the lap data to figure out how these races were won and lost with this week’s Sign of the (Lap) Times.

Moto two at High Point was about as good of a race as you can get on an outdoor track. After 33 minutes of navigating a really tricky track, Musquin and Tomac were separated by just over a second and were even side by side going into some corners.

Because there were so many ruts to choose from and most of them were peg-deep by the end of the second moto, one mistake could mean multiple seconds lost. It also meant it was even harder than normal for lapped riders to get out of the way for the top riders. If you take a look at their lap times below, you can see a dramatic increase in their times on lap six, which just happened to be the first lap where they started to get into the lapped riders.

Musquin and Tomac both had their take on the lappers in the press conference after the race.

Racer X: In the second one, did you know where he was going to try to make moves on you, or could you feel where he was kind of going to do something different?
Tomac: Oh yeah. I knew the last two laps it was going to be game-on. At the same time, we were both darting through traffic and lappers. That was a whole other game to play with that. It was like playing a game of chess. I knew if I could get to the top of this hill up here, it was at least pretty one-lined down through the ruts. It wasn’t easy to play defense, but you could do it here because some of the inside ruts were so dominant.

Marvin, he mentioned the lappers. It looked like you weren’t able to get to some of your lines kind of late in the race. How big of a problem were the lappers?
Musquin: Yeah, sometimes when you’re the leader, it’s hard when you first caught up to the lappers. Those guys were battling for their spots. I’m pretty sure sometimes when they don’t look, they think that’s the guy that is coming that they’re battling with. I could see that sometimes. The guy would just get back on the main line and I’m like, “Oh no, get out of the way!” It’s so hard. It was so intense. Physically you were at the limit, and it’s getting close to the end. Man, like Eli said, it’s a different game to deal with lappers. It makes it even harder on us sometimes. Sometimes you take different lines and the feeling’s not the same. You’re trying hard, but it works, it doesn’t work. You never know. At the end, it was definitely tough with the lappers today. But we made the best out of it.

Blake Baggett really needed a good race at High Point to jump-start his championship hopes, as he was 50 points out of the lead going into the weekend. After the morning's qualifying sessions, Baggett was clearly the fastest rider, logging a time that was over a second faster than Tomac and the rest of the field. It looked like it was going to be the weekend he got back on track. But two poor starts ruined any chance of that, and Baggett was forced to go into salvage mode.

We didn't get to see it on TV, but Baggett's salvage job in moto one was pretty incredible. He finished the first lap in 33rd, by lap four he was in the top ten, and by lap nine he was in fifth, where he stayed for the rest of the moto.

The second moto was more of the same story. Another bad start and gaining massive ground during the opening laps. But his ceiling was a little lower this time and he could only make it up to seventh. The results won't show it, but these were two pretty incredible rides from the #4.

The gnarly conditions probably played to the advantage of Plessinger, as he used his past GNCC experience and long legs to navigate the deep ruts with ease, and he walked away the moto one victory without much stress. After the race, he commented how the dirt at High Point is similar to what he was used to growing up. He said, "Line selection here, it could probably win or lose you the race. I think these ruts can get bad enough to suck you down and drag you down to the ground. I think it happened to a couple people today. It’s really important here to pick the right line, and if there is no right line, you better find a good one because if not, then you’re hitting the deck for sure. This dirt is a lot like what I used to ride in Ohio, so I kind of really gel with this track and I think it showed today."

Looking at his lap times compared to Tomac's in moto one, they are pretty comparable. Tomac had the fastest time between the two, but it's close. The real difference came at the end of the two motos, where Tomac was chasing Musquin and Plessinger was in cruise-control out front. We'll see if Plessinger can maintain this confidence and speed going forward and hold onto that red background.