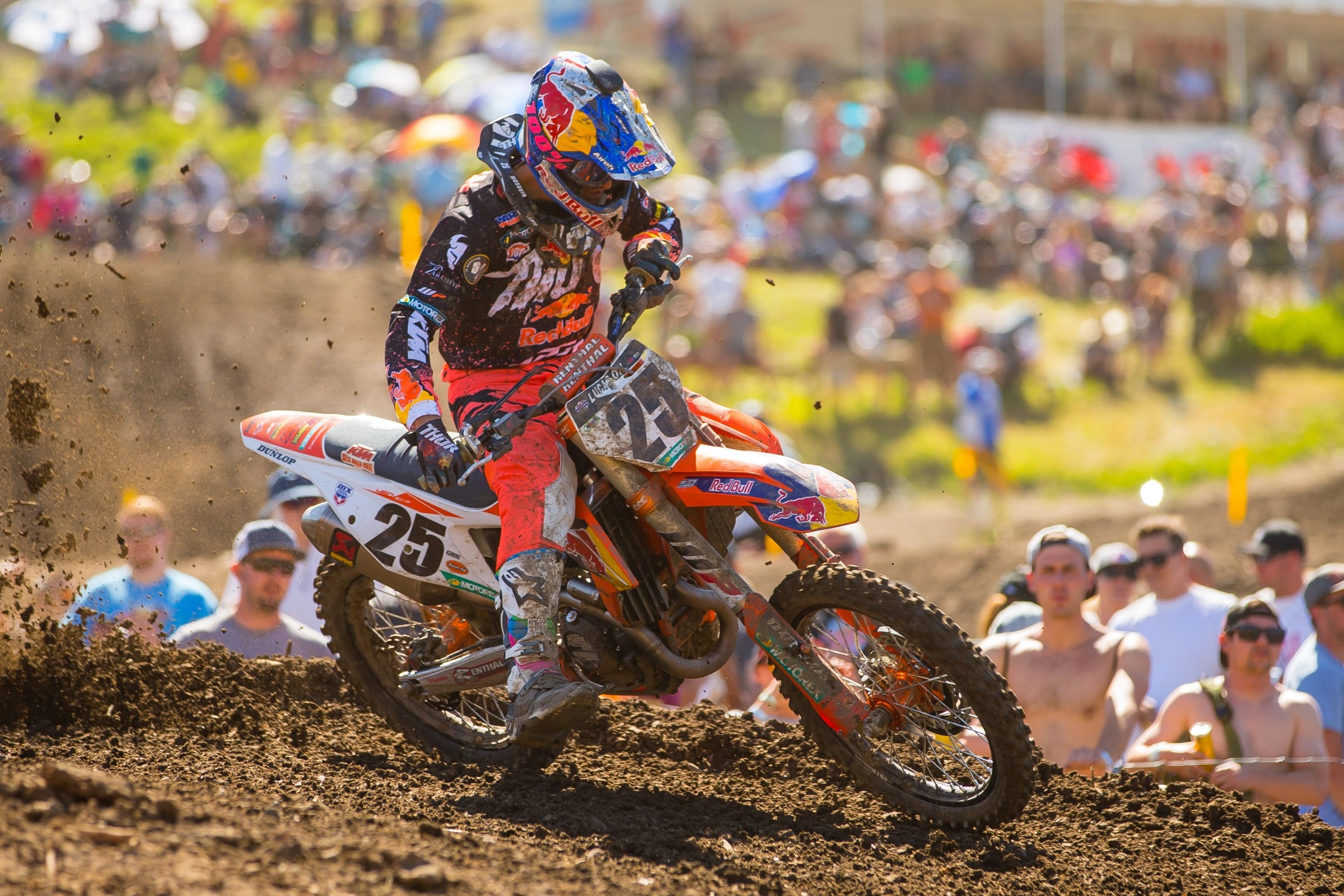 Eli Tomac has been soul-crushingly dominant this season, and so far he’s showing no signs of slowing down whatsoever. And other than a few mediocre starts, he hasn’t shown much weakness, either. As a result, he’s currently riding a three-round win streak, has been perfect in all six of the season’s motos, and leads Musquin by 28 points. Will the streak be broken or extended at High Point? —Aaron Hansel

Saying Marvin Musquin needs to bounce back might seem a little strong at this point, especially considering he’s beating everyone not named Eli Tomac in the championship, but he sure didn’t seem like himself at Thunder Valley, either, going 4-4 for fourth overall. Not the worst result, but it’s not what you’d expect out of a guy like Musquin. Good thing for him the series descends on the High Point National this weekend, a venue where Musquin was quite good during his 250 days. We’ll see if he uses it to his advantage to get back on the 450 podium. —Hansel

It’s weird to think Jeremy Martin hasn’t worn a red plate since winning his last championship in 2015, because, you know, it’s freaking two-time AMA National Champ Jeremy Martin, but he hasn’t. Not until last week at Thunder Valley, anyway, where won the overall and snatched the lead from Zach Osborne and Aaron Plessinger, who were tied in points. Afterward, Martin even said that finally having another points lead gave him goosebumps. He now leads the series by eight points over Aaron Plessinger; will that gap shrink, grow, or be eliminated at High Point? —Hansel

There are times when it seems the moto gods are determined to punish Joey Savatgy with a vengeance and malevolence that should be reserved strictly for serial bike thieves. That was certainly the case at Thunder Valley, where Savatgy battled hard with Justin Cooper in the first moto before finally taking the lead and riding off to what seemed like a sure win. Then, of course, his bike broke, transforming a mouth-watering win into a rancid DNF. To make matters worse, Savatgy followed it up by triggering a first-turn pileup in the second moto. The good news is the only direction Savatgy can travel this weekend is up. Look for a better showing from him at High Point. —Hansel

We’re three rounds into 2018 Lucas Oil Pro Motocross season, but the summer hasn’t even started yet for Mitchell Harrison. The Rockstar Energy Husqvarna Factory Racing rider crashed before Hangtown and suffered a minor AC separation, but he’ll be back in action at the High Point National this weekend. He hasn’t had the benefit three rounds of flow-finding racing, so don’t expect him to go crazy at round four. —Hansel

Justin Hill has never made it a secret that he prefers the bigger, more powerful 450F. "It's a thinking man's class, less hairball. Way more enjoyable," he told Jason Weigandt in February after an impressive 450SX debut in Tampa. With Phil Nicoletti off to Rockstar Energy Husqvarna and Justin Bogle still on the mend, Autotrader/Yoshimura Suzuki decided to move Hill up to the 450 Class for “select” rounds, beginning this weekend at High Point. “Justin has a tremendous amount of talent, and he has been working hard at increasing his intensity,” team manager Jeremy Albrecht said in a statement. It’s been a struggle in the 250 Class for Hill in the nationals—zero top-ten moto finishes through six motos—so we’ll see if the move to the 450 helps. —Chase Stallo

It’s quite fitting that Phil Nicoletti will trade one fill-in role for another—three rounds into the Lucas Oil Pro Motocross Championship! Five years after he became THE fill-in at JGR, Nicoletti will begin his Husqvarna fill-in role this Saturday at High Point. “I’ve been riding dirt bikes my whole life. It’s not really that hard to kind of switch motorcycles and kind of get the feel of it within a couple days,” he told Steve Matthes earlier this week. The week off surely benefited Phil and the team, as it allowed a couple extra days to adjust to the bike. Nicoletti has six straight top-ten moto finishes to begin the season with JGR—let’s see if he can keep it going on a new brand. —Stallo

Monster Energy/Yamalube/Star Racing Yamaha will get Frenchman Dylan Ferrandis back this weekend. It’s the first race for Ferrandis since the Atlanta Supercross in March, where he suffered a broken arm and broken teeth after clipping a Tuff Block on the face of a triple in the second main event and landed on the face of the third jump. Ferrandis had a positive debut in Lucas Oil Pro Motocross in 2017, winning two motos and finishing sixth in points. Ferrandis has spotted the field three rounds; we’ll see if he can return to the mix up front quickly. —Stallo

Traders Racing Yamaha won’t be running the entire Lucas Oil Pro Motocross schedule, but they will be at High Point tomorrow and will have Luke Renzland (250 Class) and Nick Gaines (450 Class) under the tent. In 2017, Renzland scored one moto top ten and finished 16th in points. The New Jersey native had a breakout year in Monster Energy Supercross, scoring his first career podium in Indianapolis. Gaines, who had two top-ten moto finishes a year ago, will be making his debut in the 450 Class. Can the duo jump in the mix for a top ten in their first race of the year? —Stallo

GEICO Honda will finally get Cameron McAdoo back this weekend. McAdoo has been hit hard by injuries in his first two years as a pro and has been out since March with separate hand and shoulder injuries. McAdoo raced just three rounds of Lucas Oil Pro Motocross in his rookie year in 2017, and these last eight rounds could prove pivotal for the second-year pro. Let’s see how he does in his 2018 debut. —Stallo