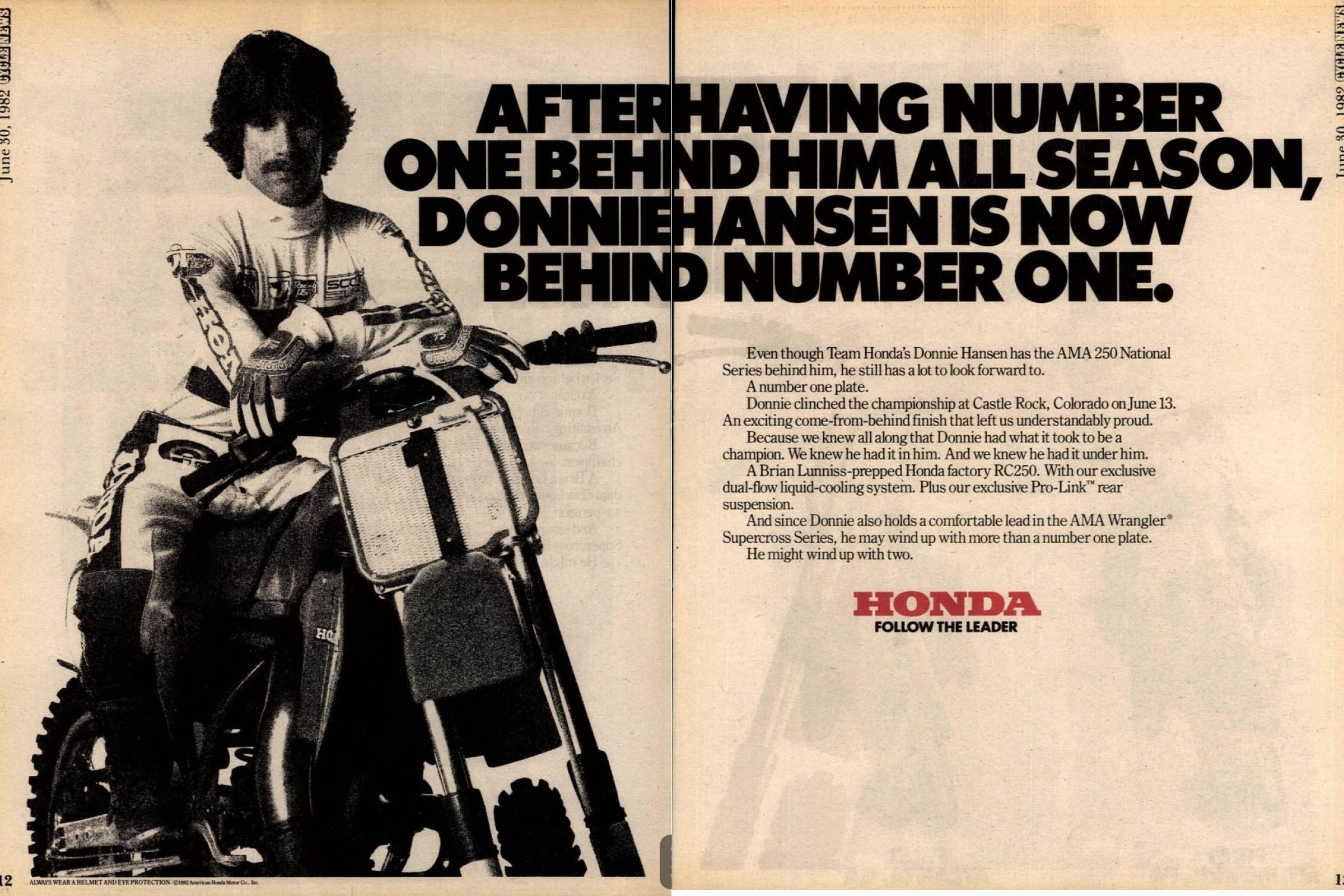 On This Day in Moto June 13

On a big and dramatic day in Colorado at the CDR Tech Track, the final round of the 1982 AMA 250cc National Motocross Championship played out. Team Yamaha's Rick "Too Hip" Johnson, Yamaha's 17-year-old sensation, seemed to have the title in the bag, but over-jumped a big downhill ski jump and collapsed the front wheel of his production-based YZ250. The title would instead go to Team Honda's Donnie "Holeshot" Hansen, who finished second on the day to Johnson's Yamaha teammate Broc Glover. It was the one and only AMA Motocross title for Hansen, who would also win the '82 AMA Supercross Championship, but suffer a career-ending concussion while preparing for the Motocross and Trophee des Nations in Germany. As for Johnson, he would win seven major AMA titles in his own AMA Motocross Hall of Fame future.

In the 500 Class, Honda teammates Darrell Shultz and Chuck Sun traded moto wins, with Shultz getting the overall with 1-2 scores to Sun's 4-1. Yamaha's Mike Bell would finish 3-3 for third.

On a parallel track to LaPorte's, "Bad" Brad Lackey was also in Europe, only he was racing the FIM 500cc Grand Prix series. Both Lackey and LaPorte were racing to become the first American to win an FIM Motocross World Championship. Lackey, riding a Suzuki in '82, had been on a decade-long crusade while LaPorte was there for his first year abroad. On this day, Lackey would finish 3-2 in Germany while his title rival and Suzuki teammate Andre Vromans went 2-4. The overall winner on the day was Honda's Andre Malherbe, who took both motos.

The diminutive Belgian Suzuki rider Gaston Rahier continued his domination of the FIM 125cc Motocross World Championship, winning his fifth GP in six rounds to date, this time in Finland. It was an important win for Rahier because the interloper from America, Team Honda's Marty Smith, had won the previous round in Denmark and appeared to be building momentum. But Smith, the two-time AMA 125 Champion, could not top Rahier, the reigning FIM 125 World Champ, in their second-moto duel, and he failed to score points in the first moto.

Team Honda's Ezra Lusk proved to be the fastest in the sand at Southwick, going 1-1 to top local hero John Dowd in the 250 Class. Dowd held a 3-2 at the end of the day, topping the 2-3 of Mike LaRocco of the Factory Connection Honda team.

In the 125 Class, Splitfire/Pro Circuit Kawasaki's Ricky Carmichael kept his perfect season going with a fourth straight win to start what would be his third championship season in the 125 Nationals. FMF Honda riders Brock Sellards and Tallon Vohland were second and third.