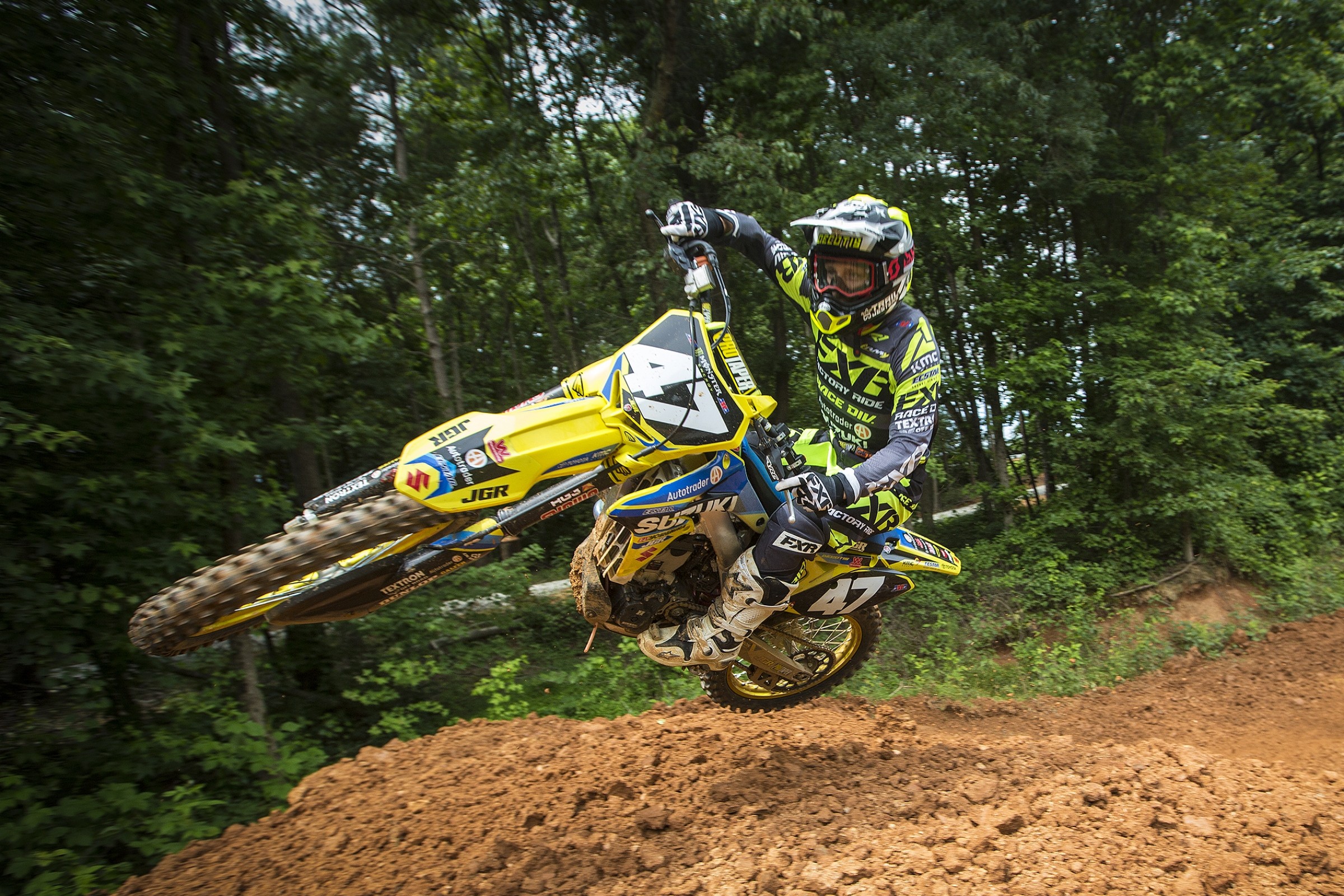 Watch any national-level pro log laps by himself and you’ll be impressed. These dudes all rip! I stopped by the JGR Suzuki track on Monday afternoon and saw Jimmy Decotis logging a moto on his RM-Z250. To watch him log laps alone, you’d swear the dude was coming off of a 1-1 the previous weekend. Pros are pros. They’re really good at what they do.

But Jimmy isn’t even racing yet. He feels he needs to get faster and stronger before he can line up again following a back injury suffered at the Daytona Supercross. He has his comeback race scheduled for Muddy Creek, so he has two weeks to try to get his full race fitness back for that event. When his 35-plus-two was over, he was spent, so I gave him ten minutes to just sit in a chair and collect himself both mentally and physically. Then I fired up the recorder.

Racer X: In the hurt locker, Jimmy?
Jimmy Decotis: It’s tough, and it’s hot down here and humid. Plus our track is pretty slow with a lot of turns, so it feels like you’re in a sauna. I’ve got to make the most of it; have to do two 30-plus-twos four days this week, so I’m looking at eight 35-minute motos this week. It’s tough, but it’s just part of it, it takes time to get that fitness back on the bike. I did everything I could, cycling wise and in the gym, but now I have to do it on the bike. Then I can just go into my first race at Muddy Creek and just ride like I know how. I have a pretty good idea of where I’m at. I’m really hoping to get some outdoor results.

What’s the biggest weakness right now? Just physical pain from the injury? Staying mentally focused the whole way? Cardio?
You just get so fatigued and so hot. My back does give out a little bit. Southwick will be the hardest on my back because you have to stand up so much; our track here is kinda rutted so you have to sit down a lot. Mainly, it’s the heat. If it weren’t hot and humid, I think I could crush it the whole moto. Right now I fade off a little bit, but I’m actually further ahead than I thought I would be right now.

Any testing, or just riding?
No real testing. We made a few changes on the shock and things like that, but I feel like I need to get a little faster before we really go testing. And I’m one of those guys where I don’t need to change a lot. As long as I know what the bike is going to do, I’m comfortable. We’ll probably test a little bit, but right now I’m just trying to get to be the best I can be, speed-wise, and then we’ll do some testing.

How do you know when you’re at that point?
You can feel it, and also you can ride with other guys. Right now, I feel like I have to baby the bike a little bit. You know when you feel like you can be aggressive the whole moto.

Who are you riding with? Seems like a good crew around here.
Yeah, we just got Weston [Peick] back on the East Coast, so I get to ride with him, Enzo [Lopes], [Justin] Hill, [Brandon] Hartranft. I feel good out there right now—better than I thought I would. Realistically, I’d like to be in the top ten at the first round, Muddy Creek.

So you weren’t missing that one.
Well, I would if I had to. If I was not ready, I wouldn’t go racing. But if I feel like I’m the best rider I can be and if I can put on a show for those fans, I’m going to do it. I really like the Suzuki. It’s really stable and the way it feels in the turns, it’s a great bike. I don’t want to put too much emphasis on any one race, but it’s hard not to. Those fans are nuts! Last year I could feel it even on the parade lap. Everyone there was cheering for me. To put it on the podium there would be a great goal, but all I can do is all I can do.

Are you like the rest of the New England guys? Do you have a million career laps logged at Southwick?
Not really. I haven’t been home much the last few years, and when I was an amateur, the track went the other way. I wouldn’t say I have an advantage specifically on that track; just more the atmosphere. Also, guys like John Dowd or KJ [Keith Johnson] will help me out talking about lines. It’s more the mental side of it. When you hear thousands of people cheering for you and your tongue is dragging in the spokes, you just don’t give up. I remember racing New Jersey Supercross, and that’s not even my home race and the people were cheering so hard for me there. I was so amped up! It’s not like I have an advantage on a supercross track because it’s not normally there. It’s just all those people cheering you on helps you so much.

This is your first foray outdoors since the Lyme disease diagnosis last year. Any side effects?
No, nothing. I do need to be careful. I need to watch my recovery and get my sleep; if I run myself down too much, it will take my body time to recover. But a lot of my problems were with general fatigue and brain fog. I still don’t have that; I feel normal riding the dirt bike, whereas before, I’d have a good day or two and then the next day would be bad. The heat also got to me, too. To be able to do what I just did—two 35-minute motos with only 45 minutes in between, in this heat and humidity—that’s a lot better than where I was last year. I just need to be smart about recovery—if I mess that up, then it bites me in the ass badly.

What happened in Daytona?
I got a really bad start but I felt really good; passed like eight guys and I was about seventh. There was a dragon back there and I just was trying to get guys too fast. I went to tire-tap the dragon and I missed the tap. I almost saved it, and I was almost undecided if I should try to save it or just bail off. I tried to save it and I couldn’t. I should have just jumped off and I probably would have been okay, but when I tried to save it, my feet got caught and the bike just slammed me. When Doc Bodnar and Eddie Casillas got to me, I was tripping. I felt like I had pain with my kidney or liver or something—I didn’t think it was my back, I was afraid of internal bleeding. I was like, “Get me in the ambulance! Get me out of here!” I didn’t know if I was going to bleed out or what, I was stressed. Once I found out I didn’t have any internal damage, I felt better. When I found out I had a broken back, I was like, “Okay, that’s where that pain is coming from.” I’d never felt that before.

Super serious back injury?
They told me I was really lucky. I asked him [the doctor] to phrase that better and tell me why, but he really didn’t want to. He just said I was lucky. I think they’re worried that if you tell athletes too much, it will scare them away. I did what is called a transverse process, which means I completely tore the wings from one of the vertebrae. That’s the painful part; you tear all the muscles away. I still have to do some things in the mornings when I wake up, stretching and things like that. Of course, it’s scary when you’re talking about your back and your spinal cord, but I tell my family, even if I wasn’t racing, I’d still be riding the dirt bike for fun. So the risk would still be there. As long as I’m healthy and young, I might as well try and race. I think we’re all adrenaline junkies, anyway!

Had to be a bummer. Your season was going well.
It was probably the most devastating injury I’ve ever had. When I was younger, I wasn’t taking it seriously enough, but ever since I really got dedicated to the training, I hadn’t had a major injury in three years. This one was hard for me. I had promised a lot for the team, and I’m happy I delivered a podium to start the season, but I feel like I would have had a lot more, maybe even a win. Then the East Coast thinned out a lot. It sucks when you do good when it’s thin; everyone kind of takes that away, but you still build confidence if you get podiums or a win. Obviously, those top four or five guys that were still there were extremely fast, but I feel like I could run with those guys. I was bummed—watching really sucked. Sometimes, I had to just turn it off.