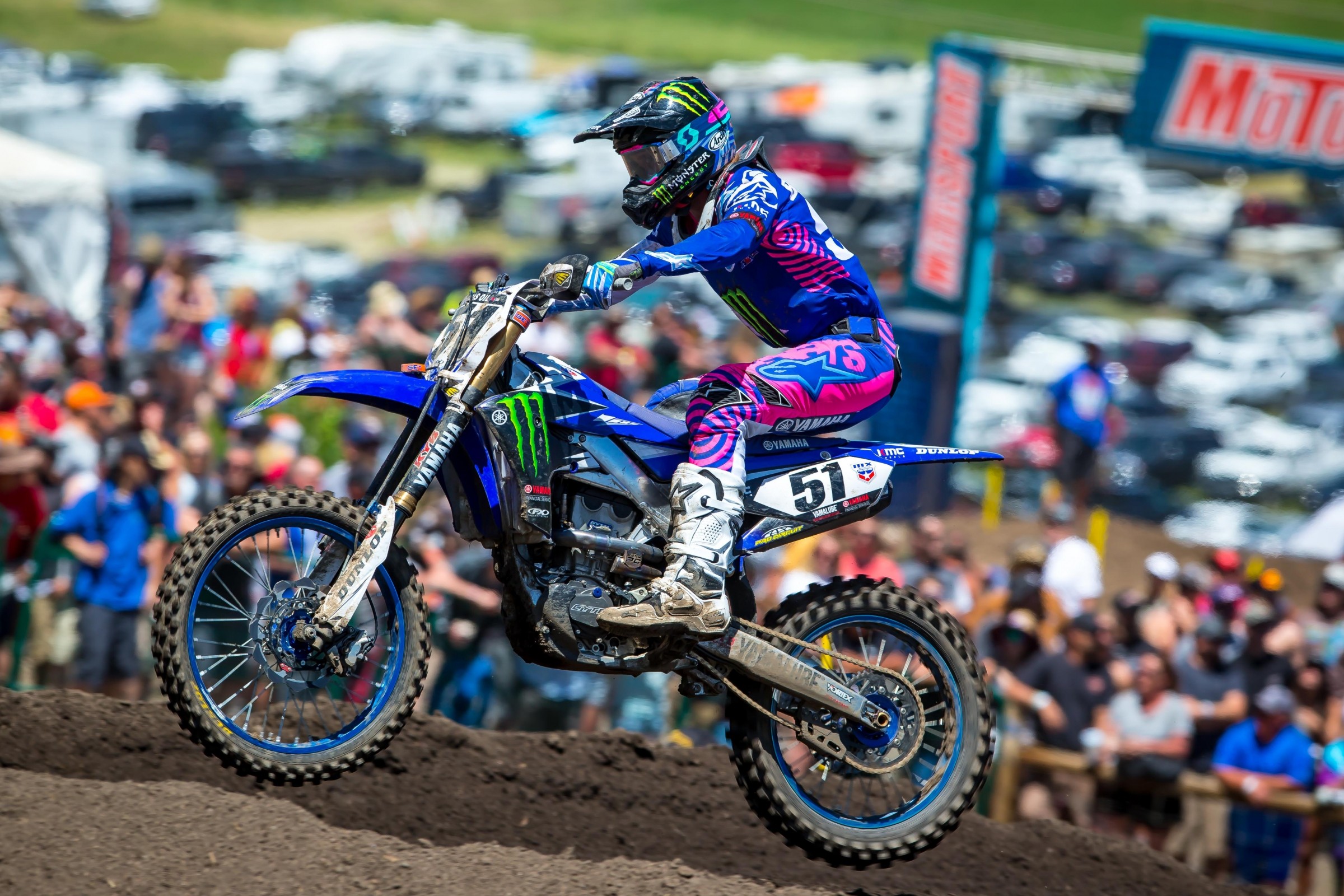 Between Justin Barcia and Phil Nicoletti

It was frustrating, to say the least. I was fast in practice, holeshot the first moto, led, then red flag. Didn’t get a good start, was trying to pass some guys and fell down. Rode that one out. Second moto holeshot, led some laps, crashed, then crashed again. It was frustrating. There were some good positives, but it’s like #$#QQ!&, you know? I rode good today. It’s just frustrating.

Racer X: But are you pumped to be riding good, though? Every weekend you’re in the hunt.
Yeah, it’s awesome. I’m definitely very happy with my riding; it’s good. We’re taking steps, too. The bike’s not fully where we want it to be. We’re not necessarily struggling, but we feel it could be better. We took a stab at something today that Alex Ray actually tested in California, and it was better. But we fix one thing, then we still need to take a stab at something else. We have an idea what to try next. It’s a new bike and it’s my first year on the thing. Just trying to make it better every weekend. Nobody has ever ridden it this fast outdoors [since the bike is new].

What did A-Ray find?
A link and a spring. It’s the same shock, just a different shock spring. We’re just trying to get it so it doesn’t move so much. I want it as stiff as possible and I want it to be plush. It’s like, uh, okay. But that’s what every rider wants. Right now, I think we’re on the softer side and we’re trying stuff. At Glen Helen we made a fork change, which was a step in the right direction. We have a week off to try stuff now and to think about today for motivation. I’m taking the positives out of it. I led laps and I’ll be back up there.

How’d you feel before that red flag? It didn’t look like Tomac was all over you.
Honestly, I feel like I could’ve won the first moto. I’m being honest; I’m not blowing smoke. At least I would have diced it up with him. Coulda, woulda, shoulda. I was riding good. We pulled like a ten-second gap. It was awesome! It just didn’t quite go my way today, unfortunately.

It was okay today; went 8-8 for eighth overall. Showed some speed in the beginning, but my start after the red flag wasn’t that great. Made a couple quick passes and got in there, but I struggled with some things, too. We have some things to work on this week. It’ll be nice to have a weekend off. I haven’t had much time on the 450 to test. This week will help with that, and I’ll enjoy not traveling.

What was your thought when you saw that red flag come out? You were running third.
It’s always a bummer, unless you’re doing bad and you get a second chance. If a guy is down hard, you don’t know what’s wrong…. If it was me and I needed help, hopefully they’d make the right judgment call. I think it was Chizz [Kyle Chisholm], and he got up right after. I don’t even know. It was a bummer, but it is what it is. I just struggled a little bit today, but there were some positives to take out of it.

You’ve been top-ten three weeks in a row now. Would you have been happy with that coming into the season?
Yeah, but it’s hard because the class is kind of weak at the moment, so it’s like, “Eh.” I’m the last guy of the factory bikes, and there’s a gap after that. It’s been rough, Hangtown and Glen Helen, but this last week at Thunder Valley was nice. I could actually get up there and run with those guys a little bit. It’s refreshing. We’ll do some testing this week and go from there.