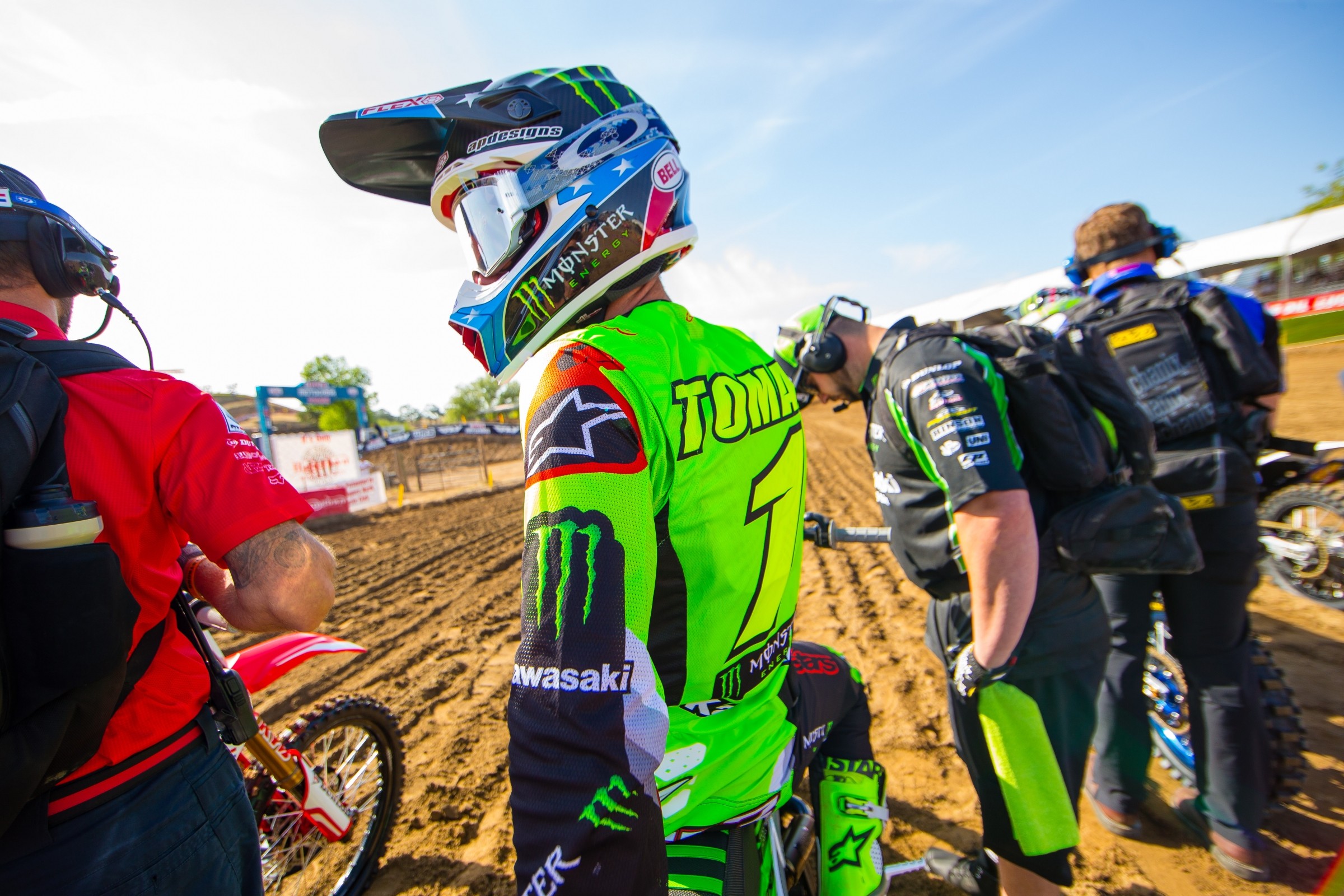 Dominance vs. the Uncontrollable

Just like last year at Hangtown, Eli Tomac was dominant in both motos. But, as we’ve seen in the past, sometimes that’s not enough to guarantee a points lead; in motocross, plenty of weird things can happen—like the freak incident at Glen Helen last year that left Tomac with no front brake in the second moto. It’s not the only time this type of thing has happened to Tomac before, either. In fact, the unexpected has occurred regularly enough we’ve almost become accustomed to him being forced to dig his way out of substantial points deficits. Might this finally be the year he doesn’t find himself, shovel in hand, feverishly digging away early in the season? —Aaron Hansel

Okay, so Justin Cooper isn’t a complete rookie because he raced three rounds of Lucas Oil Pro Motocross at the end of 2017, but this is his first full season and he’s got plenty to learn. That said, he’s been garnering a lot of attention for his pre-season lap times, and at Hangtown, he even led laps in the first moto before taking fifth. He wasn’t quite as good in the second moto, but 5-9 for fifth overall still isn’t bad. One issue? His trainer told us that Justin was so nervous on race day that he didn’t eat enough! We’ll see if he makes any adjustments for Glen Helen that yield a better result in the second moto. —Hansel

In the past, we’ve seen rookies have some incredible debuts at Hangtown. Josh Grant, Eli Tomac, and plenty more come to mind. Maybe that’s why nobody has made that big of a deal about Garrett Marchbanks’ tenth overall, via 12-6 moto scores. Twelfth isn’t bad at all for his first moto, but to come back in the second moto and improve that much, not to mention being the best Monster Energy/Pro Circuit Kawasaki finisher of the moto, is extremely impressive and makes us wonder what kind of heat he’ll be packing at Glen Helen. —Hansel

Nobody knew just what to expect from Ken Roczen at Hangtown, including Roczen himself, who said afterward he and the team were “wingin’ it.” Well, now we’ve got a better idea. Pain, fatigue, and a second-moto bike change that didn’t work well all played a factor in Roczen’s 6-16 (11th overall) day. The good news for Roczen is, he was great in the beginning parts of each moto. Afterward Roczen said he’s expecting big gains over the next several weeks. Is it too early to start looking for improvement at Glen Helen? —Hansel

If Jason Anderson was suffering from a championship hangover at Hangtown, he did a pretty good job of hiding it—for awhile. The Rockstar Energy Husqvarna Factory Racing Rider looked frisky and even led laps in both motos. Then he faded back a bit in both, eventually going 4-6 for fourth overall. This by itself is pretty good, but after leading laps, a rider of Anderson’s caliber is not going to be satisfied by finishing off the podium. His speed was there early, though. With another week of moto under his belt, can he put it on the box this time? —Hansel

Chance of a Lifetime

When the unfortunate news trickles down that a rider will miss a significant portion of time due to injury, fans often clamor to give a privateer the bike. While on the surface it’s a nice gesture, it isn’t always that simple. So, kudos to Monster Energy/Factory Yamaha for signing Alex Ray to a three-race deal (as of now, the team will reevaluate after High Point) to fill in for the injured Cooper Webb. Ray, who spent supercross with CycleTrader.com/Rock River Yamaha, said the biggest thing this weekend is staying calm. “Coming into the weekend, I’m just trying to keep my nerves calm because this is a huge opportunity for me to race with the Monster Energy/Yamaha Factory Racing team,” he said in a team statement. “I’m just hoping for two solid motos and to stay off the ground!” You have to love A-Ray, who is known for just “sending it” and getting “catawampus,” saying he hopes to just stay off the ground in a press release. Let’s see how he does this weekend. —Chase Stallo

As Jason Weigandt laid out prior to the season, the storyline entering the 250 Pro Motocross Championship was simple: Osborne vs. J-Mart, and could anyone get in between? The veterans have combined to win three of the last four 250 Class Pro Motocross titles and went 1-2 in the series a year ago. Round one went to Osborne, who had an incredible day at the opener, with J-Mart going 2-2. Alex Martin, Jeremy’s older brother, stayed close in the second moto, and Aaron Plessinger had a nice day in third overall. Yet it was clear Osborne and Martin had everyone else covered last Saturday. Will we see another 1-2 performance from the champs this weekend? —Stallo

You never want to overreact after leaving the first round. With such a short turnaround time between Lucas Oil Pro Motocross and Monster Energy Supercross, there are just too many variables in place to draw a clear conclusion after Hangtown. With that being said, Joey Savatgy would love to do Hangtown over. The Monster Energy/Pro Circuit Kawasaki rider finished a disappointing seventh overall and said this week in a team statement that he knows he should be better. “Last week, we knew we could have been better, and I think we can make it happen this weekend,” he said. “We’ve tested at Glen Helen and know we have what we need in terms of the bike, so now it’s up to me to make it happen and get back on the podium.” Can he rebound from the opener? —Stallo

One of the most overlooked rides from the opener was that of Benny Bloss. The 2015 Horizon Award winner charged from 30th following a crash to tenth in the first moto and then passed Jason Anderson late in the second moto to take fifth. Bloss has only finished better than seventh once in his career—a fourth overall at Unadilla in 2016. The door is certainly open for more top finishes, so we’ll see if he can back it up this weekend. —Stallo

Nerves. Pretty much every rookie making their pro debut last weekend mentioned being nervous. That’s expected. Garrett Marchbanks was the best of the bunch with a tenth overall finish. Brandon Hartranft and Enzo Lopes also had good days. Throw in Jordan Bailey and Jake Masterpool (who competes in the 450 Class), and we had a big rookie class on track at Hangtown. With the opener behind the young guns, will we see more improvement on Saturday? —Stallo