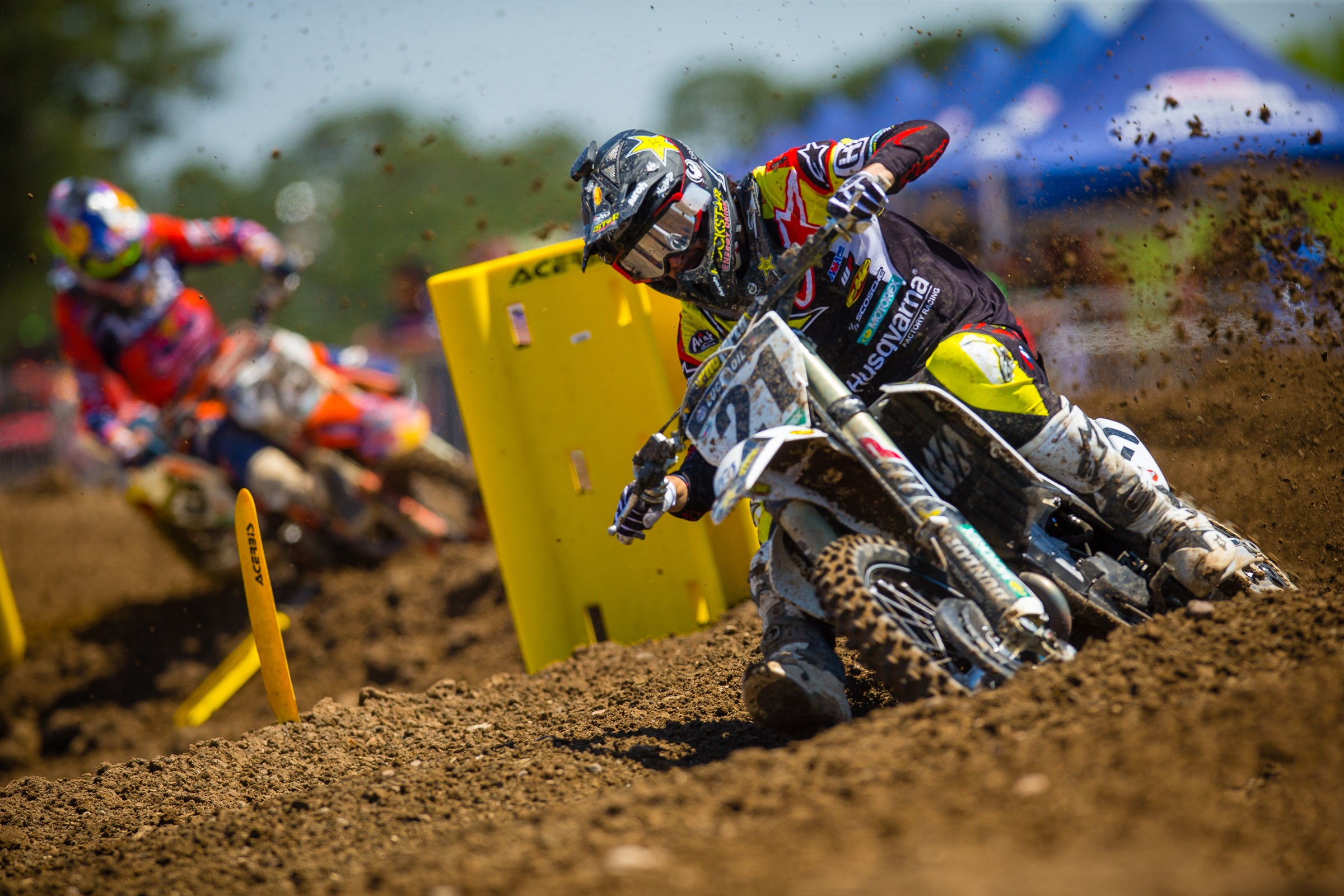 The first round of Lucas Oil Pro Motocross is in the books, and we pretty much picked up right where we left off last year. The defending champions in both classes, Eli Tomac and Zach Osborne, both went 1-1 on the day in a pretty dominating fashion while Marvin Musquin and Jeremy Martin were both able to go 2-2 for a solid start to the motocross season.

We also got to see some riders return from injuries that happened during the supercross season and some rookie debuts, which always bring a breath of fresh air after a long supercross season.

Let’s dive into the lap data to figure out how these races at the season opener were won and lost with this week’s Sign of the (Lap) Times. First, our traditional lap time charts.

After having a decent battle in the first moto with Musquin but ultimately finishing with a comfortable lead, Tomac had to work a bit harder for his win in the second moto. After getting a so-so start, he tipped over in a corner while working his way through the pack with Musquin. After going down, he put in some furious laps, cutting three to four seconds into Musquin's lead. He started the race in tenth place, crashed shortly after, and by the ninth lap, he was in first. Bonkers.

After the race, Tomac commented on how he was able to log his fastest laps after his tip-over. He said, "I was comfortable. I was able to just kind of keep creeping up the pace. There was only one option, and that was to start pinning it and just try to catch back up."

When Tomac ran his 2:19.668 on the eighth lap, he was able to cut 3.39 seconds out of Musquin's lead. Taking a look at the segment times for that lap, Tomac wasn't really making massive gains in one particular section; he was simply faster everywhere. We'll see if Musquin can find some extra speed this weekend on the hills of Glen Helen.

Two riders that many were curious to see how they performed were Jason Anderson and Ken Roczen. Anderson was dealing with a serious supercross championship hangover after winning his first 450SX title, and Hangtown is always a hard race for riders who have just won the supercross championship. Ken Roczen injured his right hand back in February, so he barely had any time on the bike before lining up at Hangtown. Not the best recipe for success.

Both riders started the motos well, but faded hard at the tail end of the second motos. I plotted out their laps for both motos to see how much they struggled in the second motos, and it's pretty apparent.

First, take a look at Roczen. The first moto actually went pretty well. He was able to maintain consistent laps all the way to the end. He even started his second moto well, but a bad bike change and fatigue took its toll starting on lap six. Our own Aaron Hansel caught up with Roczen after the race, and despite the poor finish, he's trying to keep a positive outlook on his start to the season.

Racer X: You were up there in the beginning, so yeah, it doesn’t seem like speed is going to be the big issue.
Ken Roczen: Exactly. We did a change between the motos, too, and it wasn’t what I really wanted, actually. When something is bad, you can do a start and do a few laps but eventually things get out of whack and you’re going to have to slow down. The last thing I want to do is ride over my head and throw it away. I just wanted to make it through this one and make it out safe.

Happy, sad, or in-between on your day?
I think I have to be happy, but I’m so competitive it’s tough to leave saying this was awesome. I could have done better. But it’s been so long since I’ve raced, five races in the last two years, and it’s just not enough. The hard part is, I was used to winning before, and I still want to win. I’m far away from it right now.

Anderson's drop-off wasn't nearly as drastic as Roczen's, but you can see on the final four laps of the second moto, he really drops off the pace. Those last four laps were pretty crucial for the #21 as he got passed by Blake Baggett and Benny Bloss and dropped down to sixth place.

Hangtown was also the first round  of the 125 All Star Series, and Kyle Scott and Simon Cudby were able to deliver some pretty sweet video coverage.

The relatively unknown Aiden Tijero laid the smackdown on former pros like Ryan Villopoto and Wil Hahn to come away with an easy win.

I decided to put the timer on Tijero to see how his lap times stacked up against the 250 Class, because who doesn't love a good 125-vs.-250 debate? Since the 125 riders weren't riding with transponders, I had to time Tijero manually. I timed each riders' third lap and took the average of those times. It's not perfect, but it's close enough.

As you can see below, he wasn't anywhere near Zach Osborne's times to start the race, but he was comparable to 20th-place finisher Martin Castelo. Castelo's first lap was way slow due to having to battle other riders after a poor start, but after that, they are pretty comparable. Obviously, this sample size is too small to draw any firm conclusions from, but Tijero is definitely quick on a 125. How do you think he would have done had he been racing in the 250 Class?

How would Aiden Tijero have finished in the 250 Class?