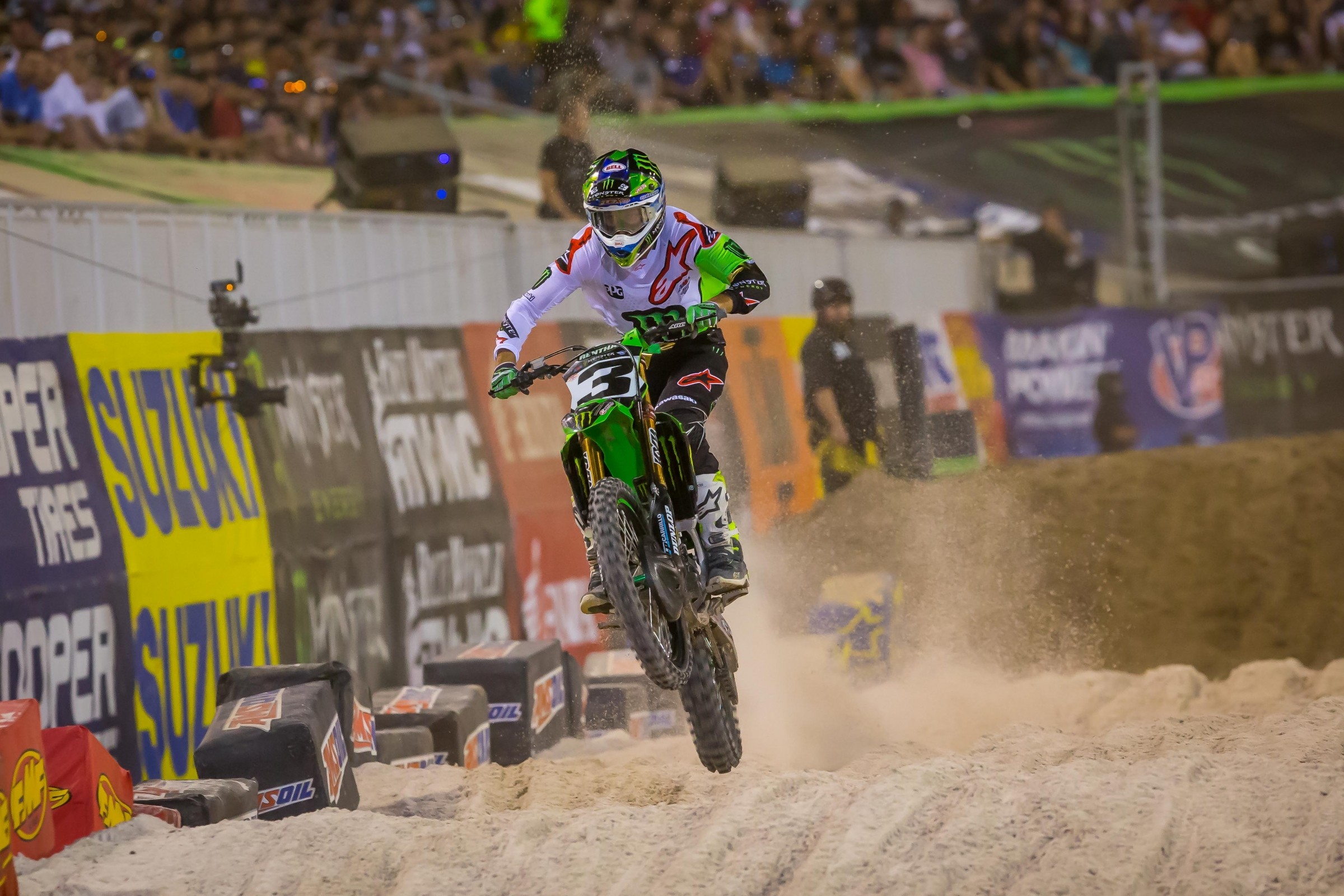 Racer X: Take us through the night, the main event. The track was pretty tough. For 20 minutes and one lap I’m sure it got pretty difficult there near the end to just keep focused and keep going. Just kind of take us through it.
Blake Baggett: It’s Vegas. It’s nothing like the strip. It’s not a party out there. It’s gnarly. It’s pretty tough. It’s hard-packed, slippery. I just couldn’t hang pace with these two guys. They were just going a little bit quicker than me every lap and I just tried to be consistent, keep it on two wheels, and get another third place. Of course, I wanted to get a first or a second this season but came up short, so add another third to my list.

Marvin Musquin: Like Blake said, it’s Vegas. You know it’s going to be hard, slippery. I knew it was going to be a tough main event. The heat race was actually pretty good. It got even harder and more slippery for the main. My start was awesome, but Eli was a little bit better and we were first and second. My goal was just to keep charging and to keep pushing. We both made mistakes and we pushed hard. Came home with second. I made a mistake with the lappers the rhythm before the finish and definitely lost the contact with Eli. After that, the gap stayed the same pretty much until the checkers. But I gave my best. On a track like that, I improved so much from last year. Really proud about it.

Eli Tomac: It was tough. Like these guys said, normal Vegas. Dancing in the whoops almost every lap and trying to decide whether or not you’re going to skim them or jump them. Just going through our whole day, our starts were on point the whole time. The heat race start was almost too good. I overshot the turn there, and in the main it was just right. Overall happy on the way we rode and the way things finished out here. But I had a really big moment in this rhythm section in that main event where I probably shouldn't have rode it out, but somehow did.

Marvin, you might have touched on this when you mentioned a lapper, but for a while it looked like you were really close to Eli, and then you maybe dropped back a bit. Then you got close again. Can you kind of talk about what all was going on then?
Musquin: Yeah, like I said, I was charging. To be in that position and to be able to push the limit like that and to follow Eli, it was actually fun. Going out of the stadium, it was so much high speed. I was actually doing pretty good over that sand section and wheel tapping and sending it. That ski jump was a little crazy. It was such a big jump and a big impact on the landing. I was pushing hard. Then I made a mistake going out on the three-three in the rhythm and definitely lost the contact. A little bit of a bummer because I wish I would have kept putting the pressure until the last lap, but it didn’t happen. But I gave my best. It was definitely, like I said, and they said, a tough track. I’m happy that I rode like that on those conditions.

Eli, coming out of the sand section you were hopping over that jump. It looked incredibly dangerous. Do you weigh the risk versus the reward when doing something like that?
Tomac: Yeah, I did it only twice, I think, in the middle there, just jumping over that last wall. That thing was honestly kind of scary to hit how fast we were going into it. When I was able to get that little hop, I almost thought it was safer than how high speed we were hitting that ramp. That’s why I actually stopped doing it after I did it a couple times. I was like, no way.

Eli, you were in super supercross title drama last year, so probably focused on supercross right till the end. Have you gotten a little more head start on motocross this time, because the points were out of reach indoors?
Tomac: Yeah, a little more head start for sure. It’s another year on a motorcycle, and ended with a good base last year. We’re healthy. There’s nothing nagging. Should be good to go.

Blake, you had a wrist injury at Atlanta and your results kind of tailed off, and then it’s definitely gotten better at the end of the year. What’s the status of that injury?
Baggett: Way to put it pretty blunt. You just could have said that I wasn’t doing good.

Tailed off is better than horrible.
Baggett: My wrist is wounded. It’s the card I’m dealt with. I got a fused wrist and my thumb is held together by some screws that I had after outdoors last year put in it to hold it together. Any time I jam it or go down on it, it hurts for a good solid month. It’s tough to train during the week and ride with it, but it’s motocross.

Marv, you ended up being still in title contention this week, which you might not have expected. Jason had some problems last week. Anything different in your preparation or even your mindset today thinking you could actually win the championship today? Was that running through your mind?
Musquin: Yeah, for sure. If I didn’t, that would be weird and not normal. Definitely, I didn’t go to school too much, but I knew I had 14 points back, and the math was actually not too hard if anything happened. But racing is crazy. Anything can happen. It made it really interesting for the fans, I guess, and everybody. Definitely an up-and-down season, but we say that so many times. Try to be more consistent next year. But like I said, we made a lot of progress in the last few rounds. We were able to fight for the win, so that’s really important. Looking forward to the future.