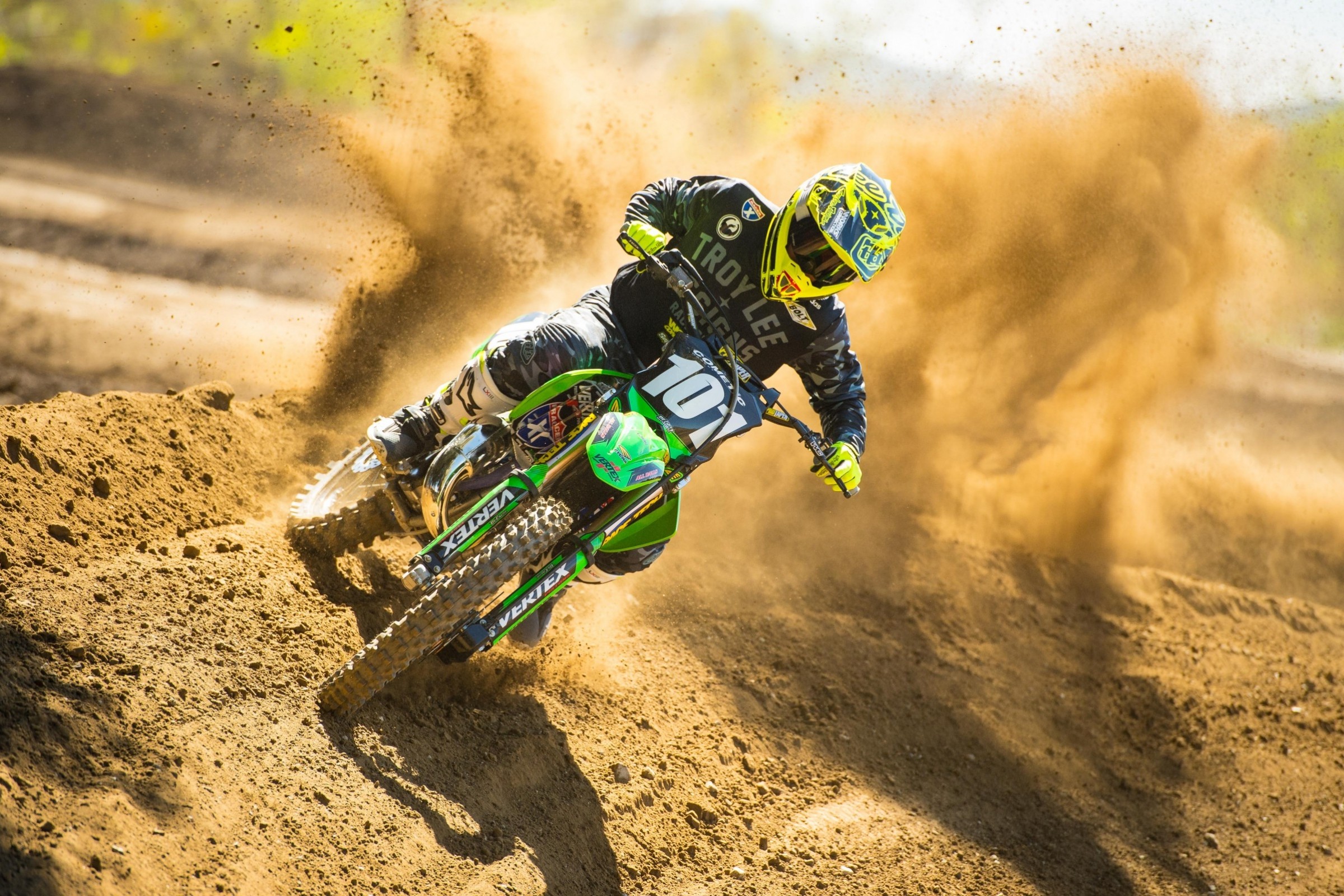 I am sure that along the way, I missed an article or 12 about Justin Brayton and the team, personalities, bikes etc.... Several races ago, a restart was needed and I saw Brayton kickstart his Honda. The 2018 Honda 450 bikes are electric start, correct? So, that leads me to ask of the year of his bike and of the lack of electric starting. Thanks for enlightening me, as I am in the HEINZ category, HEINZ as in 57 years old and missing some memory brain cells. And as far as your TLD gear that you mentioned in your column and what you do with your gear, such as auctions and fan requests for a signed jersey....I formally request a signed jersey of yours to go with the old-school ones I have from years gone by...Ward, Schmidt, Chicken, Cooper, Dowd, AJ Whitting, Dr.D , Holley and others from that era. Your jersey would be in great company.

Thanks for the great column!

In 2017, the Smartop/Bullfrog Spas/MotoConcepts Honda guys put 2016 bikes under Vince Friese and Mike Alessi because they could get a better deal on them, and, initially, there weren’t enough parts for the new bike to support all the riders who wanted them. Brayton actually worked as a test rider for the ’17 Honda, in a way, helping develop it throughout last season. With Brayton, they found a good setup, and Friese and Jake Weimer jumped on the new-generation bikes for this season. Brayton could have switched to electric start this year, but he actually likes the bike better without it. The teams says they save a few pounds by removing the battery and electric start equipment, and Brayton likes the reduced drag and engine braking that comes from removing the parts associated with battery charging and such. As far as jerseys go, I tell everybody the same thing: Make a donation to Road 2 Recovery for $50 or more and then send me a SASE with the receipt and I’ll send you a signed jersey. Hit me up at ping@racerxonline.com for more details.

Anderson getting penalized for coming back on the track after losing five positions is just another example of “who the hell is running this show?” We have seen time and time again penalties that vary based on interpretation, or lack thereof. In the very same race, Marvin went out of the sand, held the throttle wide open on the nice brown dirt, re-entered the track at the end of the sand, and even knocked a Tuff Block on to the track…. Faster? Yes. Safer? No. Penalty? No.

Two races ago Eli crashes and sits on a Tuff Block for ten-plus seconds. A track worker picks up his bike, gets it in neutral, holds it up, and even starts it (if memory serves me correctly). He re-enters the race and gets points. Outside assistance? Yes. Penalty? No.

And there are more of these!

Do you see a third party coming in to make consistent decisions? Or are we at the mercy of a dude(s) and how they feel at the time? They subbed out the drug testing part, so why not have another impartial party hand out penalties?

The inconsistency has been frustrating, and some of the calls, like Anderson’s penalty recently, are total head-scratchers. But who are you going to hire to come in and make those calls? The AMA is the right organization for the job; they just aren’t doing the job well. And I don’t care what the rules are as long as they are clear-cut and you hold every single rider to the same standard. They don’t seem to do that.

In their defense, there is gray area in certain situations. Do you fine Musquin for riding too aggressively last weekend, or was that just an aggressive pass? You could pull five people out of the stands and you wouldn’t be able to get them all to agree on it. In the Tomac crash, the track worker may have picked up the bike to get it out of the race line as a safety issue. If he started it, well, that’s another story. But sometimes we don’t see everything that happens and the folks making the calls do, so we need to give them a little grace.

People piss and moan about WADA, so I don’t know why you’d want another third party, which could know nothing about motocross, coming in to make decisions about our sport. When the AMA makes a bad call, let them know about it. When they get it right, let them know that as well. When all is said and done, your letters and messages of concern won’t have done anything whatsoever, but maybe you’ll sleep better at night.

You have to be smiling about the 125 All-Stars series that is joining the pro Nationals this summer. You’ve ranted and raved and even got on a soap box on the Washougal podium a couple years ago to defend the quarter-liter machines. Is this the beginning of a resurgence? Will the rest of the manufacturers get back on board with 125 production? Are you racing these events? Can’t wait to hear the sound of 40 125s ripping again!

I’m super pumped like Ryan Dungey, two thumbs up like Travis Pastrana, and one apathetic half-smile like Ryan Villopoto. Speaking of Villopoto, he might just show up at one of these and race a YZ125 that Mitch and the Pro Circuit boys built him; that would be cool. Jimmy Albertson is racing, snowboard/mountain bike icon Shaun Palmer has sent in his entry, and I’m sure a long list of local heroes are prepping for their shot at glory as well.

Look, I’ve been banging the 125 drum for a while now, so it feels pretty good to see it get some traction. Joey Lancaster, the promoter of the original 125 Dream Race in Washougal, deserves a lot of credit for doing the legwork on all this, despite the fact that he isn’t involved in this All-Stars series. Joey’s event at the end of summer is still the must-race event for 125 fans.

What’s great is that there is no money on the line for this series; it’s just for fun. That makes it feel a lot like the way racing was when I was a kid. Hopefully we get some old pros, some fast kids, and the local guys who can still go fast, because that’s what it’s for. I’ll see you at Hangtown.