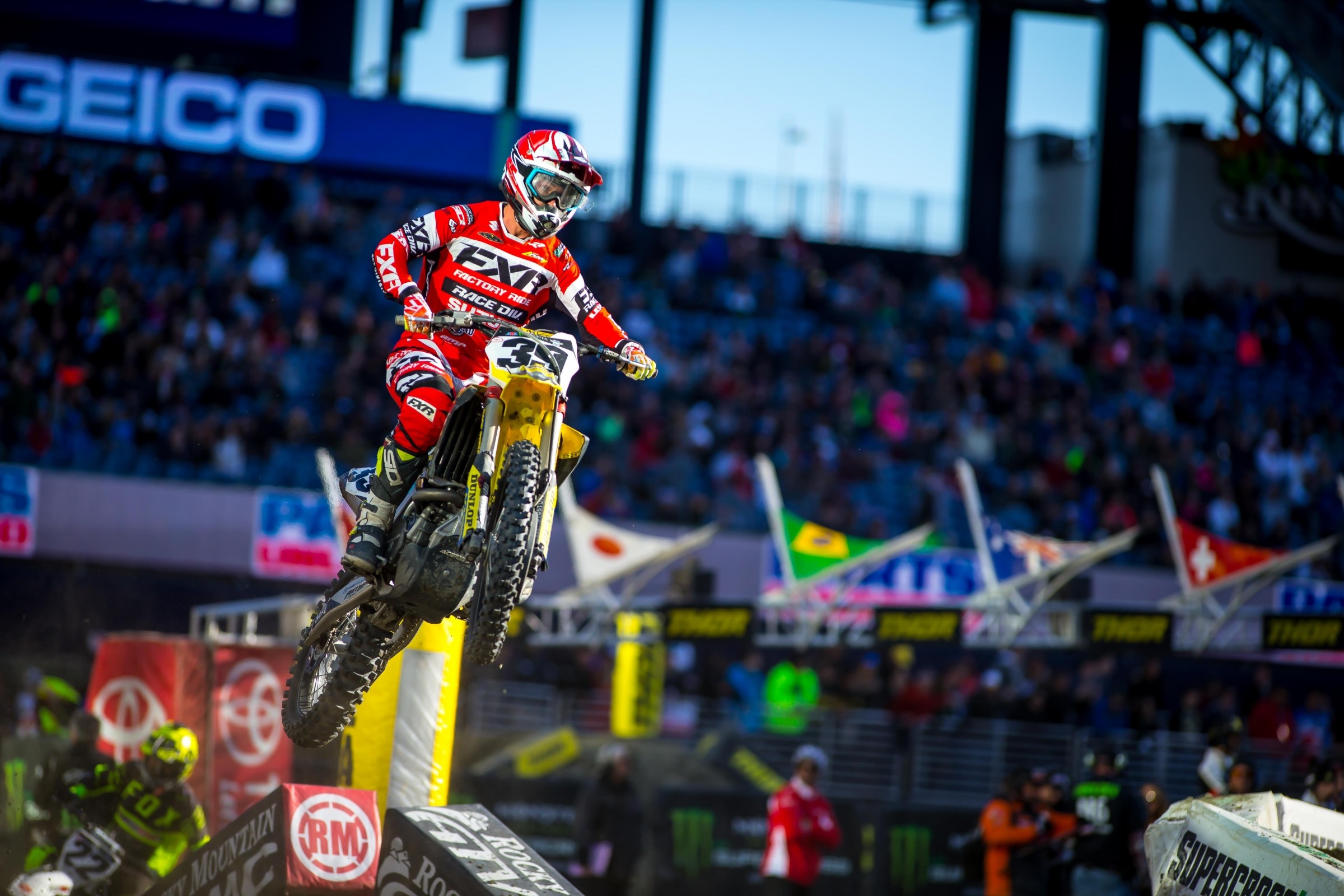 Comment: Bisceglia hasn’t raced since breaking his hand in Atlanta. He’d hoped to be back for Salt Lake City, but it didn’t work out.

Comment: After being sidelined with an arm injury in San Diego, Bogle has been cleared to start riding beginning next week. The team says he’ll take it easy and work his way from a turn track up to the motocross track when he feels comfortable. At this point, there is no exact date for his return.

KYLE CUNNINGHAM — TAILBONE, SHOULDER, BACK | IN

Comment: Cunningham has been racing with a fractured tailbone suffered in St. Louis. He crashed hard in Foxborough and banged up his lower back and shoulder. He’s been doing therapy all week and plans on giving it a go in Salt Lake City.

Just wanted to give everyone an update. Made a mistake and lost drive off the triple which most of you saw. Pretty bummed with the crash after all the changes we had made over the weeks and putting together a ride more like I’m capable of. It’s racing and happens though. Fortunately as bad as it was I walked away. Definitely have a few things that are really sore but at this point everything seems to be okay. Going to get back home get rested up and on to salt lake next weekend ?? @hepmotorsports @suzukicycles @snuffyracing

Comment: Enticknap broke his collarbone in Minneapolis.  He hopes to race Vegas.

Comment: LaMay will miss the rest of the supercross season after sustaining a concussion during practice in Foxborough.

Well looks like my sx season has came to an end, last Saturday in Foxborough I crashed in practice and hit my head which resulted in a concussion. I feel that the best thing for me at this point is to rest, let my brain heal up and focus on the Outdoors coming up quick. I have had a decent season so far and can take a lot of positives moving forward. I’m very happy with my team @tpjracing and all our sponsors involved with my program. Thank you to everyone who supports me and believe in me, Look for an even stronger #alaskanassassin when we go racing outdoors!

Comment: Martinez will miss the rest of Monster Energy Supercross due to a split depression plateau fracture of his tibia.

Comment: Noren is out for the year with a torn ligament in his hand as well as some nagging knee issues.

Comment: Webb will miss the final two races with a fractured tibia suffered in Minneapolis. There is no timetable on his return. In the meantime, Josh Hill will fill in for him.

Comment: Weimer will be back in action after breaking two metacarpals in his hand in San Diego.

Comment: Ferrandis broke his arm and a few teeth in Atlanta. He’s hoping to be back for Lucas Oil Pro Motocross.

Comment: Martin fractured his wrist in San Diego. He’ll be back for Lucas Oil Pro Motocross.

Comment: McAdoo won’t be back for Hangtown, but he will return at some point in the Lucas Oil Pro Motocross Championship. He broke his shoulder blade in a practice crash.

Comment: Oldenburg tore his MCL and ACL recently while practicing. There is no timetable on his return, but he’ll definitely miss the rest of supercross.

Tough pill to swallow.. it’s been a rough couple of years to say the least.. Had a practice crash last Monday which resulted in a torn ACL and MCL.. Doing everything I can to get back to 100%! Can’t thank my team enough for sticking behind me and being supportive in this tough time! Tough times don’t last, but tough people do!?? @starracingyamaha

Comment: Peters crashed on a patch of ice in Minneapolis outside the stadium and injured his knee. He traveled back to the JGRMX headquarters in Huntersville, North Carolina, on Sunday for evaluation. It was determined that the Suzuki RM-Z250 rider tore the ACL and MCL in his left knee. Peters raced in Foxborough, garnering a third, and will likely race in Vegas.